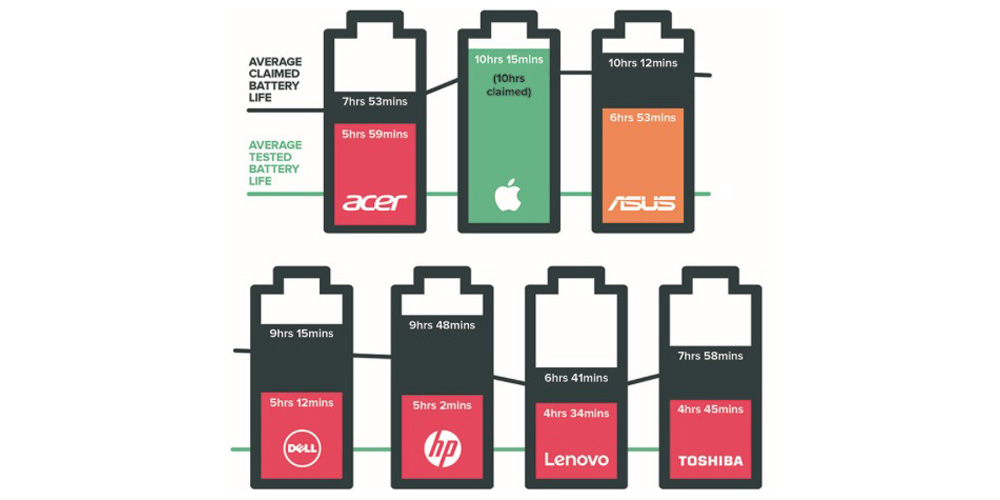 Which found in tests of 67 laptops that Apple was the only manufacturer to deliver greater than promised, while other manufacturers delivered as little as half the claimed life.

As with the previous report, though, I’m struggling to understand the stated results …

Which says that a 13-inch MacBook Pro delivered 12 hours of battery life against the claimed 10 hours. Unhelpfully, the organization doesn’t specify which specific model this relates to, stating only that the results apply to laptops tested since January 2016. This means that it could be the old Retina model, the 2016 model without Touch Bar or the 2016 model with Touch Bar.

The result isn’t as crazy as those from Consumer Reports, and the testing regime does sound reasonable.

We test laptops for battery life while actively browsing the web over wi-fi, running the laptop in this fashion until the battery is fully drained […] Each laptop we judge goes through our battery tests at least three times. We […] drain the whole battery from start to finish, several times over, during various tasks. One test involves watching films until the battery finally shuts down, another continually browsing websites over wi-fi.

In a poll we ran back in December, the largest group of readers were seeing five hours or less from their new machines. I honestly cannot understand how either organization is seeing greater than 10 hours unless they are setting the screen brightness crazily low.

But for what it’s worth, the laptops with the most misleading battery life claims were these:

Since it’s been a while since that first poll, and readers will now have a lot more experience with their machines, we’re running a fresh poll to get updated figures. We’ve also expanded the options to distinguish between 5 hours and less than 5 hours. Please take part if you own a 2016 MacBook Pro, and share your experiences in the comments.