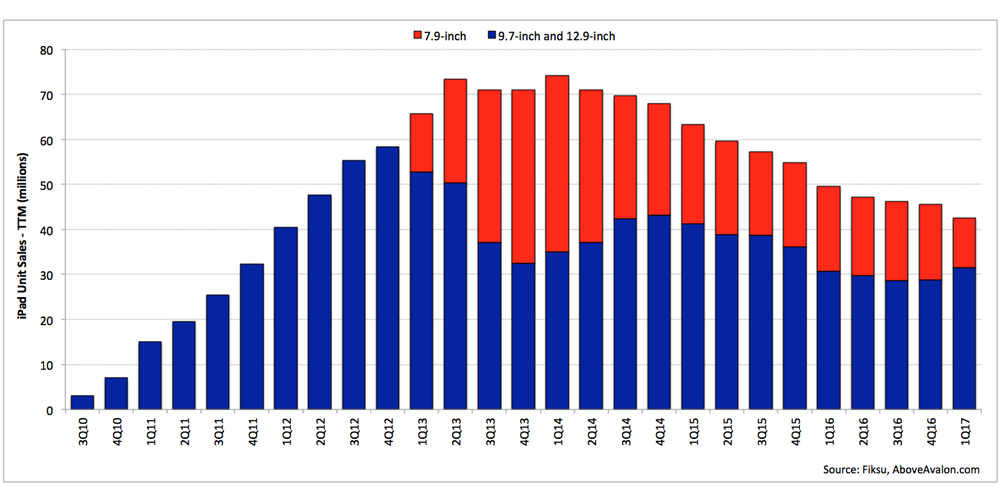 It’s been an accepted truth for years now: iPad sales are declining. Apple’s own figures show that sales have declined for twelve straight quarters.

But that doesn’t tell the whole story, suggests Above Avalon, citing the Fiksu data shown above. It’s actually the iPad mini whose sales are shrinking. Exclude these, and the combined 9.7- and 12.9-inch sales are actually flat to slightly up over the past year …

For the past four years, we have seen various theories put forth to explain the significant drop in iPad sales. Longer upgrade cycles, larger iPhones, inferior software, lack of professional apps, and even poor Apple storytelling have been given as factors driving iPad sales weakness […] Instead, the iPad’s problem has been the iPad mini.

The decline of the iPad mini of course makes perfect sense. Larger iPhones have left a smaller hole for the iPad mini to fill. And, of course, Apple has just made 9.7-inch iPads even more attractive by cutting the entry cost to just $329, suggesting that trend may be accelerated.

None of this is to say that the iPad mini no longer has a role. There are those who consider even an iPhone 7 Plus too small and a 9.7-inch iPad too large, and I suspect many of them are bought for young kids, for whom the small form-factor makes them easier to handle. But it does lend weight to my own view that the mini may be on its way out.

Neil Cybart argues in his piece that the bigger story here is that Apple will increasingly be pitching the iPad line as a replacement for laptops. He cites three pieces of evidence for this view.

He dismissed comments made by Apple execs, stating that actions speak louder than words. That’s a fair point, but those words have been pretty clear. Phil Schiller, for example, said last year that the laptop form factor was ‘eternal.’

The new MacBook Pro is a product that celebrates that it is a notebook, this shape that has been with us for the last 25 years is probably going to be with us for another 25 years because there’s something eternal about the basic notebook form factor.

So my own view is that the Mac will remain part of Apple’s product line-up even as iPad sales grow. The interesting part of his analysis is that, the mini aside, iPad sales are already doing just that.