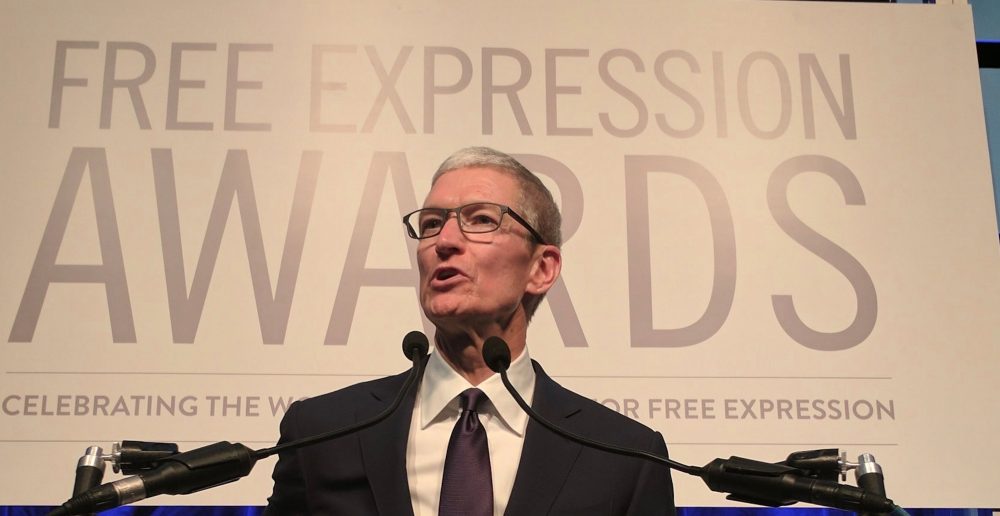 As expected, Apple CEO Tim Cook accepted the Free Expression Award at the Newseum in Washington D.C. tonight. At the event, Cook was presented the award and made brief comments on what it means to him and Apple, as well as touching on the importance of companies taking a stance…

Cook was chosen for the award because of how he has used his spotlight to “take a public stand on major societal issues” such as racial equality, privacy, climate change, education, and LGBT rights. Prior to the presentation of the award itself, a brief video was played highlighting some of Cook’s values, including clips for Cook’s George Washington University commencement speech, his comments on the FBI’s request to unlock the San Bernardino iPhone, and more.

Upon accepting the Free Expression award, Cook thanked Washington Post CEO and publisher Fred Ryan for the honor, explaining that he’s accepting it on behalf of everyone at Apple. Cook went on to address the idea of the freedom of speech.

As noted by AppleInsider, Cook explained that times now are very different from what they were when the Founding Fathers established the idea of free speech. There were no app developers, modern content creators, and other new forms of speech.

Cook went on to talk on the fact that Apple takes protection of the First Amendment very seriously, working to give everyone an opportunity to speak up and speaking up itself:

“This is a responsibility that Apple takes very seriously,” Cook said. “First we defend, we work to defend these freedoms by enabling people around the world to speak up. And second, we do it by speaking up ourselves. Because companies can, and should have values.”

“At Apple we are not just enabling others to speak up, we are doing so ourselves.”

Furthermore, Cook spoke on the importance of listening in a time when many people have conflicting opinions:

“Free speech isn’t only about speaking, it’s about listening, whether or not we agree. It demands we stay informed.”

Tim Cook has given Apple a voice on many social issues. He has been honored with the National Visibility Award from the Human Rights Campaign after becoming the first CEO of a major company to come out as openly gay. Furthermore, Cook has spoken on a variety of hot-button issues including diversity, immigration, and much more.

Video of the awards presentation should be available here soon.

True test of character? Taking pics w/ everyone waiting after .@Newseum #FreeExpression17 awards. Thanks .@tim_cook for your advocacy! pic.twitter.com/Ff78Lvlmfa

"We must be open to alternative pints of view, not alternative facts'" @tim_cook @Newseum pic.twitter.com/Q8maaaKvTc

Bravo to #TimCook from @Apple for tonight's #freespeech #award at #FreeExpression17 @newseum "Free Speech is about listening" We ❤️ #Apple pic.twitter.com/58hAEZxqt7

"If the public square falls silent, the whole system is at risk." –@tim_cook accepting the #freespeech award at @Newseum #FreeExpression17 pic.twitter.com/HbTXxGjNHt