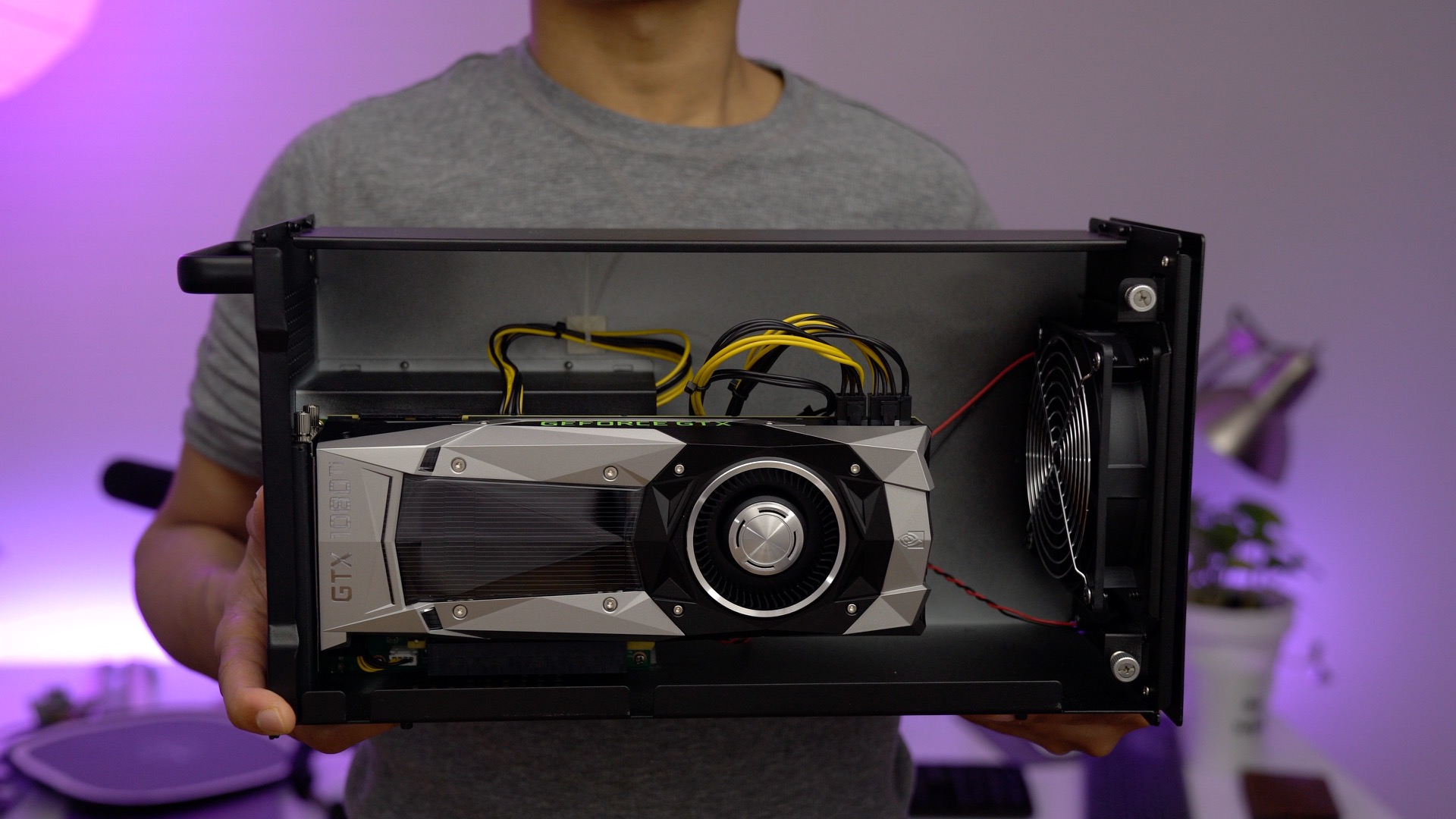 After last week’s exciting release of Nvidia’s beta Pascal drivers for Mac, I was looking forward to trying the top of the line consumer GPU with my MacBook Pro. That GPU is none other than the venerable GeForce GTX 1080 Ti — a $700 card with 11 Gbps of GDDR5X memory and a 11 GB frame buffer. Needless to say this card is one that will interest those looking to push their games to the next level.

I took the time to install my EVGA GTX 1080 Ti FE inside of my Akitio Node external GPU enclosure. After connecting the unit to my 2016 MacBook Pro via a Thunderbolt 3 cable, all it took was a simple shell script and a reboot to get the unit working with a (required in macOS) external display.

Nvidia’s drivers are still in beta, and from my hands-on time, the experience is far from perfect in macOS. That said, you can most certainly see the potential and performance differences between the 13-inch MacBook Pro’s integrated Intel Iris Graphics 550 GPU, and the beastly 1080 Ti. As expected, it’s also a lot faster than the GTX 1050 Ti that I tested last week.

If you’re looking to truly experience the power of such a card with the MacBook Pro, however, you’ll need to step into the Windows world, and run a Boot Camp installation. The GTX 1080 Ti + Windows turns the MacBook Pro into an insanely powerful and flexible gaming machine with just a single Thunderbolt 3 cable. Watch our hands-on video walkthrough as we explain.

Step 1: Install the GTX 1080 Ti or other Pascal graphics card inside of the Akitio Node, and connect the 6+8 pin power connectors.

Step 4: Connect to an external display from your graphics card via HDMI or Display Port.

Step 5: Connect the power to the Akitio Node, and turn it on.

Step 6: Open a Terminal window and paste in the following to download, patch the kernel to remove validation checks, and install the drivers.

Disclaimer: While I trust Goalque’s script, you should always view the contents of the script by clicking the source link to verify its integrity. Proceed at your own risk.

Follow the instructions presented in Terminal, and reboot your Mac when requested. After rebooting, you will see macOS on the externally connected display. You should also see Nvidia’s Driver Manager app running in the menu bar, and available in System Preferences. Special thanks to goalque for providing such a simple-to-use script. 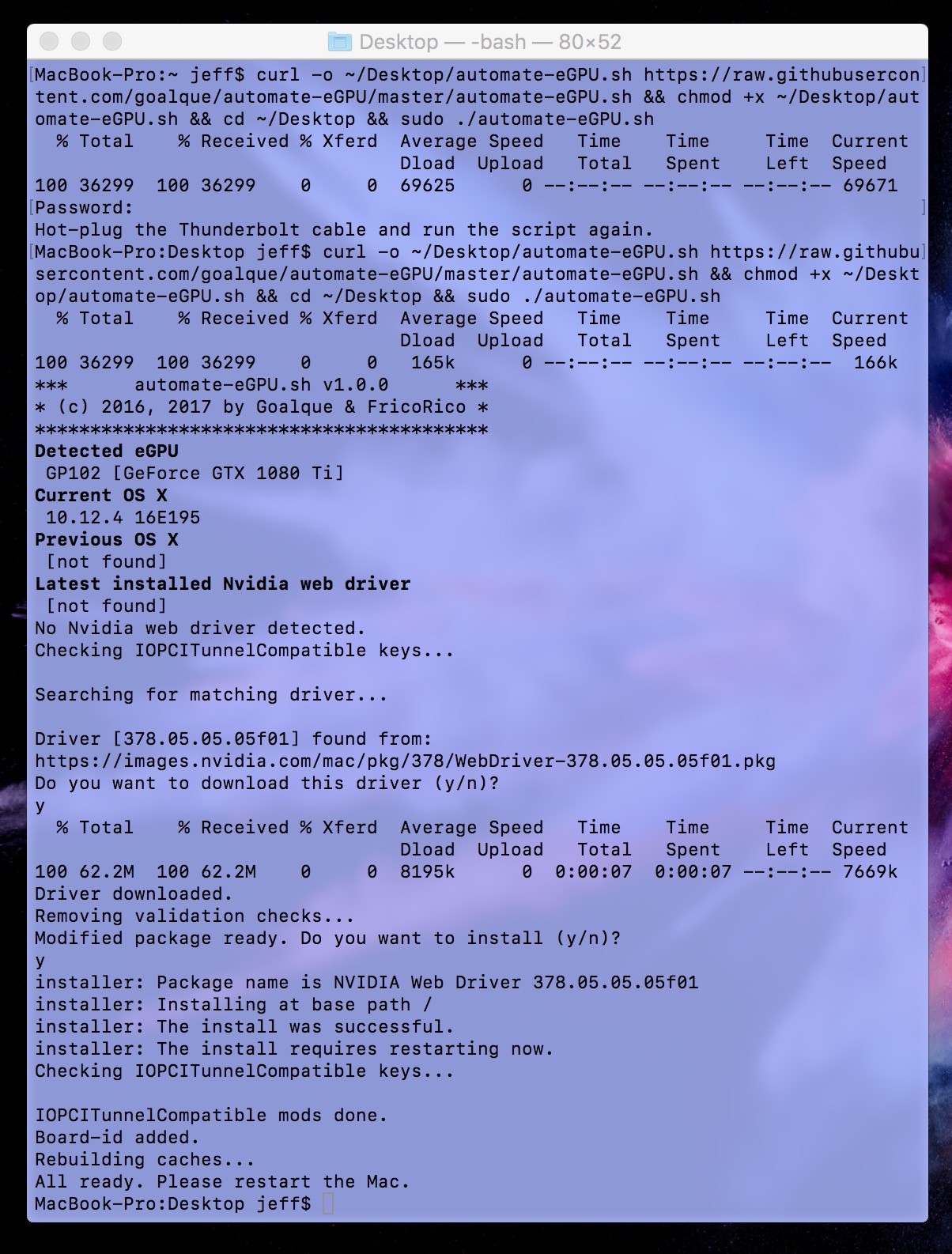 We ran a few Benchmarks using Unigine Heaven, Valley and CineBench, and you can very obviously see the performance difference between the integrated Intel GPU and the discrete Nvidia GPU. Benches were performed at 1080p resolution on an external display.

Even if you have a relatively weak MacBook such as the entry-level model without the Touch Bar, you can get big performance gains with this setup when it comes to gaming. Of course, a more powerful quad-core MacBook will perform even better, but all eligible models stand to reap serious gaming benefits.

But those performance gains are largely stymied by the bugginess and general unreliability of such a setup on macOS. Remember, these are just beta drivers, and it’s still very much early in the game.

Many of the games that I tried via the Mac App Store, or via a service like Steam experienced some issues with bugs or crashing. It’s clear that the potential is there waiting to be tapped into, but it’s not quite ready for prime time. Therefore, it would be difficult for me to recommend investing into such a setup if you’re only interested in running macOS…

Windows is where it’s at

And that’s where Windows comes in. Yes, Pascal is now somewhat compatible with macOS, but in reality, you’re going to want to run Windows on your MacBook Pro if you want to be able to justify such an investment. By going this route, you’re essentially turning your MacBook Pro into a bonafide high-powered Windows gaming machine. And let me tell you folks, it flies.

The great thing about running Windows with an eGPU setup is that, unlike in macOS, the GPU can drive the MacBook Pro’s internal display, and you’ll find stable drivers that work well for most games. That means that you can utilize an extra long Thunderbolt 3 cable for added flexibility while enjoying the latest games.

To learn how to install Windows 10 on your MacBook Pro, be sure to watch and follow our full hands-on Boot Camp guide for Windows 10. The video has been viewed over 200,000 times now, and lots of people have been surprised by how easy it is to run Windows on a MacBook Pro.

After Windows is installed on your MacBook Pro, simply connect the eGPU via a Thunderbolt 3 cable, and install the GPU drivers.

Please note that you’ll need to plug in the Thunderbolt 3 cable after the Windows logo appears as it starts the boot process.

We saw how much the MacBook Pro improved in benchmarks when using the GTX 1080 Ti, but how about on Windows? As you’ll see, the Windows environment is where such an eGPU setup thrives.

Since Windows allows me to use the MacBook Pro’s internal display, I included benches for that as well. Notice the huge performance gap between Windows and macOS.

But benchmarks only tell a portion of the story. The games heavily benefit from the added power of the eGPU. 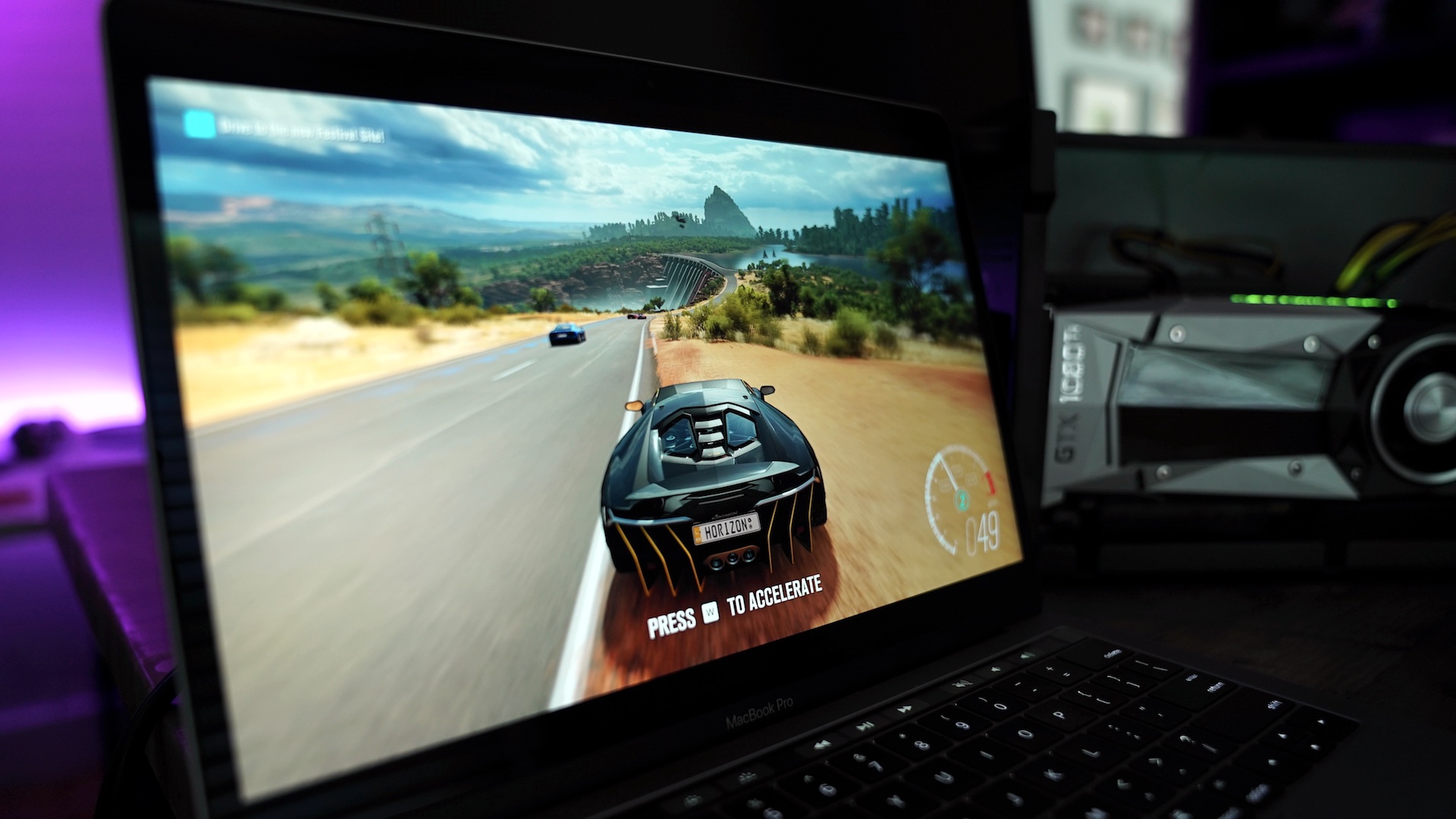 I was able to run graphics-intensive titles like Forza 3 Horizon at maximum settings on my external display at 4K resolution. The game looks absolutely incredible, and stays locked in at 30 FPS for a smooth experience, but can easily fluctuate around 40-45 FPS if you disable the FPS lock. Trying to pull off a feat like that using the MacBook Pro’s Intel Iris 550 Graphics would be utterly laughable. In fact, the game won’t even run at all with the integrated GPU.

Other games, like Rocket League, play at maximum settings on my 4K external display while locked at a silky smooth 60 FPS. My experience while using the eGPU in macOS was nothing like that, in fact, Rocket League could barely hold up a consistent 30 FPS while running at 4K.

eGPUs are here to stay. They afford a great deal of on demand power while allowing you to have a light and nimble machine like the 13-inch 2016 MacBook Pro. One of the biggest remaining hurdles is the fact that eGPU enclosures are still very hard to come by. The Akitio Node is just now becoming more readily available, while other eGPU solutions are backordered, or still in the works. 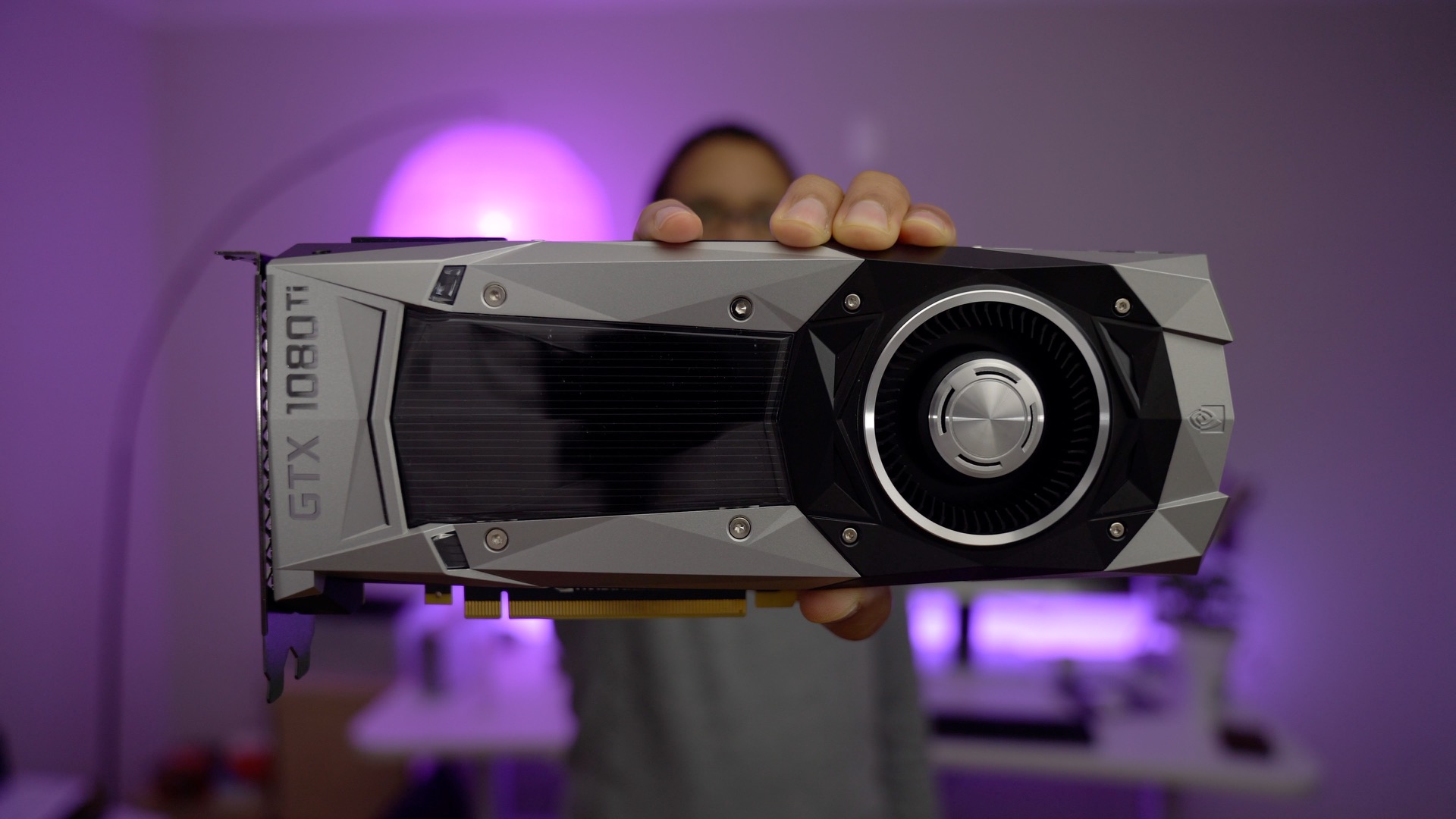 As mentioned, you can use any Pascal-based card in the Akitio Node and have it function with macOS. That means that you don’t necessarily have to spend $700 on the 1080 Ti. More price-conscious cards like the GTX 1060, 1070, and 1080 can still provide ample gaming performance gains.

Having Pascal support on macOS is nice, but the real fun and potential is realized by running Windows via Boot Camp. If you’re a gamer with a 2016 MacBook Pro, then you are in possession of a very flexible machine that can run macOS for day-to-day work, and Windows for intense gaming sessions when connected to any Pascal-powered eGPU. 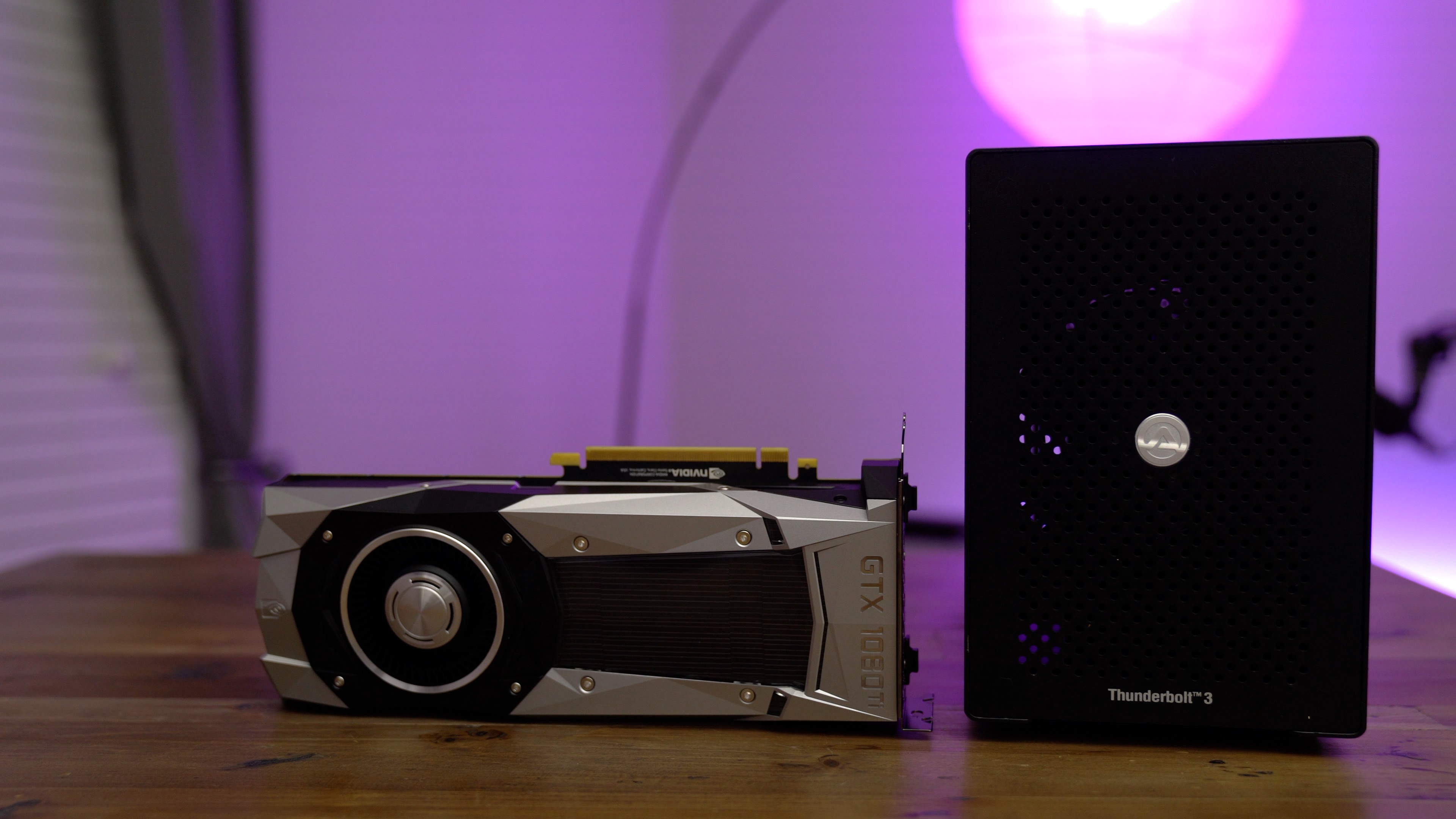 Would you consider using an eGPU with your MacBook Pro given the obvious gaming benefits? Sound off with your opinions down below.