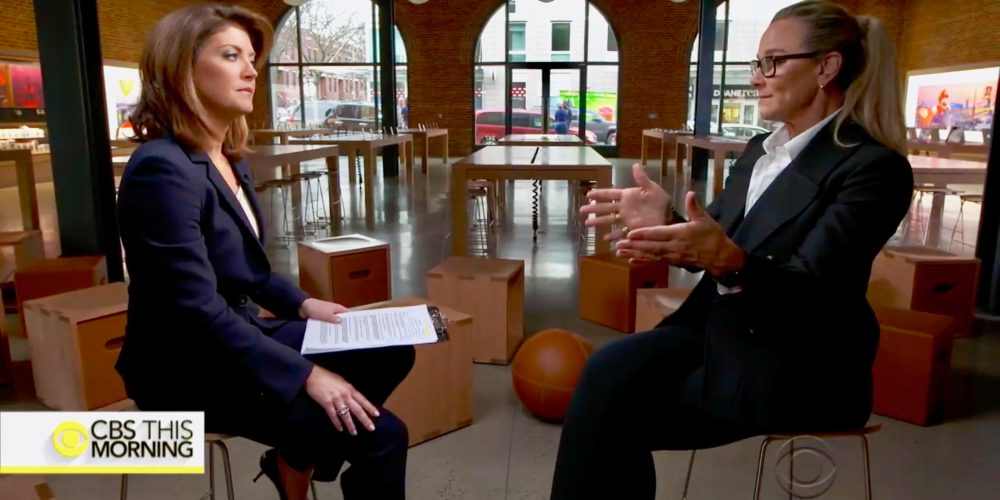 Angela Ahrendts, Apple’s senior vice president of retail, has appeared in a new video interview with CBS This Morning where she discussed her time at the company and new Apple Store initiatives. The major new Apple Store effort centered around customer engagement is called ‘Today at Apple’ and will launch at the end of next month.

“Is the idea that the store will have all of these listed classes, teachers, experiences that will be publicly posted that will draw more and more people in?” O’Donnell asked.

“Absolutely,” Ahrendts said. “So we call the software of the store that we are launching the end of May – we call that Today at Apple.”

That “software” will roll out across Apple’s nearly 500 stores, many of which will be changed literally overnight. Ahrendts calls it all an effort to create “town squares” where customers engage with their devices and their communities.

Apple has detailed the newly expanded program on its Newsroom site today as well.

Apple today announced plans to launch dozens of new educational sessions next month in all 495 Apple stores ranging in topics from photo and video to music, coding, art and design and more. The hands-on sessions, collectively called “Today at Apple,” will be led by highly-trained team members, and in select cities world-class artists, photographers and musicians, teaching sessions from basics and how-to lessons to professional-level programs.

Small business owners can engage with global and local entrepreneurs in the new Business Circuits program.

In the interview, Ahrendts also discusses the ongoing Apple Store changes we’ve seen in recent months including the Genius Bar being rebranded as the Genius Grove and flagship stores undergoing major redesigns.

Ahrendts says her goal for Apple Stores is for people to see it as a community meeting place.

“And you know, I’ve told the teams, ‘I’ll know we’ve done a really, really great job if the next generation, if Gen Z says, “Meet me at Apple. Did you see what’s going on at Apple today?”’”

“Does that apply to Android and Samsung users too?” O’Donnell asked.

“Absolutely. Absolutely. And we have an incredible trade up program that—” she said, laughing.

One flagship Apple Store currently being remodeled is the iconic 5th Ave. glass cube which appears due to be replaced and revamped. Apple is also opening an art-packed new retail location at the Dubai Mall this week.

Check out the full article here and watch excepts from the appearance below: