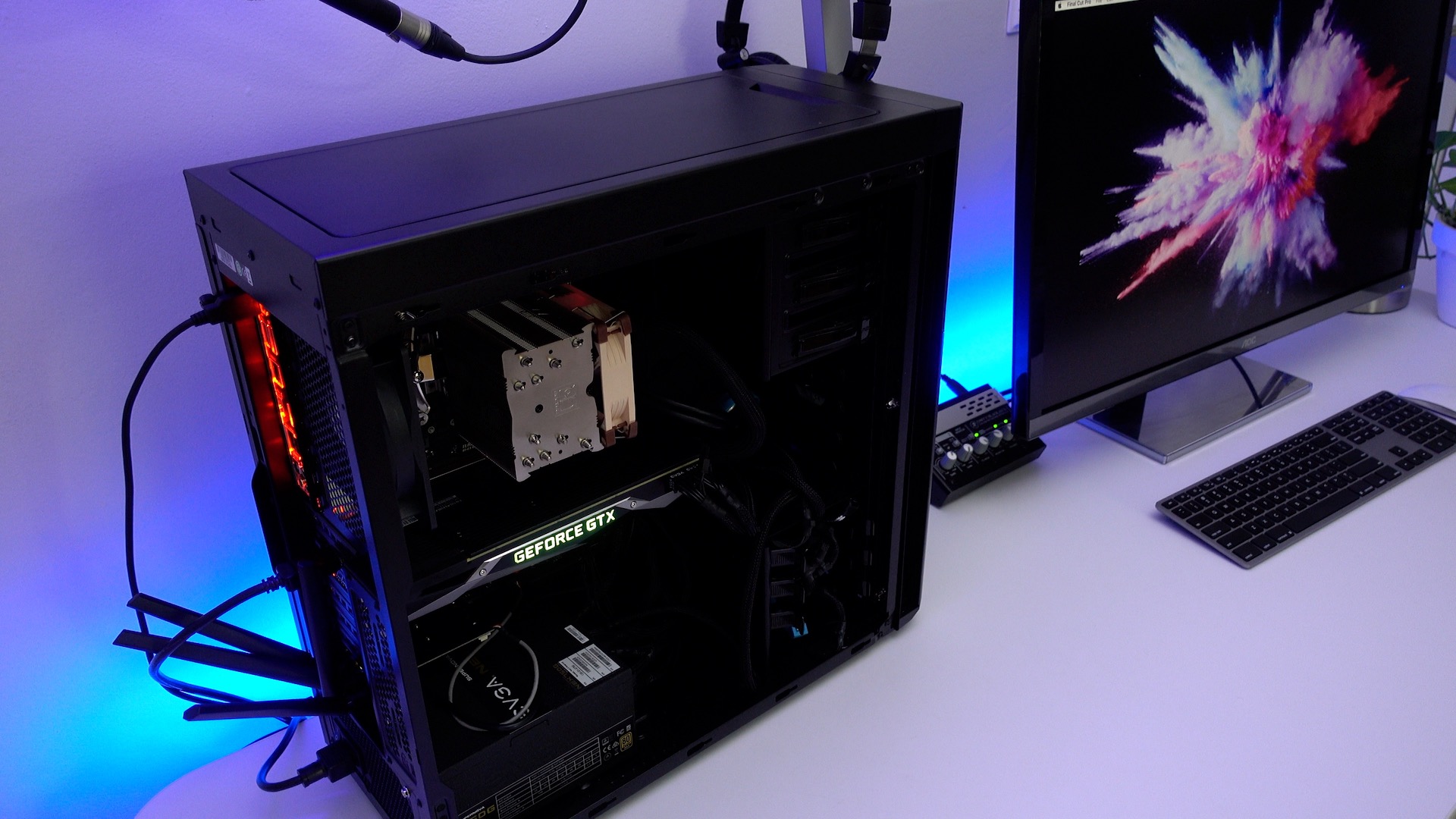 In a previous article, posted shortly after Nvidia announced its new Pascal Mac drivers, I briefly discussed my plans to build a new Hackintosh. I’ve been planning and working on the machine for over a week, and I’m finally at the point where I can share the results of my journey.

This isn’t my first Hackintosh build, but it’s the first build where I decided to go about it without the assistance of the excellent tools over at tonymacx86. I’ve been long interested in building a Hackintosh using just the Clover EFI Bootloader, and that’s exactly what I did for this build.

Going about it this way allowed me to learn more about the process, and helped me to see that the entire premise, while tedious at times, is actually fairly straightforward. In this initial post, I’ll talk about some of my reasoning behind my hardware choices, and share some initial experiences and benchmark results.

Why I wanted a Hackintosh

I needed a fast, expandable, quiet machine that runs macOS. Unfortunately, Apple doesn’t offer such a machine at the moment. Granted, there has been a renewed vow to focus on Pro machines, but those are still a ways off.

As a video editor, the 2016 MacBook Pro is adequate, it’s just not the ideal editing machine for me. I wanted something powerful, relatively quiet, and highly expandable. At this point, building a Hackintosh is one of the few things that meets all three of these requirements.

Downsides of a Hackintosh

Of course, a Hackintosh isn’t a perfect machine. It can take a lot of testing to get it right, and I’ve spent many hours trying to perfect my build. Almost everything that I care about works, but let’s be honest and say that nothing can replace the “just works” nature of a machine designed in Cupertino.

For example, there’s the iMessage problem. There are known workarounds to get iMessage working, but it doesn’t work out of the box. As someone who rarely uses iMessage on the Mac anyway, I’m abstaining from touching it at this time. There are simple step-by-step guides that you can follow if you wish to get it working, but I’ve heard mixed reports from people who have tried these methods.

The other major issue involves modern GPUs from AMD. In theory, these are the best GPUs to use in a Hackintosh because of their superior OpenCL performance with Final Cut Pro X. Unfortunately, these GPUs require an iGPU to be active, kext modifications, and often caused the latest version of Final Cut Pro X to crash.

That’s not to say that AMD GPUs don’t work, because they do, it’s just that Nvidia GPUs are easier to get going for Hackintosh newbies thanks to easy-to-install Pascal Web Drivers. We’ll tackle the prospect of utilizing an AMD GPU in a later post.

The good news is that there is a plethora of good help available on the web to help troubleshoot issues you encounter while building your Hackintosh. There’s the aforementioned tonymacx86, and there are also sites like InsanelyMac.

As someone who edits videos, does voiceovers, and participates in podcasts, having a quiet machine was of utmost importance. For that reason I choose the Corsair Carbide Series 330R. 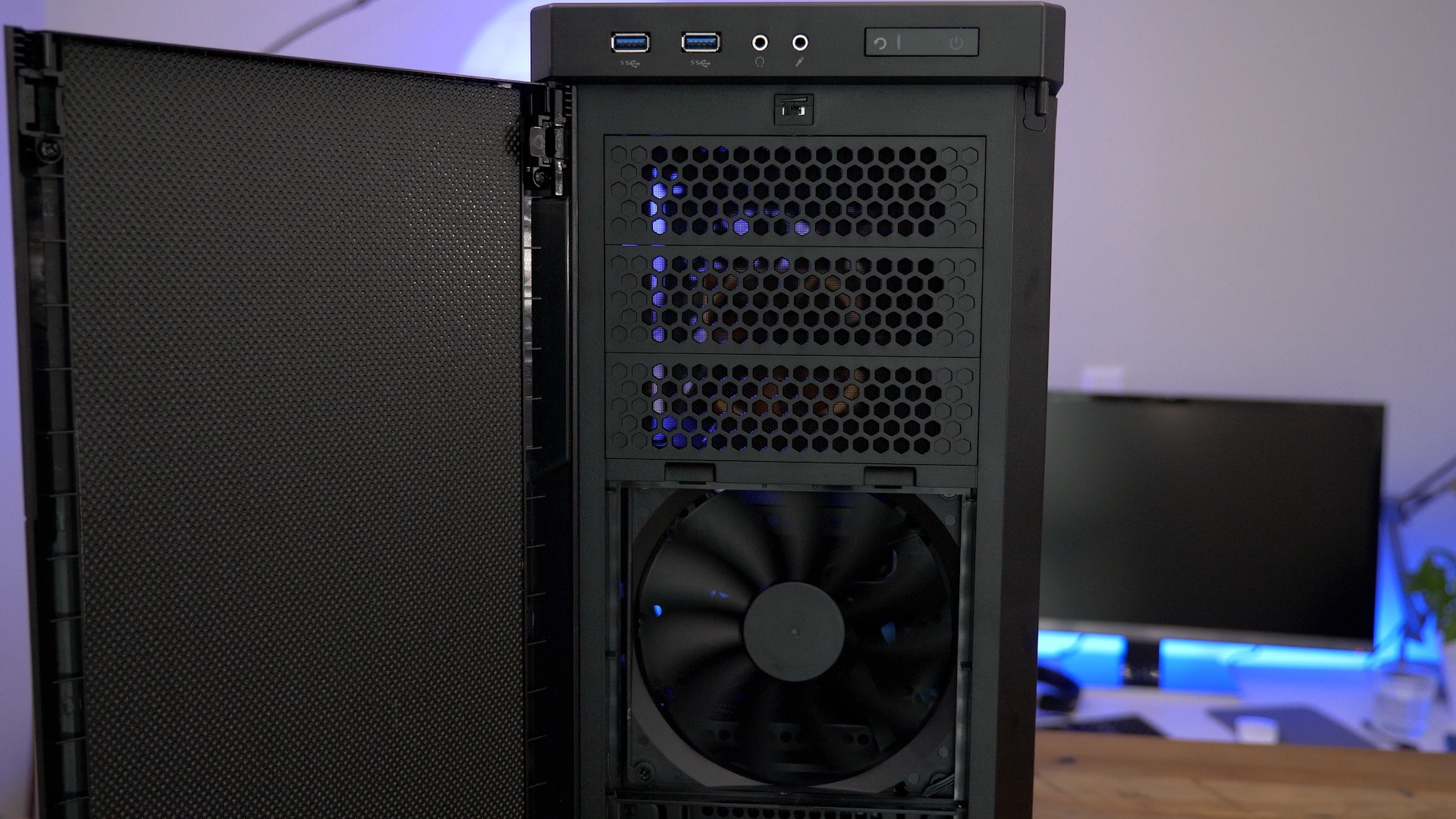 The full-sized ATX Carbide Series 330 is a bit larger than I wanted, but that allows for plenty of airflow and expandability. The side panels, front cover, and top vent cover feature sound-dampening material to reduce noise emitting from inside the case.

It’s far from the prettiest case, but I reason that since it’s going to be tucked away on the floor, looks take a back burner to performance. I’m not blown away by the Corsair Carbide, but I am satisfied with the results.

I was this close to buying a fan-less Silverstone 520W power supply, because it’s dead silent, however, 520W isn’t enough power for the 1080 Ti GPU. If I had opted for a lesser GPU, like the RX 480, I could have easily gotten by with the fan-less PSU. 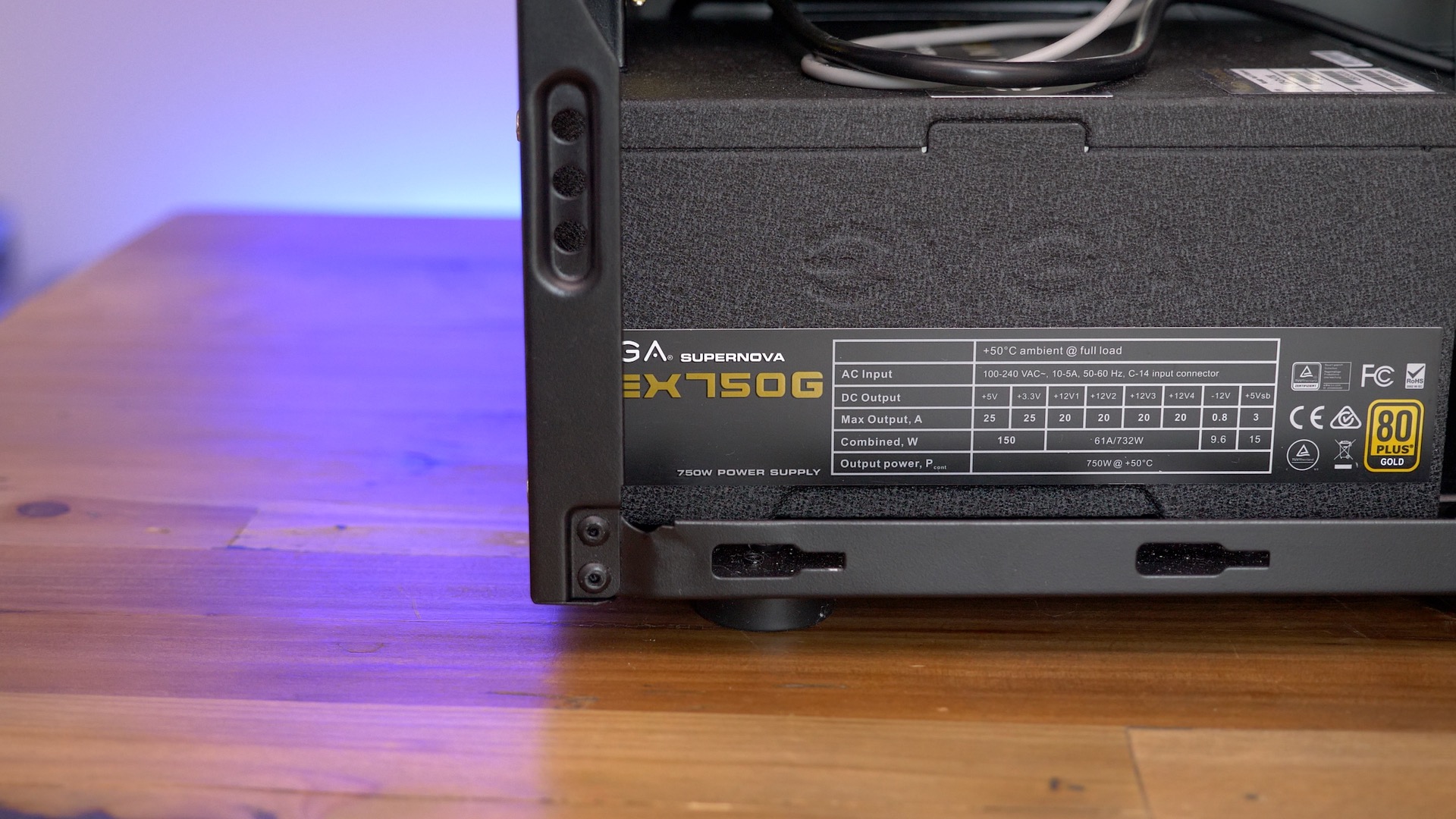 I decided on EVGA’s 750W offering, as it provides plenty of power for my rig and features a fully-modular design. It’s not dead silent, but it’s quiet enough to not be a distraction when recording audio.

I’ve had good success with Gigabyte motherboards in the past, and this full ATX UEFI-enabled board is no exception. Although I’m not yet using it, I like the fact that the board features built-in Thunderbolt 3 and USB 3.1. The Gigabyte UEFI interface also makes the CPU super-easy to overclock. 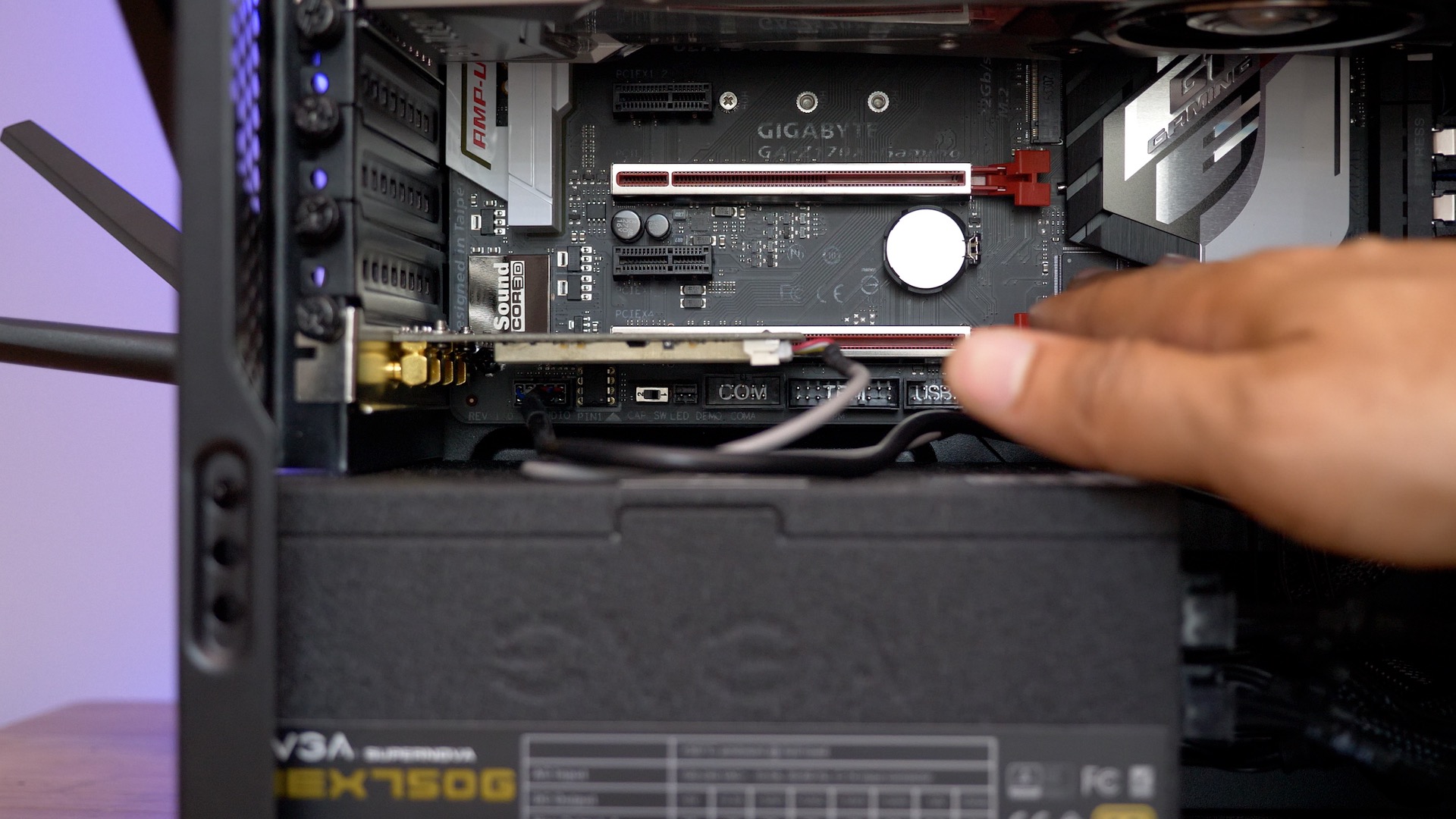 For the power you get, I think the Skylake Core i7 6700K is well-priced. I’m able to easily overclock this CPU to 4.6GHz, and the benchmark results speak for themselves.

This 6700K is the same CPU used in the most recent 5K iMac, but unlike real Macs, Hackintosh machines can be overclocked to eek out even more performance. As a result, my Hackintosh is faster at single core operations than any official Mac product that Apple makes. And in multi-core tasks, only the 12-core and 8-core Mac Pro bests it. 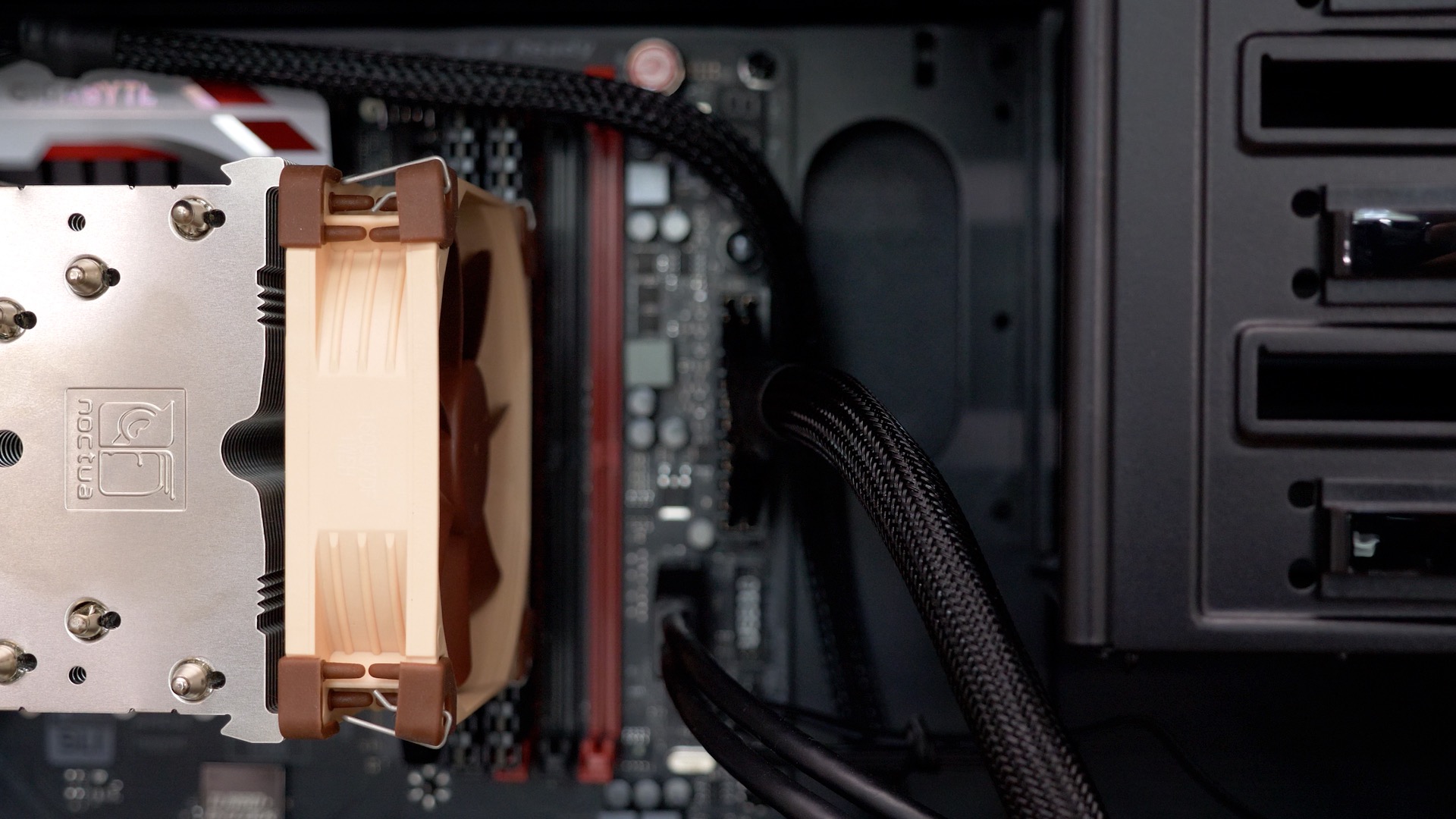 Keeping with the theme of being quiet, the Noctua Quiet CPU Cooler does a good job of keeping the CPU at reasonable temperatures, while remaining whisper quiet.

For most Mac users, the GTX 1080 Ti is overkill in the greatest sense. However, if you plan on dual booting Windows, then having such a card can pay dividends. 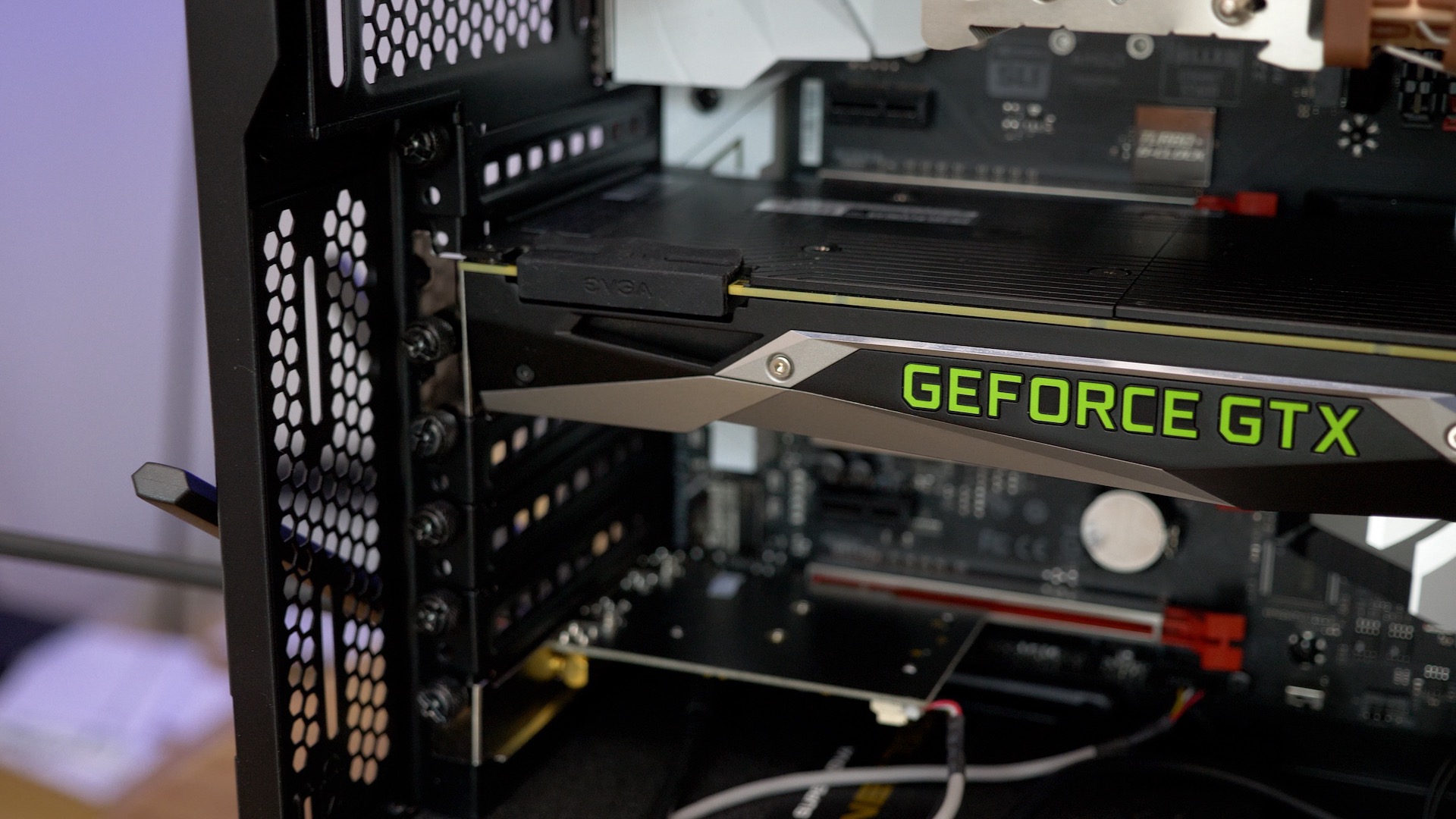 Most Mac users would probably be better off with a less expensive GPU, and Nvidia makes plenty of them. There’s also AMD GPUs, which offer better OpenCL performance, which benefits Final Cut Pro X, but I found that my AMD RX 480 resulted in random FCP X 10.3.3 crashes.

But even with beta drivers, the 1080 Ti performs decently on macOS, and its performance is otherworldly on Windows. This will largely be a personal decision, but I prefer Pascal-based GPUs due to their simple install process, ease of use, and relative stability — even while in beta.

There’s no real reason why I chose this RAM other than the fact that I wanted 16 GB and the Corsair Vengeance featured good reviews at a reasonable price. I plan on upgrading to 32GB eventually, but wanted to see how the build turned out before buying all four sticks. 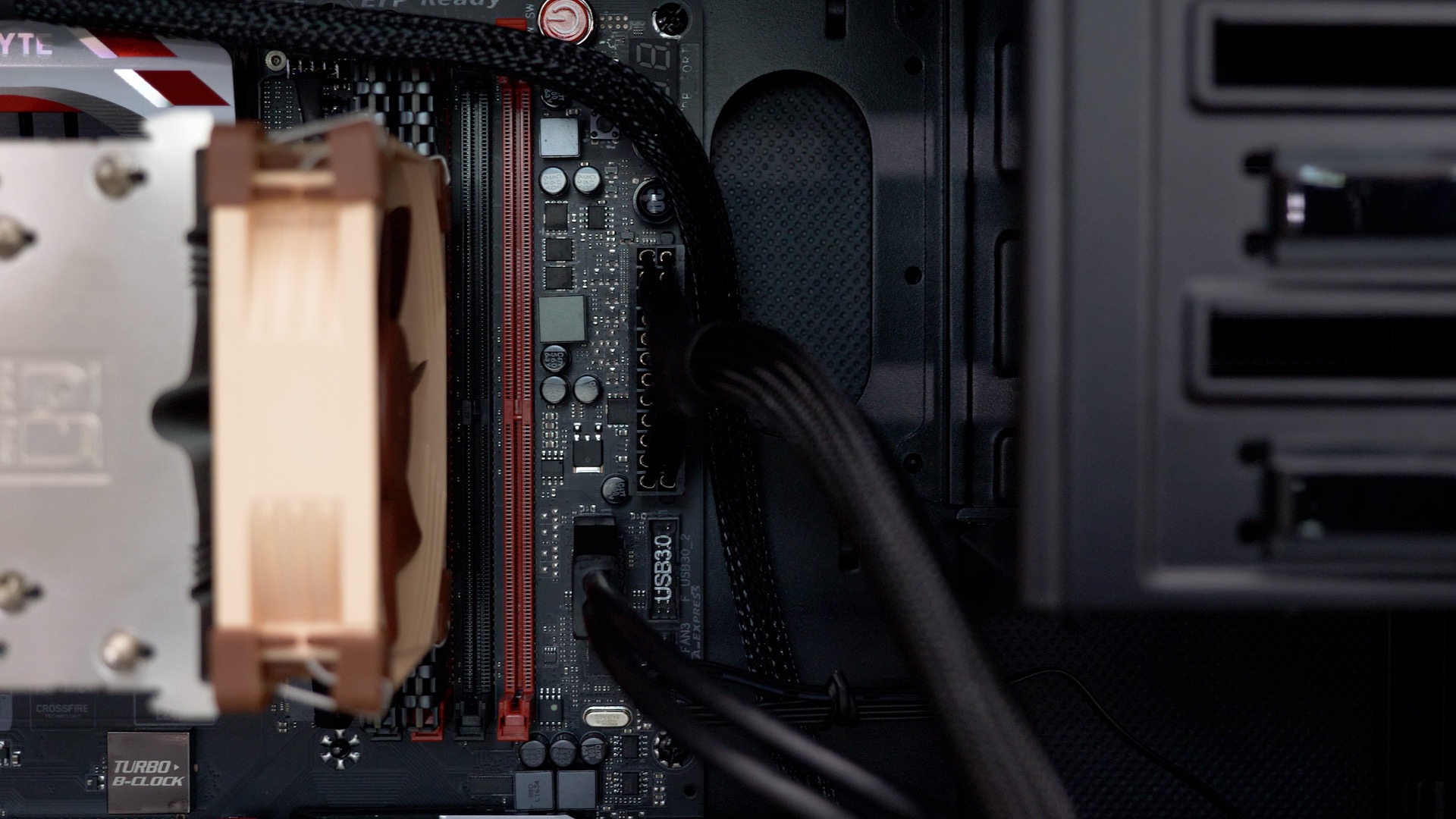 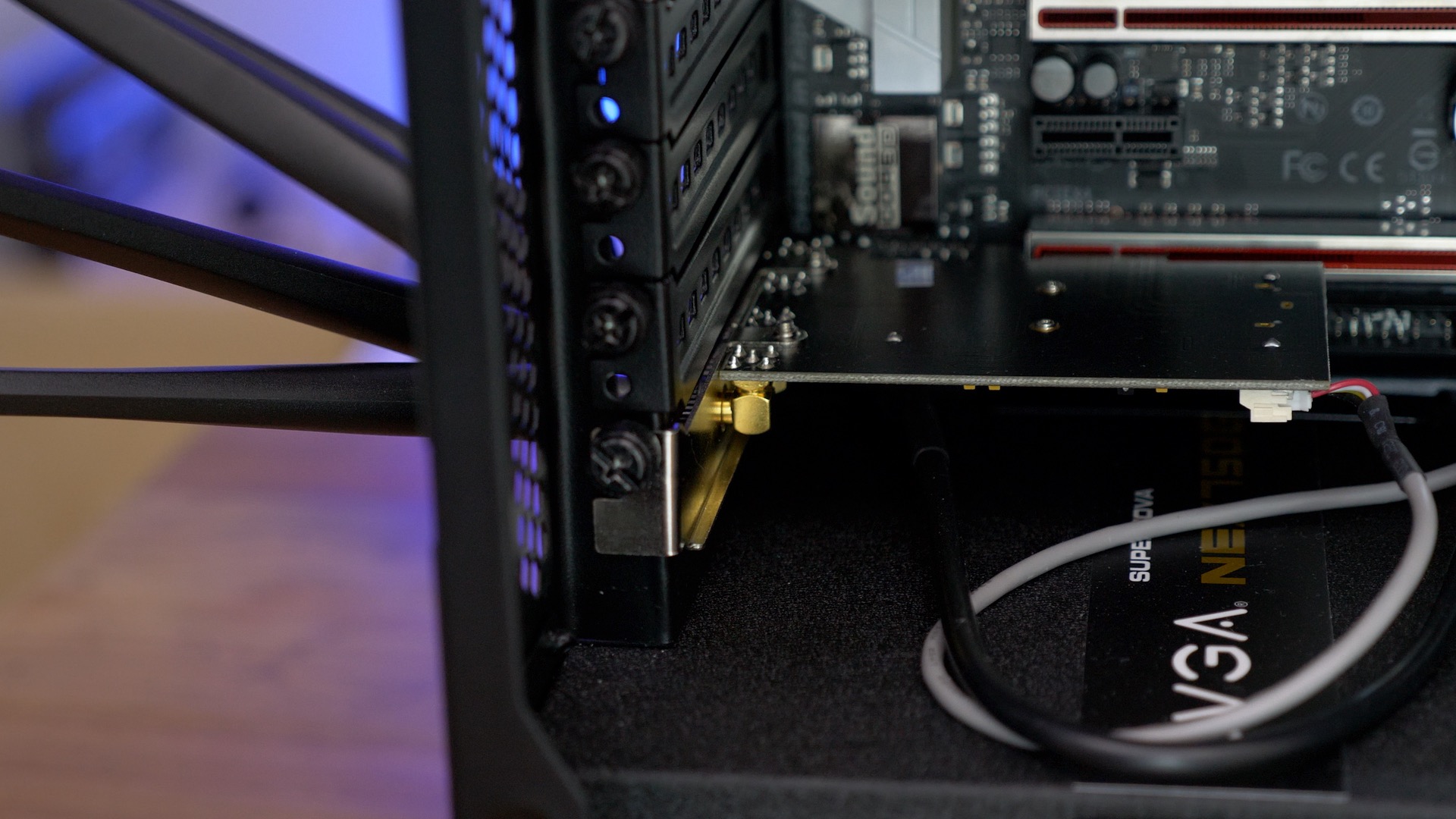 The folks at SanDisk provided these SSDs for a previous test, and I was able to reuse them for my Hackintosh build. This disk offers plenty of storage space to house everything on my boot drive, and while the speed doesn’t compete with newer NVMe options, it’s good enough for the time being. 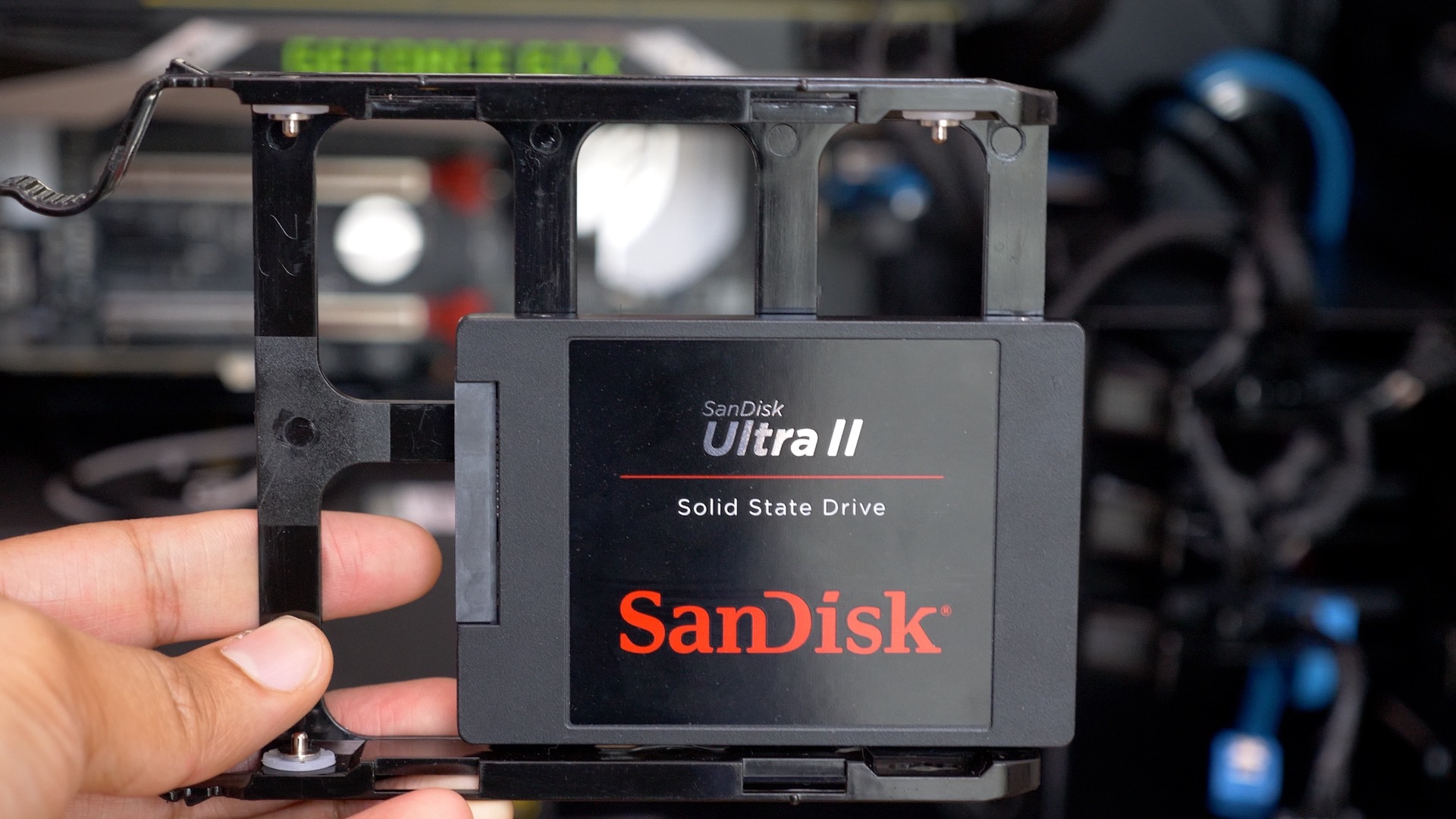 Along with these items, I’m also using a cheap hardwired Amazon keyboard and mouse. Apple’s Magic Mouse works fine, as does my Matias Bluetooth Wireless Keyboard, but it’s always a good idea to have hardwired input devices when working on low-level stuff like UEFI and bootloaders for instantaneous response. After the system is fully built, I switch back to my wireless peripherals for convenience.

One of the appeals of the 6700K is how easy it is to overclock. The Gigabyte motherboard makes overclocking super-easy, and I was able to drive the clock speed up to 4.6 GHz with just a few mouse clicks. 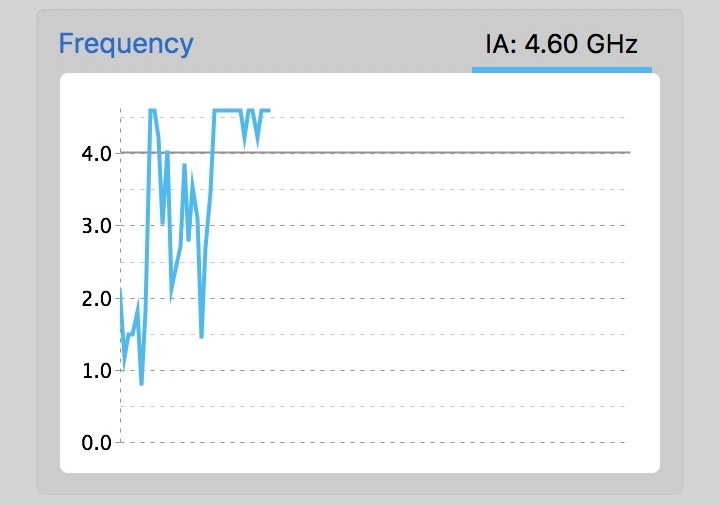 macOS will not readily report the bumped up clock speed, but by utilizing Intel Power Gadget, you can quickly discern the true clock speed of the CPU.

In a soon-to-follow post, I will provide my full Hackintosh how-to walkthrough. The walkthrough will discuss each step, start to finish, that I employed for this build.

Until then, I wanted to briefly share my experience with this machine. Here’s a list of things that work as expected:

Here are the things that don’t currently work:

Most of the things that don’t work I can live with. Although iMessage can be fixed, and Thunderbolt 3 probably can as well, I haven’t bothered to spend much time on either. The 4K@60 Hz HDMI issue is a bit more difficult to crack since no official Macs ship with the required HDMI 2.0 interface. 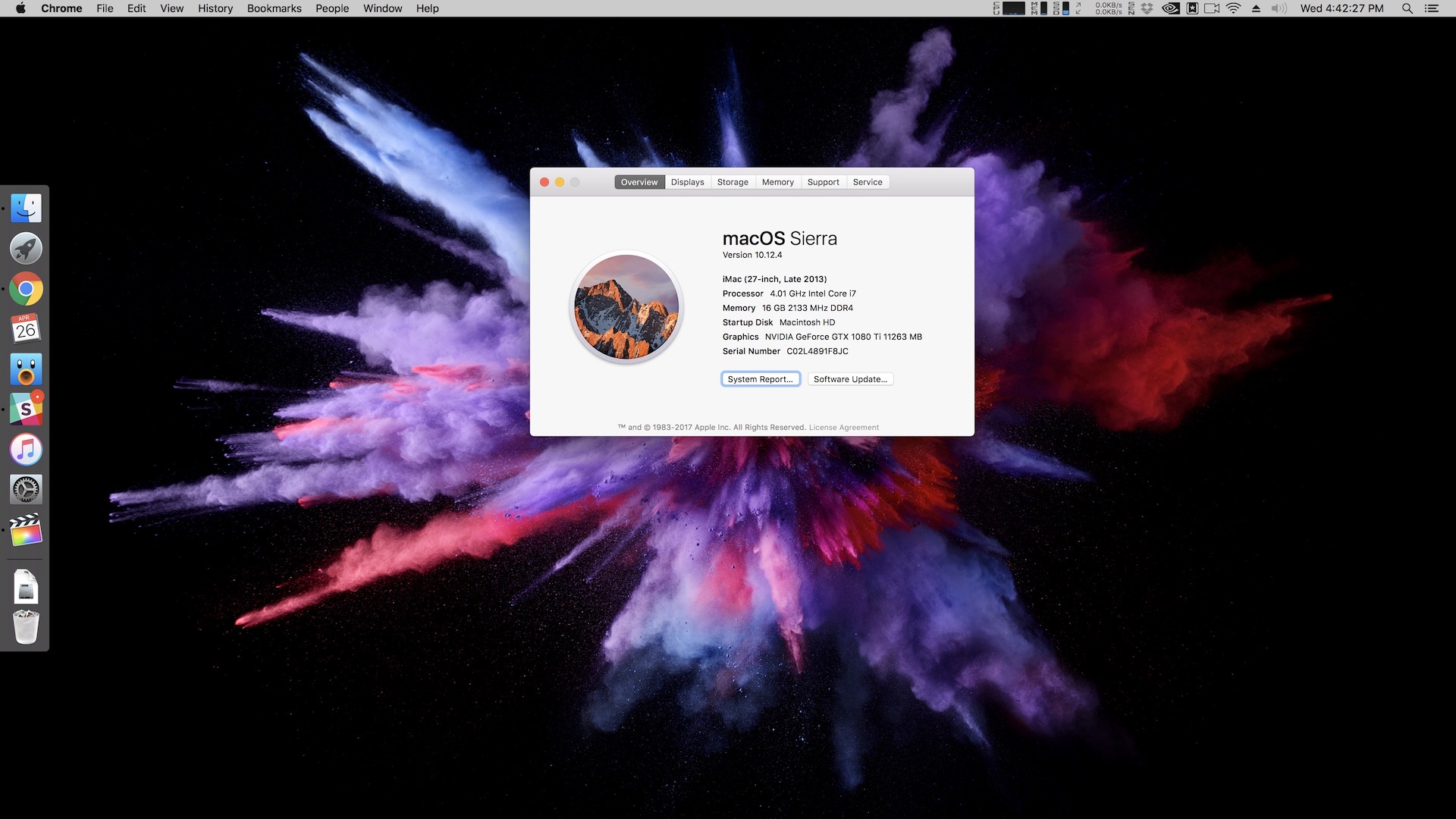 But even with these downsides, I have a largely usable and powerful machine. In fact, this Hackintosh is faster than any Mac that Apple currently sells in some respects, with single core CPU scores besting the 2015 iMac with similarly-equipped 4 GHz Intel 6700K i7 processors, and multi-core scores besting every Mac outside of a handful of 12- and 8-core Mac Pros.

My most important task, that of editing 4K video in Final Cut Pro X, performs well. Export times are decent, though they won’t compete with the results of CPU-based encoding afforded by Intel Quick Sync. But even more important is the fact that I can easily scrub through and play back 4K timelines in full resolution without having to transcode to proxy. All of this occurs without my machine sounding like a jet engine ready to leave the runway.

Although it doesn’t always equate to real world results, the BruceX 5K Final Cut Pro benchmark is a popular way to test Final Cut Pro X performance. My Hackintosh can run this benchmark in 20 seconds on average, which is a very good score if you know how intensive BruceX 5K can be.

Needless to say, I’m satisfied with this Hackintosh build. There are some things I’d like to change, such as introducing a faster NVMe boot drive (These SATA SSDs are slow by today’s standards) and adding more RAM, but those are largely trivial items.

Stay tuned for our follow-up posts, which will detail the entire macOS install process from start to finish using Clover EFI Bootloader. In the meantime, share your thoughts on my Hackintosh build. Is there anything that you would change? Would you consider building a Hackintosh for yourself?