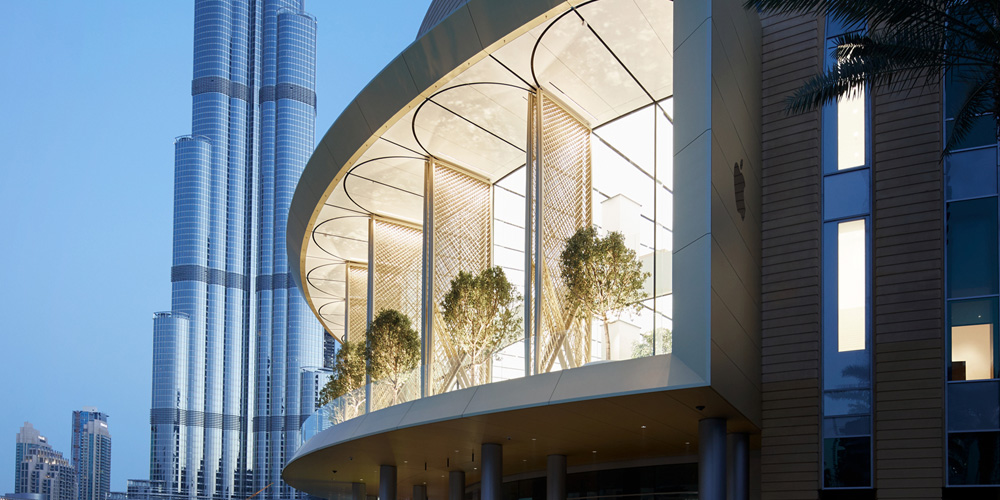 Apple today officially celebrated the opening of its new flagship retail location at the Dubai Mall. We previously shared some images of the store and its surrounding amenities, but now that it’s officially open to the public, Apple itself has offered up some video and imagery from the grand opening…

Posted to Apple’s Newsroom website this evening, the amigos show a packed hours for the opening of the Dubai Mall retail store. The store features a multi-level design and opens to the beautiful Dubai Fountain. There’s an outdoor observatory area, as well, allowing people to take in the beautiful views.

The Dubai Mall Apple Store also offered customers the chance to try the new Today at Apple experience, which includes things such as classes, concerts, and more, which will be run by Creative Pros, a new position we first discovered in August of last year.

Perched above the Dubai Fountain and in the shadow of the Burj Khalifa, Apple Dubai Mall opened to thousands of customers Thursday afternoon. Customers were the first in the Middle East to experience the just-announced Today at Apple programs.

As we explained yesterday, Apple’s Dubai Mall store location is unique in a handful of ways. The store features eighteen 37.5-foot-high motorized “Solar Wings” that respond to changing environmental conditions. When the sun is at its hottest they cool the store, and in the evenings they open to welcome everyone to the public terrace.

At the heart of every Apple Store is the drive to educate and inspire. “Today at Apple“ will launch at Apple Dubai Mall and in all 495 Apple stores next month with new sessions across photo and video, music, coding, art and design, and more, led by highly-trained team members. Apple Dubai Mall will also host high-profile events including live music, intimate conversations with film-makers and photographers, and live workshops with some of the world’s top talent. Events on opening day include Live Art with Myneandyours, and Artist Duos with musician Hamdan Al Abri and artist Sultan Al Ramahi.

View images and video from the opening of Apple’s Dubai Mall location below and let us know what you think of it in the comments.