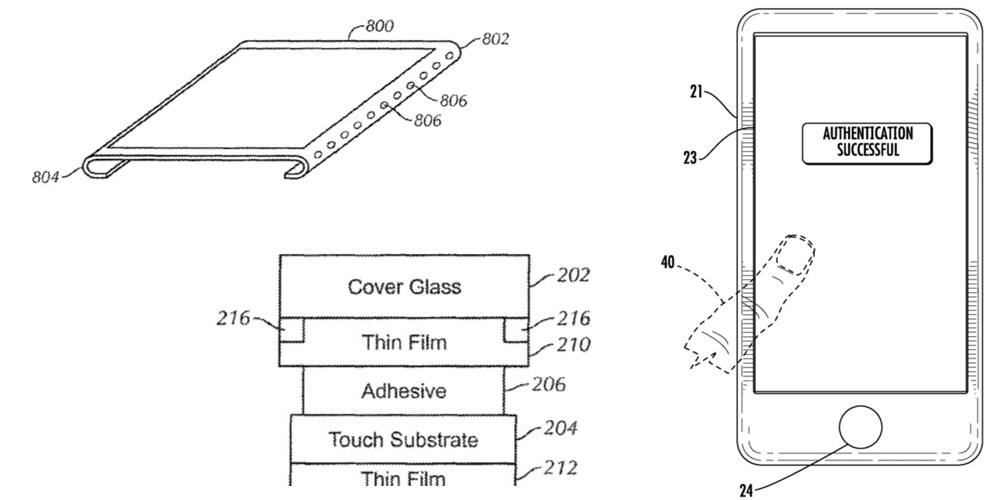 Apple has today been granted patents for two headline features expected from the iPhone 8: an edge-to-edge display, and a Touch ID button embedded into the screen.

The edge-to-edge display patent has the rather mundane heading ‘Reducing the border area of a device.’ It describes how a mostly-flat display can have a curved border area allowing it to wrap around the sides of the device …

This relates to methods and systems for reducing the border areas of an electronic device so as to maximize the display/interactive touch areas of the device. In particular, a flexible substrate can be used to fabricate the display panel and/or the touch sensor panel (referred to collectively herein as a “circuit panel”) of a mobile electronic device so that the edges of the display panel and/or the touch sensor panel can be bent. Bending the edges can reduce the width (or length) of the panel, which in turn can allow the overall device to be narrower without reducing the display/touch-active area of the device.

The embedded Touch ID patent is one of many submitted by Apple, describing different approaches it could take. This one re-uses language from a separate patent granted back in February, describing the benefits of allowing a user to authenticate without having to remove their finger from the screen.

As is usual with Apple’s patents, the drawings are generic in nature rather than illustrating any specific device type.

The patents were granted on the same day that new renders appeared, based on CAD drawings claimed to be of the iPhone 8.