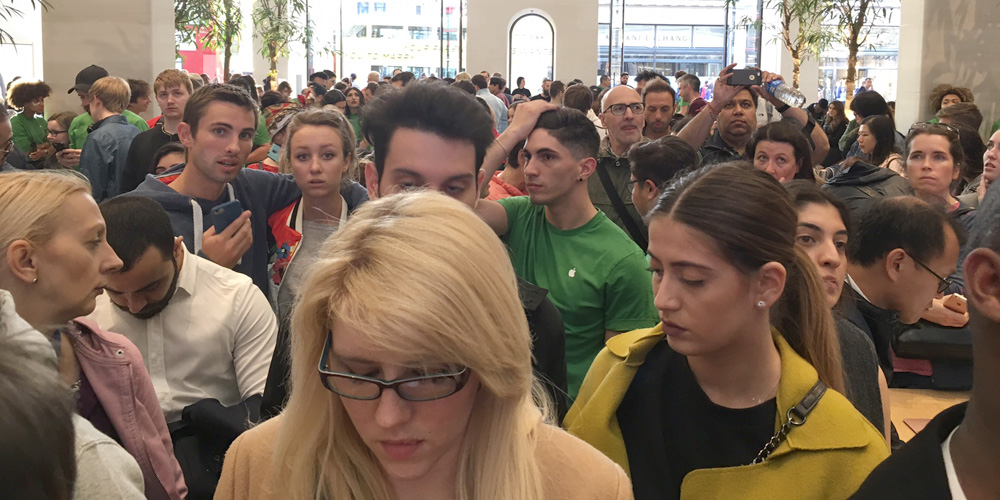 Among the images that Apple proudly featured in officially launching its Today at Apple initiative was one from an event I attended myself: an acoustic concert at London’s Regent Street store.

The official photo of the event, below, shows singer Dua Lipa performing one of the tracks from her upcoming new album, while smiling customers enjoy the show.

That was an accurate reflection of the event. The singer gave an excellent performance to an appreciative audience. But it didn’t provide the complete picture. The top photo, taken with my iPhone from my position close to the stage area, shows another aspect of the event: massive crowding with basically zero attempt at controlling those crowds …

You had to register to attend the concert, and places were theoretically limited to 250. But there was nothing at all to control numbers. The area wasn’t roped off in any way.

You could voluntarily check-in with staff, but it was clear that many of those who didn’t get places turned up anyway, and there were also people who were in the store when they saw from the huge screen that it was happening and decided to stay for it. There was no attempt by staff to find out who was registered and who wasn’t – and no system in place to make this a practical proposition.

We were fortunate to get there early enough to get places close to the front, but there would have been many more registered people who arrived before the start and would have been left standing just inside the front doors.

There was also a woman who told staff she was unable to stand for an hour, and while a couple of members of staff said they would try to find her a seat, the crowds meant this was basically an impossible task at which they failed. Not great for a company which says accessibility is a core value.

The crowds additionally meant that it would have been a nightmare to either try out any of Apple’s products or make a purchase. The display tables were packed with people watching the show, and staff wanting to sell anything had to fight their way through the throng to fetch products.

Granted, this was a special event designed to highlight the initiative. The vast majority of the events are the same workshops that have been offered for many years, and even with extra publicity aren’t going to attract those kind of crowds. But if Apple intends to make special events a regular feature, it has to manage the space a lot better than it did at the weekend.

I wrote before that I’m all in favor of Apple highlighting one of its best-kept secrets. Workshops are a great way to learn how to get more from Apple hardware and software, and also a place to get inspired about creative projects. I also support the notion of Apple Stores becoming places you go to try products, and to get informed about them, while most sales are made online.

But Apple also needs to remember that the primary function of a retail store is to allow customers to see the products, experience them and – yes – buy them. Almost every Apple Store I’ve visited has already been unpleasantly crowded. Adding special events into the mix requires it to develop proper processes to handle the crowds. Otherwise all that is achieved is that a lot of would-be customers get driven out of the stores.