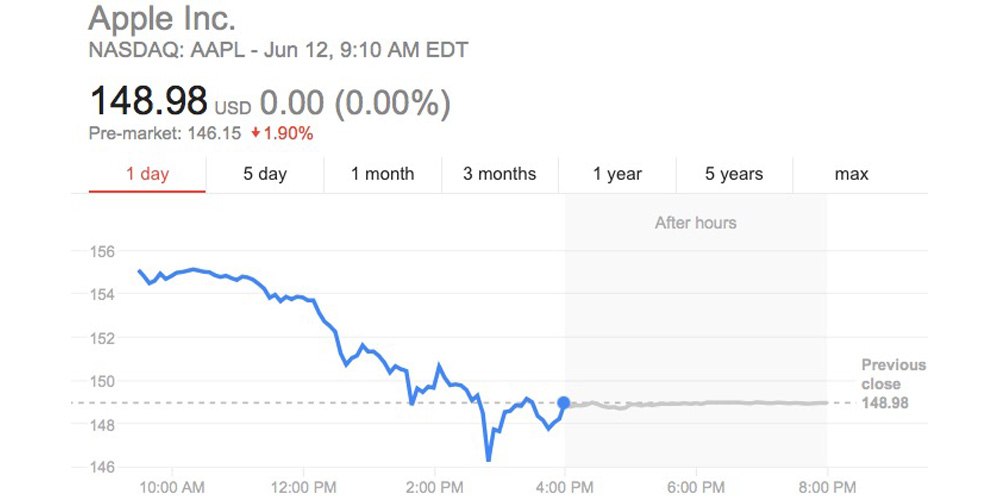 Apple is just one of a number of tech companies to have suffered as European and Asian markets followed the slump seen in the U.S. on Friday, reports Reuters.

Technology stocks fell heavily across Europe and Asia on Monday after the worst day for Apple shares in more than a year, while the euro and European bonds were lifted by pro-European news in France and Italy.

It was set to be a groggy start to the week for Wall Street [.N] after the hangover of Apple’s near 4-percent slump on Friday hit rivals including Samsung and Europe’s big chipmakers STMicro and Dialog.

There appears to be no single, easily-definable cause for the loss of confidence, with Mike Bailey, director of research at FBB Capital Partners, telling CNBC that ‘you’re not seeing any major fundamental factors that would drive tech lower here.’

A white paper describing Nvidia as ‘a casino stock’ and the political uncertainty in the UK following the election results do, though, appear to have played a role. No single political party now has overall control in the UK following prime minister Theresa May’s disastrous decision to gamble on increasing the government’s majority.

The only specific Apple factor appears to have been the Bloomberg report suggesting that the iPhone 8 won’t be able to offer the same high-speed data as competitor smartphones.