iPad Pro Diary: I thought I could resist the 10.5-inch model; I was wrong … 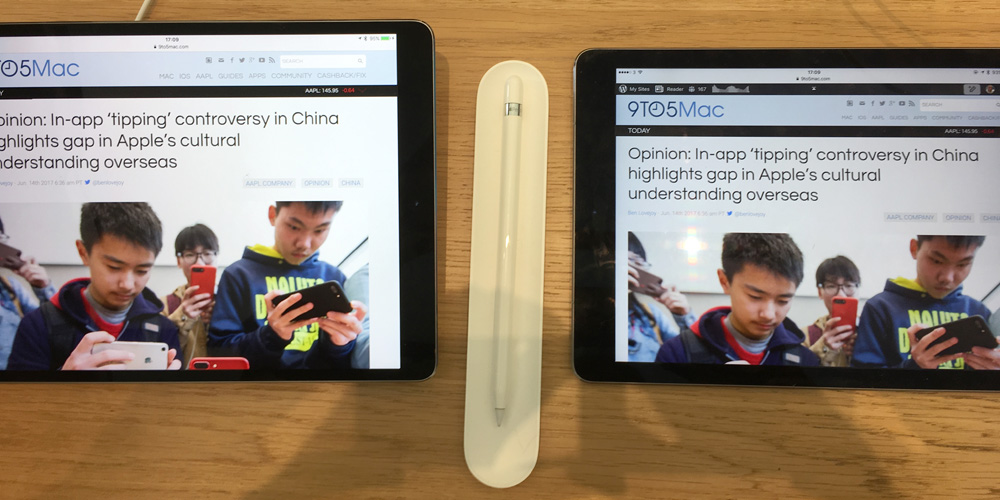 Upgrading more often than the average person is an occupational hazard of gadget addicts – and even more so of tech writers. But I do at least try to resist when an update is a relatively minor one.

I’d hoped that would be the case with the 10.5-inch iPad Pro. After all, I already owned the 9.7-inch Pro, so already had some of the more advanced features like True Tone. And 10.5 inches isn’t that much bigger than 9.7 inches, right?

Still, I had to be sure, so I wandered into the Regent Street Apple Store to try one out …

Apple says the A10X Fusion chip and upgraded GPU means it’s 30% faster overall and has 40% faster graphics, but I can’t say I’ve ever noticed any lag on the 9.7-inch model, so this seemed entirely academic.

I picked it up and started playing with it. I did notice the smoother scrolling, and that was nice and all, but didn’t seem a big deal. Certainly not enough reason to upgrade.

The new screen is brighter – 600 nits versus just over 500 – so I put my 9.7-inch model next to it to compare. The difference there was, I had to admit, significant. I generally use my iPad at around 50% brightness indoors, but do boost it to 100% outdoors, so more brightness is welcome. But, again, not enough of an improvement to justify an upgrade.

The camera improvements are relatively minor, and I don’t often take photos with my iPad, so once more, no biggie.

The second-gen Touch ID sensor – borrowed from the iPhone 6s and up – is more responsive, but that’s a pretty desperate justification for an upgrade.

So, after playing with the iPad for 15 minutes or so, I put it back on the table and walked away. I then sat down to use my 9.7-inch Pro. Which immediately felt small.

It was a similar story with that smooth scrolling. It felt like a very minor improvement, hardly worth noting – until I went back to my old iPad. Then it seemed a bigger deal.

I guess I should have seen this one coming. When I tried out the 12.9-inch iPad Pro for a week, I absolutely loved that big screen. My main concern was the decreased portability. Not just when out and about, but I also found the size too unwieldy for use as an ebook reader in bed. In the end, I concluded that it couldn’t replace my 9.7-inch iPad, and I couldn’t justify owning both.

But I did miss that screen size.

When I did my review roundup, I noted that Jim Dalrymple described the 10.5-inch iPad as ‘the Goldilocks of iPads.’ Not too big, not too small, just right.

My 9.7-incher is the 128GB one. I’d never run out of space, but had consistently used more than 64GB, so opted for the middle tier again, this time getting 256GB for my money. Cellular model, of course – the benefit of instant net access everywhere without the hassle or battery hit of using my iPhone as a hotspot makes that one a no-brainer for me. And Space Gray because Apple still doesn’t offer a black one, and the silver one has a white surround.

In previous iPad Pro Diary pieces, a number of commenters tried to persuade me to buy the Apple Pencil. I felt there was no point: I can’t draw to save my life, and not even I can read my handwriting. I type absolutely everything, down to and including shopping lists.

But with Apple touting the much more responsive performance, I thought I’d at least try it out in the store. I have to say that with the faster refresh it’s an incredibly impressive gadget. It really does feel like using a pen on paper, palm-rejection is perfect and there is no sense of lag.

However, the iPad’s attempt to interpret my handwriting was as laughable as I’d expected it to be. Not because the iPad isn’t any good at handwriting recognition, but because my handwriting is utterly unrecognizable. Except perhaps by a spider.

We’re looking for a new home at the moment. Visiting places, laser measurement device in hand, it would actually be handy to be able to do a quick sketch and add some measurements. Maybe I’d use it for that? And if not, my girlfriend can draw, so perhaps she’ll use it? I decided to buy it for now and then see whether it earns its keep.

So, one 10.5-inch iPad Pro with Apple Pencil ordered. I pick it up this evening, and will of course update after a few days of use.