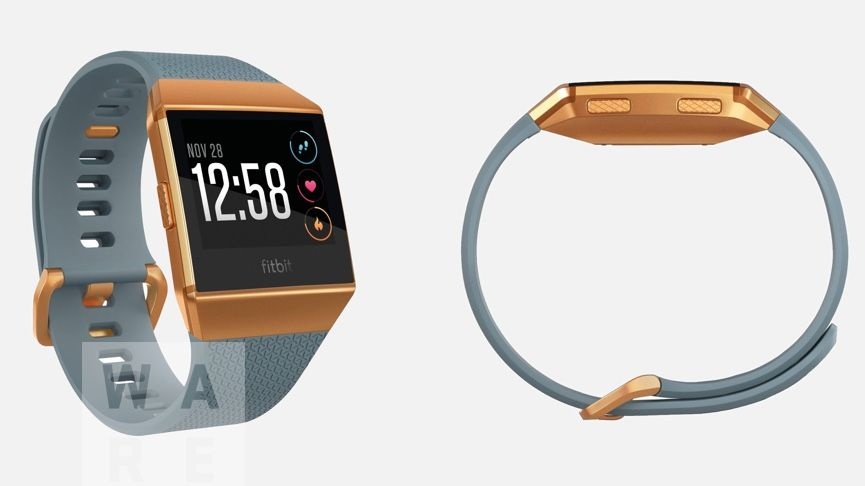 Following its acquisition of Pebble last December, Fitbit has been rumored to be working on its own smartwatch for a release at some point this year. We saw a couple renders of Fitbit’s latest wearable back in May, but a new batch of images from Wareable shines new light on what to expect from the upcoming Apple Watch competitor.

For the most part, these latest renders line up with ones that we saw a few months ago in regards to the overall design of Fitbit’s smartwatch. The front showcases a touchscreen color display, and there are three buttons flanking it – one on the left and two on the right. Wareable has confirmed that the smartwatch will be available in three colors, and these are to include a silver case/navy band, rose gold case/blue band, and a dark gray or black case/black strap. The new watch looks very similar to the Fitbit Blaze that was released in 2016, but there’s one big difference that lives on the bottom of the product.

Looking at the back of Fitbit’s watch, we can see that the metal body extends outward a bit from the rest of the watch – likely a design move to allow the built-in heart rate sensor to get more accurate readings. Additionally, these renders reveal that Fitbit will be moving away from green optical sensors (like what’s used on the Apple Watch) in favor of two red ones.

Why is this a big deal?

The move from green to red optical sensors is more than just a color change. Assuming that the red hue of these sensors indicate that Fitbit’s watch will be using infrared technology on the smartwatch, this suggests that it will be able to not only be able to read heart rates more accurately, but that it will also be able to track your oxygen levels and other vitals.

In addition to this, we can also expect Fitbit’s smartwatch to provide the standard affair of step-counting, sleep-tracking, on-screen workouts, notification support for your connected phone, and plenty more.

We still don’t have an exact release date or price for Fitbit’s smartwatch, but the company did confirm to Wareable that the watch is “on track and that it will be available for the holiday season.” The Apple Watch still offers the best combination of fitness tracking and smartwatch functions, and while past Fitbit efforts have been less than successful to copying this formula, this latest attempt from Fitbit does look fairly promising.