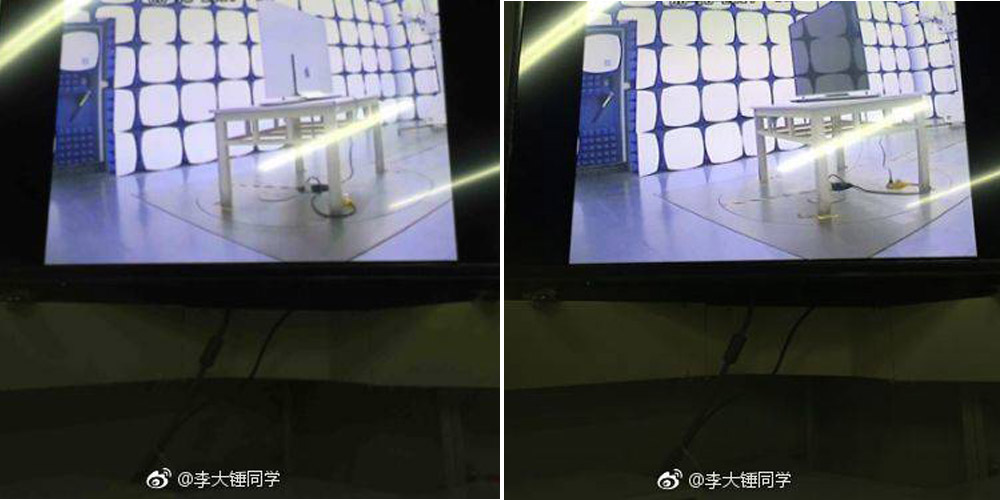 Four photos have been posted to Chinese social media site Weibo claiming to show an ‘OLED Apple television’ of around 60 inches. There are, however, just a few problems with this claim …

First, the images (tweeted by Benjamin Geskin) are so ridiculously blurry and low resolution they could be almost anything. A couple of the shots aren’t even of the screen itself, rather a video image of it. The two remaining photos look like they were taken with an Apple Quicktake camera circa 1994.

While some genuine shots are poor quality – for example, those taken in low light or surreptitiously so that they can’t focus properly – this is usually a sign of faked shots, using deliberately poor quality to stop anyone seeing enough detail to spot things like Apple stickers applied to unrelated devices.

Second, even if the Apple logo is real, there is nothing to identify it as a television rather than a monitor, and no evidence of it being an OLED device.

Third, while there have been past rumors of Apple exploring the idea of creating a full television set, even the most persistent flag-bearer for those eventually gave up on the idea. Gene Munster started in 2011, predicting that the device would launch in 2012. The following year he predicted that we’d see it in, yep, the following year. He stuck to that one for some time before predicting in 2014 that it would be launched in 2016. He finally gave up on the idea in 2015.

Televisions are a highly competitive business where people tend to hold on to them for a long time, so not an obvious fit for a company that likes to make high margins and wants people to upgrade regularly. Additionally, the trend today is to separate the display and smart functionality, and use an Apple TV, Roku or similar as the smarts. That can be upgraded at an affordable cost while retaining the display.

The test device shown in an anechoic chamber could be genuine – perhaps a testbed for the pro display Apple has promised – or it could be fake. But there is no reason at all to think it’s an OLED Apple television.