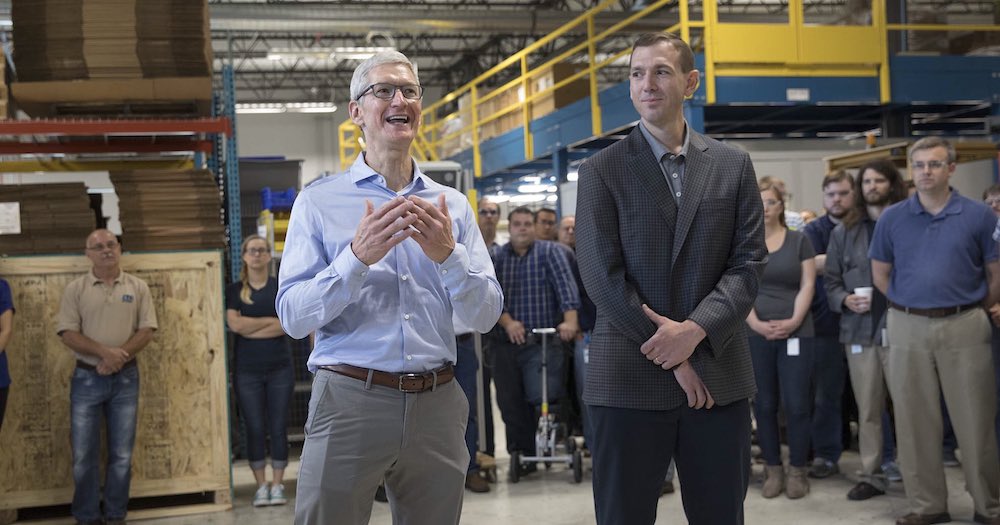 [Update: Cook traveled to Iowa and met with Governor Reynolds. Apple has shared an official press release on the new data center, which will be 400,000 square feet and run on 100% sustainable energy.]

Tim Cook visited one of Apple’s third-party partners in Cincinnati this morning and is reported to be arriving next in Des Moines, Iowa as a press conference will share more about the company’s plans for its latest data center.

This morning Cook tweeted his appreciation for CTS, an Ohio business that helps Apple with its testing equipment.

Thanks to the team at CTS in Cincinnati, manufacturers of best-in-class testing equipment for Apple. Enjoyed my visit this morning!

CTS provides quality control and solutions for Apple’s production equipment to run at its best. The company is in involved in a range of fields from aerospace to automotive, medical to industrial.

CTS engineers are experts at analyzing complex problems and developing innovative coating solutions to achieve and maintain peak part performance—and when parts are performing, your factory is producing.

Cook’s next stop is said to be Des Moines, Iowa, where a press conference will detail Apple’s plans for its latest data center. Yesterday, news broke about Apple submitting plans for approval to Des Moines city council and Iowa Economic Development Authority. This morning saw the council hold a meeting to review Apple’s application for investment.

Now, The Des Moines Register says Apple will use 2,000 acres of land to construct two new buildings at an estimated cost of $1.375 billion. Being a data center, potential jobs will be relatively low, but Des Moines expects the new center to bring 50 more jobs to the state as Iowa will give Apple around $207 million in incentives.

Apple currently has two retail stores in Iowa and also does business with over two dozen suppliers in the state.

Apple’s website says the Cupertino, Calif. company employs 129 people in Iowa. It operates one Apple Store in the state at Jordan Creek Town Center in West Des Moines. And the company does business with 30 Iowa suppliers, including Knoxville’s 3M plant, which makes materials for display modules on iPhones and iPads.

Also, does that iPhone in Cook’s pocket look a little taller and narrower than an iPhone 7 to you? 🤔

Thanks to the team at CTS in Cincinnati, manufacturers of best-in-class testing equipment for Apple. Enjoyed my visit this morning! pic.twitter.com/lFLW5caYxw