A new report from Gene Munster today shows how little the iPhone 8 lead times have changed since pre-orders opened on Friday, highlighting how much the iPhone X is affecting sales of the new entry-level models.

Loup Ventures wrote in a research note today that about 8 hours after pre-orders went live for the iPhone 8, lead times for many models were at 1-2 weeks. When checked again on Sunday, not much had changed.

Munster notes the notable change this year is shorter lead times for the iPhone 8 Plus.

The pre-order lead times are playing out as we expected with similar to the lead times as the smaller size iPhone’s over the past three years, but shorter lead times than the larger Plus sizes.

While this could be explained by increased inventory than last year, there are a decent amount of both iPhone 8 and 8 Plus models still available for the September 22 launch day arrival. 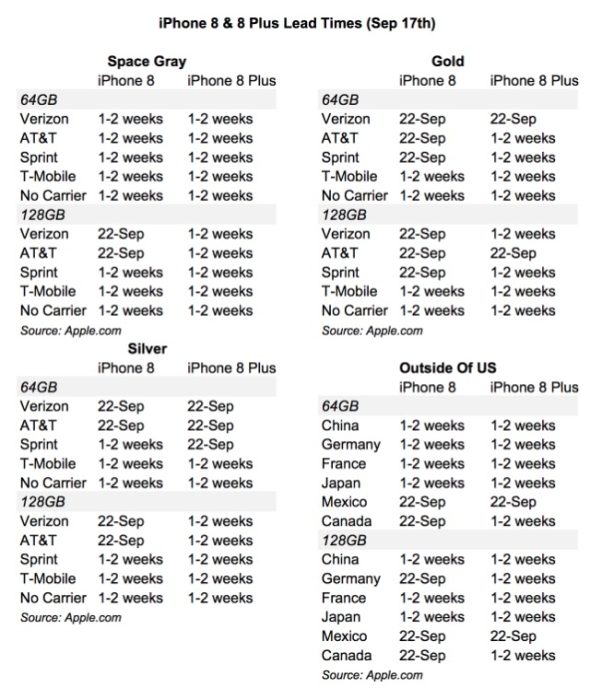 We assume Loup Ventures means 256GB for the 128GB references above

The note predicts that for the next year, iPhone X and iPhone 8 will almost equally make up about 50% of iPhone sales, which explains the iPhone 8 availability.

Another way of thinking of this, iPhone X interest could have possibly lowered iPhone 8 pre-orders by around 50%

While more casual consumers will likely buy the iPhone 8 over the next year, as opposed to those who are apt to pre-order, Apple has definitely segmented demand for its devices by offering three new models this year along with keeping the iPhone SE, 6s/Plus, 7/Plus.

With iPhone X being delayed and reported to be heavily constrained, even into 2018, it will be much more difficult getting your hands on an iPhone X than the iPhone 8.

Munster also notes that Apple Watch Series 3 lead times are 3-4 weeks for almost all sizes and models, along with a prediction that Apple’s latest wearable will give the company a 2% revenue boost for its 2018 fiscal year.

For Apple’s part, the company issued revenue guidance between 49-52 billion dollars for the quarter that includes the initial iPhone 8 launch, suggesting expected sales in line with previous launch quarters despite the iPhone X not launching until next quarter.