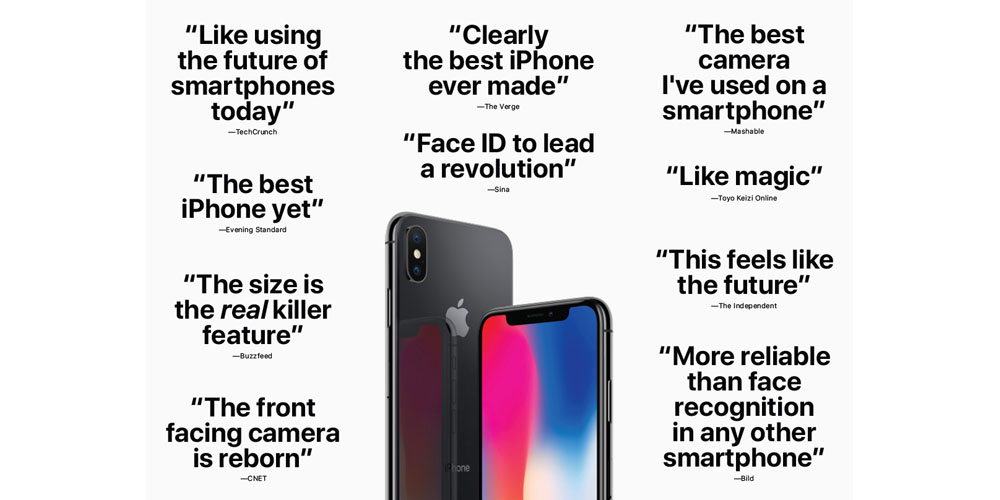 Apple has just issued a press release rounding up some positive comments from early reviewers of the iPhone X. This is an unusual step from the company, which is taking a different tack to reviews of this year’s flagship phone.

The release has a one-paragraph introduction, the review excerpts and a one-sentence close.

After testing iPhone X, reviewers from around the world are giving their impressions of its beautiful 5.8-inch Super Retina display, TrueDepth camera, Face ID and Animoji.  Read what they’re saying about the future of the smartphone.

Apple is usually supremely confident about media and public reception of its new iPhones, but this year gives the impression of being a little nervous or insecure.

For early hands-on videos, the company sought out smaller YouTube personalities who were more likely to be flattered by the invitation and grateful for the opportunity. The result was always likely to be particularly enthusiastic videos.

Apple also gave many mainstream publications much less time than usual with the phone before they were allowed to post first-impression pieces, many of them getting less than a day. With limited time to experiment, these early pieces were again likely to focus most on the interesting new features, without having much time to experience any drawbacks in real-life use.

Choosing to issue a release citing review comments further adds to the impression that Apple is less confident about how the phone will be received, and feels it has to work harder to present a positive impression.

It seems odd to me. Yes, the iPhone X is a pretty cutting-edge device, so we can expect a few issues with it. But it also strikes me as a beautiful phone with some really impressive, usable technology, so I’m not sure at this stage why Apple would seemingly be so nervous. It does, though, make me all the more curious how I’ll get on with the phone when mine arrives on Friday.

As usual, I’ll be writing my review in a diary format, over a period of a few weeks.

You can read the full release below.

iPhone X: What reviewers are saying

Reviewers across the globe weighed in on iPhone X and its many new features.
After testing iPhone X, reviewers from around the world are giving their impressions of its beautiful 5.8-inch Super Retina display, TrueDepth camera, Face ID and Animoji.  Read what they’re saying about the future of the smartphone.
Mashable “Apple’s iPhone X is the beginning of something new. Everything the iPhone X is serves as a roadmap for future iPhones.”
BuzzFeed “Face ID worked as promised: with sunglasses, without sunglasses, with my hair up, with it down, at night in the dark, or during the day.”
Creative Live Blog “The OLED display is insanely good. The contrast is unlike anything I’ve ever seen. And the edge to edge / bezel arrangement is stunning. It somehow further humanizes the device. I feel like I’m holding my photos and videos…not a device on which to view them.”
The Wall Street Journal “Face ID is secure, fast, reliable and very easy to use. But even if it is Halloween, you’ll be headed for trouble if you go trying to clone yourself.”
CNET “After 10 hours on the streets of San Francisco, mostly in and around Fisherman’s Wharf, I was impressed by how Portrait Mode transformed the everyday selfie into a respectable and elegant photo.”
The Evening Standard “Apple’s implementation of the camera is flawlessly done and THE Animoji are fantastic.”
TechCrunch “What I can tell you is that [Animoji] are cute and super funny. The way that the camera is able to accurately track and map your face, the physics in the models and the fun factor of being able to ‘wear a mask’ combine to make something that’s actually a ton of fun.”
iPhone X will be available in Apple retail stores Friday, November 3 and is also available for pre-order on apple.com.