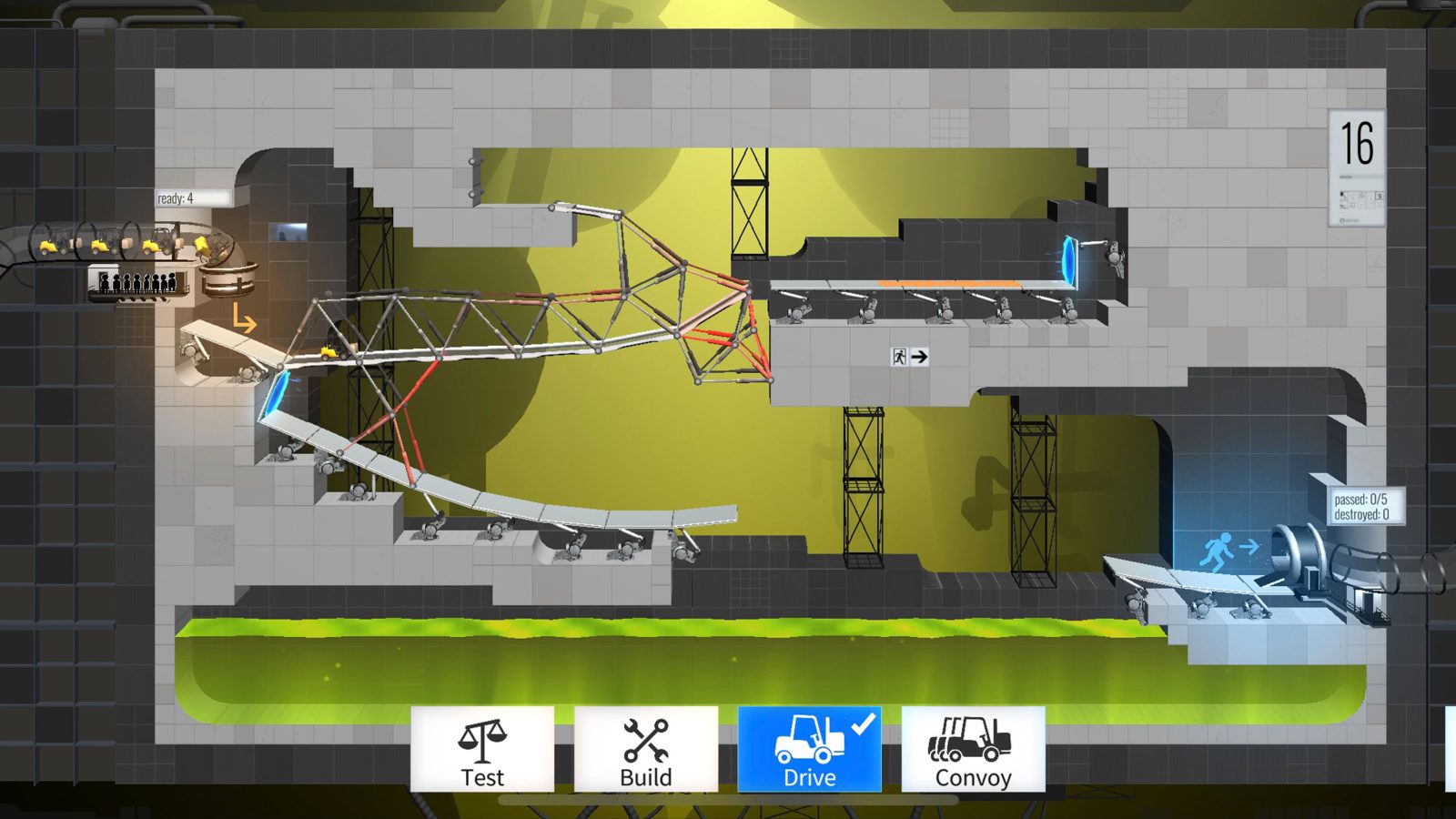 In most circumstances, I’d be repelled by a chilling, robotic voice mocking me from inside of my phone. The one exception is if that voice belongs to GLaDOS, the sharp-witted, snide, and devilishly funny computer that provides background commentary for Portal and Portal 2, the hit puzzle games that became instant favorites of mine from the minute I picked them up.

Now, GLaDOS is back – and on the iPhone, in a new title that combines the story and visuals of the Portal franchise with the physics and gameplay of the popular line of Bridge Constructor games. Bridge Constructor Portal launches tomorrow on iOS, and we’ve been testing it out to see if it can live up to its name.

If you’ve played any of Headup Games’ other titles in the Bridge Constructor series, (or World of Goo for that matter) the concept of Bridge Constructor Portal will be immediately familiar. The objective of the game is to complete a series of test chambers – 60 in this case – by building platforms and frameworks to successfully transport a vehicle to an exit inside of the massive Aperture Science facility.

For players new to the concept, Bridge Constructor Portal does a great job of guiding you through the basics until you’re on your way.

Your guide is none other than Ellen McLain, the voice of GLaDOS in Portal and its sequel, available on Steam. The game’s writers flawlessly captured the wit and tone of GLaDOS, and McLain perfectly recreated the sound of her original recordings, down to the robotic cadence and personality quirks that make GLaDOS instantly recognizable.

You’ll find this attention to detail throughout the game, and veteran players will appreciate the many Easter egg references to past Portal games sprinkled throughout.

Headup Games collaborated directly with Valve to make sure they got every detail right, and it shows. Bridge Constructor Portal is an officially licensed member of the Portal family, with dialog, sound effects, and test chambers developed in collaboration with the original Portal team. While the game’s graphics strongly resemble the feel of Fallout Shelter for iOS, the visual style is unmistakably Portal.

All of the familiar gameplay elements from the desktop games have made their way to iOS – cubes, sentry turrets, propulsion gel, aerial faith plates – the list goes on and on. Those who have played Portal before will get extra enjoyment from seeing these items return, but it’s not essential to have played prior games in the series.

Test chambers start out fairly rudimentary, but get progressively more challenging and time-consuming as new concepts and gameplay elements are quickly introduced. I was happy to see that a handy guide of construction best practices was available from the game’s menu.

If I’ve learned anything from my time playing, it’s that bridge engineering is not my specialty. Forklift after forklift met their fate under my watch, plunging into deadly slime or being vaporized by powerful lasers, as Aperture Science employees bailed out of the doomed vehicles just in time.

After you’ve successfully completed a level and proved your construction adequate to guide a vehicle to the exit, you’re presented with the amount of money wastefully spent on infrastructure, and the option to convoy a series of vehicles to the exit. More often than not, my makeshift bridges were able to withstand one forklift, but failed under the weight of multiple. This adds an extra element of challenge to the game for more ambitious players.

I tested Bridge Constructor Portal on an iPhone X, but most players will probably prefer to enjoy the game on an iPad, where tap targets will be larger, and less pinching and zooming will be required. I found myself frequently misplacing bridge components, which were thankfully easy to remove with a quick double tap.

With how widely loved and highly regarded the Portal series is, players will have understandably lofty expectations for a follow-up. Fortunately, Headup Games has done a stellar job of capturing the austere charm of Portal and bringing it to phones and tablets for the first time. Gameplay is fun and extensive enough to make the modest price tag feel like a steal.

Bridge Constructor Portal is available starting December 20th on iOS and Android for $4.99 and on macOS, Windows, and Linux for $9.99. Versions for Nintendo Switch, PS4, and Xbox One will be available in early 2018.