Review: The Zoom iQ7 Lightning mic is a suitable companion to your Shot on iPhone toolkit 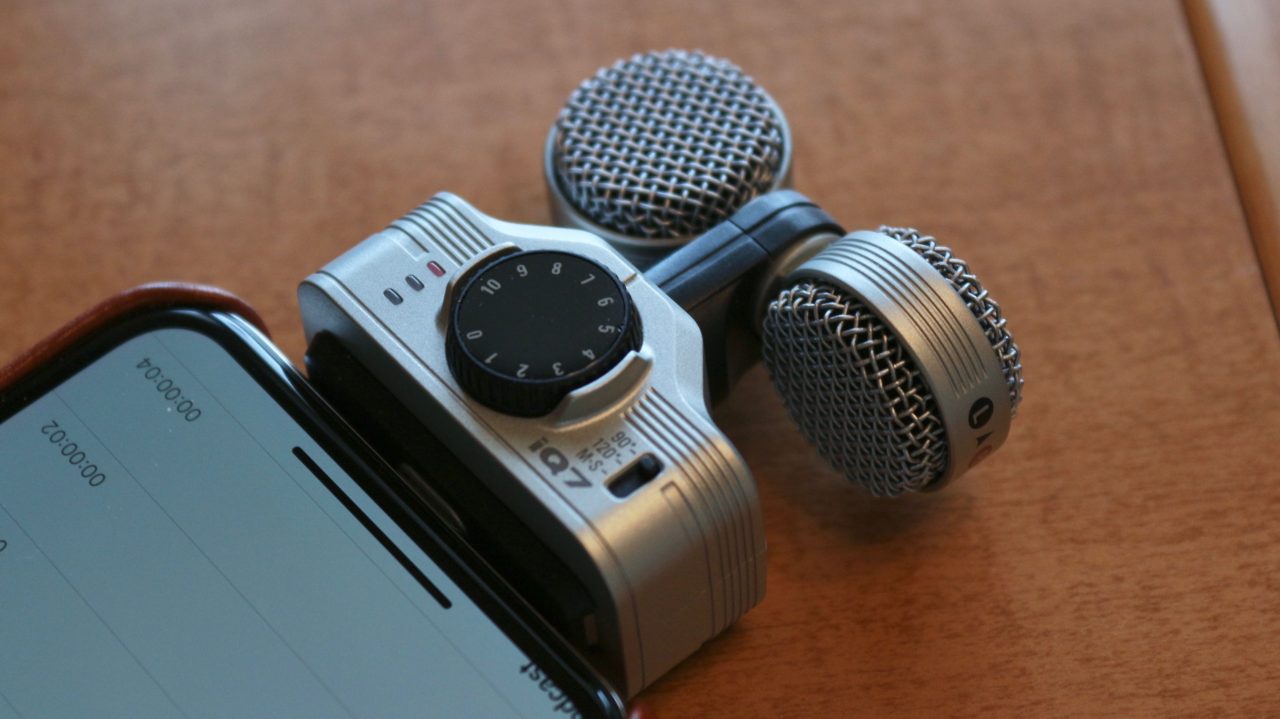 While I’ve been highly impressed with the video capabilities of recent iPhone cameras, the accompanying microphone has always left something to be desired. Recently, I found myself in need of a more professional audio solution for on the go video. Looking for an affordable, compact, and high quality option, I decided to try out the Zoom iQ7 microphone for Lightning-equipped iOS devices.

Those seeking improved audio from their iPhones will find a narrow but competitive market of products to choose from. In 2016, 9to5Mac’s Jeff Benjamin was impressed by the Shure MV88 external Lightning mic. I considered the same option for myself, but opted for the more budget-friendly Zoom iQ7 instead.

Zoom is no stranger to the audio market, producing a wide range of high quality microphones and field recorders for various applications. They also offer the iQ5 and iQ6 mics for iOS devices. The iQ7 is unique because it is a mid-side stereo condenser mic. That means that users can adjust the width of the stereo recording even in post-production, completely changing the environmental character of the audio. The advanced technique is accomplished through the microphone’s design. Two mic elements sit on top at opposite angles. One element captures the signal in front of it, and the other captures left and right ambient room tone.

The iQ7 is lightweight and compact. Unfortunately, weight savings come at the cost of material quality. The entire device is made of plastic, even the microphone capsules themselves. While I wasn’t afraid that the mic would break, I did take care when adjusting the elements on top, which can be rotated bidirectionally depending on the source of your audio and position of device.

The mic is attached with a standard Lightning connector in the bottom of any modern iOS device. A small spacer around the port can be removed if desired to adjust the device’s fit. I used my iQ7 with both an iPhone X and iPhone 7 Plus paired with Apple’s official leather cases and never ran into any issues.

The iQ7 has a few physical controls around its exterior. A large central knob allows you to adjust the mic’s gain without using software. A small three-way switch lets you choose the microphone’s recording pattern: 90 degrees, 120 degrees, or mid-side. The 90 degree setting records a very narrow pattern of audio in the direction the microphone is pointed, while the 120 degree option captures more ambient sound around from around a room.  Three LED lights indicate the mic’s current recording level, and for more precision monitoring there is a 3.5 mm headphone jack.

I bought my iQ7 primarily to cover CES 2018. While you can use the microphone with the iPhone’s built-in camera app, I brought along my old iPhone 7 Plus as a dedicated audio recording device. The show floor at CES is loud, so I wanted to make sure my microphone was as close to the audio source as possible. All of my recording was done indoors, but if you’re planning on recording outside, Zoom includes a small removable windscreen.

Zoom has made a companion iOS app for its mobile microphones called Handy Recorder. The application allows you to record, edit, and share audio files. It also differentiates between files recorded in all three of the microphone’s recording patterns, and can export WAV files.

Unfortunately, I can’t recommend Zoom’s app. Despite receiving at least yearly updates, the app does not support the iPhone X’s display size. More amazingly, it seems to be still optimized for old 4-inch displays. The UI is somewhat confusing and outdated looking, and file management is cumbersome. I wasn’t able to share audio clips with myself to iCloud Drive or even with AirDrop – I had to use email.

I opted instead to record using Apple’s built-in Voice Memos app. While I was satisfied with the results it provided for the audio I needed, some users might be disappointed to learn that the microphone’s three distinctive recording patterns seemingly cease to function if not using the Handy Recorder app. Switching modes on the microphone did not change the audio in any noticeable way. Power users might prefer to record with Handy Recorder and then use an app like GarageBand for editing controls.

I tested out my iQ7 in multiple environments ranging from interviews to voiceovers. I was impressed by the microphone’s ability to suppress the noise of a crowd while bringing the subject’s voice to the forefront. Audio remained crisp and clear without distorting. The example below was recorded with the Zoom iQ7:

I also used the iQ7 at my hotel room when I was a guest on 9to5Mac Daily, 9to5’s new daily news podcast. While speaking with my colleague Zac over FaceTime audio, I used the iQ7 to make a clean local recording of my voice while he recorded his own audio back at home. The two files were stitched back together by Zac in post-production. You can listen to the episode below:

If you’re looking for a quick and easy way to get clearer, more professional sounding audio out of your iPhone, the iQ7 is a respectable choice. For light voiceover work and recording in noisy environments, it’s a fairly affordable option at $99. Users in search of more robust controls for involved recording and editing might want to stick with a dedicated field recorder, however. An extra $60 will get you Zoom’s H2n Handy Recorder, a dedicated microphone with SD card storage. I’ve used the H2n extensively in the past and was always impressed with its results.

Shure’s MV88 is also still a great option. While it’s $50 more expensive than the iQ7, Shure’s recording and management app is significantly more modern than Zoom’s. Have you used external microphones for your iPhone in the past? What were your results? Let me know in the comments.