HomePod Diary: The best party gadget ever, and the difference between ‘really good’ and ‘great’ 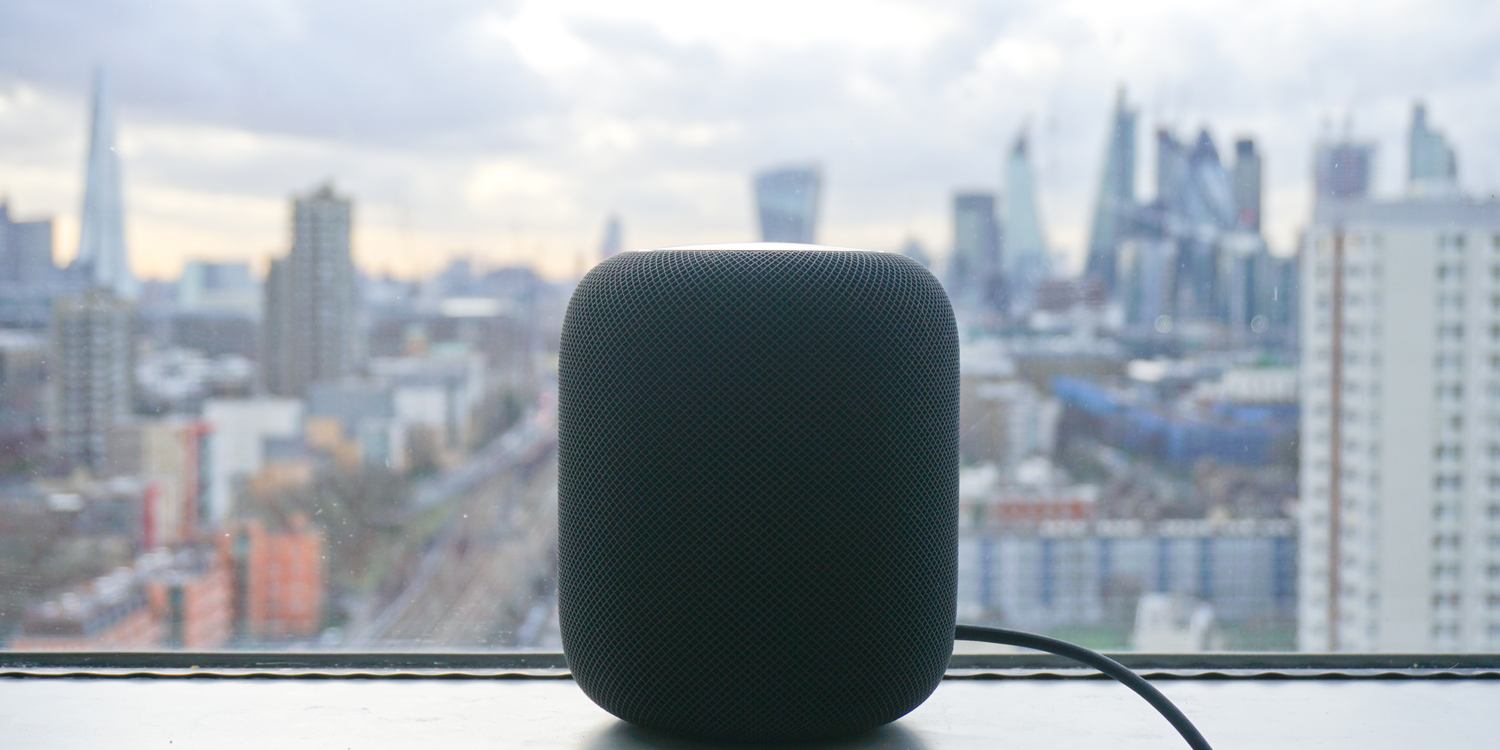 Friday morning, my HomePod arrived; Friday evening, we had a small party. And the belle of the ball was the HomePod.

We had a group of friends round for drinks and pizza. That seemed a good opportunity to put HomePod to the test – both to see what others thought of it as a speaker, and to allow friends to try Siri control …

The tl;dr version is that HomePod may just be the best party gadget ever! I invited everyone to feel free to instruct Siri to play the music of their choice, and nobody needed to be invited twice. I have no idea what impact HomePod instructions have on Apple Music’s idea of my tastes, but I’m now a little bit scared … (You can, of course, switch off ‘Use Listening History’ if you’re seriously concerned about this.)

I’d give Siri a solid 9/10 for her response to a group of drunkards competing for her attention. HomePod failed a few times when it came to requests for specific tracks, though as they weren’t ones I recognized, I don’t know how obscure they were.

There were a few times when Siri didn’t respond at all to a request, but as one of those was a friend who thought it would be amusing to screw up my Apple Music algorithms by requesting Itsy Bitsy Teenie Weenie Yellow Polka Dot Bikini, I’d like to imagine that Siri was just treating the request with the contempt it deserved. Sadly, HomePod did comply the second time the request was made.

Partly, of course, it was the novelty of trying out a new gadget on day one. But I think even without that, it was a great way of letting everyone play the music of their choice. By comparison, the old days of letting people use the Remote app to cue up songs feels positively medieval.

A party with free-flowing wine isn’t the best environment in which to judge sound quality, but I conducted a quick straw-poll. Views were mostly muted until I cranked up the volume and played my favourite reference track, when there were nods of approval.

Back to audio quality

Moving HomePod between rooms, I was seriously impressed by the way the speaker adapted to each. It doesn’t seem to matter what size or shape the room, or where you are in it. As I mentioned last time, it’s not that HomePod is completely without sweet-spots – you can hear minor differences as you walk around it – but that you are immediately back into another one.

A reader asked me how HomePod coped with classical tracks. I don’t listen to a great deal of classical music, but do have a weakness for Bach. Siri’s attempts to understand ‘Play Bach, The Art of Fugue’ were amusing … She had absolutely no idea who I was talking about, and offered me a variety of random tracks by random bands. After a few attempts, I tried ‘Johann Sebastian Bach,’ at which point Siri immediately understood.

Art of Fugue proved a particularly good test. With typical pop or rock tracks, there’s a lot going on, and the beat and the lyrics can carry the day even when the sound quality is so-so. But with a delicate piano piece, there’s really nowhere for a speaker to hide. Close your eyes, and you really can believe there’s a piano in the room. I was seriously impressed.

For singer-songwriter tracks (my favourite genre), the balance of vocals and instruments is spot-on, and the bass is really incredible for such a small speaker. But that wide soundstage so many reviews had mentioned? Well, yes, it was present – but I still felt the reviews had been exaggerating the size of it.

Until I played some live tracks. Then I understood.

Suddenly all the talk of being able to hear directionality from a single speaker made sense. With live tracks, it’s more than merely an impressive trick: it’s actually quite uncanny. The singer, instruments and applause genuinely do sound like they’re coming from different places in the room. Close your eyes, and the illusion of a live performance is absolutely remarkable for a single, puny-sized speaker.

Don’t misunderstand me: it definitely doesn’t compare to stereo. But it is hard to believe how close a single speaker can get. I really can’t wait to try stereo pairing when Apple switches it on.

Even audiophiles seem impressed, albeit comparing HomePod with other bookshelf speakers.

A friend at the party commented on me letting my B&O speakers stand idle while the HomePod did the work. I said that this was mostly because I wanted to get as much exposure to the speaker as possible for my next diary piece, but the convenience of voice control was also a factor in a party environment. He observed that, in some ways, the story of music over the past decade or so has been trading off quality for convenience.

For example, when mp3 players came along, I started listening to what was then rather low-quality mp3s when out and about. As mp3 quality improved, I found that 192kbps was the tipping point for me. At that stage, the quality was good enough that I was prepared to swap the quality hit for the convenience at least some of the time at home. By the time mp3 files hit 320kbps, I was actually perfectly happy with the quality – and Apple’s AAC 256kbps is at least as good.

Most of us aren’t willing to accept audio quality we perceive to be poor, but when the difference is ‘great’ versus ‘really good,’ then the convenience factor does come into play. And for me, HomePod audio quality ticks the ‘really good’ box in exactly the way the Sonos Play 5 did. Maybe a stereo pair of HomePods could close the gap between ‘really good’ and ‘great’ that it would even be a substitute for a proper Hi-Fi system?

And that’s where I come back to the convenience factor …

An audiophile would reject Apple Music out of hand. Apple’s AAC 256kbps streams aren’t as good as listening to a lossless source. That’s something that can be objectively shown to be true, and something audiophiles can hear.

For me, I can just about hear the difference between the two, but only comparing them back-to-back and listening very intently for it. If I sit down and listen to Apple Music for pleasure rather than comparison, then I’m not sat there thinking ‘hmm, the quality isn’t really good enough.’

So for me, the convenience of streaming music edges out the marginal loss of quality.

A single HomePod speaker isn’t yet at that point for me. I very definitely can hear the difference between that and my B&O system. However, once I can pair two of them and get twice the volume and stereo output, then I’m starting to wonder whether I might take a similar view. That the difference is still there, but perhaps justified by the convenience.

And there is no question that HomePod is super convenient. Being able to speak, in a normal conversational tone, from anywhere in the apartment, and have HomePod play the music I’ve requested is great. Being able to pause a track by telling HomePod to do so, tapping the top of the speaker or tapping the button in the Home app – that kind of flexibility really helps.

One unexpected benefit has been that, because I’m not looking at music suggestions in front of me the way I am on my iPhone or Mac, I have to think more about what I want. That actually had me think of artists I hadn’t played for a while.

Also, when playing my Apple Music ‘New music for you’ playlist, ‘Hey Siri, play more of this’ was such an easy way of sampling new artists that I found myself doing more of that than usual.

Less convenient was playing from Spotify. I’ve given it up entirely in favor of Apple Music, but my partner still prefers it. From my iPhone, it AirPlayed fine to the HomePod (once I’d looked up my account details, it had been so long since I’d used them). But from Steph’s iPhone, Spotify could see the HomePod as an AirPlay device, thought it was playing to it – but no sound at the HomePod end.

However, that could turn into a positive thing. Steph seems happy asking Apple Music to play her selections, so I’m secretly hoping this will convert her to Apple Music just so that we have a neater, all-Apple setup …

Similarly, Personal Requests are still not working from my iPhone, despite all the settings being correct. I need to troubleshoot that, but it’s not a priority for me given that I very much see HomePod as a music-first device.

Finally, HomePod’s willingness to respond to anyone’s voice has both pros and cons. Jeff already discussed the potential risks of this with Personal Requests on (and working!). But it also makes it impossible for Steph to use ‘Hey Siri’ with her own iPhone and iPad, because HomePod responds instead. And when I was watching Jeff’s video, my HomePod responded to each one of his ‘Hey Siri’ commands.

It passed the HomeKit control test with flying colors. I said I wanted my partner to be able to control lights from each of 2.5 rooms (alcove kitchen), and Siri not only managed that with ease, but even allows us to do so from the other end of the apartment.

I wrote last time that I’d already decided to keep it. The question was whether it would simply be an additional speaker, or whether it could play a more central role.

It’s proven itself as a Sonos Play 5 killer, offering sound quality at least as good, but in a smaller package and the much greater convenience of Siri control.

But I’m seriously wondering whether we could even consider pairs of them as Hi-Fi replacements. If stereo pairing shifts the audio quality from ‘really good’ to halfway between that and ‘great, then the convenience factor could win out.

Right now, my main reservation is longevity. An all-HomePod apartment would cost over $2000 in US prices, and getting on for the same amount in pounds at UK prices. I paid more than that for my B&O system, but it’s lasted me almost 20 years, so the cost per day is trivial. A HomePod system probably isn’t going to remain relevant for 20 years, and while the build-quality seems excellent, it won’t have been designed with that kind of life in mind.

But the fact that I’m even considering something I’d previously have thought heretical tells you just how impressed I am by HomePod. It may not yet be great, but it is, without question, really good. Apple, please get that stereo pairing working asap – thanks.