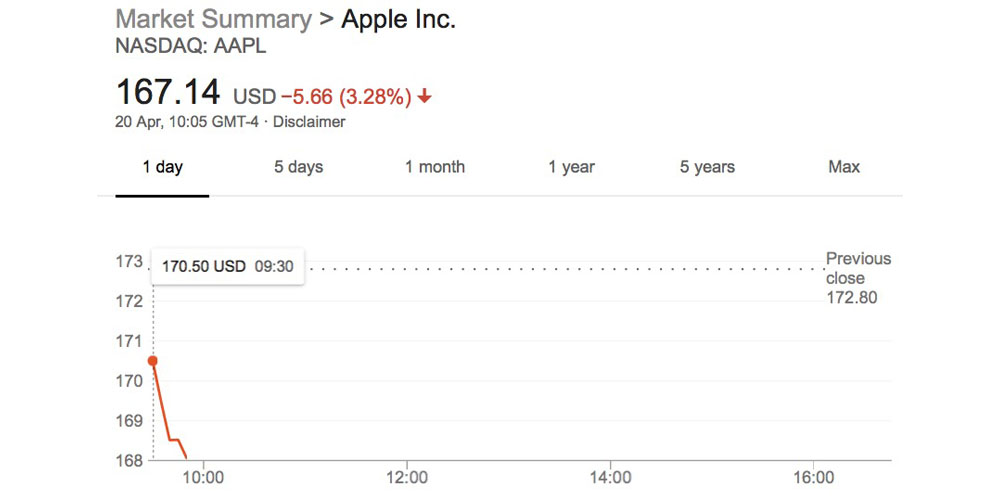 Apple stock has quickly fallen by more than 3% in early trading this morning. At the time of writing, the price had fallen more than $5 to around $167 …

The sharp fall is likely due to potential bad news two days running.

Apple’s sole A-series chip supplier yesterday gave weak guidance, specifically saying this was due to ‘softening’ demand in the premium smartphone market. The company’s revenue forecast was around a billion dollars below market expectations.

TSMC didn’t mention Apple by name, but its fortunes are clearly very closely tied to iPhone sales, and it followed a succession of reports suggesting that iPhone X sales were significantly lower than expected.

This was followed by a WSJ report this morning suggesting that LG was struggling to fulfil its planned role as a secondary OLED screen supplier for this year’s iPhones. This would leave Samsung as the sole supplier again this year, which would mean Apple would be unable to play off two suppliers to get better pricing.

The potential impact could be felt in either lower margins than hoped, or the company unable to be as competitive on price as it might like given seemingly disappointing demand for the iPhone X.