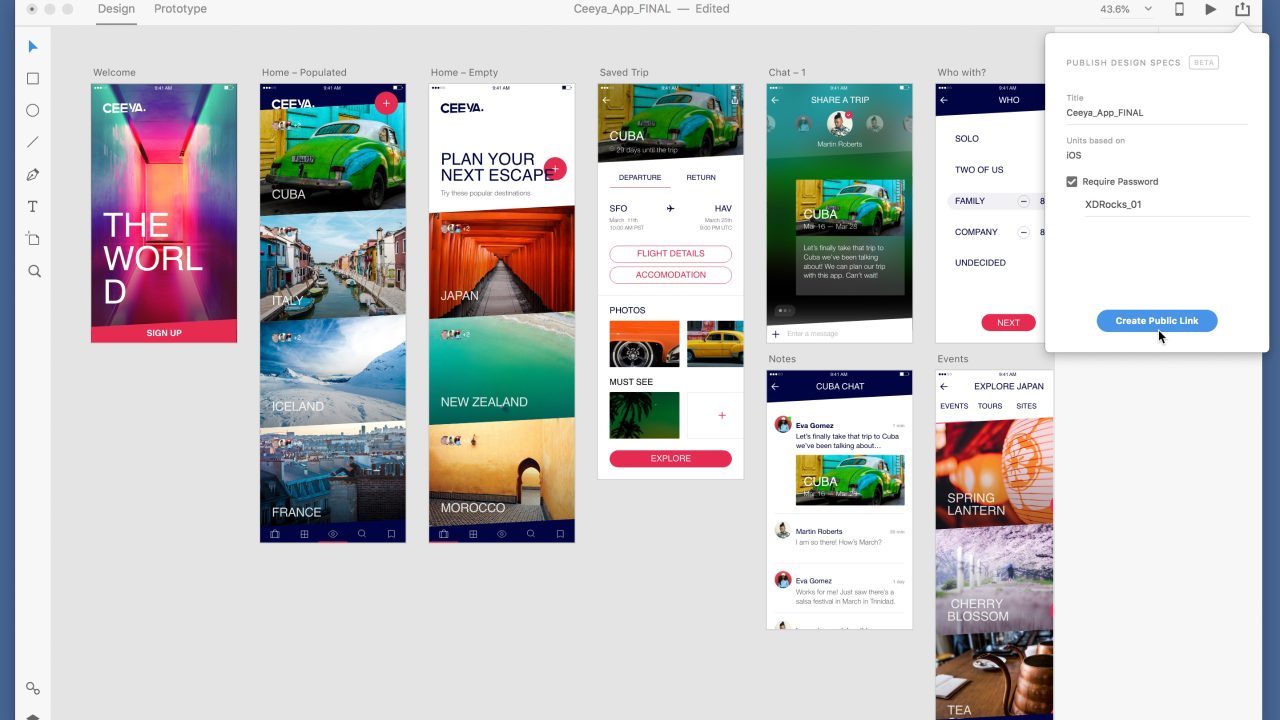 As part of a larger philosophical goal to empower designers and propel entrepreneurs and creative teams forward, Adobe today announced several new tools for user experience design and a significant financial investment into the future of the creative community. 9to5Mac talked with Khoi Vinh, Adobe’s principle designer, and Cisco Guzman, group product manager for Adobe XD about the announcements and Adobe’s vision for the future of the design industry.

While Adobe continues to direct a significant amount of energy toward building digital tools for artists of many disciplines, an increasingly important aspect of the company’s work relates to empowering and educating creative professionals outside of an app. The Adobe Fund for Design is a new, $10 million initiative to support teams that are building creative products and services that shape the future of their industries.

“We have to engage designers and those who build on top of XD and Creative Cloud to transform it into a world-class platform for UX design,” said Vinh, speaking about the fund’s goals. Adobe is seeking out talented individuals and early-stage companies that demonstrate their commitment to empowering the creative world as ideal candidates to benefit from the fund. Resources will be distributed throughout the community in the form of grants and investments, and Adobe encourages customers, developers, and entrepreneurs to apply today.

As competition in the space of creative applications becomes increasingly crowded, Adobe’s scale enables it to serve the market in a way other companies simply can’t. While the company has plans to expand the fund’s scope in the future, it launches today with an initial focus on a relatively new tool, Adobe XD. The decision to pour resources into user experience design was informed, in part, by a survey of 251 hiring managers conducted by Adobe last year. Vinh noted “The survey found that nearly 9 in 10 said that adding more UX design expertise to their organization was a top priority.”

It is perhaps then of little surprise to learn that Adobe has also announced several new features and enhancements for Adobe XD CC, and given us a little sneak peek into the future of the software. “Prior to officially releasing XD, we incubated the tool for nearly two years in the design community,” said Guzman.

Adobe XD was first previewed in October 2015 and initially called Project Comet. A series of public previews throughout 2016 and 2017 helped Adobe gather user feedback before formally releasing XD at last fall’s Adobe MAX conference. In the months that followed, regular updates have added features like Design Specs and third-party integrations.

For the remainder of 2018, Adobe has chosen three areas of focus surrounding XD: extensibility, building more advanced animation and prototyping features, and collaboration and asset management. New for May are several features designed to address productivity. Adobe has outlined some of the more notable changes in detail: 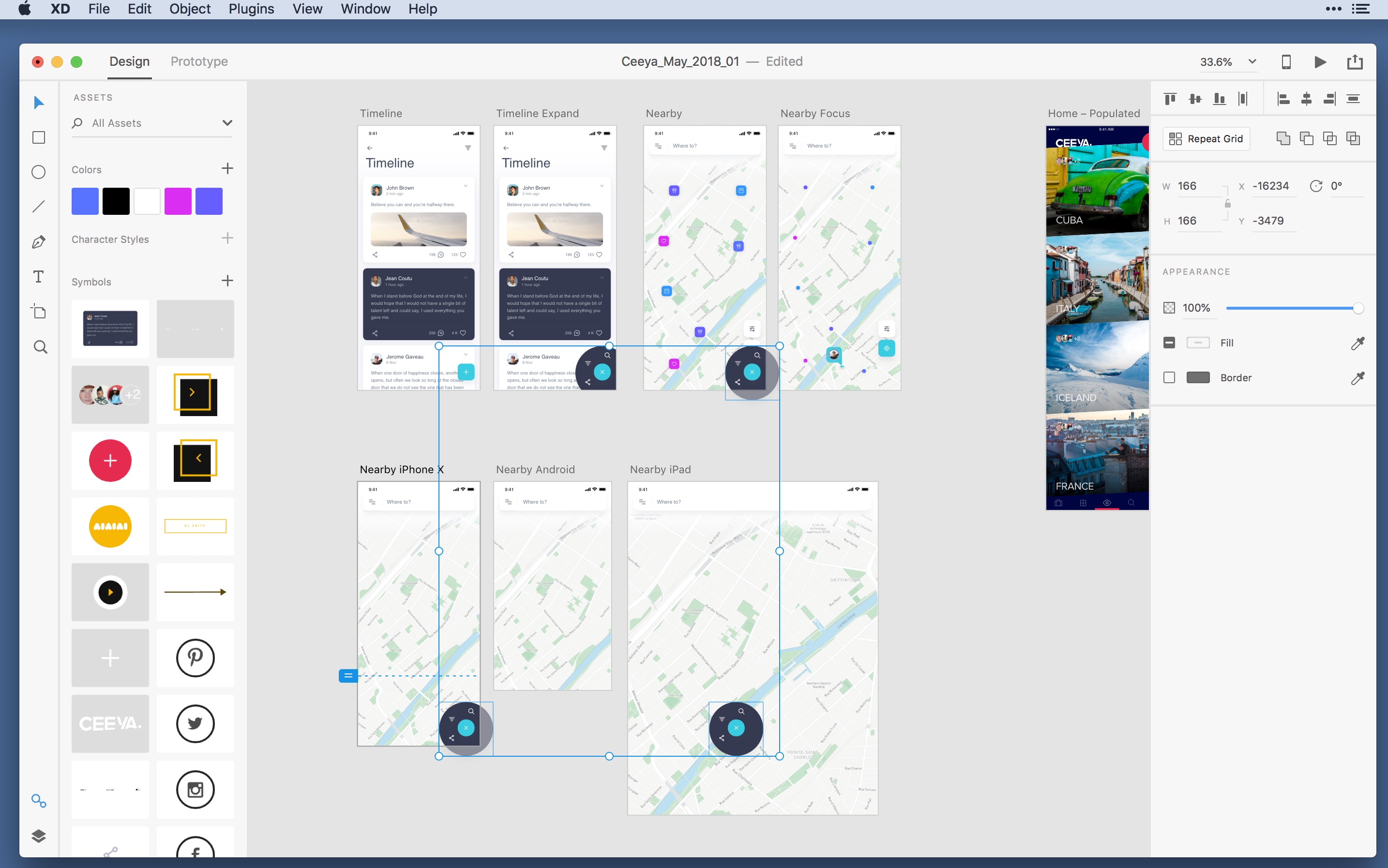 Alongside these features, integrations with Photoshop and Sketch have seen significant performance improvements and fixes. Adobe is also working on several highly requested additions for XD that are still in preliminary stages of development. In an early preview, Guzman shared that Adobe has focused on advanced prototyping, testing tools that will allow designers to add overlays, fixed elements, and timed transitions to their previews. Adobe is even experimenting with an advanced Auto Animate feature, bringing keyframe-style position interpolation to layers. “One of the things that we know about designers is that if you give them a small feature, they’ll do amazing things with it,” Guzman added.

For many, the most significant addition in May’s update will be a new, free Starter Plan that makes available XD’s core features to everyone on both macOS and Windows. Free users will receive a small amount of cloud storage and be limited to sharing one prototype and one design spec at a time, with an upgrade option available.

By building a free tier, Adobe has created an opportunity to present customers of all skills levels with a platform that provides reputable educational resources about UX best practices and correct human interface guidelines. When asked about Adobe’s role in design education, Vihn commented, “The effort to promote XD is not just about getting the tool in front of everybody, but also thinking about what it takes for designers to be successful in general. Education is a big part of that.”

One of Adobe’s new Font Packs.

For existing Creative Cloud subscribers, the May update to XD will be rolling out shortly. New members can now choose from Adobe XD’s free tier, a single app subscription for $9.99/mo, or the full Creative Cloud plan for $52.99/mo. Registration for Adobe MAX 2018 is also now open. This year’s creativity conference will be held from October 15-17th in Los Angeles.