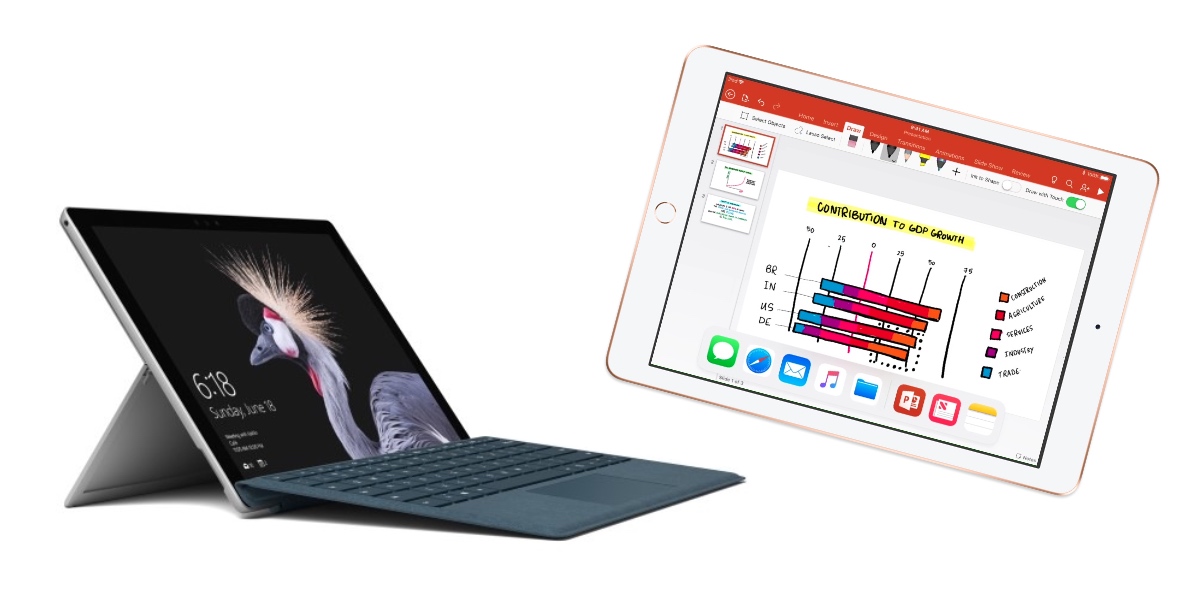 Apple launched a new version of the $329 iPad in March, with a faster processor and Apple Pencil stylus support. The $329 iPad has helped prop up iPad sales significantly since it was introduced last year. Apple has said that the 9.7-inch tablet is its most popular iPad.

Bloomberg reports that Microsoft is looking to compete in this price range with some new Surface tablets that hit $400 price points. The products are expected to debut later this year.

The existing Surface Pro tablets use Intel processors with SSD storage, similar to the CPU chips seen in the 12-inch MacBook. This makes them closer to ‘real PCs’ than an iPad’s technical specs, and can run ‘normal’ Windows apps — Microsoft sells a keyboard cover and stylus accessory separately.

The rumored models in development appear to stick to the same component strategy, relying on Intel x86 chips once again. Bloomberg says the new models should start at about $400, but with plenty of upgrade options for more storage and cellular connectivity.

Although Apple will probably still have the edge when it comes to entry price, with its cheapest iPad at just $329, the report says Microsoft will debut cheaper accessories to help keep prices lower.

This includes a new keyboard cover. Apple does not sell its own keyboard cover for the entry-level iPad as it lacks a Smart Connector. It instead relies on third-parties like Logitech to fill the gap, with Bluetooth keyboard cases costing upwards of $100. Apple Pencil costs $99; Logitech will release a $49 Crayon stylus to education markets later this year.

If this Microsoft story sounds familiar, Microsoft has attempted to launch ~$500 Surface tablets a couple times before, but the products failed to find market traction and were discontinued.

From the Apple side, the company has already launched its cheaper iPad revision for this year. In the fall, Apple is expected to debut an upgraded iPad Pro with iPhone X-esque design; slimmer bezels, no home button, Face ID unlock.

On June 4, Apple will host its WWDC keynote where it will unveil the next major OS updates; iOS 12, macOS 10.14, watchOS 5 and tvOS 12. Whilst there will be some new features that apply to both phones and tablets, some iPad specific features including a home screen UI update have reportedly been pushed back to iOS 13.