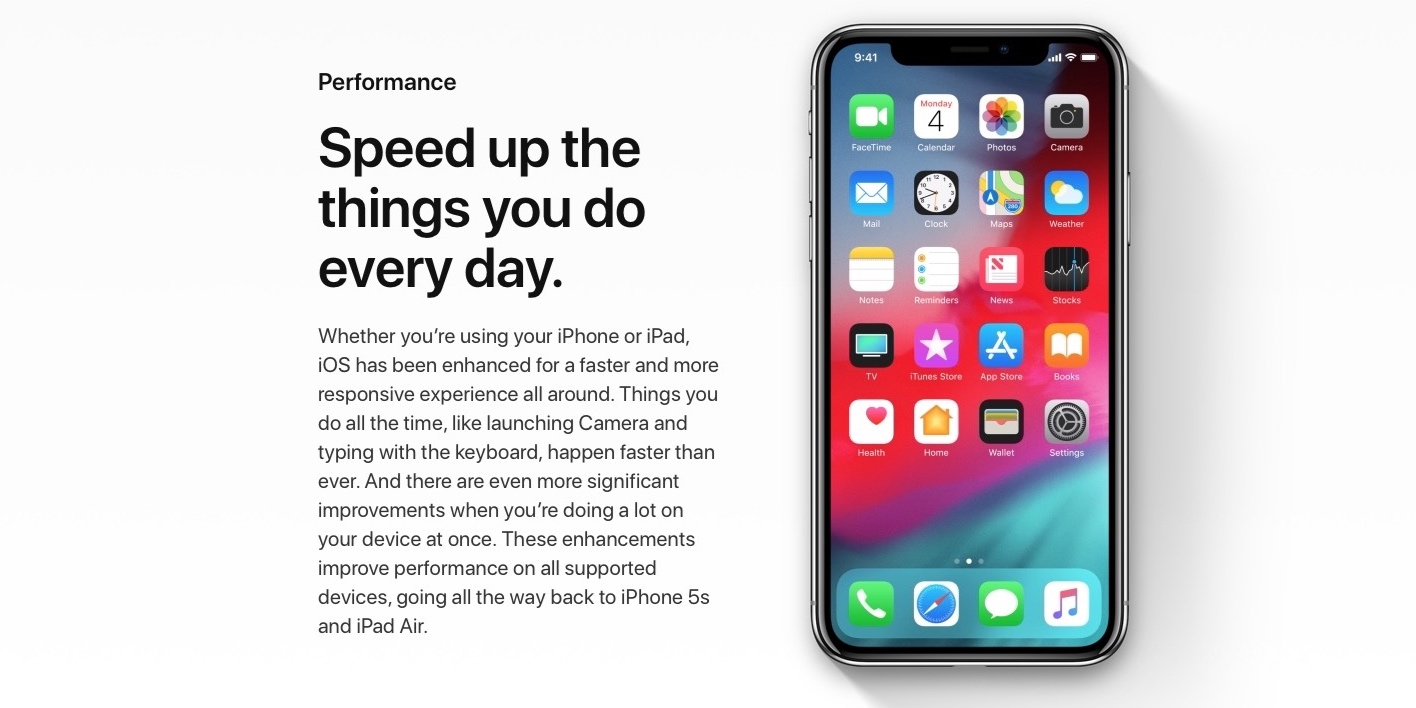 One of the key features for iOS 12 is performance. Apple said it has paid particular attention to its older devices, which is good news as iOS 12 runs on every iPhone and iPad that could run iOS 11. iOS 11 gained a reputation for being buggy and sluggish, and the scuttlebutt over Apple ‘slowing down’ people’s iPhones from #BatteryGate didn’t help that public perception.

Apple is looking to tackle that head on in iOS 12 with performance gains system-wide, with quicker app launches, snappier scrolling and more. We are already seeing iOS speed test videos flood the web, with promising results …

Apple highlights iOS 12 performance features including smoother animations, faster app launch, keyboard display, share sheet presentations and more. App launch is up to 40% faster and up to 2x faster under load, according to Apple’s statistics. The keyboard should appear about 1.5x faster than before, with more responsive typing inputs. Activating the Camera from the lock screen has also been a key focus of iOS 12, and Apple says it should be about 70% faster on an iPhone 6 Plus.

Remember, the version of iOS 12 in people’s hands for testing right now is only beta 1. Apple always iterates on stability and performance through the summer ahead of public release in the fall. What’s rather remarkable about this year, is that many people are seeing better performance on iOS 12 beta 1 than on the shipping versions of iOS 11.4. There is the occasional glitch or layout bug, but in general it looks like Apple is on a great path here.

Even Apple’s latest devices see noticeable improvements like more responsive scrolling, but the big wins are on older iPhones and iPads like iPhone 5s, iPhone 6 and iPhone 6s. I asked on Twitter what people’s first impressions were of using iOS 12 on older hardware and the results were unanimously positive, with several people echoing the sentiment that it actually makes their old devices usable again:

It makes my iPad mini 2 usable again. The keyboard actually pops up fast and apps launch quickly. I noticed this before I heard Craig say it was a thing if that means anything.

My iPhone 7 plus on beta 1 is performing faster. But there are many bugs. Its still better than ios 11

Both my 6s and iPad Air 2 are noticeably faster!

The oldest supported iOS 12 device is the iPhone 5s. In this video from iAppleBytes, an iPhone 5s running iOS 11.4 and an iPhone 5s running iOS 12 are put head-to-head. In most cases, the iOS 12 experience is noticeably superior with faster app launches on top first-party and third-party apps, less dropped frames when scrolling, much shorter delays in the keyboard appearing, and more.

Here’s a nice overview of app launching speeds on iOS 12 running on an iPhone 8; a couple of seconds here and there definitely adds up.

Synthetic Geekbench scores have also jumped, with this YouTuber seeing a 30% jump in the benchmark scores on iPhone 6. Apple said it has tuned the way the software works with the hardware, by ramping the CPU faster, so this probably has something to do with the Geekbench improvements, as benchmarking suites are not unaffected by higher-level optimisations to the UI layer, for instance.

We’ll be keeping a close eye on how well iOS 12 performs on devices, new and old, as we get closer to the fall (likely September) public release.