One of the more exciting things that users are looking forward to in iOS 12 is the new Shortcuts app. While it’s an invite-only beta via TestFlight, we’ve managed to get our hands on it, and this is what we think thus far…

As it’s a beta right now, we’ll try not to go too in-depth as there’s a pretty good chance Apple will change the behavior of certain actions.

The biggest, most notable upgrade is the ability to hook into system events with the Shortcuts app. Previously, with Workflow, the developers had to make workarounds to get some system level functionality to work. Now that the team is working alongside Apple, users benefit. This includes, something Workflow would’ve never been able to accomplish, support for native Siri on not only iOS but also watchOS and HomePod.

While Siri and native integration with the operating system is fantastic, this is still very much the Workflow app, with a few extra bells and whistles. It works and function in a similar fashion by creating blocks that trigger one after another.

Unfortunately, iCloud support isn’t available in this current beta so you won’t be able to do custom commands to HomePod. However, time-sensitive and related Shortcuts will show up on the Siri watch face, even though there’s currently no Apple Watch app (there should be!).

Pre-existing Workflows, as well as those in your previous Workflow library, will automatically get moved over once you install Shortcuts on your device. 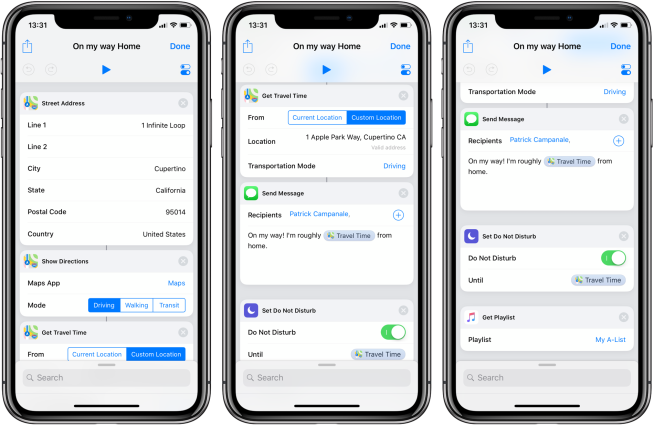 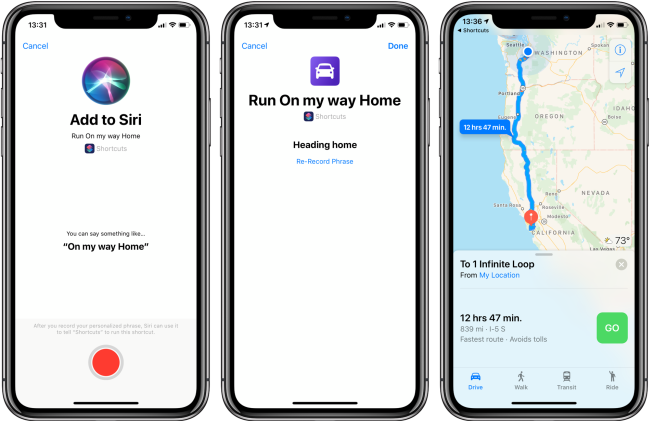 One example of using Shortcuts with Siri is creating a Shortcut that grabs your current location, creates an ETA home, enables Do Not Disturb, and then sends a text to your roommate that you’re on your way home, and plays some music. All while you’re getting into your car, and preparing to leave. And all you have to say is “Hey Siri, I’m on my way home.” Alternatively, you could also just go into the Shortcuts app and start the request there.

It does look like certain annoyances with Workflow are showing in Shortcuts as well. For example, sending a message via a Shortcut still requires you to manually hit the send button, or starting navigation still requires you to hit the Go button to begin. Maybe in the future, Apple will allow things to be truly automated and allow for some serious magic to happen with hands-free Shortcuts with Siri.

We’re excited to see what Apple has in store for Shortcuts. Like we mentioned earlier, the app is still in beta and will likely evolve over time, with more additions and minor annoyances being fixed as the beta cycle comes along. While Apple hasn’t given us a specific launch date, it’s highly likely that we’ll see it launch alongside iOS 12 this fall. One highly anticipated feature with Shortcuts is the ability for third-party developers to implement an “Add to Siri” button within their apps.

Were you able to get your hands on the Shortcuts beta? Are you excited about it? Did you use Workflow previously? Sound off in the comments below!