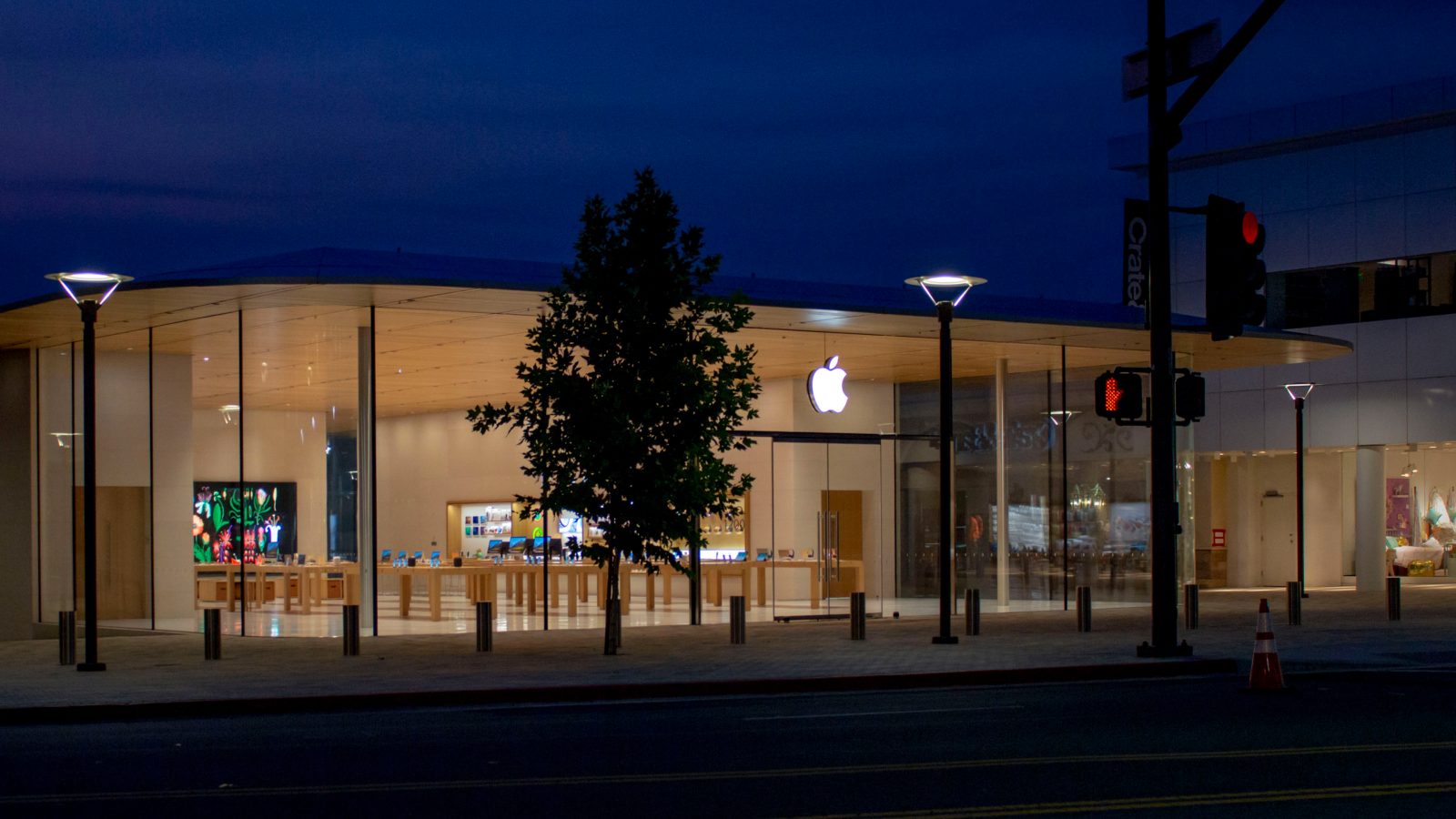 East Bay residents have a new store to explore. This morning at 10:00 A.M. in Walnut Creek, CA, Apple opened their latest retail location to the public. 9to5Mac attended the grand opening to check out the store’s design details and see how the new space will bring the full Today at Apple experience to Walnut Creek.

Apple’s new store is a focal point on the edge of the Broadway Plaza shopping center, positioned at the highly visible intersection of Main St. and Olympic Boulevard. The walkable district is home to numerous boutique restaurants and retailers, including other technology companies like Amazon and Tesla. Like all new Apple stores, the Broadway Plaza location hopes to become a place where people gather to hang out and learn.

The modern store experience begins before the front doors. A tree-lined plaza with stone planters and wooden seating extends from the east side of the building toward a fountain anchoring the square. Outdoor spaces are becoming key design elements for Apple stores, as demonstrated by the newly-opened Apple Piazza Liberty in Milan, which features an amphitheater design.

Step inside any of Apple’s over 100 locations featuring their latest store layout, and it’s immediately clear that while physical products are still important to the company – signature wooden tables still line the sales floor – the key focus is gathering space for Today at Apple sessions. In an interview at Cannes Lions in June, Apple’s retail SVP Angela Ahrendts noted that the series of educational and creative sessions could be the “largest platform we’ve ever had for enriching lives.”

Today at Apple is a bold bet on a reimagined future of retail where events and experiences attempt to provide added value that customers simply can’t get shopping from the comfort of their own homes. Since launching globally last year, Today at Apple has been received favorably especially inside the creative community, where artists like musician Florence Welch and photographer Chase Jarvis have teamed up with Apple to develop sessions.

Yet, the road to success has not been without bumps along the way. In some communities, Apple’s increased presence in public spaces has received pushback, citing excessive commercialization. Similar criticism is unlikely to follow Apple to Broadway Plaza, which has been comprised of retail spaces since its initial construction.

Apple Broadway Plaza has a unique style that blends together elements found in other recent Apple retail projects to create a design that’s the first of its kind. The store’s closest kin are Apple Michigan Avenue and Apple Park Visitor Center, spaces that both also feature floor-to-ceiling glass walls with curved corners and subtly contoured rooflines to match. Generous overhangs on all four sides are paneled with natural wood that extends through the entirety of the store.

Unlike the Chicago and Cupertino projects, however, Apple Broadway Plaza is low-profile and inconspicuous, with no rooftop deck or balcony overlooking a second floor below. Splitting the glass walls on both long sides of the store are sections of limestone blocks, where seasonally-rotating product display cases are installed. 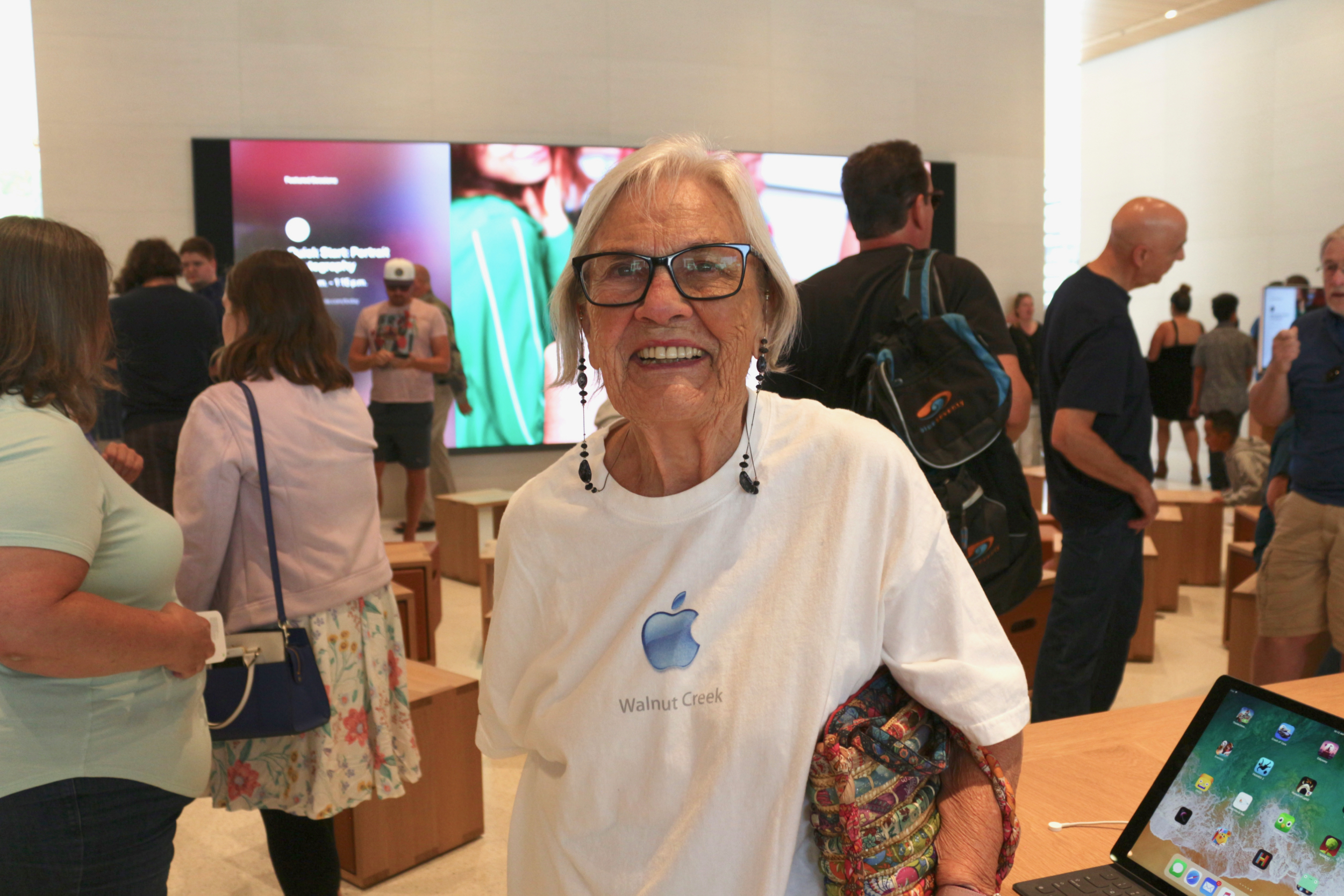 Phyllis O’Shea was one of the first 100 customers through the door at Apple Walnut Creek’s opening in 2003.

Broadway Plaza has been the retail center of Walnut Creek since opening in 1951 with 38 stores, making it the second open-air shopping center in the US. JC Penney and Sears department stores originally anchored the development. In the plaza’s early years, visitors were greeted by a googie-style “Broadway” sign and parking lot, which sat on the same exact plot where Apple’s new store opened today. After real estate group Macerich bought Broadway Plaza in 1985, the plot was redeveloped with a fountain and restaurant, whose last tenant was California Pizza Garden.

Apple’s original Walnut Creek store opened just over 15 years ago, on July 12, 2003. Located just down the street from their new location, it was technically outside of the boundaries of Broadway Plaza. The store’s opening was celebrated with a week of special events, presentations, and workshops. 10 early visitors won an iSight video conferencing camera, and the first 1000 people through the doors received Apple t-shirts. One lucky individual won a “Digital Lifestyle Collection” valued near $2,300 that included a 15-inch iMac G4, Canon PowerShot camera, Canon digital camcorder, and an Epson printer.

At the time, there was only one other store in the East Bay, Apple Bay Street. Over the next few years, Apple would rapidly expand their retail presence in nearby San Francisco and beyond. Until today, Walnut Creek’s store was Apple’s 5th oldest location that hadn’t been significantly altered since opening. Of special note was the original stainless steel facade, a design element that originated at Apple The Grove and quickly became the signature look for most stores during the mid 2000s. Walnut Creek was only the 8th store worldwide with the design at opening. 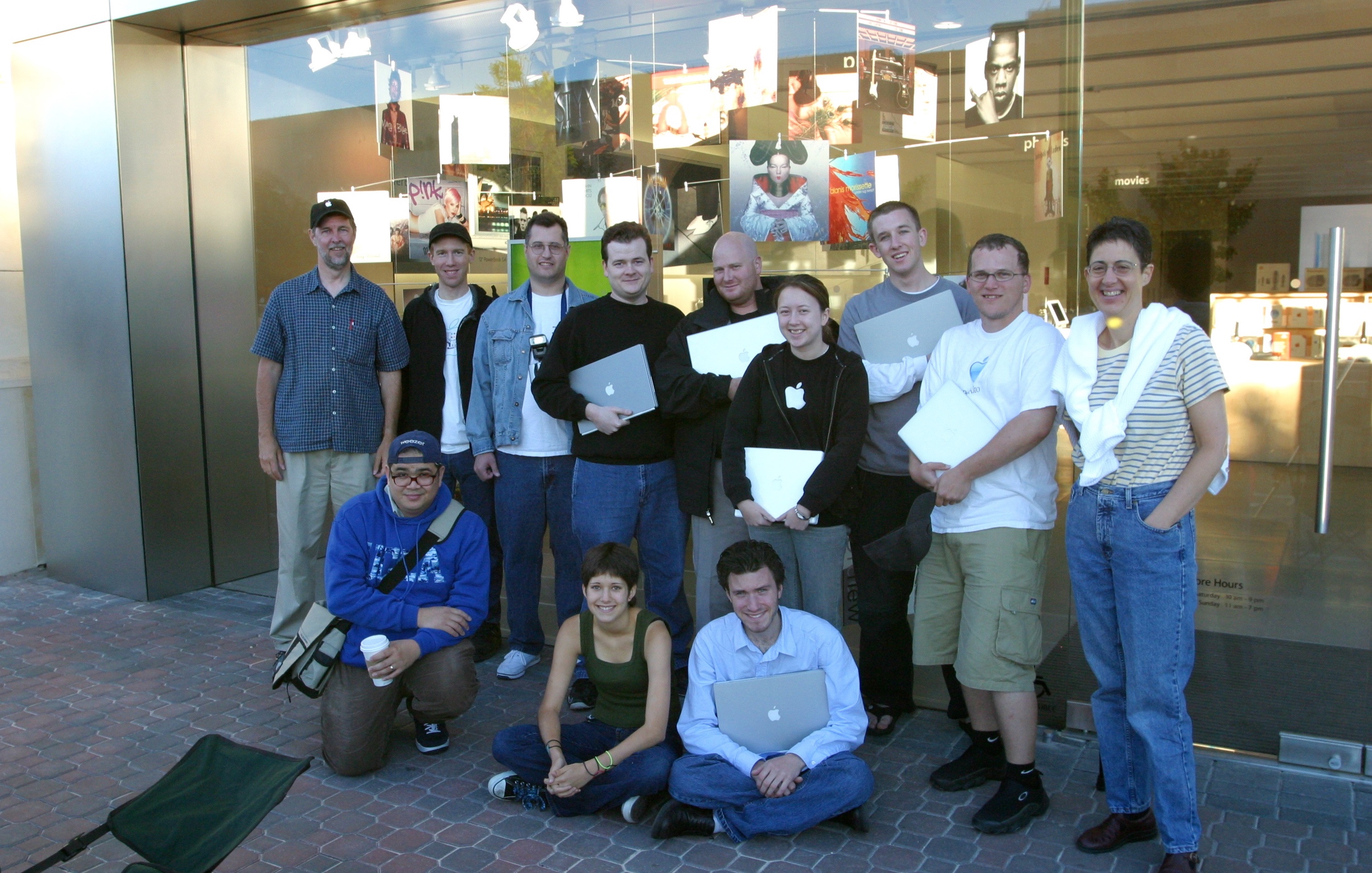 By the time Apple began construction at Broadway Plaza in early 2017, the old store was showing signs of age. With too little floorspace, an outdated layout, and fixtures predating the launch of the iPhone, a replacement was arguably overdue. The next year would be filled with anticipation as a new design slowly took shape just down the road. After 15 years of service, the original Apple Walnut Creek closed just 13 hours before its replacement opened.

Final preparations in Broadway Plaza on the evening before opening.