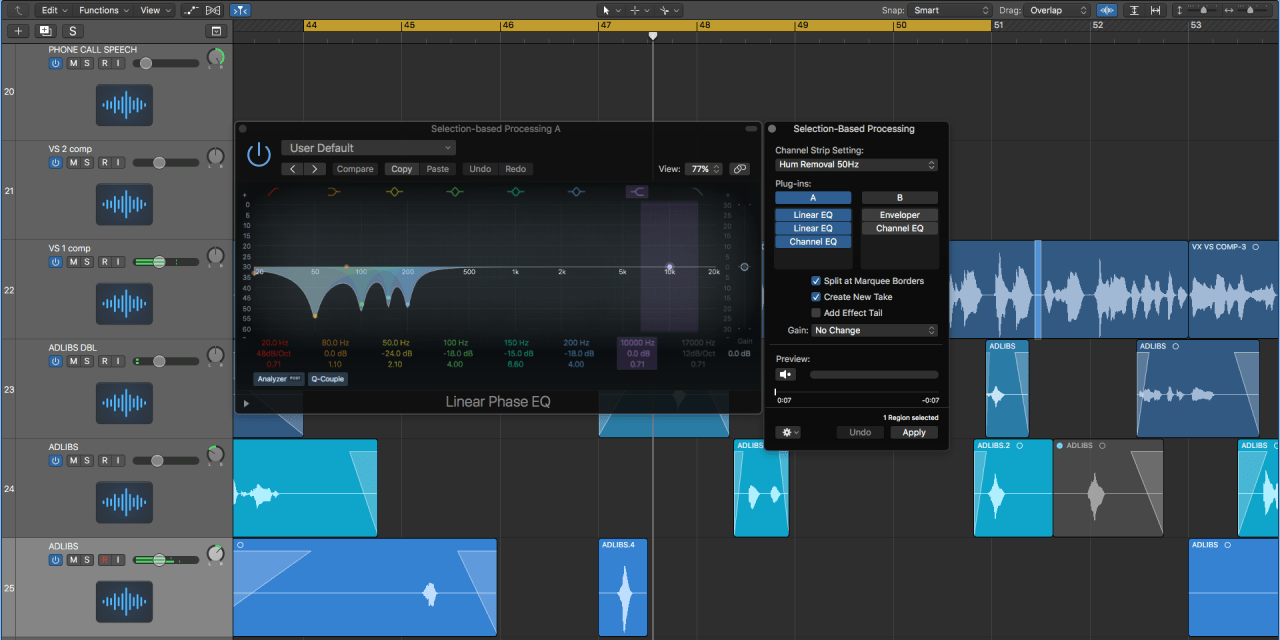 Selection-Based processing might not be the most exciting feature you’ll find inside of Logic Pro X, but it is certainly one of the unsung heroes of Apple’s flagship audio software. While much of our discussions on Logic Pros are in some degree centered around making music for various applications, Selection-Based Processing is useful for just about anyone. Whether it’s for intersting creative FX flourishes at just the right spot in a verse or making basic editing tasks a breeze for your next YouTube upload, SBP has you covered.

SBP essentially allows users to apply any of the FX available to them in Logic on a certain portion of a selected audio region in their project. For example, if you have a vocal or voice over that needs to have breaths turned down, or certain syllables that sound particularly offensive, using a combination of the Marquee Tool and SBP will allow you quickly get the job done.

Accessing the feature is quite easy, after selecting a region or a portion of an audio region to use it on, you’ll find Selection-Based Processing in the Functions menu along the top of the main Tracks area, or you can just right-click (or Control-click) on the region and select it from the Processing option in the shortcut pop-up menu.

From there you are presented with the floating Selection-based Processing window. While it looks slightly different, you’re basically getting an entire Channel Strip, just like a regular audio track, albeit only for the particular audio region or portion of the audio region you have selected. 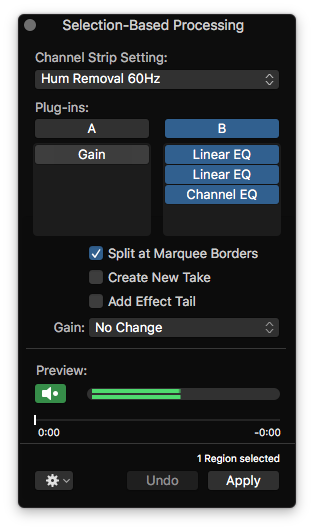 Let’s go over some of the main features on the Selection-Based processing window:

Channel Strip Setting: From here we can access Logic’s preset Channel Strips as well as our own to load up on the A or B slots.

A/B: SBP offers us two distinct Channel Strips: A or B. This way we can have two setups loaded at once and then choose which once to use for each selection.

Split at Marquee Borders: Select this option if you would like the resulting audio to be automatically dropped onto a new track. This can be quite helpful when using SBP in more creative circumstances to create interesting hits and samples.

Create a New Take: This checkbox will create a new take (or turn your audio tracks into take folder) with the audio you have applied the effects to.

Add Effect Tail: Check this box to extend the resulting audio to include any instrument release data and effects tails.

Preview: Just like it sounds, you can use this to get a quick preview of the effects you are about to apply.

Whether it be turning down breath noises or undesirable pops, harsh sibilance and other noises of that nature, Logic’s SBP has always been a go to for me. Sometimes the more automated silence removing features (ie. Remove Silence from Audio Regions) just don’t have that personal touch I’m looking for.

SBP tends to force me to treat each of these kinds of edits with a little bit more care and attention while still allowing for the flexibility of previewing my edits and the plethora of plug-ins LPX provides for each situation. Certain circumstances will require the complete removal of these kinds of noises, but others, like say a breathy vocal pass or intimate acoustic guitar performance, really benefit from the finesse SBP allows for. Even aggressive rap vocals can be left feeling slightly un-natural after entirely removing the noise and breaths in-between the words. Here’s a track I did that on as an example. 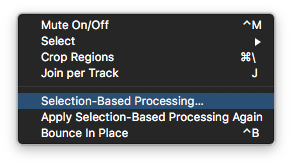 A De-Esser is great for removing ugly Sssss-sounds from vocal passes overall, and I use them all the time, but you’ll be able to really zero-in on problem areas with SBP. Sometimes that perfect take will have ugly pops and hisses that require much more aggressive surgery than your typical De-Esser will compensate for.

It can also be used in a more creative way, adding giant reverb and delay flourishes on certain words or to create extended ambient tails on hits and drum parts, for example. While I personally use SBP for more utilitarian tasks, like the aforementioned editing jobs, it can also be great for applying chains of effects to tracks at a particular part in the arrangement.

I have found these kinds of techniques to be quite helpful with SFX work or when creating short audio stingers for logos and intro animations. While just about all of these things can be done with automation in some way or other as well, sometimes the ability to create big echo tales with a quick pop-up Channel Strip can be convenient.