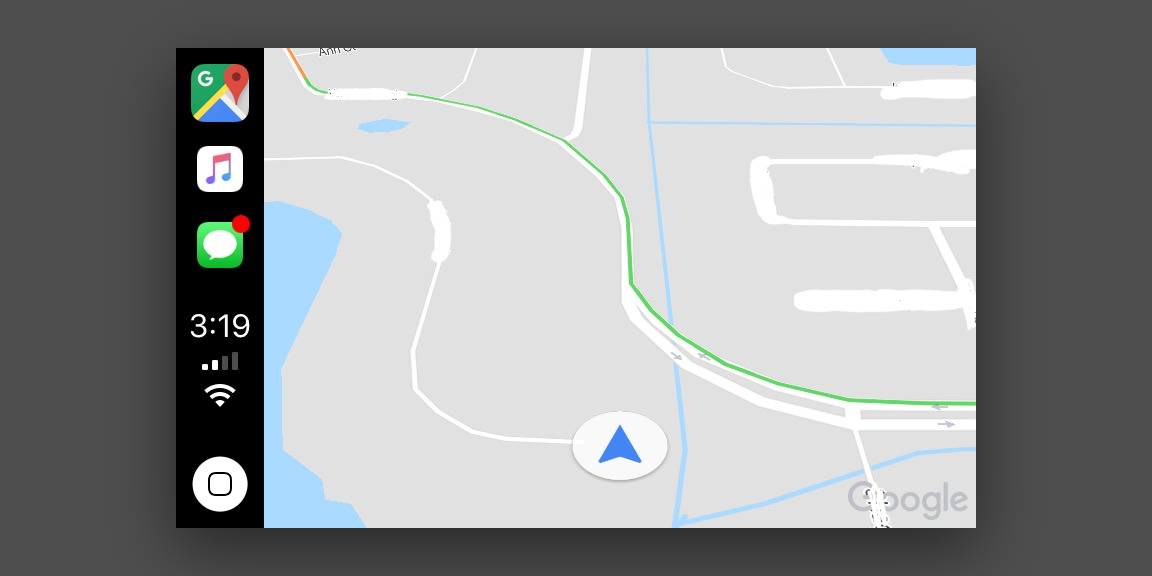 iOS 12 third-party navigation apps use a base layer that is rendered by the app, overlaid with standard CarPlay controls. You can see how that works in the screenshots below.

As shown in these screenshots, the Google Maps app icon takes the navigation slot on the sidebar, which until iOS 12 could only be occupied by the Apple Maps app.

The arrowhead and map tiles are rendered by Google, using Google branding and the visual design language. Obviously, the underlying data source is also Google’s. You can see the map in both cartography and satellite modes. There’s a D-Pad control to pan the map manually and a microphone button to conduct a voice search.

The app uses CarPlay standard toolbar controls to add destinations or access a settings screen. The settings screen is a full-screen pane that again features familiar grid layout of actions, like toggles to avoid highways and tolls. Add destination includes actions for recent searches, significant places like home and work, and POIs like gas stations.

Unfortunately, access to the Google Maps beta is relatively locked down. The roadmap for the public launch of these features is yet to be announced. Users will need to upgrade their devices to iOS 12, which supports all the same devices that can run iOS 11. Then, we must wait for the third-party maps apps to release updates to the App Store which integrate with the new CarPlay APIs.

Given Apple featured Google Maps on the WWDC keynote slide, we would expect it to come out fairly soon — although it’s unlikely to be there on day one.