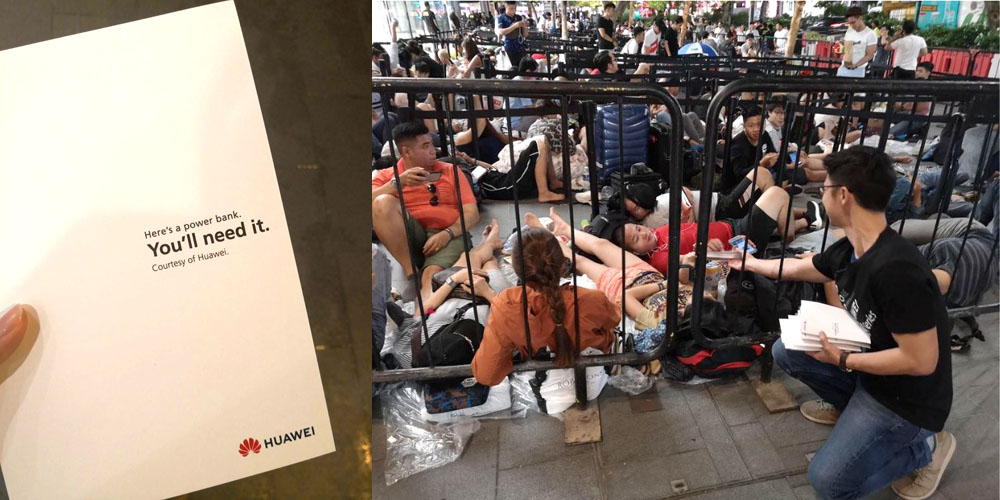 Those waiting in line for new iPhones are one of Apple’s most visible forms of free marketing – so it’s perhaps not surprising that competitors sometimes try to hijack the event. Samsung picked a particularly dumb way to do it back in 2015, but Huawei has been a little smarter …

Rather than try to sell phones to dedicated Apple fans, CNET reports that Huawei instead handed out free power banks. Ok, the packaging of course took a dig at Apple, suggesting that the battery life wasn’t up to scratch.

Here’s a power bank. You’ll need it. Courtesy of Huawei.

The company handed out some 200 of the 10,000mAh power banks to customers waiting in line at the Singapore Apple Store.

The stunt was to draw attention to the battery life of the company’s P20 smartphone. Our sister site, 9to5Google, did cite that as a key feature when reviewing the phone.

As usual with Huawei, there’s a huge battery in the P20 Pro. The 4,000 mAh power pack easily lasts me a full day of use every single day. I tested the P20 Pro as my daily driver for well over a month and during that time I never once found myself seeing the phone die before going to bed. In fact, the lowest it ever got was about 10%. On average I was able to easily hit 4-6 hours of screen time as well.

Sure, it’s a bit of a cheap dig, but if you’re queuing up overnight for a phone, some extra juice for your existing one is going to be pretty welcome, so as marketing stunts go, it’s not a bad one.