AAPL caught up in tech stocks slide, losing 4.6% in value in one day 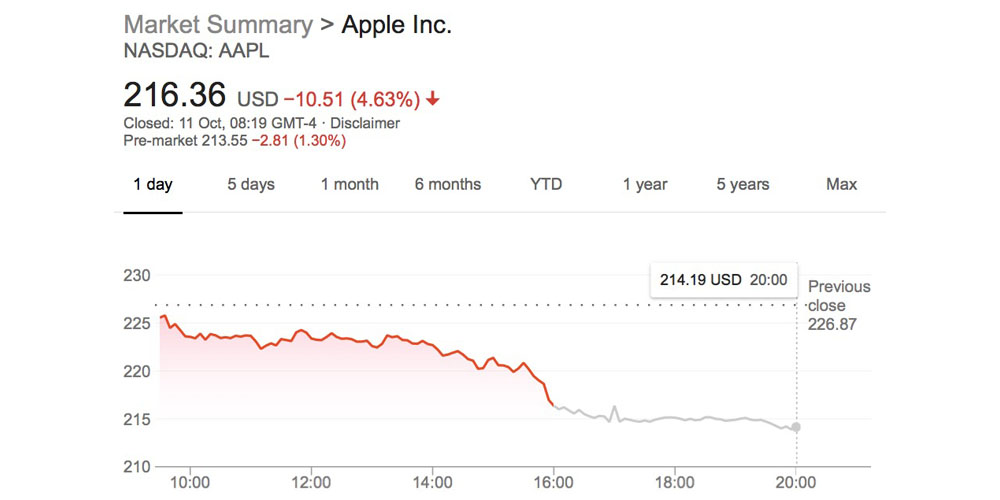 AAPL saw its stock price slide by 4.6% in one day as tech stocks were hit by one of the steepest declines since the financial crisis …

The WSJ reports that two other tech stocks were hit even harder.

The Dow industrials extended their steepest October retreat since the financial crisis Wednesday, posting an 832-point decline that raises fresh concern about the health of the nine-year-old bull market for stocks.

The selling was led by the technology shares that have fueled much of the 2018 advance in U.S. stocks, with Netflix dropping 8.4%, Amazon declining 6.2% and Apple off 4.6%. Combined the three companies shed nearly $120 billion in market value on Wednesday.

Though the rout started with tech companies, they weren’t the only ones affected.

Selling accelerated toward the end of the day and losses spread well beyond tech stocks; bank stocks were pummeled along with companies exposed to global trade such as Caterpillar Inc.

Investors turned to shares deemed likely to do better in tougher economic times, such as utilities companies.

The decline has been attributed to a mix of factors.

First, a rise in government bond yields matched by the Federal Reserve’s interest rate increases has offered a good option for those investors seeking to reduce their risk exposure.

Second, the WSJ notes signs in housing and autos that economic growth may be slowing.

But perhaps the largest factor for tech stocks is concern about the Trump administration’s trade war with China.

A shared concern is that trade tensions between the U.S. and China appear to be worsening and that a slowdown in the Chinese economy could spill over into global markets.

Chinese authorities have stepped up their efforts to keep money flowing in the world’s second-largest economy amid concerns about the ramifications of a years-long increase in Chinese debt issuance.

The result: A simultaneous selling of 2018’s biggest stock-market winners in the U.S.

It has been suggested that iPhone XS sales have been disappointing in China, and the spy chip claims won’t exactly be helping relationships between China and the US.