Which MacBook should you buy? Here’s how the Retina MacBook Air compares to the rest of the lineup 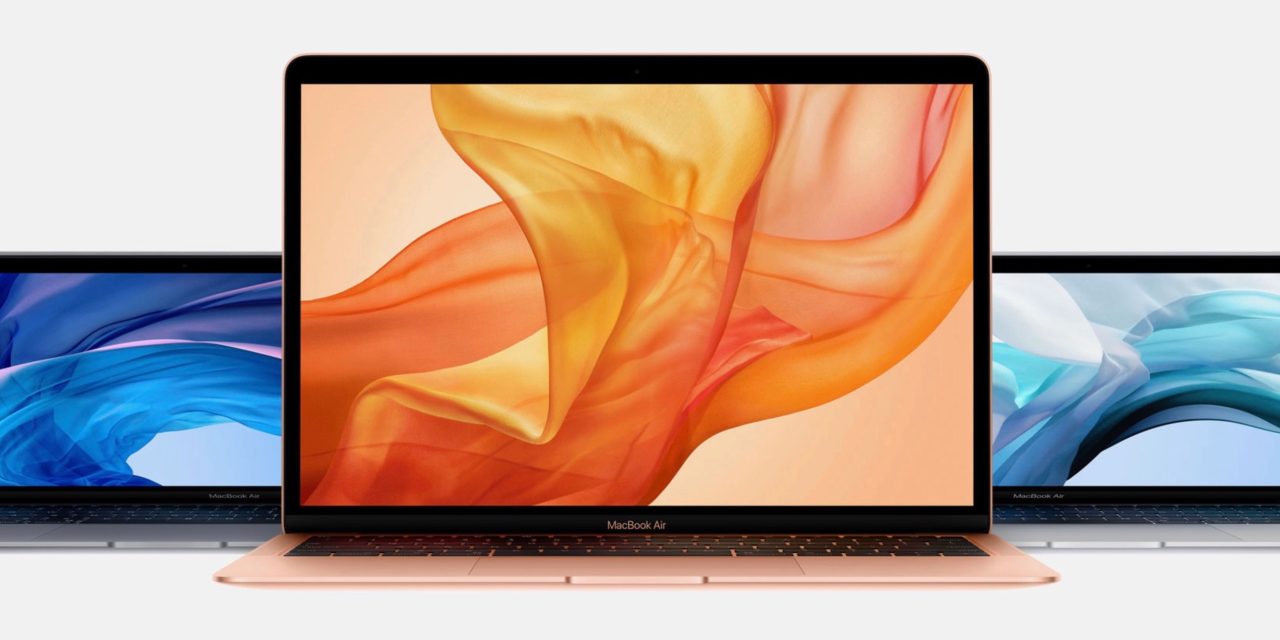 After years since a major update, the new Retina MacBook Air was unveiled yesterday sporting a major design refresh, updated processor, Touch ID, USB-C and much more. Let’s take a look at how the Retina MacBook Air compares to the rest of the MacBook lineup and which one you should buy.

Before Apple’s October event yesterday, there was a lot of speculation about what the release of a 13-inch Retina MacBook would mean for the rest of the lineup. Some thought Apple might kill off the 12-inch MacBook. Or alternately, maybe Apple would end the MacBook Air line and offer 12- and 13-inch Retina MacBooks.

The lineup also includes the 13-inch MacBook Pro without Touch Bar starting at $1,299. Let’s dive into how the new 13-inch Retina MacBook Air compares to all these machines with its starting price of $1,099 (originally $1,199). 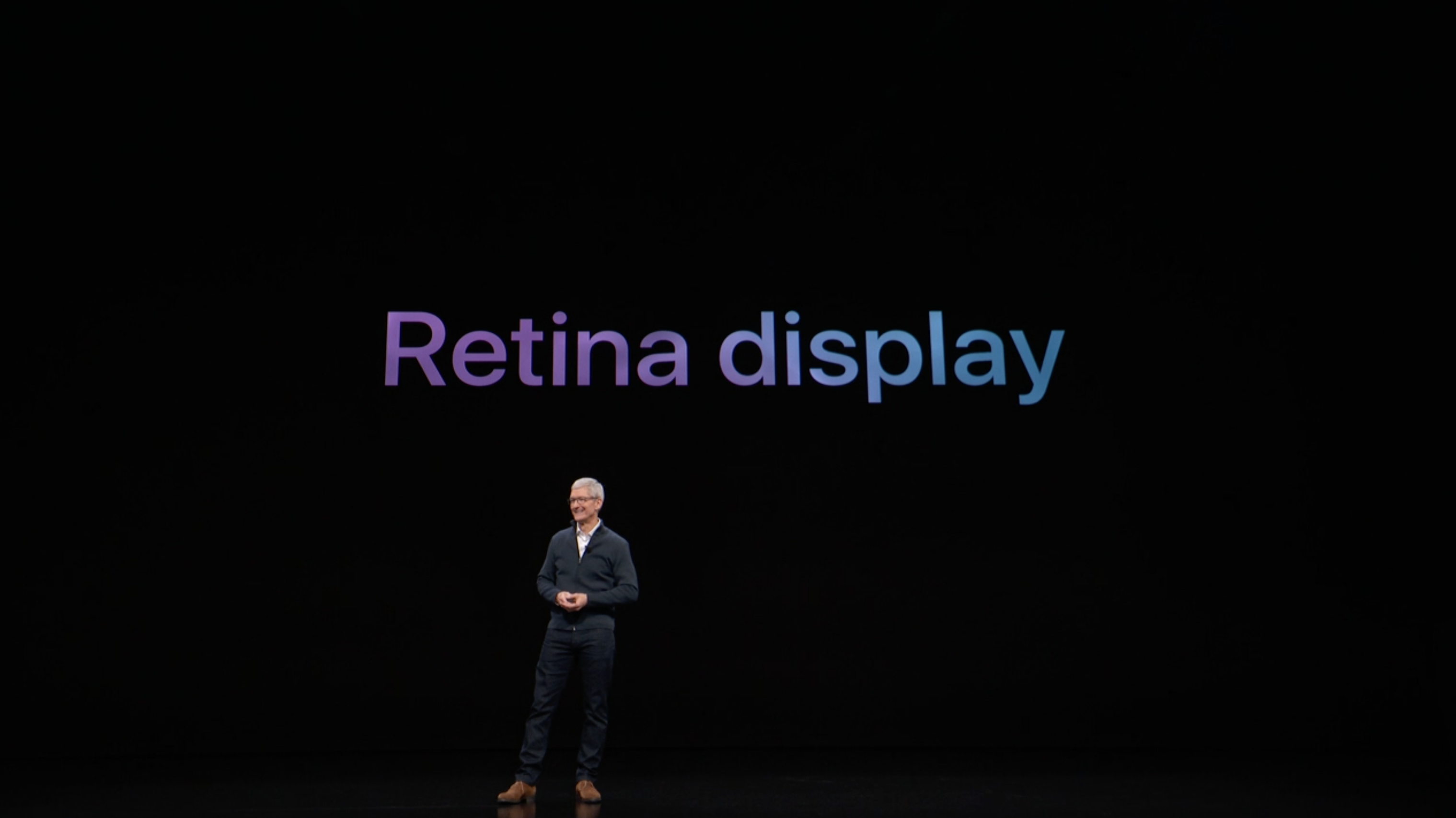 Arguably, the biggest upgrade arriving with the new MacBook Air is the Retina display. Along with the new resolution, Apple also replaced the outdated, bulky silver bezels with thinner black bezels, matching the MacBook and MacBook Pro.

Here’s how the display specs compare across the MacBook lineup:

As you can see, the Retina MacBook Air delivers an impressive display upgrade, but you do miss out on high-end features like Apple’s True Tone tech and the P3 wide color gamut.

But most people who pick up the new Retina MacBook, especially if coming from a non-Retina display, will be very happy with this screen.

The Retina MacBook Air scores a few wins when compared to the 12-inch MacBook when looking at I/O. The new 13-inch MacBook Air includes two Thunderbolt 3/USB-C ports. Users will be able to take advantage of better USB-C/Thunderbolt 3 hubs like the ones the MacBook Pro line can use that utilize both ports, versus the single USB-C port adapters that MacBooks are limited to. Most single port hubs/adapters limit functionality to USB support, while some higher-end models will provide full TB3 support.

Also, the 12-inch MacBook’s single port is USB-C (USB 3.1 Gen 1) only, and maxes out at a throughput of 5Gbps. Meanwhile, the new Retina MacBook Air with Thunderbolt 3/USB-C can achieve speeds up to 40Gbps and includes USB 3.1 Gen 2 which provides speeds up to 10 Gbps for non-TB3 peripherals. 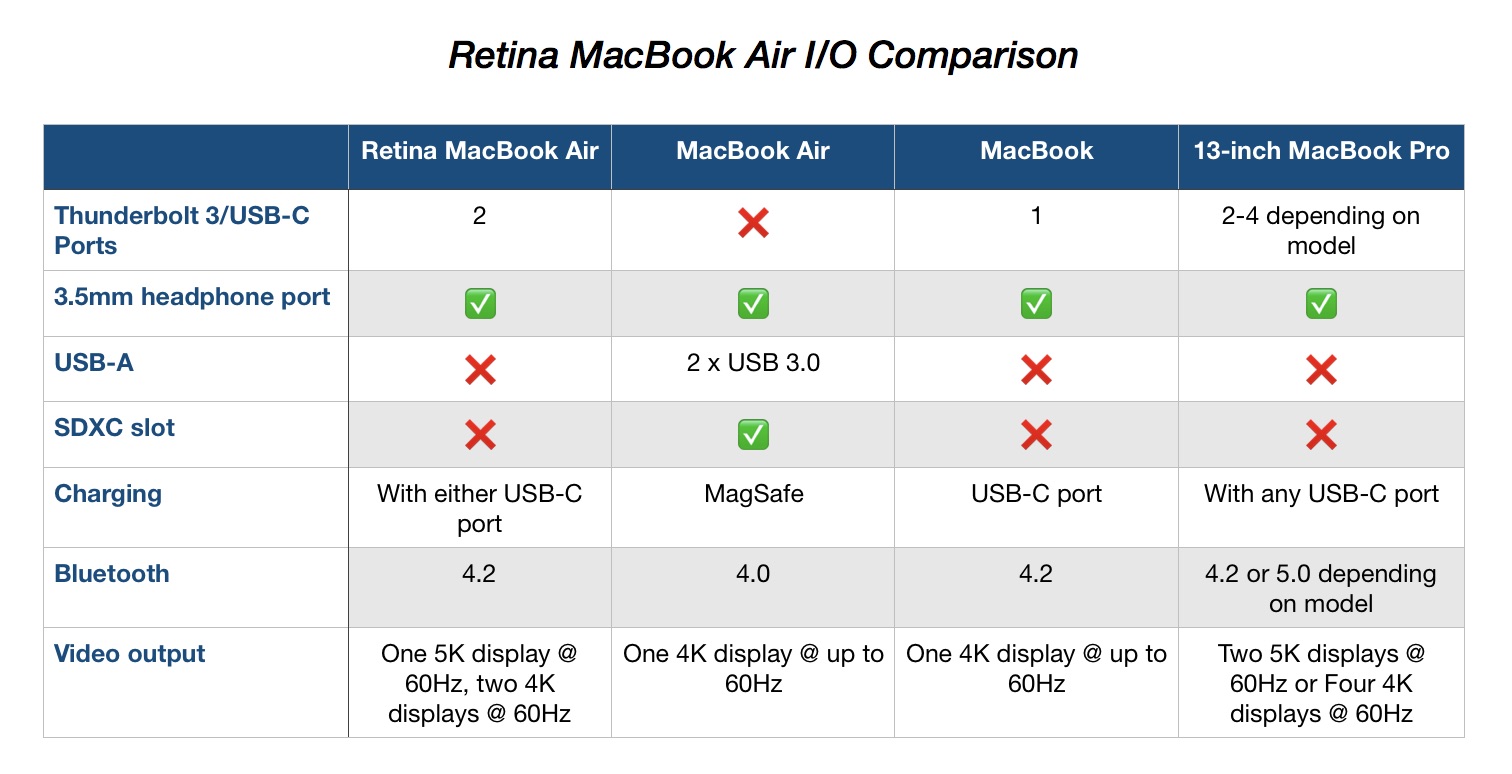 The Retina MacBook Air also excels with video output compared to the previous MacBook Air and MacBook, supporting up to two 4K displays at 60Hz.

When it comes to hardware specs, the Retina MacBook Air offers solid options. 16GB of RAM is now a configuration option along with a 1.5TB SSD. There’s also a new integrated graphics card and another feature that sets the new MacBook Air apart is Touch ID.

While the base 1.6GHz processor doesn’t sound as fast as the 1.8GHz in the old MacBook Air, it will be more efficient and powerful being an 8th gen chip even though the clock speed is a touch slower. Apple hasn’t shared a benchmark yet on how the two chips stack up. 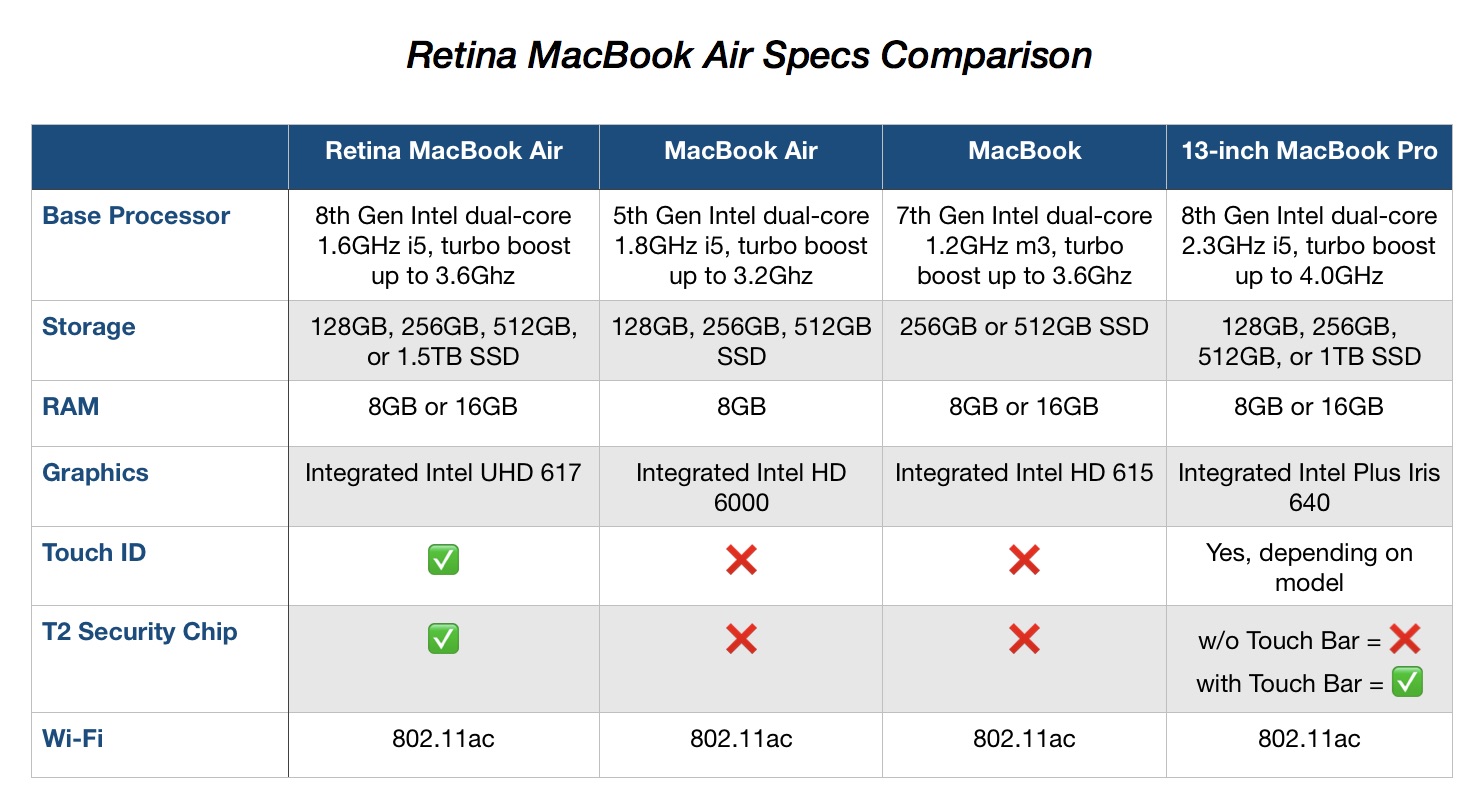 If you’re coming from an older MacBook Air or MacBook Pro, one consideration will be the new  3rd gen butterfly keyboard. It has a distinctly different feel and experience than the keyboards found on Apple’s older notebooks, specifically a shorter key travel and more clicky feel.

For what it’s worth, Apple says its latest butterfly keyboard is four times more stable than a keyboard with a scissor mechanism. If you haven’t tried one out before, make sure to drop by an Apple store or ask a friend who has one and give it a shot. 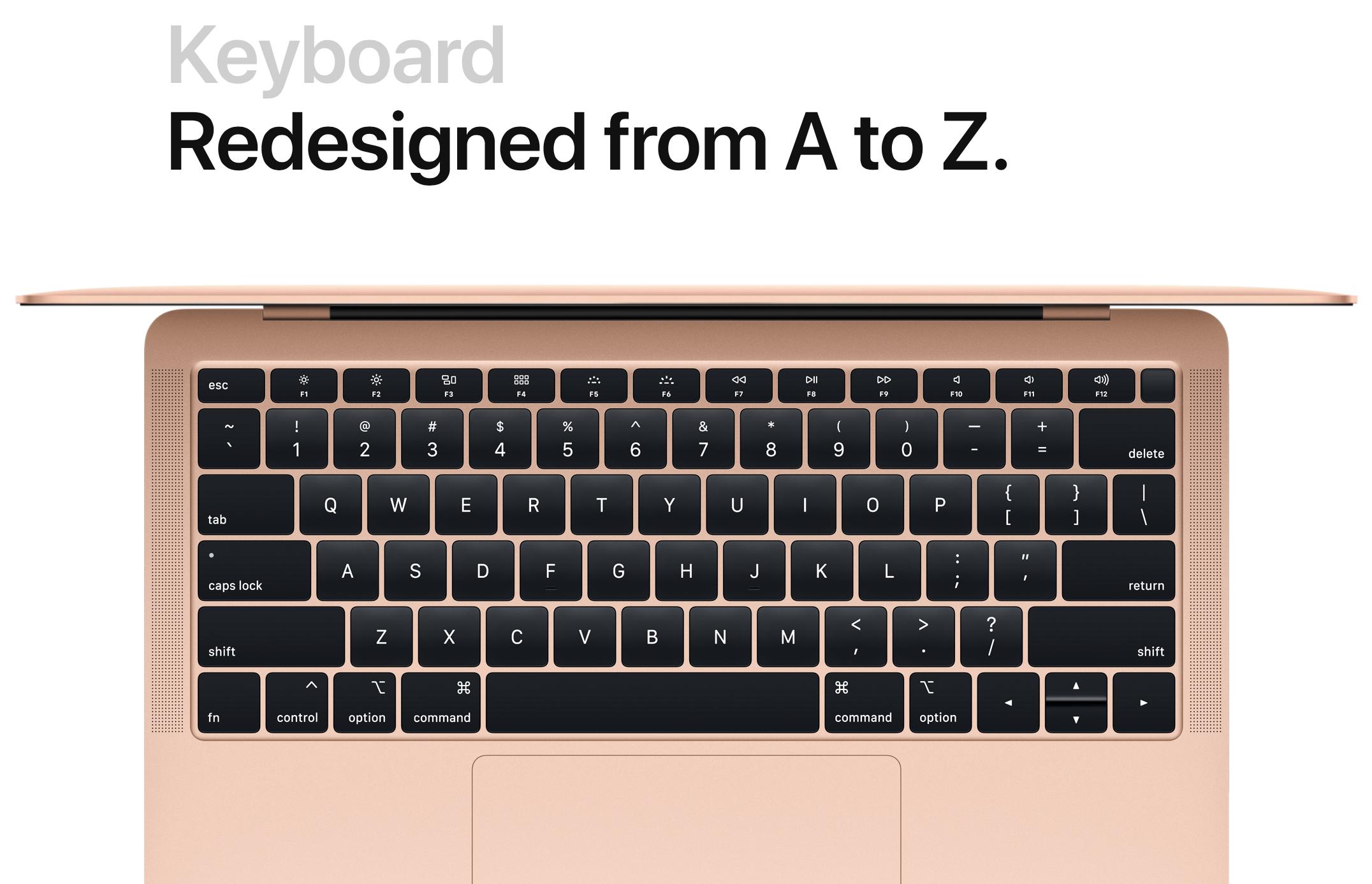 The Retina MacBook Air also gains the Force Touch Trackpad found on the MacBook Pro and MacBook. This also means a 20% larger surface area than the previous generation. Here’s how Apple describes the Force Touch trackpad.

You have precise control and a uniform response — no matter where you click the trackpad — as well as plenty of room for Multi-Touch gestures like pinch and zoom. Your fingers will feel right at home.

The Retina MacBook is also slimmer and more lightweight than its predecessor, however it’s not as light as the MacBook. Here’s how the details stack up:

The Retina MacBook Air features 17% less volume and is about a quarter pound lighter than the previous MacBook Air. The 50% slimmer bezels help to make the footprint of the notebook noticeably smaller while retaining the same 13.3-inch screen.

While the thinnest side of the new MacBook Air is a tiny bit thicker than the old MacBook Air, the thicker side is thinner than that of the old one by .07 inches.

The Retina MacBook Air beats out its predecessor with 13 hours of battery when it comes to iTunes movie playback and matches it for wireless web browsing at 12 hours of use.

It also lasts longer than both the MacBook and MacBook Pro which offer 10 hours of wireless web browsing, and 12 and 10 hours, respectively for iTunes movie playback. 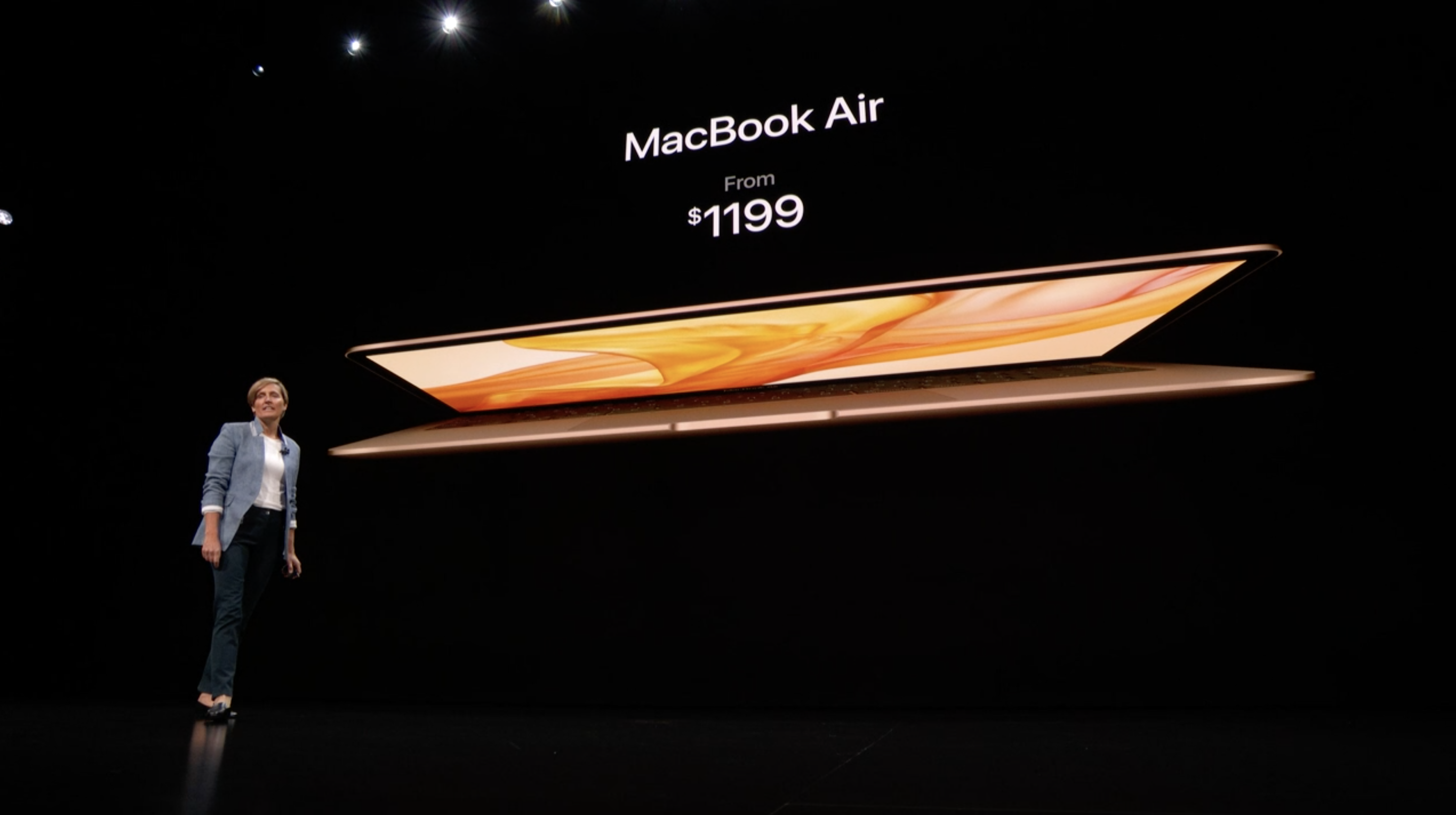 Other fun tidbits about this new notebook include it being the first Mac made from 100% recycled aluminum, a 720p HD FaceTime Camera, improved speakers with 25% more volume and two times louder bass.

Unless having the absolutely lightest and smallest MacBook are the two most important deciding factors, the new Retina MacBook Air should prove to be an excellent choice for most users. It’s also a great choice for the majority of users who don’t need pro level performance.

With the new display, two Thunderbolt 3/USB-C ports, Touch ID, new design and upgraded RAM and storage options, it’s a compelling machine at a starting price of $1,099 (originally $1,199). One of the only downsides is that it still starts with just 128GB of storage for the base model.

Check out the first unboxings of the new Mac here, and keep an eye on 9to5Mac for our hands-on coverage of the Retina MacBook Air soon!