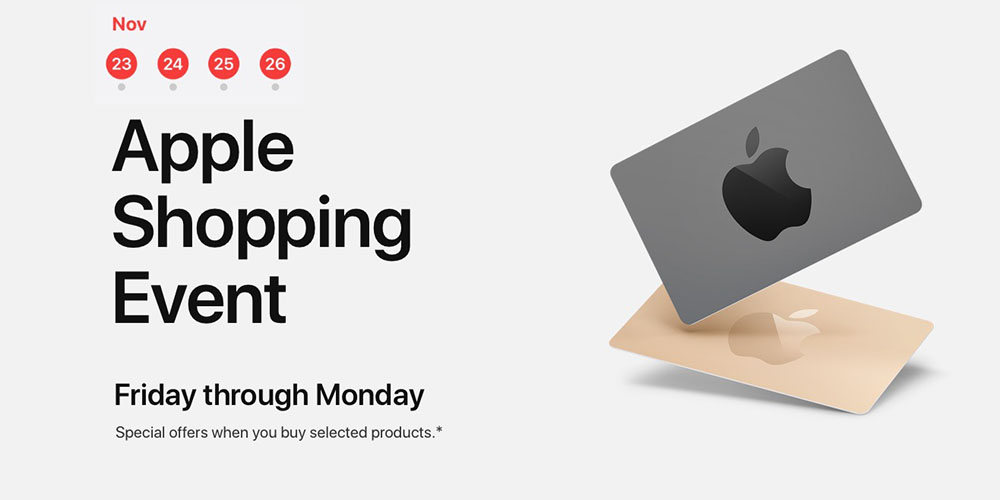 Update: The Apple Store Black Friday Event is now live in the USA, with the expected US dollar card values.

In time for Black Friday, Apple has announced a four-day ‘shopping event.’ So far, it has gone live in Australia, where it is already Friday. This offers gift cards ranging in value from A$35 ($25) to A$280 ($200) when you purchase a wide range of products – but don’t expect any deals on the latest models. In fact, for the best Apple Black Friday deals, you should be going to 9to5Toys instead.

Check out the 9to5Toys deals hub for the best Black Friday promotions spanning all retailers, which will easily beat Apple’s first-hand sales with real discounts and savings on the latest iPhones, Macs, iPads and more.

Here are the gift cards on offer, expressed in rounded US dollar equivalents:

We’ll update with the official US values if they differ when it goes live here.

However, the deals are limited to older models. For iPhone, it’s iPhone 7/Plus and 8/Plus. For iPad, 9.7-inch, 10.5-inch and iPad mini 4. For Mac, you can get a MacBook Pro with Touch Bar, but the MacBook Air deal appears to be limited to the older model.

The deal does apply to a wide range of iMacs, including 5K models and the iMac Pro. It also includes the Mac Pro, though that of course wouldn’t be a great purchase with an all-new modular version arriving next year. The Mac mini is not included.

For the Watch, only the Series 3 are included, with six models:

Bookmark our Black Friday Deal Hub for updates as offers are announced. Some deals are already available in Amazon’s official Apple storefront.