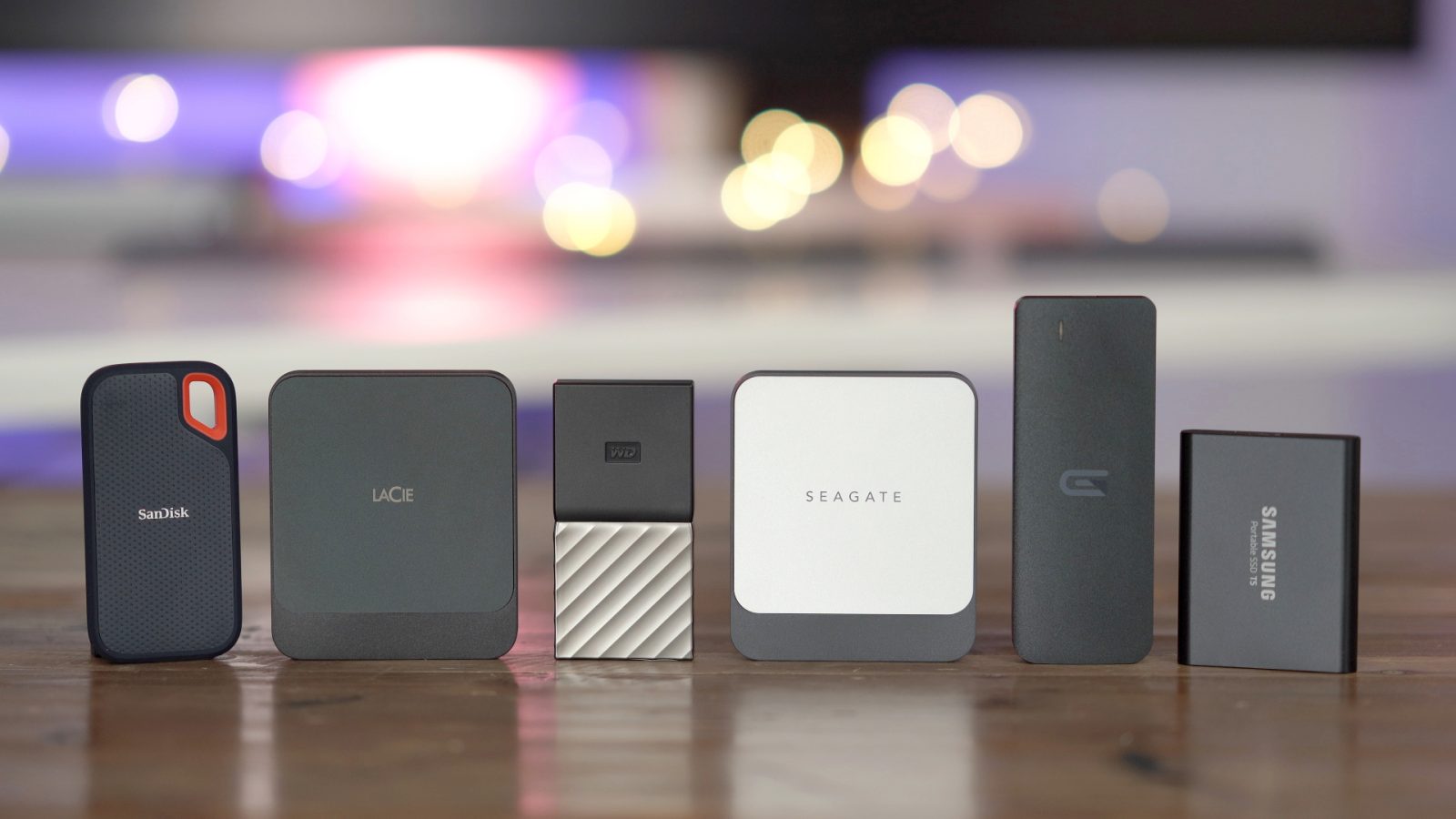 The base $1199 model of the 2018 MacBook Air is a solid entry-level laptop barring one exception — its paltry 128GB PCIe-based SSD. The good news is that there is an ever-growing list of external SSD options that work great with modern Macs. In this hands-on video walkthrough, we take a look at some of the best MacBook Air SSDs.

Although the 2018 MacBook Air supports Thunderbolt 3, in this post, we’re specifically focusing on USB 3.1 SSDs. The reason for this decision is that the Thunderbolt 3 ports are fully compatible with much less expensive USB devices and cables. USB 3.1 SSDs are less expensive than faster Thunderbolt 3 SSDs, such as the Samsung X5 (review). For those with the budget for a Thunderbolt 3-enabled SSD, we’ll be back with a follow-up post to consider the best choices in that realm.

To be included in this list, each drive must have at least 1TB of storage, connect directly to a Mac via a single USB-C cable, support USB 3.1 gen 2, and be completely bus-powered and truly portable. I amassed a list of five portable MacBook Air SSDs, or six if you include the Lacie and Seagate SSDs, which are the same exterior of colors and branding.

All of the SSDs feature a 3-year limited warranty, while some, like the Seagate and Lacie-branded drives, offer special perks like a free limited-time Adobe Creative Cloud subscription.

All of the drives tested are SATA III drives and thus feature similar read/write performance. Combined, the drives averaged QuickBench sequential read speeds of 529MB/s and write speeds of 491MB/s. The best performer, the Glyph Atom, was only better than the worst performing drive by 21MB/s read and 13MB/s write. In other words, all of these drives will provide performance within the ballpark of one another, and all of these MacBook Air SSDs are suitable for 4K workflows.

Because the drives feature such similar performance, you should probably judge these drives based on other factors, such as build quality, portability, and price.

From a pure build quality perspective, the Glyph Atom SSD is easily the top drive on this list for MacBook Air. The outer shell of Glyph’s drive is composed entirely of dense, durable anodized aluminum, and a rugged protective sleeve is also included. 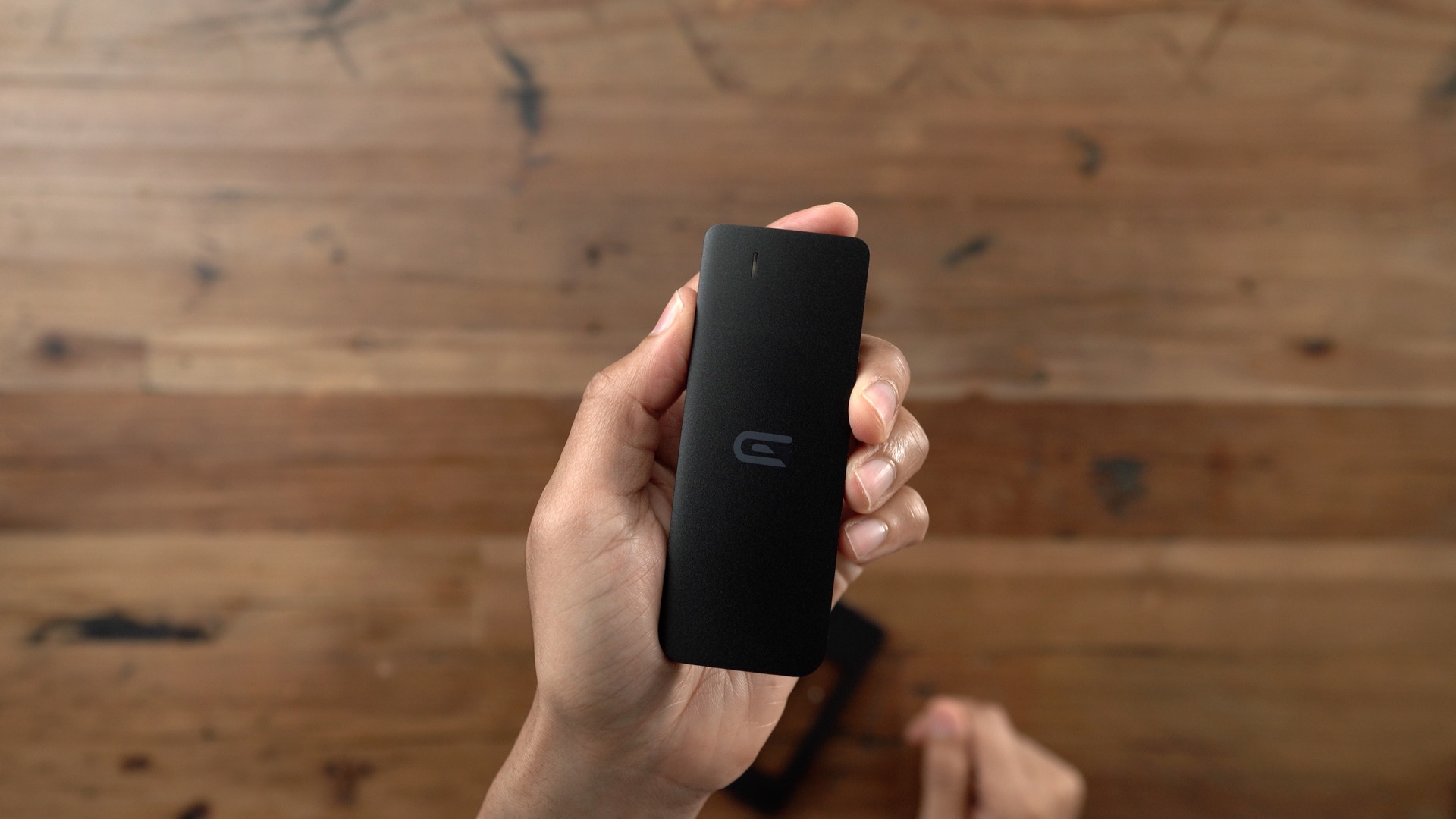 Next on the list is the Samsung T5, which also features an outer shell made out of aluminum, although the exterior isn’t nearly as dense as the Glyph Atom. 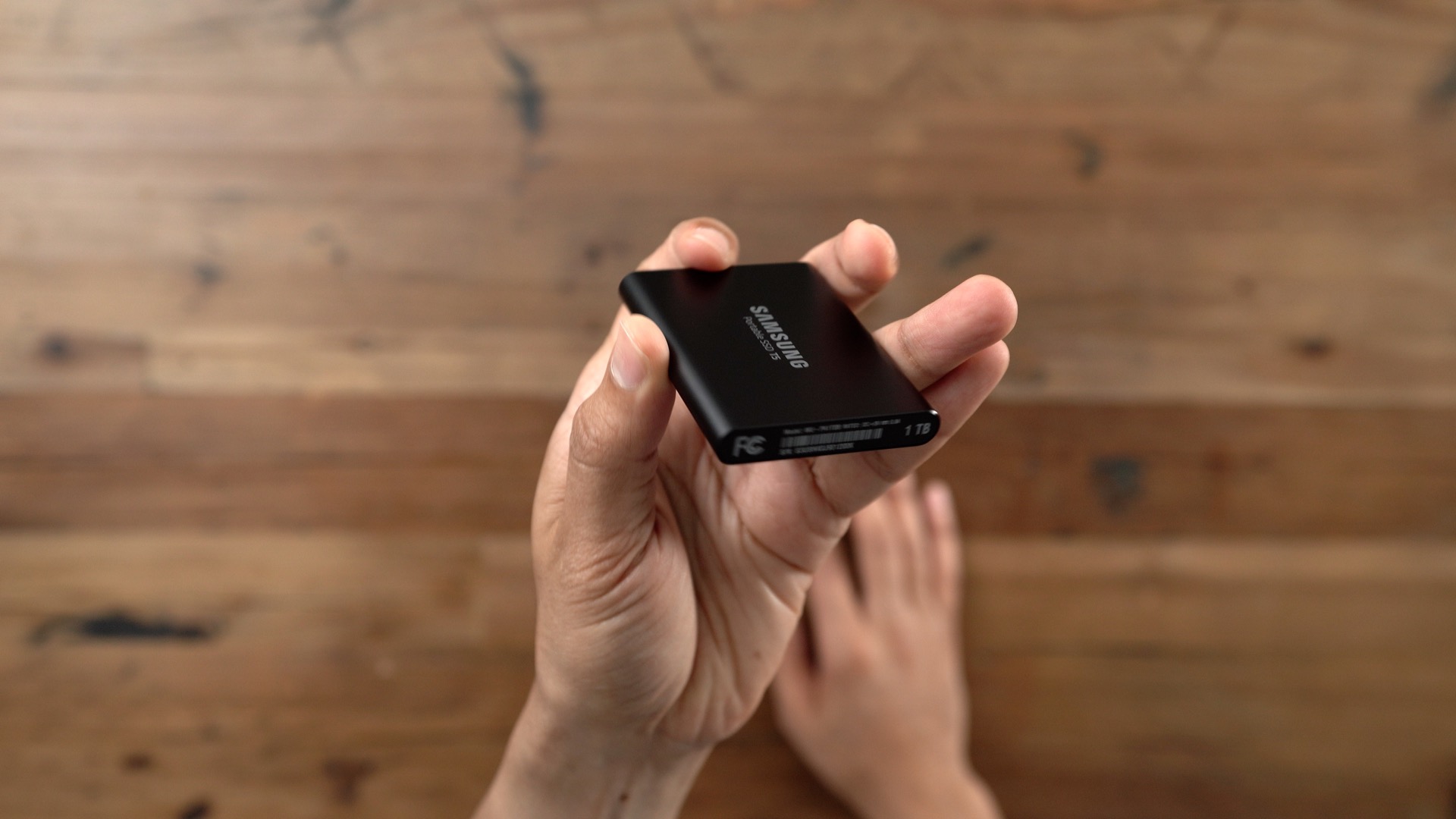 The Seagate Fast SSD and Lacie Portable SSDs are both made mostly of plastic, but they feature an aluminum top plate, and use dense, high quality plastic that should hold up well through normal usage. 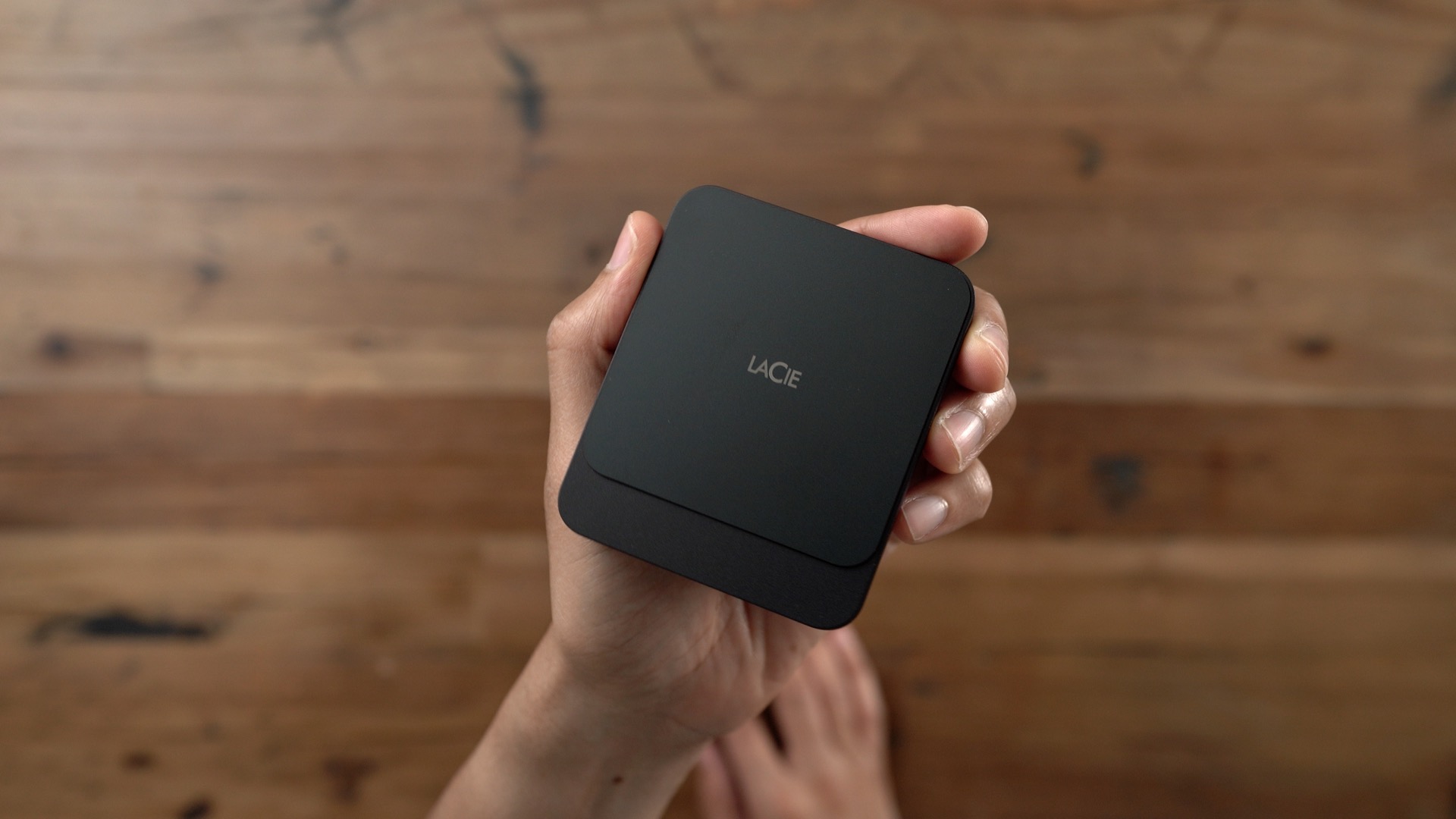 Western Digital’s My Passport SSD is also made out of plastic, although it features a two-tone design with a metal-like finish. Its material is light weight and airy, and it isn’t as sturdy feeling as the previously mentioned drives. 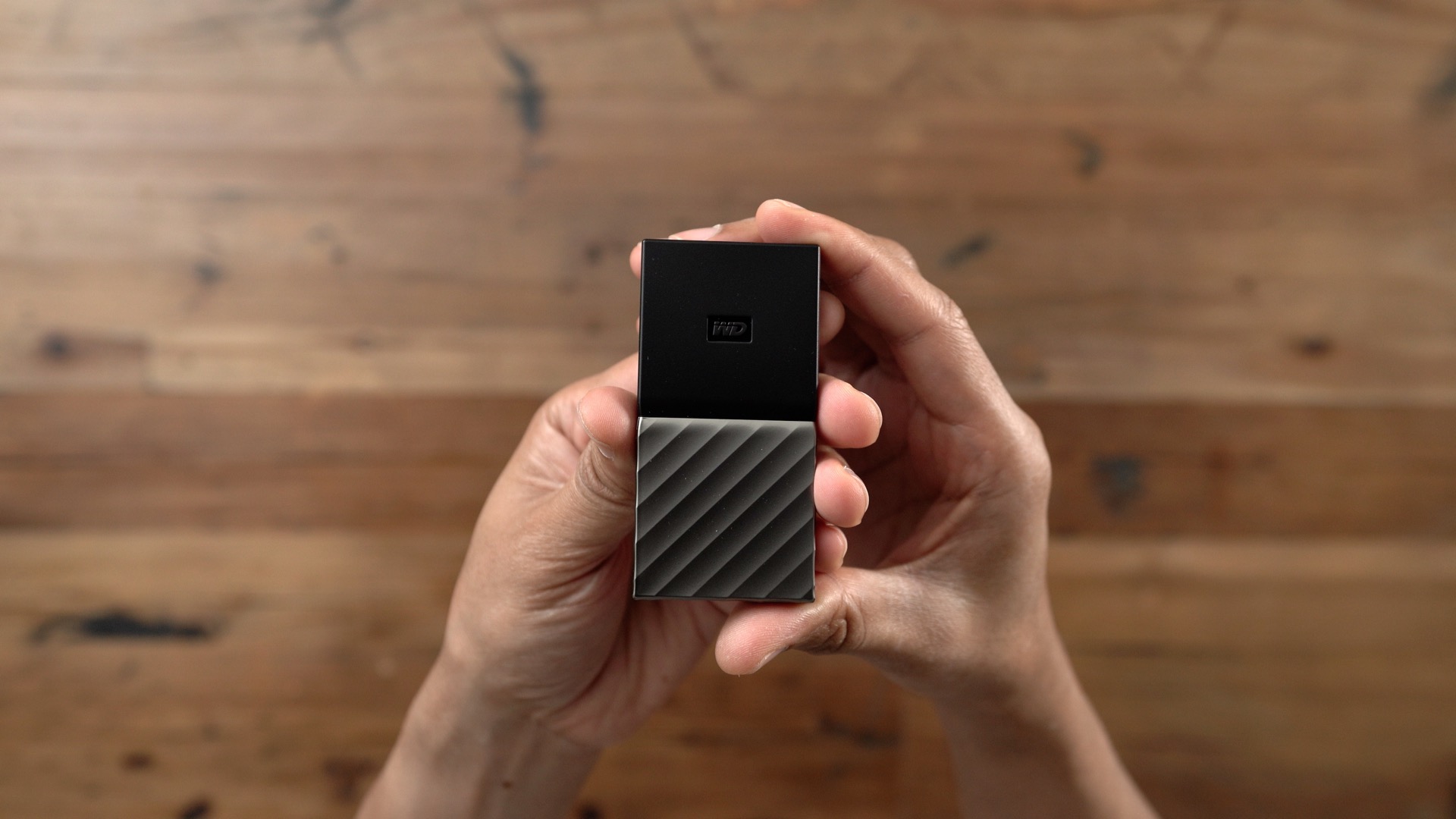 Last on this list is the SanDisk Extreme Portable SSD, which comes from parent company Western Digital, the maker of the WD My Passport. I’m quite fond of this drive for how light and portable it is, but the outer shell is made entirely out of plastic and rubber, and it doesn’t seem as durable as the Western Digital-branded or Seagate drives. 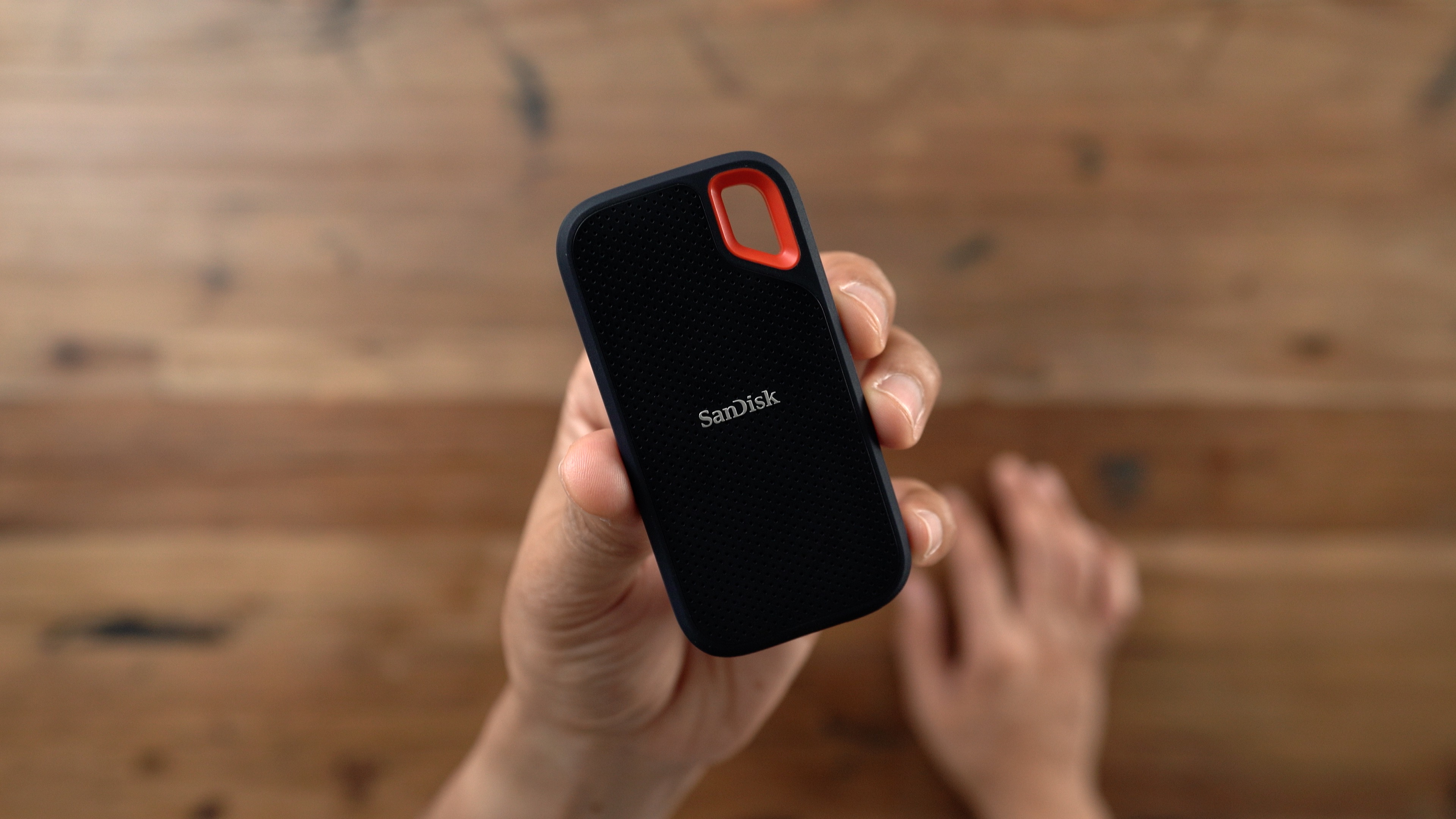 That said, while all of the MacBook Air SSDs feature a measure of shock resistance to help in the case of drops, this is the only drive to feature an IP55 water and dust rating clearly advertised on its product packaging. Despite its build materials, it might be the best drive on this list for use in areas where it might be subjected to water and dust.

LED status/activity lights can be extremely annoying, especially when using a drive in a dark setting. Four of the drives on this list feature LED status lights, while two of them — the WD My Passport and SanDisk Extreme Portable SSD — omit the lights entirely. 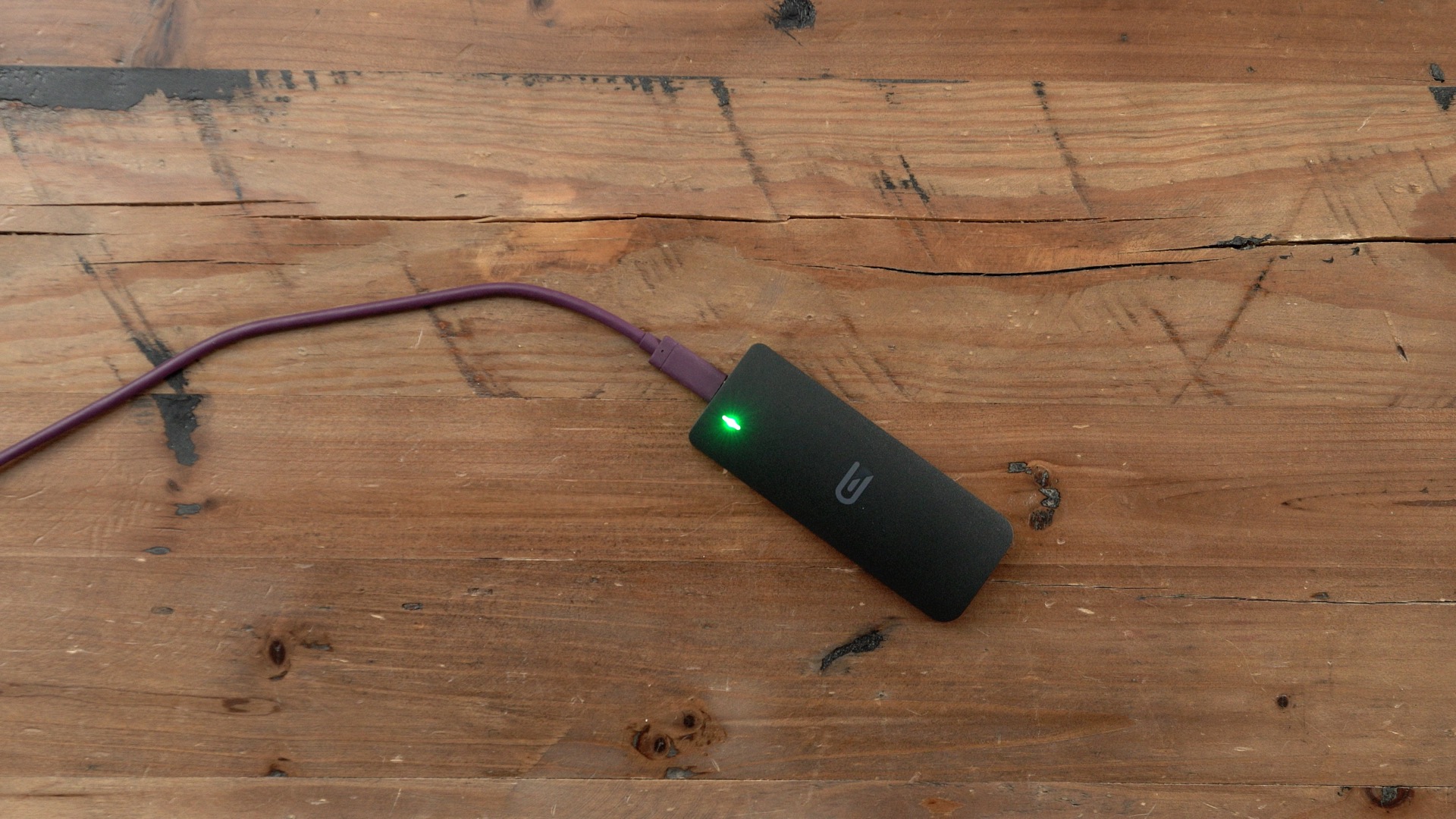 Of the drives that feature status lights, the Glyph Atom SSD’s bright green light is the most annoying, followed by the Seagate and Lacie drives, which both feature bright white lights. 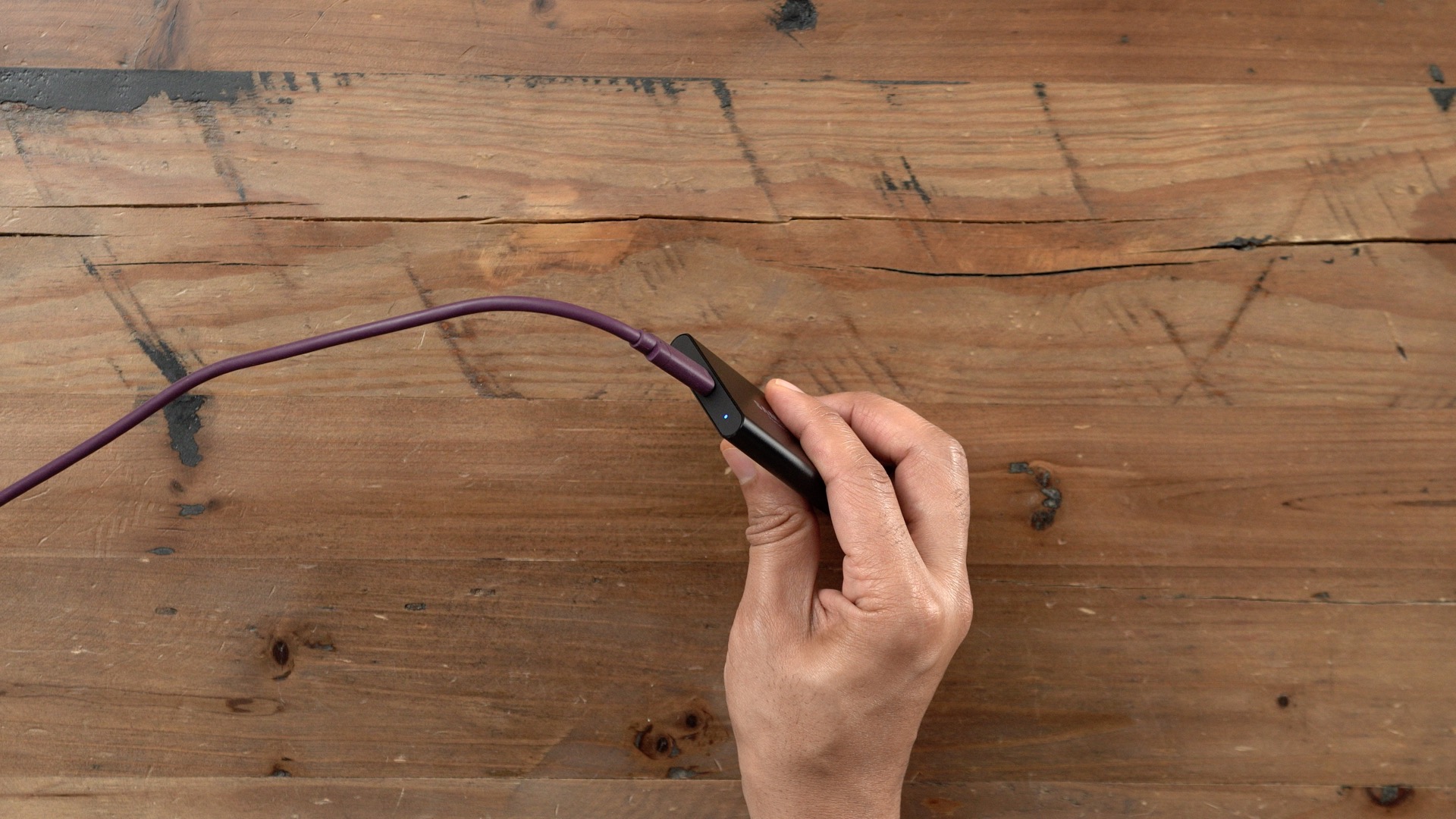 I prefer that my drives not have any status lights at all, but if you’re going to have them, Samsung does it right. The Samsung T5 comes with a blue LED status light, but it’s hidden behind the end cap, and not nearly as bright as the others.

All of the drives on this list are small enough to be portable, and all of them are bus-powered, meaning they require nothing more than a USB cable to attach to your MacBook Air. But if I had to choose just one drive for its portability, I’d pick the Samsung T5. 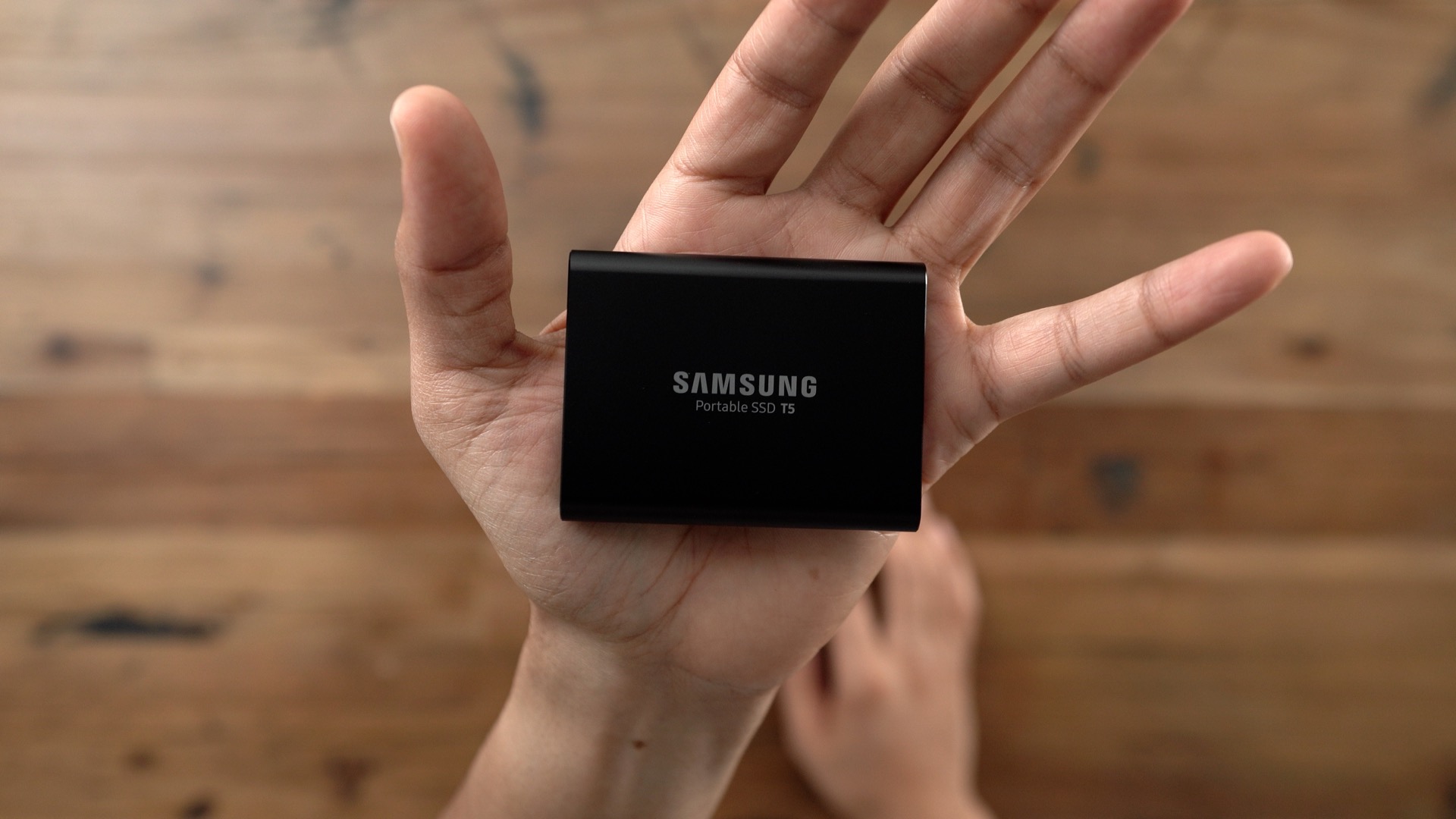 The Samsung T5 is super-portable

The T5 is the shortest drive, and it’s just a little bit wider than the candy bar-style SSD designs found on this list. Samsung’s SSD easily fits in the palm of your hand, and can be slipped into your pocket. 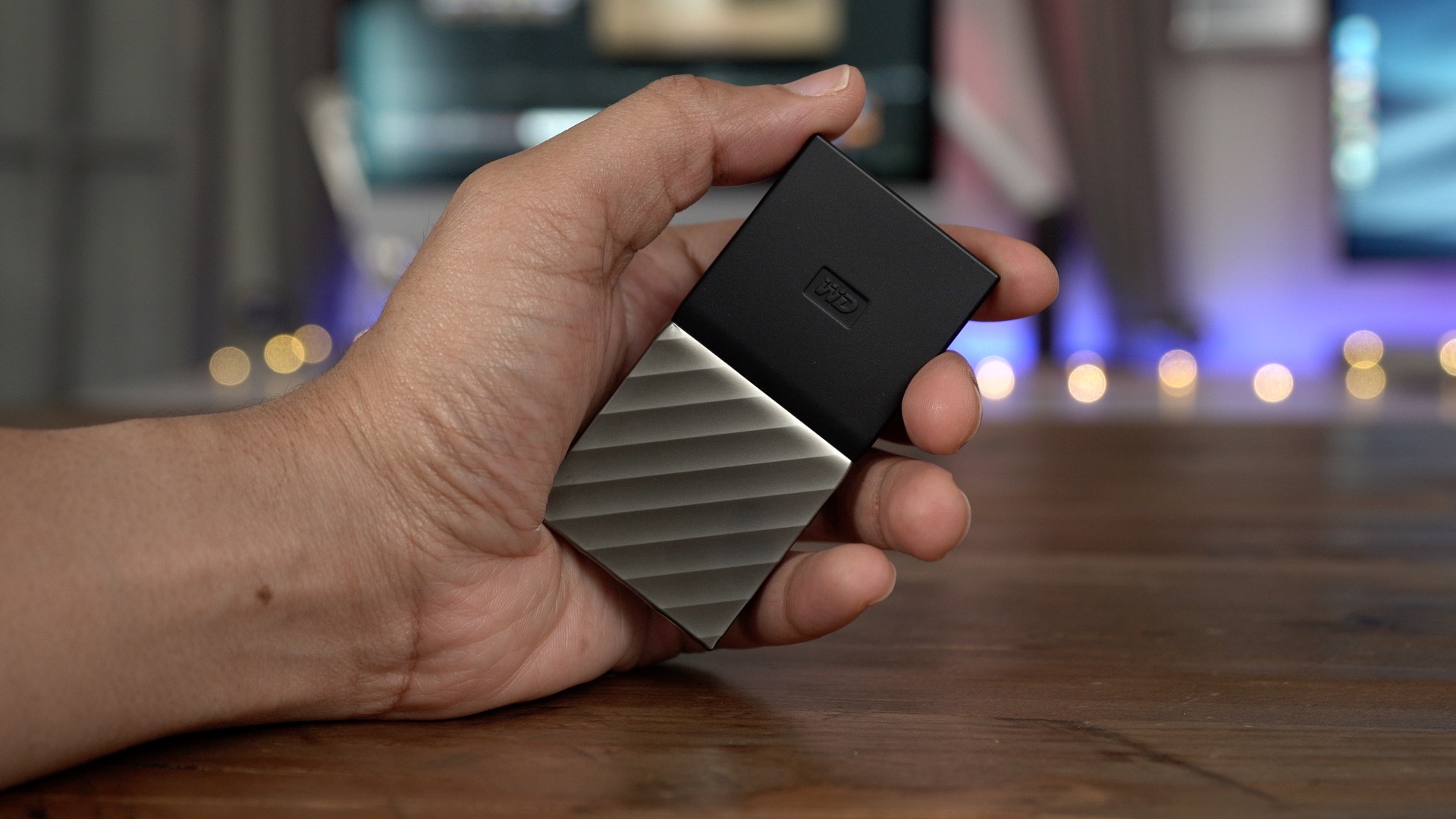 The Western Digital and SanDisk drives are highly portable as well

If portability is your main concern, the Samsung T5, the WD My Passport, or the SanDisk Extreme Portable SSD fit the bill.

The cheapest 1TB SSD that I tested was the WD My Passport SSD, followed closely by the SanDisk Extreme Portable SSD. The Samsung T5 is next, coming in at less than $200. Lacie’s drive is more expensive than Seagate’s, but that’s probably influenced by the fact that you can only find the Lacie version directly from the manufacture. The Glyph Atom SSD is the most expensive drive on this list, coming in just under $300, but it uses significantly higher quality build materials. 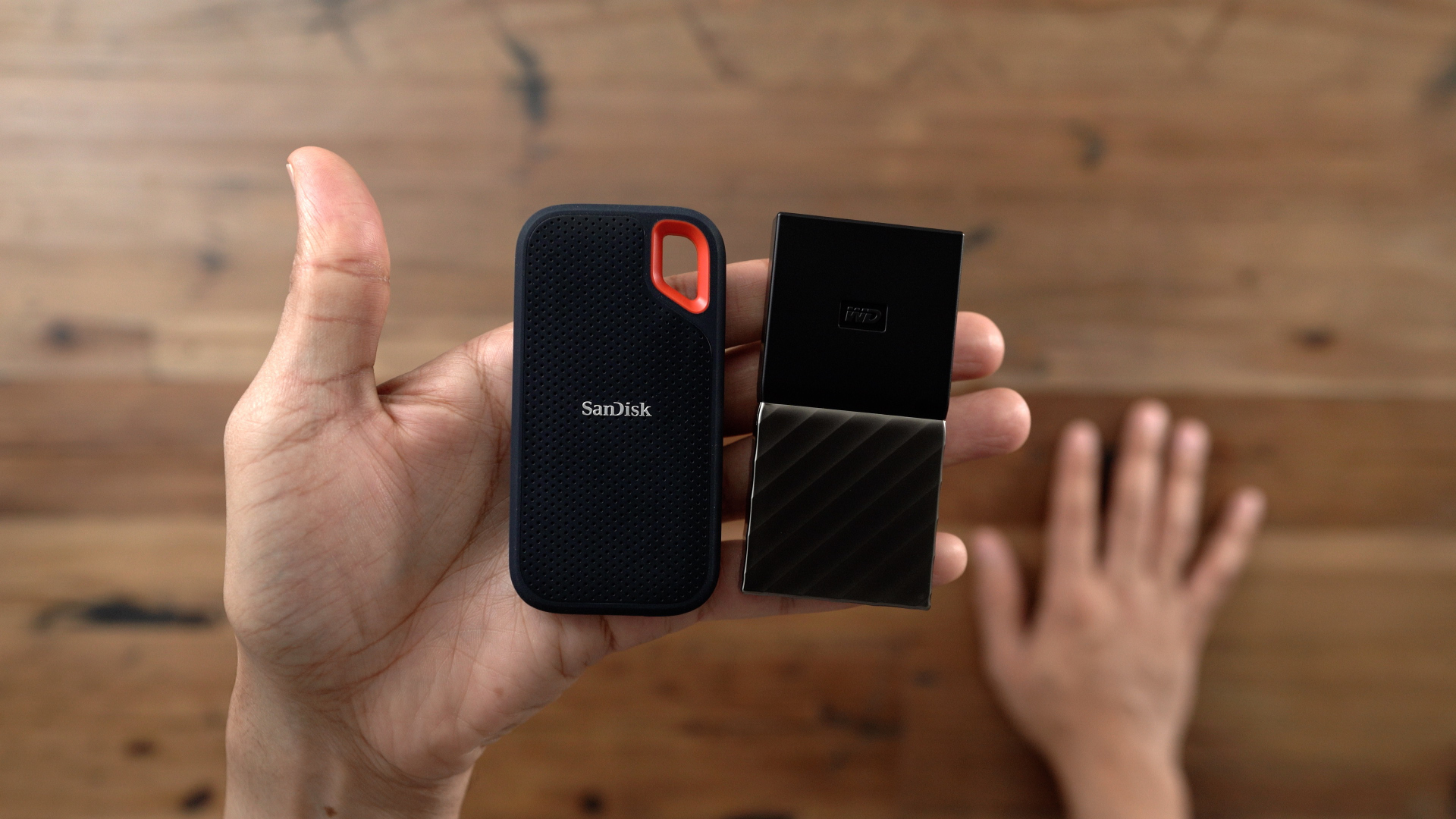 Although the Glyph Atom SSD is technically the “fastest” drive based on my QuickBench benchmarks, the reality is that all of these SSDs feature similar performance. Thus, as I stated above, it’s best to judge these drives based on other qualities. 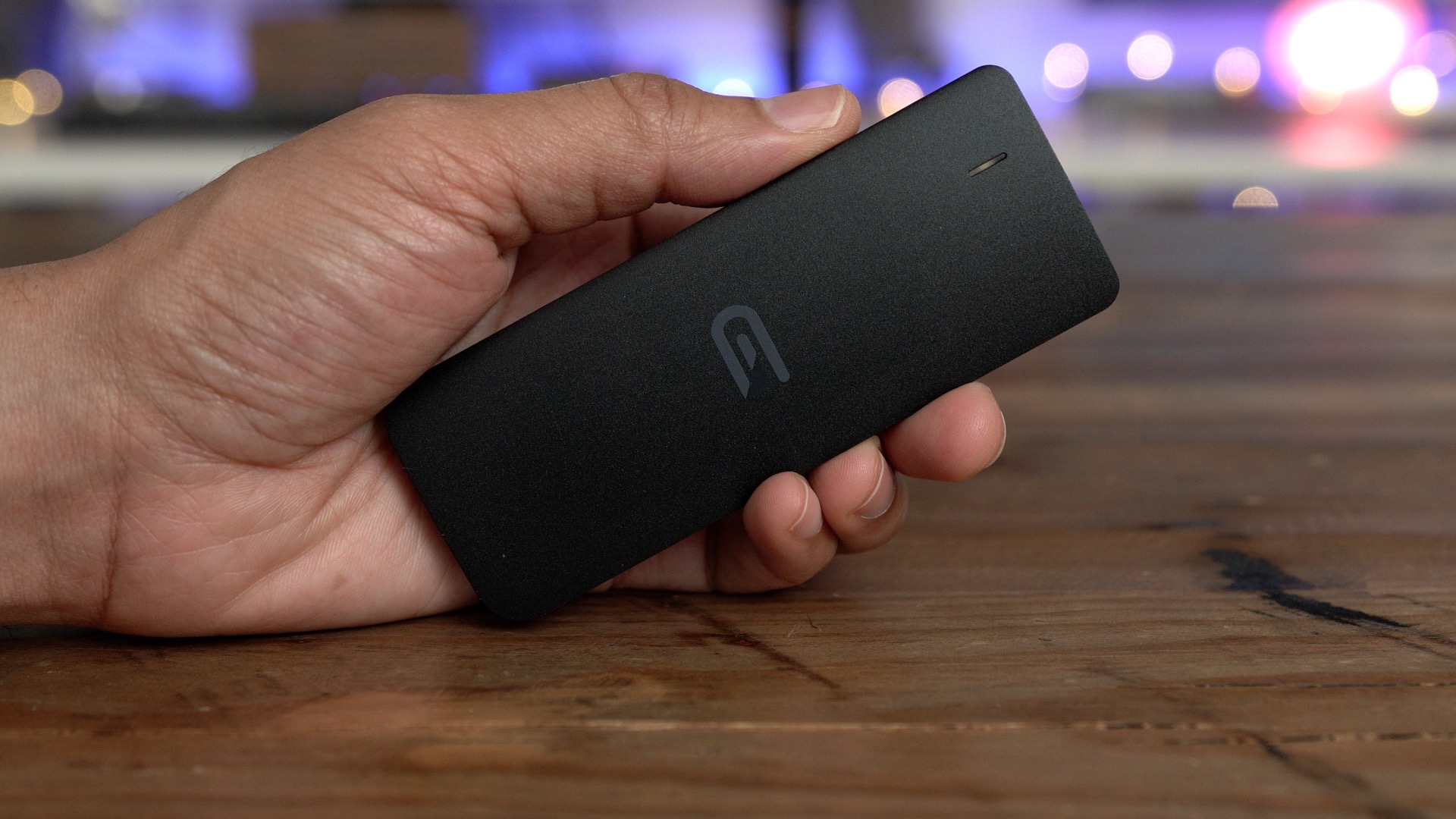 By far the best built portable SSD on this list

All of these drives feature 3-year limited warranties, but If you travel a lot and are hard on your gear, then the Glyph Atom SSD is the best choice based on its durable build quality. If you’re looking for the most portable/pocketable MacBook Air SSD, the Samsung T5 is the drive you should get. If you’re in search of the best value, then the WD My Passport and SanDisk Extreme Portable SSD are both good picks. Finally, if you’re looking for a MacBook Air SSD that features a good mix of all qualities, check out the Seagate Fast and the Lacie Portable SSD.

But if I could only choose one SSD for my MacBook Air, I’d go with the Samsung T5. It’s the most portable drive, it’s fast enough for 4K workflows, features an affordable price, and has great build quality. As a bonus, the unit comes with an activity light that’s not annoyingly-bright or distracting. 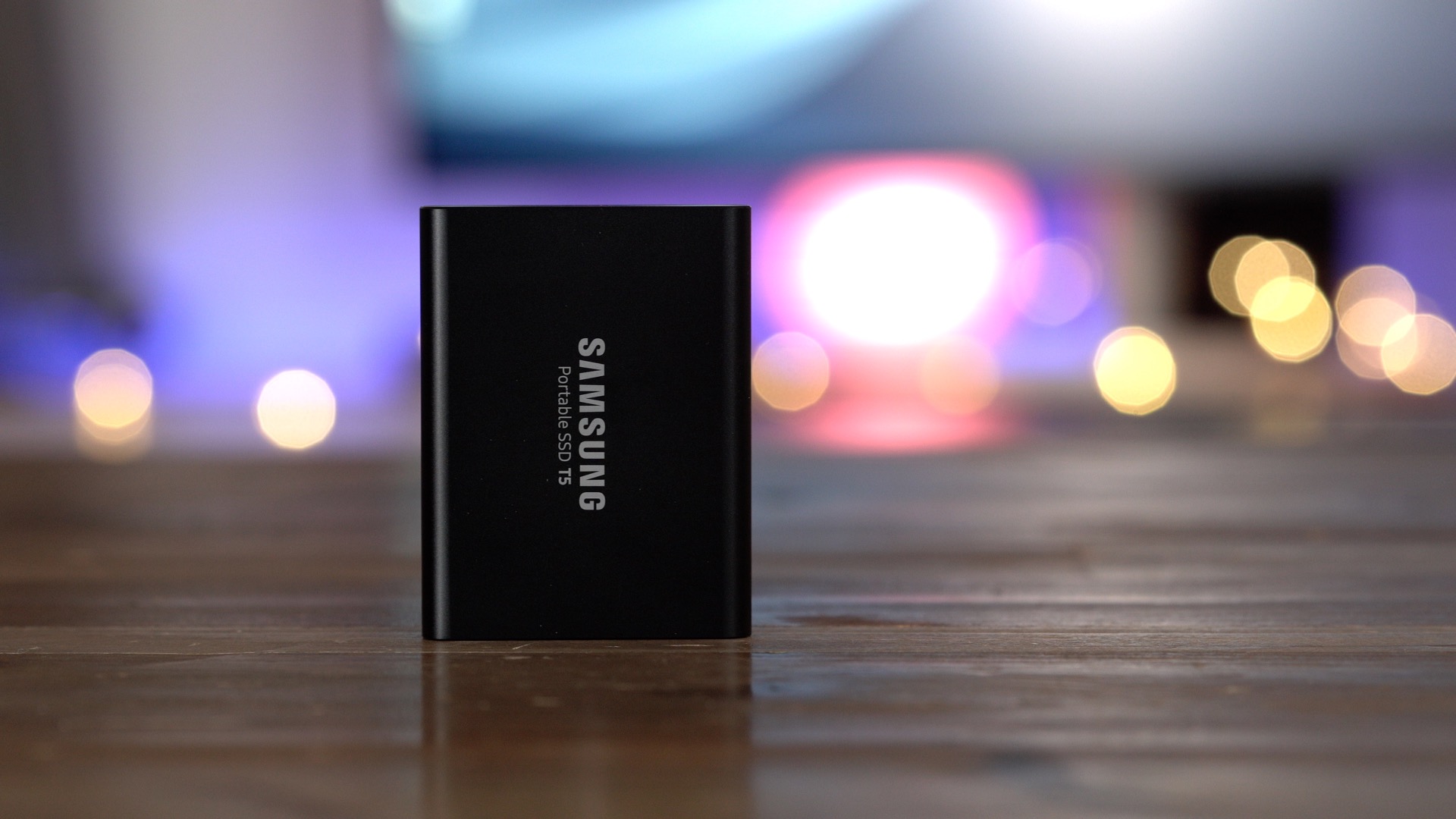 The Samsung T5 is the best external 2018 MacBook Air SSD within the scope of this comparison. Read our full review of the Samsung T5 for more details before finding it over at Amazon or B&H.

Do you agree? What’s your favorite portable drive for Mac? Sound off in the comments with your thoughts.