A market research study by AppsFlyer details the ever-growing mobile advertising world, as $38.9 billion was reportedly spent in 2018, with 34% growth expected by 2020, reaching $64.1 billion, globally.

The study attributes the growth to the fact there are more smartphones than ever paired with an ever-growing app catalogue. Thus, more paid campaigns have resulted in more ad spend than ever.

In North America specifically, 2017 mobile ad spend accounted for $6.5 billion, however, by 2020 that figure is expected to reach about $13 billion. Because North America is “one of the world’s most predominant app markets”, it is estimated to see about a 20% YoY increase over the coming years.

Some interesting data from the report explains that while app installs will grow along with ad spend, install rates will not keep pace with increasing media costs, meaning advertisers will have to be increasingly efficient when marketing for an app download.

Although app install ad spend is predicted to experience the greatest amount of growth through 2020, it is still important to monitor non-organic install trends in order to have the most well-rounded understanding of marketing-driven LTV (lifetime value) potential.

For that reason, it should be noted that, while install growth is significant between 2017 and 2020, this rate will not match the expected rise of media costs. From our data, global installs will grow by 110% into 2020, while North American installs will increase by 73%. Bear in mind that, while both the ad spend and install growth rates maintain the same ratio through 2020, marketers will have to be increasingly efficient in their marketing efforts amid rising media costs 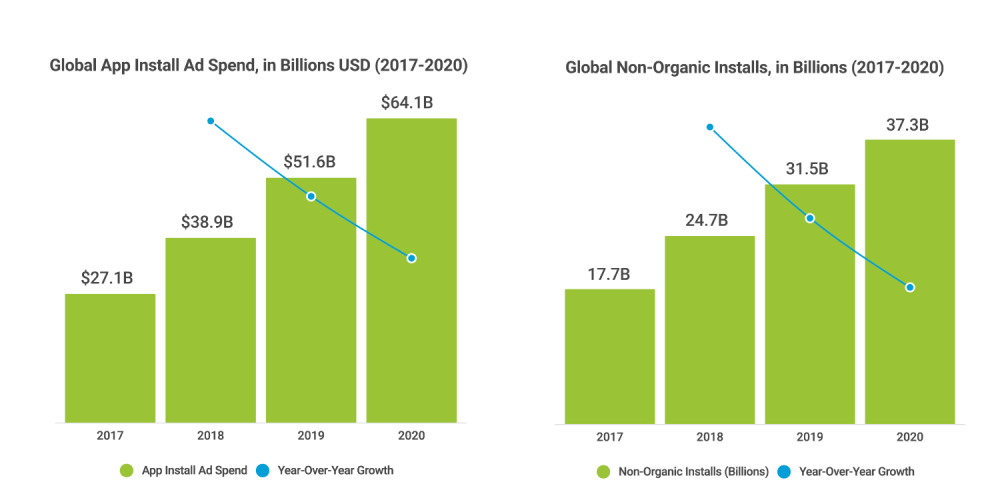 The end of the report offers explanation as to why we’re seeing these growth trends besides the obvious answer of simply more smartphones. It describes gaming as a rapidly growing market ripe to continue thriving as more powerful devices reach the lower tiers of market.

It further divvies up online shopping as another reason for increased growth, as mobile commerce continues to grow YoY.

There are a number of emerging trends which lend themselves to the boom in mobile ad spend and installs. We’ve highlighted a few of the most prominent below heading into 2019:

AppsFlyer explains it generates their own data. In total, the data sampled 35 billion app installs, $10 billion in ad spend, and 70,000 different apps. They further explain they use external parameters such as 3rd party mobile attribution market share data, number of total apps in the app stores studied, and CPI prediction per region.

How often are you inspired by a mobile ad to download an app or purchase a product? Let us know in the comments!