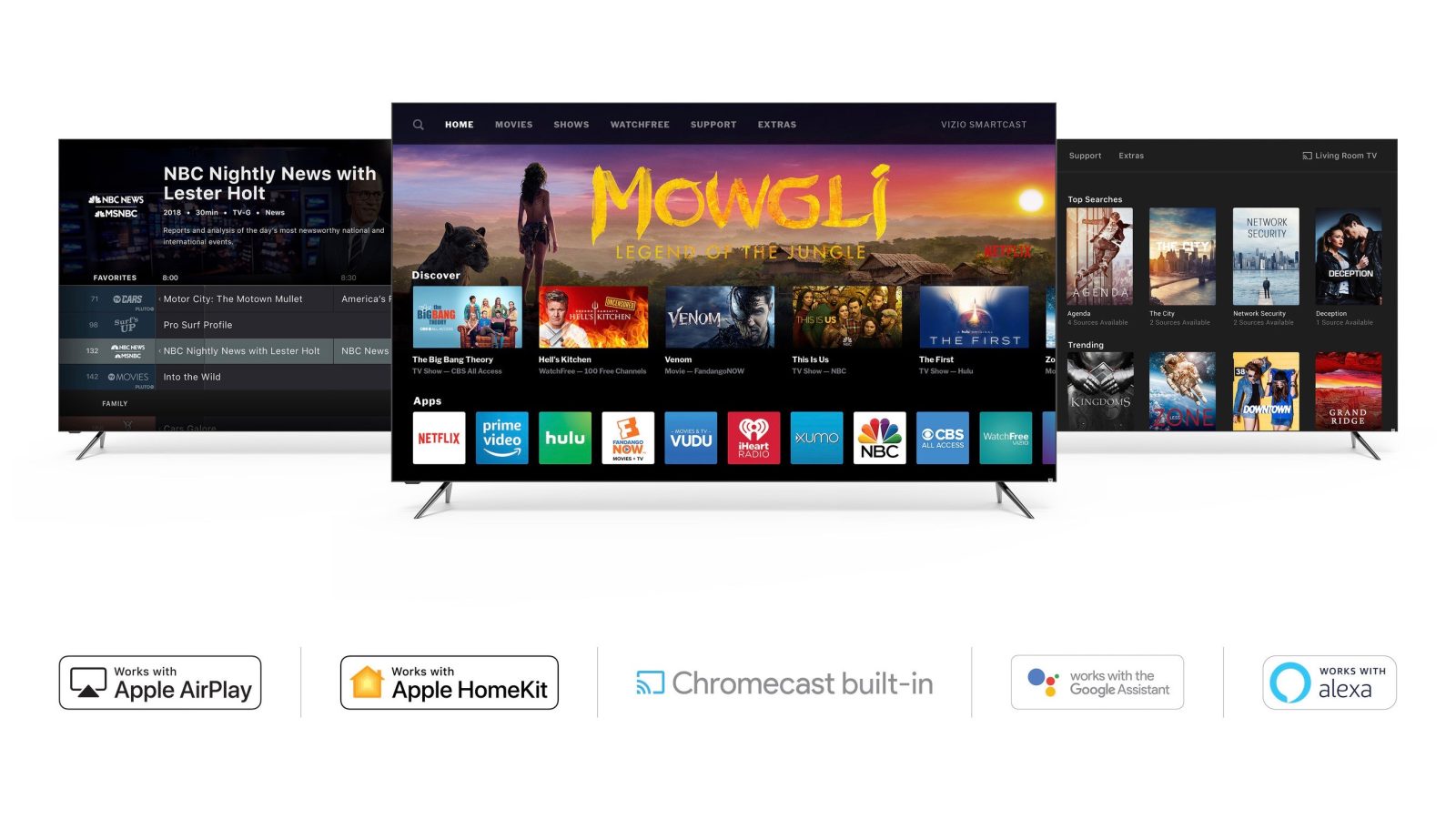 The trend of TV manufacturers integrating AirPlay 2 continues today at CES 2019. Vizio has announced that it is adding AirPlay 2 and HomeKit integration to its existing SmartCast TV platform. Vizio has also unveiled its latest 4K TV updates for 2019.

First and foremost, Vizio says that version 3.0 of its SmartCast platform will add support for AirPlay 2 and HomeKit. The update will be available via a free update to existing SmartCast TVs and displays during the second quarter of 2019.

With AirPlay 2 support, Vizio TV owners will be able to play TV and movie content from their Mac and iOS devices with ease. AirPlay 2 on Vizio TVs will also integrate with multi-room audio setups, support mirroring from iOS and Mac products, and more.

Meanwhile, HomeKit integration with the Vizio SmartCast platform means that your Vizio TV can be added to the Home app and be included in scenes and automation tasks. You’ll be able to use your iPhone iPad, or Siri to control volume, turn your TV on or off, and switch inputs. Further, Siri support means you can ask Siri on your iOS device to play content using AirPlay 2.

“At our core, VIZIO is committed to delivering value. SmartCast 3.0 is one of the ways we’re doing just that. By adding support for Apple AirPlay 2 and HomeKit, users can play content from their iPhone, iPad, and Mac directly to SmartCast TVs, and enable TV controls through the Home app and Siri,” said Bill Baxter, Chief Technology Officer at Vizio.

Vizio is also announcing its latest lineup of TVs at CES 2019. The company is launching ultra high-end P-Series Quantum X, as well as an updated version of the more affordable M-Series. The M-Series adds features like quantum-dot color, additional dimming zones, and more.

Finally, there’s a completely new V-Series line of TVs, which will be Vizio’s most affordable line.

Read the full press release below and keep up with all of our CES 2019 coverage here.

Next-Generation Smart TV Experience Will Be the First in Market to Work with Siri, Google Assistant and Alexa

Support for AirPlay 2 and HomeKit on VIZIO SmartCast TVs will be available for registered beta members across the U.S. and Canada to experience in Q1 2019. Following the beta, VIZIO SmartCast 3.0 will roll out via free cloud-based updates to new and existing SmartCast TVs and displays in Q2 20191.

“At our core, VIZIO is committed to delivering value. SmartCast 3.0 is one of the ways we’re doing just that. By adding support for Apple AirPlay 2 and HomeKit, users can play content from their iPhone, iPad and Mac directly to SmartCast TVs, and enable TV controls through the Home app and Siri,” said Bill Baxter, Chief Technology Officer, VIZIO. “SmartCast 3.0 also supports Google Assistant and provides access to thousands of Google Chromecast-enabled apps. Additional support for Alexa rounds out our voice control offerings, allowing VIZIO SmartCast to seamlessly fit into any household with Siri, Google Assistant or Alexa. We’re excited to be the first in the marketplace to support such a wide range of ways for consumers to sit back and enjoy the entertainment they love.”

With a simple tap of the AirPlay icon, users will be able to stream 4K and Dolby Vision HDR movies and TV shows from iTunes and other video apps as well as music, photos and more directly from their iPhone, iPad and Mac to their SmartCast TVs2. Users can also mirror content such as web pages and presentations to their VIZIO SmartCast TVs. AirPlay 2 also features multi-room audio capabilities so users can listen to Apple Music, music from their iTunes library, and third-party music services as well as podcasts on their VIZIO SmartCast TV, HomePod, Apple’s wireless home music speaker, or other AirPlay 2-compatible speakers at the same time, all in sync.

HomeKit allows customers to easily and securely control smart home products using the Home app or by asking Siri on their Apple devices. VIZIO SmartCast TVs can be added to the Home app and included in scenes or automations like any other HomeKit accessory. Customers can also use iPhone and iPad to turn their SmartCast TV on or off from the Home app, change volume and switch inputs, and ask Siri from iPhone and iPad to play movies, TV shows or music with AirPlay 2.

Rounding out VIZIO SmartCast 3.0 are new Google Assistant and Alexa functionalities along with updates to the intuitive user interface.

Building on existing voice control support, SmartCast 3.0 will offer expanded Google Assistant actions for VIZIO SmartCast TVs. Consumers with a Google Home or Google Assistant-enabled device will have the ability to use simple voice commands to launch apps, select inputs as well as pause, resume, stop, fast-forward, rewind content and more. Users with Alexa-enabled devices can also control their TV, and coming later this year, launch apps without lifting a finger.

More information surrounding VIZIO SmartCast 3.0 will be available closer to launch. To learn more about support for AirPlay 2 and HomeKit, Google Assistant or Alexa visit VIZIO.com.

1The SmartCast 3.0 update is available only to eligible SmartCast TVs and displays enabled with SmartCast Home™, VIZIO’s on-screen smart TV experience 24K and Dolby Vision HDR available via select apps 3The third-party applications and content described herein may only be available in certain countries and languages, may require additional fees or subscription charges, and may be subject to future updates, modifications, interruption and/or discontinuation of service without notice, and VIZIO has no control over such content.