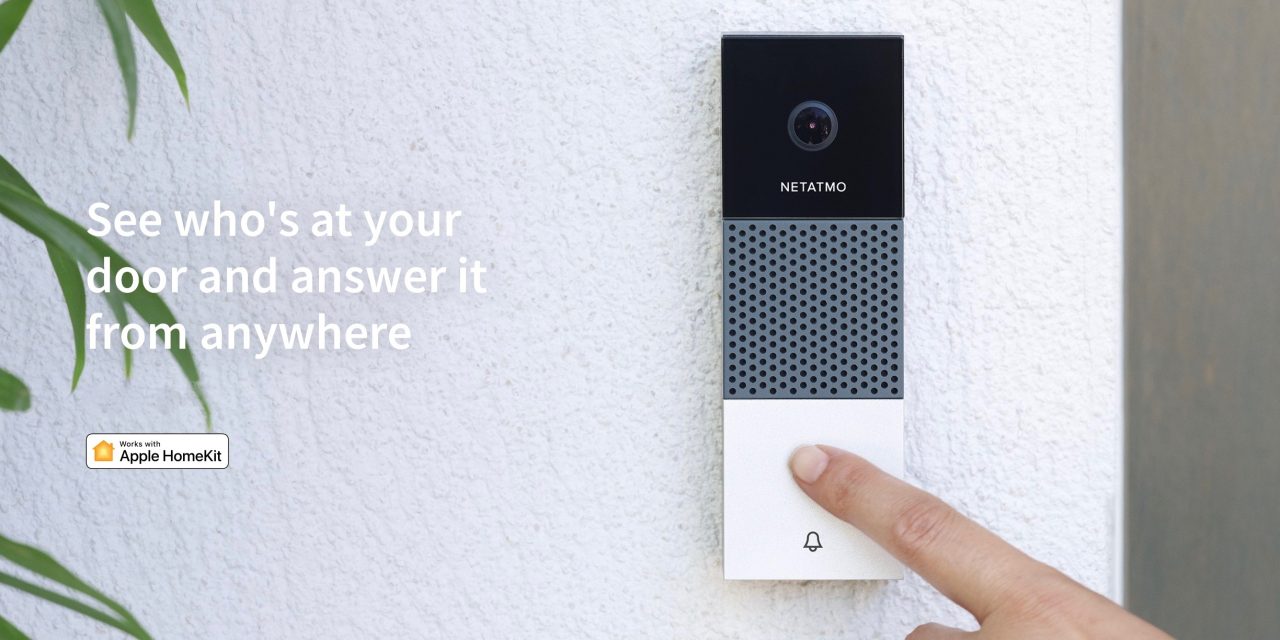 Last Friday, we reported on Robin Telecom being the first company to be marketing a HomeKit supported smart doorbell. Now, it looks like popular smart home company Netatmo will be next to offer a HomeKit doorbell.

Update 1/8/19: Netatmo has officially unveiled its upcoming HomeKit enabled “Smart Video Doorbell.” While the company still hasn’t revealed what could be the first HomeKit enabled doorbell’s price, we now have all the specs.

In addition to HomeKit, one of the great features that should set this video doorbell apart from the competition is free recording. This comes with a micro SD card (supports up to 32GBs) as well as the ability to record directly to Dropbox or another FTP client.

For specs, this HomeKit doorbell will have a 160-degree field of view with 1080P recording. It has a 2 megapixel camera with 5x zoom and night vision via an infrared LED. It is a wired video doorbell, so installation won’t be as easy as the promo video below shows off.

As you would expect, it is weather resistant, and the official announcement brings a closer look at the black, gray and white design.

Netatmo hasn’t shared any more details on a launch date, but the Smart Video Doorbell is expected to ship sometime later this year. It will be interesting to see if the unknown Robin Telecom beats Netatmo to market.

It’s been a long road to seeing HomeKit come to the doorbell category of smart home products. Since 2016 we’ve heard manufacturers like August and Ring make commitments to support Apple’s smart home platform with their video doorbells with nothing coming to fruition.

Things looked even worse last summer after Apple removed the doorbell category entirely from its HomeKit accessories page. Then last Friday, we heard that Robin Telecom was advertising its new ProLine Doorbell as compatible with HomeKit.

Now, we’ve learned that popular smart home player Netatmo is the first well-known brand to announce HomeKit support to the smart doorbell market. This latest news makes it look like 2019 could be the year for the category to flourish.

The news comes from what looks like a slip up on embargoed CES news by Digital Trends (now pulled), spotted by developer Aaron Pearce.

Has to redo that with an amp link as I believe DigitalTrends broke NDA by posting it early. It’s a 404 with a direct link. @apollozac

However, we were able to get a cache of the full Digital Trends post and learn more details about the upcoming Netatmo video doorbell.

The company announced at CES in Las Vegas that it will soon be selling the Netatmo Smart Video Doorbell, a robust, wireless, camera-enabled video doorbell that will add another layer of safety and security for consumers and serve as a rival to devices already flooding the market from brands like Ring and Nest.

It’s tough to tell with the low resolution image we were able to obtain (shown above), but Netatmo’s new HomeKit doorbell looks somewhat similar to August’s upcoming View doorbell. However, it has what looks like a white accent in addition to a space gray aesthetic.

While we don’t know yet who will ship first, but Netatmo believes it will beat Robin Telecom to market:

The Netatmo video doorbell could carry a lot of weight for consumers dedicated to Apple’s ecosystem of products: The company claims that its product is the first doorbell of its kind that is compatible with Apple’s HomeKit platform and can be controlled using the Apple Home app or via voice command using Siri.

A really compelling aspect of Netatmo’s new video doorbell is that Digital Trends says that there won’t be a subscription for video recording, and recordings can be saved on a microSD card as well as services like Dropbox:

There is one more fairly significant twist in the Netatmo Video Doorbell tale. The majority of video doorbell manufacturers take advantage of a secondary income associated with these kinds of devices, namely a subscription fee to record, store, or access a user’s footage. Burying the lede somewhat, Netatmo revealed that their Smart Video Doorbell will come with all features included, including video storage, with no subscription fees or additional costs to use the doorbell or access its data.

There’s no word on pricing for now, but Netatmo’s video doorbell with HomeKit support is scheduled to ship in the second half of 2019.

Back in October, the company’s Welcome smart camera gained HomeKit support. Check out the rest of Netatmo’s smart home procuts on its Amazon storefront.