Apple surprised announced its new HomeKit and AirPlay Smart TV initiative at CES earlier this month, with the first official compatible TVs launching in the spring. As we reported last night, iOS 12.2 includes the necessary foundations to support these new features.

Developer Khaos Tian hacked the HomeKit protocol to simulate adding a smart TV accessory to the Home app. He shared some screenshots and videos of these features ‘in action’ …

By essentially faking the existence of a HomeKit-compatible Smart TV accessory on his network, he was able to add a television tile into his Home app.

This reveals new interfaces for controlling the TV. You can tap on the tile to turn it on or off and access the Details menu to change input. 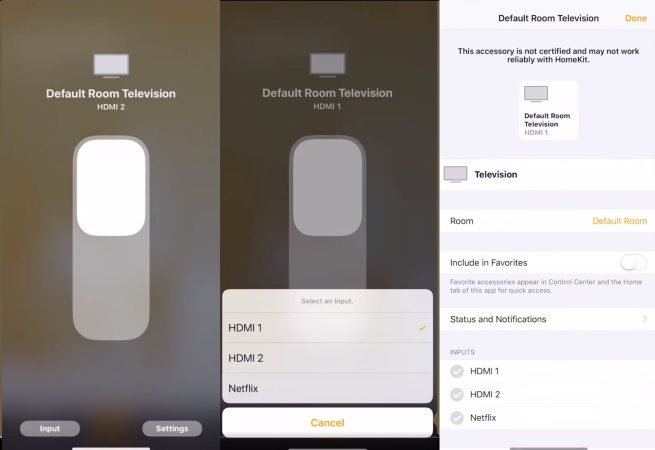 Interestingly, you can also rename the inputs — so HDMI 1 could be labelled as ‘Cable’ or ‘Xbox’ instead. Right now, you can only use Siri voice commands to turn the TV on or off. Hopefully, in a future beta seed you can change inputs with your voice too, using those custom names you picked.

Khaos then went on to contribute TV accessory emulation in Homebridge, the open source HomeKit proxy that allows people to add their own plugins to add unofficial HomeKit integrations with hundreds of devices. He hooked up to his LG TV, that runs webOS. You can see here that the iPhone Remote controls the TV’s interface, and the Apple TV, seamlessly.

Finally, your “Movie Time” can now turn on the TV and switch it to specific input 😍 pic.twitter.com/bokbMmYxe8

Finally, we get confirmation that Smart TVs will be able to participate in HomeKit automations. You will be able to make a nighttime movie scene that dims the lights, turns on the TV and switches input all at once.

Apple TV owners will not be left out in the cold. Many of these features are added to Apple TV as well, when users install the corresponding tvOS 12.2 software update. Colleague Zac Hall was able to test out the Siri voice commands successfully. Just ask Siri on your phone to play something from the iTunes Movies & TV Shows library on the TV … and boom.

iOS 12.2 includes many other enhancements, beyond the new TV stuff. You can see our overview here. Apple has promised that these features will ship to all customers in the spring timeframe.