Survey finds that, ironically, it takes a physical card to persuade some people to use Apple Pay

While regular Apple Pay users tend to love the mobile wallet service, Apple so far hasn’t really hit mass-market adoption. Ironically, it seems a physical Apple Card could be the thing that changes that.

Absolute numbers for Apple Pay sound impressive. Tim Cook announced that there were over a billion Apple Pay transactions in Q3 of 2018, for example. It’s been estimated that around a third of iPhone users have activated it.

But if you look at usage in percentage terms, things look less rosy …

Some three years after it launched, for example, even those who had activated it only used it for 3% of transactions where it was an accepted form of payment.

But a new Business Insider survey suggests that the Apple Card could boost usage significantly. Some 80% of customers would be more likely to use Apple Pay on their iPhone or Apple Watch if they owned the physical card.

Respondents noted the card would make them more likely to pay with Apple Pay, confirming our initial suspicions that the card could give Apple’s mobile wallet a boost.

Nearly 8 in 10 customers would be more likely to pay with their phones if they had Apple Card. When Apple Card was announced earlier this week, we predicted that the card’s incentive structure — which offers higher rewards for mobile payments than for physical card transactions — and feature set would entice Apple Pay usage and make the wallet a more valuable utility to customers. With half of respondents saying they’d be “much more likely” to pay with Apple Pay if they had Apple Card, it looks like it could be a powerful driver of mobile payments.

Adding in ‘somewhat’ and ‘a little’ more likely brings the total to 80%. 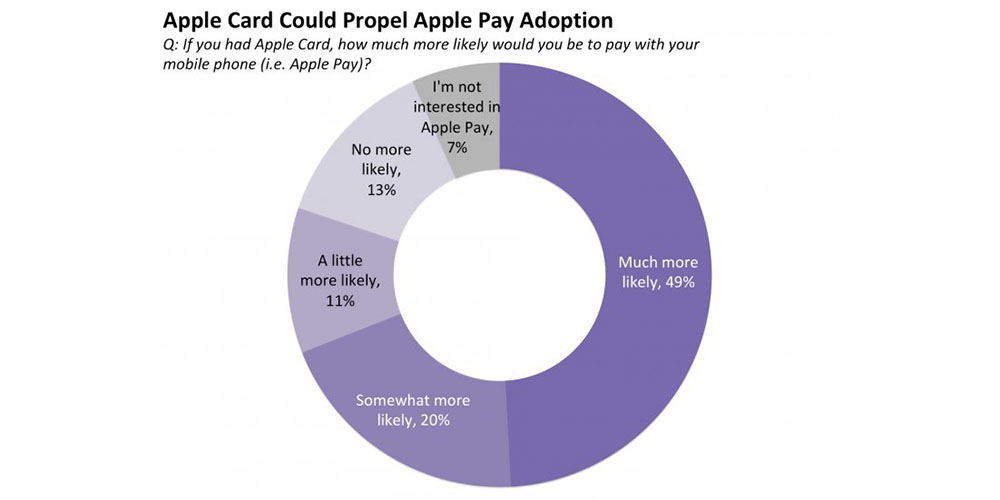 The logic seems to be that people want the physical card for the cool factor, but then the higher cash-back reward will persuade them to use Apple Pay instead.

The survey also echoed earlier reports of the physical Apple Card having surprisingly high appeal. Apple’s promo video on YouTube racked up 15M views in less than two days, and among our own readers the card was deemed to be by far the most interesting announcement during Monday’s event.

Forty-two percent of iPhone users are “extremely interested” in applying for Apple Card. Additionally, just below 15% of respondents show no interest at all, pointing to the product’s broad appeal ahead of its planned launch this summer.

No fees and the cash-back rewards were found to be the most appealing elements of the offer, but a third of those surveyed said that the physical Apple Card design was more important.

We’ve been gradually learning more about the card over the course of the week, including how it integrates into Apple Wallet, possible international rollout, how the physical card will be activated, how Apple will make money and more information on interest rates.