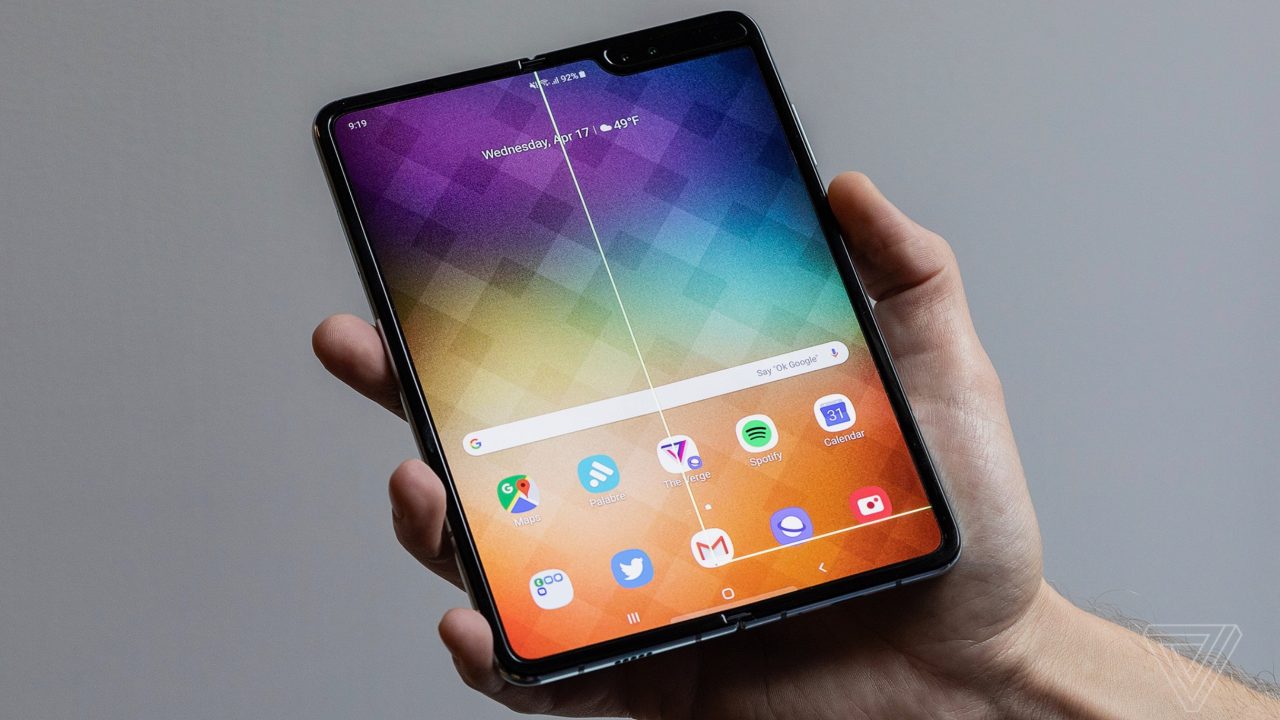 When Samsung unveiled the Galaxy Fold I was admittedly jealous as an iPhone user, and I wasn’t alone. The device has created lots of interest in foldable smartphones, with many dreaming about when Apple might offer a similar device. However, now that reviews are landing for Samsung’s almost $2,000 bleeding-edge tech, the device isn’t looking very appealing. Beyond the displays of multiple review units having already failed, there are a host of other problems with the Galaxy Fold. Are they enough to dissipate the envy of iPhone owners?

The Verge’s Deiter Bohn posted his full review of the Samsung Galaxy Fold today with the title Samsung Galaxy Fold Review: Broken Dream. While he does note some of the compelling aspects of the first foldable smartphone, and how it could be the start of something new, there are many major problems with this device.

If you didn’t already hear, four Galaxy review units saw display failures two days ago. The Verge and CNBC experienced more mysterious failures, while MKBHD and Bloomberg’s Mark Gurman had failures after naturally peeling back a screen protector, that as it turns out wasn’t actually a screen protector.

While that is a serious problem from the start, The Verge’s review takes a deeper look at the device, putting that issue to the side. However, Bohn notes that consumers shouldn’t buy this device until more is discovered about the display problem.

So here’s what I’m going to do: review the Galaxy Fold as if this whole terrible screen breaking thing will get resolved. Don’t take that to mean that I think it absolutely will be or that I think you should dismiss these problems. Entirely the opposite: you should not buy this phone until we get more information — and even then, it’s not a great purchase. 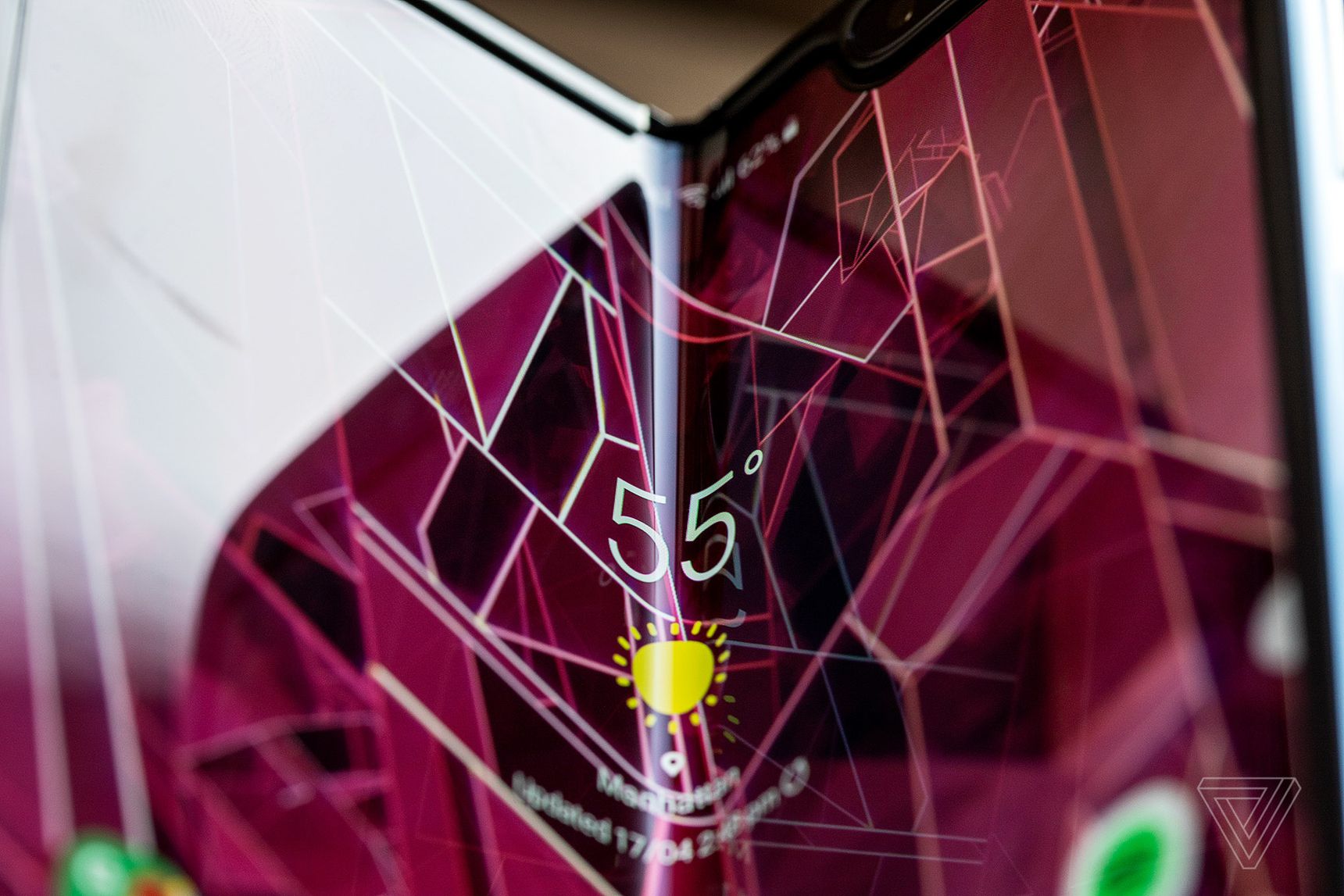 The first problem with a foldable phone that many will ask about is the crease. Bohn notes that it’s “really obvious” and you can’t help but see and feel it. Also, from an angle he noticed different color temps on the sides of the crease.

There’s just no pretending that it isn’t there or that you don’t see it or feel it when you run your finger across it. Especially when you’re looking at it from an angle, it’s just a really obvious line through the middle of the screen. What’s worse, it’s a really obvious line that has two different color temperatures on either side of it when you look at it from an angle.

To be fair, he does mention that it can disappear when looking at the unfolded device straight-on. And there may be a similarity between forgetting about a smartphone notch and this new crease situation.

I stopped seeing it; it is actually difficult to spot when you’re looking at the Fold straight-on, which means that my subjective experience is just that it’s a great little 7-inch tablet.

A couple of other kudos he gives the display before diving into more problems is that it has solid brightness, sharp text, and that “colors are super vivid.” However, there are too many more problems with the display for it to get a passing grade.

the crease is just the start of this screen’s issues. I am sympathetic to the argument that one of the first folding smartphone screens should be judged differently than the screen on a top-tier smartphone like an iPhone or regular Galaxy S phone. But even if you lower or change the bar, you really can’t paper over the rest of the problems with this screen. 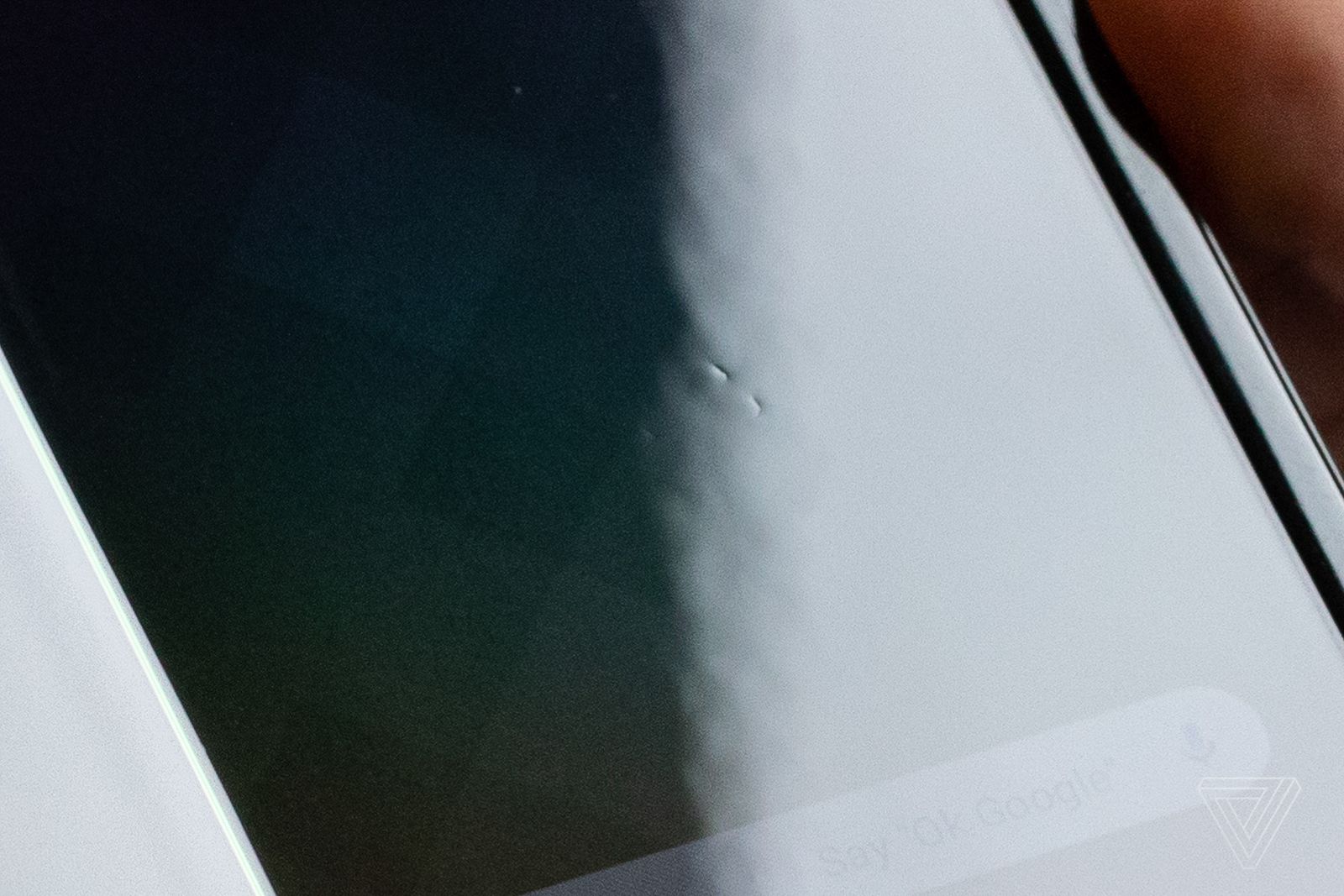 With foldable displays comes a change in materials, and new problems for durability. Bohn found his Galaxy Fold display had nicks and dimples in just a couple of days due to how soft it is.

The blunt fact of the Galaxy Fold’s main screen is that it’s made of plastic and covered over with that thick, polymer layer. It isn’t as smooth as glass, and it’s nowhere near as hard. My second review unit has a little “dimple” in one spot, and in just a couple days of use, it has picked up a half-dozen little nicks.

The review raises serious concerns about the durability and longevity of the Galaxy Fold display.

Those flaws are hard to see when the screen is on, but I shudder to think what this plastic layer is going to look like in a month, six months, or a couple of years. I’ve asked Samsung if it plans to have some sort of extended warranty program to replace that screen protector thing, but it doesn’t have a comment on that.

Bohn believes Samsung should be ready to replace the protective plastic layer for Fold users on a “regular basis.”

Another major problem that offers a rough user experience is the display’s jelly scroll.

I’m not done. There’s one more problem, one that I had hoped to never see again: the dreaded “jelly scroll.” One side of the screen scrolls faster than the other side. I think it’s because, unlike with most other phones, the guts that run the screen are probably on the side instead of on the top or bottom. It’s the sort of thing you won’t notice until it’s pointed out to you. Then you notice it. Then you can’t not see it. 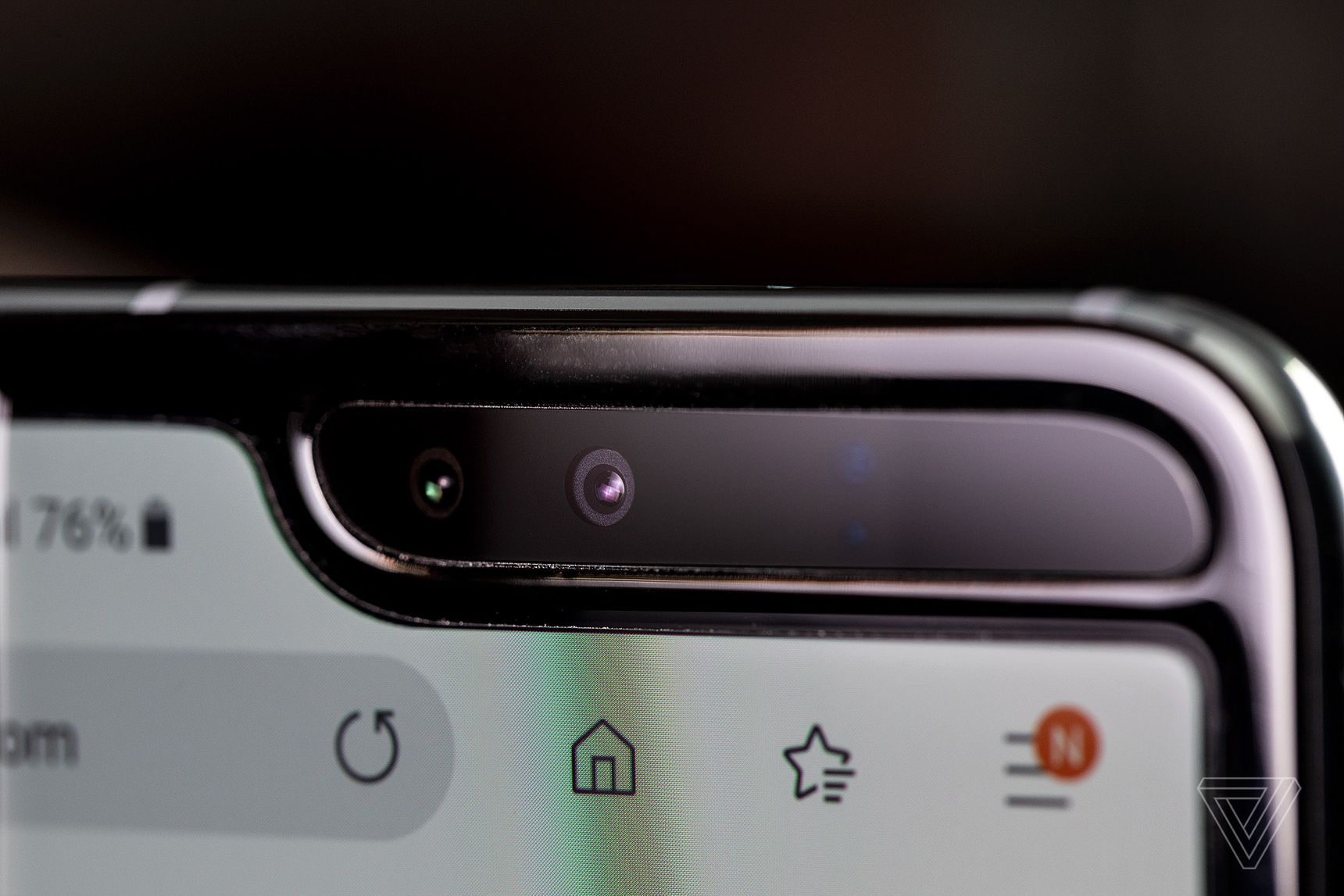 While many have come to accept (and even don’t notice) the smartphone notch in use, Bohn highlights that the cutout on the Galaxy Fold is “really big” and particularly distracting when watching video.

Another thing that’s hard to unsee is the notch at the top right of the screen that houses the cameras. It’s really big. That’s fine when you’re just reading or browsing around on the internet, but it’s terrible when you’re watching video. YouTube, Netflix, and HBO Now all get cut off by the notch.

You can hide the notch with software, but it’s a system-wide setting and you lose a lot of screen in the trade-off.

The Galaxy Fold has also fallen short when it comes to build quality. Bohn notes that the hinge seemed “remarkably solid” until it broke. The device also doesn’t feature any water-resistance, leading him to give the Fold’s build quality a “huge question mark.”

As for how the device feels in hand, the review found more issues. Beyond Bohn finding it tall, skinny, and awkward when folded, it’s also quite thick.

It’s also really thick. Lots of people have made the joke that this feels like two phones taped together, and they’re not wrong.

When it comes to pocketability, more awkwardness:

It’s so tall and so thick that fitting it into a pants pocket is awkward. And if you have smaller pockets, forget about it. You will want to put it in a purse or jacket pocket or just carry it around everywhere.

Bohn had low expectations when it came to software, and the Galaxy Fold delivered above those. However, he notes Android on tablets is lacking.

Overall, the software is better than I expected, but I didn’t expect a lot. Android has never been great on tablets, but Samsung’s One UI helps.

When it comes to multitasking, the Galaxy Fold brings the ability to use three apps at a time, but the review found it to be a sub-par experience compared to iOS on iPad.

It’s definitely less elegant than the relatively simple split-screen-plus-slide-over system the iPad uses. What’s more, if you close the tablet, all of those tiled windows go away, and you lose the state of your workspace.

In the end, Bohn thinks most Fold users will stick with one app at a time and take advantage of the big 7.3-inch unfolded screen.

In closing, Bohn doesn’t believe this is a device that consumers should shell out $2,000 for, but still finds it a compelling idea, and could be the start of something new.

How about you? Does hearing about all the problems with this first generation product relieve any envy you may have had about the Galaxy Fold? Or maybe you were never jealous in the first place? Share your thoughts in the comments below!

Images via The Verge