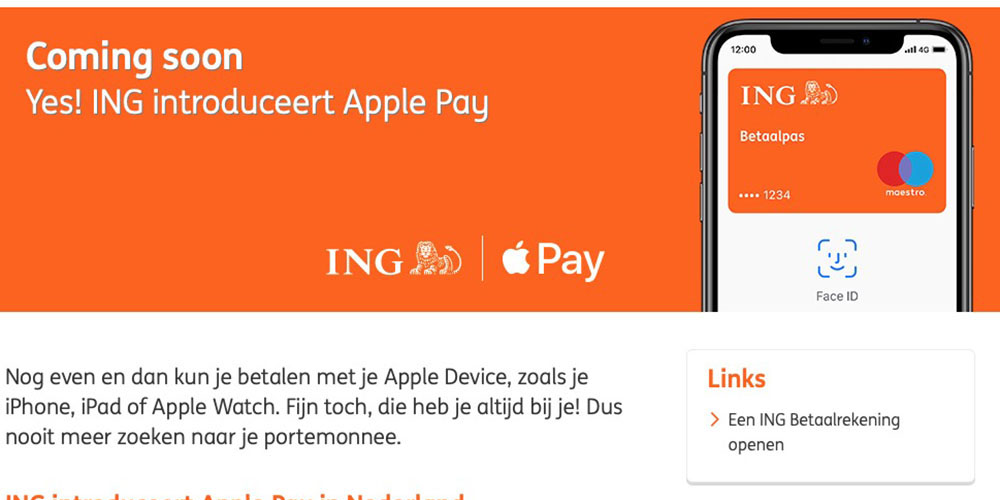 Dutch bank ING has confirmed that Apple Pay is coming to the Netherlands ‘soon.’ The announcement was made on the company’s website.

Soon you can pay with your Apple Device, such as your iPhone, iPad or Apple Watch. Great, you always have it with you! So never search for your wallet again.

We will keep you informed on this page and via social media. And when the time comes, you will receive a message in the Mobile Banking App.

iCulture notes that there had been several earlier clues, but also some false alarms.

Apple Pay had been on the ING website for a while as a payment method and the bank described it as a positive development for users. In recent years there have been several indications that Apple is working on it behind the scenes. For example, the Apple Pay pages were translated into Dutch. Many Apple Pay hints have surfaced in recent months. Most of them were often false alarms, but now it is really coming. After Apple Pay was recently launched in Belgium and the Czech Republic was recently added , the Netherlands was one of the few blind spots in Europe.

The site contacted ING, but the bank said that it is not yet able to disclose the launch date.

ABN AMRO confirmed that it is in talks with Apple about Apple Pay, while other Dutch banks contacted by iCulture were more circumspect. Bunq, which supports Apple Pay in other countries, referred enquiries to Apple. Rabobank said that it is ‘constantly talking to all parties in the market to make paying even easier and safer.’

Volksbank – whose brands include SNS, ASN and RegioBank – sounded least positive about the prospects.

We are currently closely following market developments for payment solutions. We have read the announcement from ING and are curious how things will work in practice. Before we offer it, we think it is important that the service fits in well with what the customer wants and that this is done at a fair price.

Apple said yesterday that the mobile wallet service should be available in 40 countries by the end of the year, which implies three more countries (though Apple mixes countries and regions, making exact counts tricky). CEO Tim Cook also revealed that Apple Pay is coming to MTA in New York in early July, as well as Ticketmaster’s website and app.

We’ll have to wait to learn which other countries are in the pipeline this year, but Apple Pay in the Netherlands certainly appears reasonably imminent.