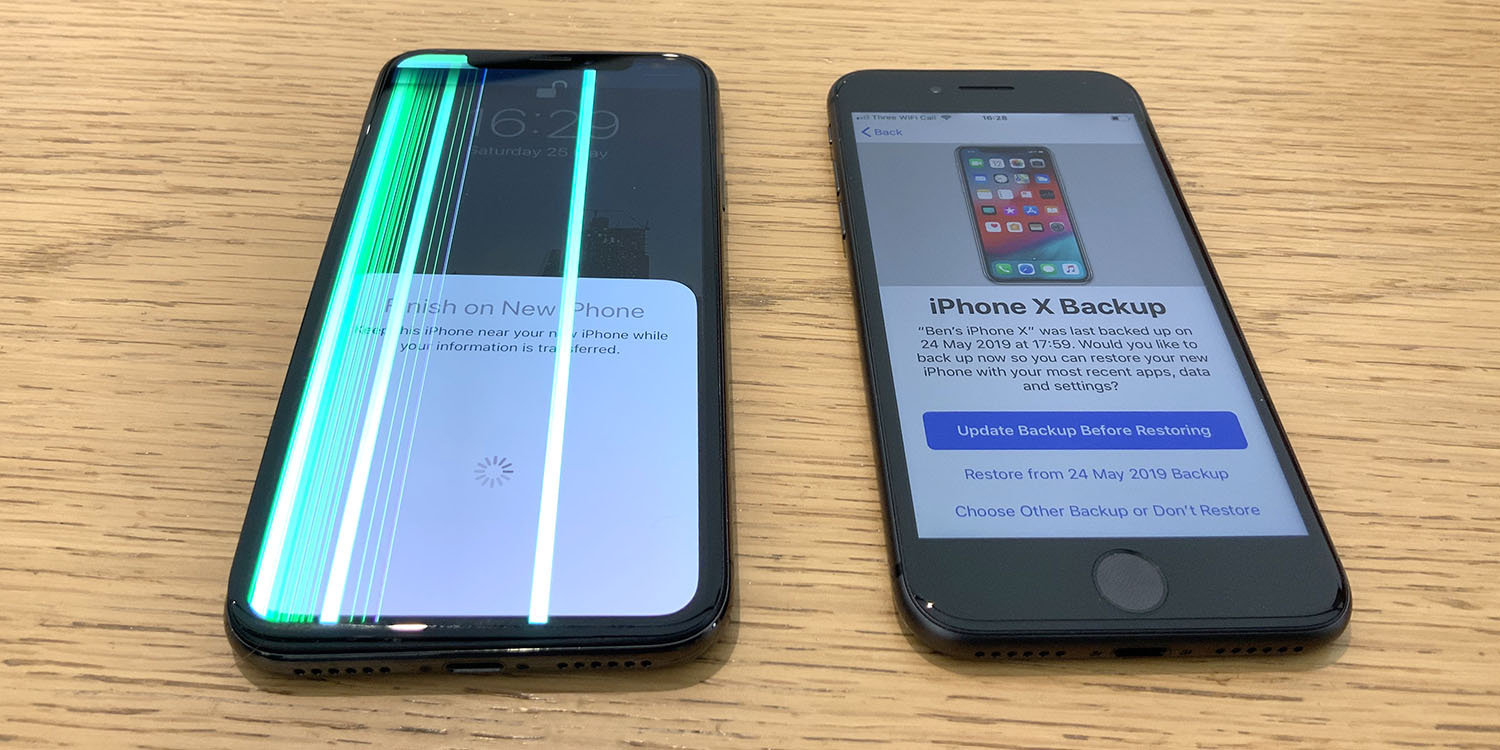 Temporarily using an iPhone 8 has provided a new perspective on the iPhone X series – and really underlined just how far Apple’s iPhone design process has come.

Unsurprisingly, my diary series’ generally result in a flurry of posts early on, as I get to know a new product, with only occasional updates further down the line. My last iPhone X Diary entry was almost a year ago to the day.

The first I knew about a swollen battery on my iPhone X was when the left-hand side of the screen slightly popped out in the centre. In the course of less than half a day, it progressed from there to becoming completely detached along the length of the left-hand side, and the display being damaged as a result.

I took it to the Regent Street Apple Store, and was able to get a walk-in appointment after just a ten-minute wait.

The in-store diagnosis, unsurprisingly, didn’t take long. All the Genius did was run the diagnostics app, presumably to confirm that it was a genuine iPhone with all its original components intact.

I had expected it to be an on-the-spot replacement, but apparently, a safety policy prevents that. Swollen batteries aren’t usually an immediate safety risk, but they are very likely to burst into flames if punctured, and opening the casing in-store is considered too dangerous. For that reason, it’s policy that all devices with suspected swollen batteries are sent to a service center for inspection.

The standard Apple warranty is for one year, and I had wondered whether I’d need to point to EU legislation requiring a minimum two-year warranty, but that wasn’t necessary. The Genius simply said ‘it’s out of warranty, but obviously that shouldn’t happen so it should be a free repair or replacement.’

To ensure that I wasn’t left without a phone in the meantime, I was offered a loaner phone. I was told it might not be an iPhone X, and I said that didn’t matter, any model would do. I’d played safe with storage when I’d bought the phone, opting for the 256GB model, but had actually only used 56GB so far, so a 64GB iPhone would be fine. The fact that I was getting close to 64GB did, however, reassure me that I’d made the right choice.

We were going straight to an event after the store visit, and I needed my phone up-and-running right away, so I used the Quick Start process to wirelessly transfer settings and restore from iCloud backup. I didn’t wait for all my apps to finish loading, leaving the store once I had a usable phone.

The iPhone 8/8 Plus is, of course, the final version of the traditional iPhone form factor, with forehead, chin, and Home button.

The iPhone 8 and iPhone X do have a lot in common. They both have the same A11 chip with M11 co-processor, meaning no difference in performance. They have very similar external dimensions. The same primary and FaceTime cameras, optical image stabilization, auto HDR and quad-LED flash. Video shooting capabilities are also identical. Both have wireless charging. Both displays have P3 color gamut, and True Tone.

So, in a couple of days of use, which of the differences has really stood out?

I’ll start with one difference that really hasn’t: OLED versus LCD displays. To be honest, I think this has been massively overblown. Apple’s LCD screens have always been excellent, and the iPhone 8 one is no exception. There hasn’t been a single moment when I’ve looked at the iPhone 8 screen and missed the iPhone X one – or even noticed any difference at all.

The screen size has been rather noticeable. But definitely not a game-changer for me. More on this in a moment. Mostly, however, it has been the aesthetics of the chin and forehead that has stood out here. As someone now very used to a near-bezel-free front, the design of the iPhone 8 just looks and feels old-fashioned.

I very rarely use Portrait Mode, so losing that hasn’t bothered me, but I do often use the telephoto camera, so I have missed that. It’s not a huge deal – the vast majority of my iPhone shots are merely intended for casual viewing on-screen and sharing on social media – so there’s plenty of resolution to spare for digital zoom, but the convenience of physical zoom is something I’ve missed.

However, there is one iPhone X feature I miss massively – and that’s Face ID. To me, the difference is night-and-day. Somewhat for unlocking the phone. Swiping up on the iPhone X can be done very casually, and Face ID unlocks instantly; having to position a thumb on the Touch ID button feels clunkier in comparison.

But much more for apps. I use Face ID with my banking apps, for example, and on the iPhone X I just open the app, briefly see the Face ID unlock confirmation and I’m in. It’s absolutely seamless, and the feeling is as if there’s no security step at all. Having to physically place my thumb on the Touch ID sensor is the ultimate example of a First World Problem, I know, but it undeniably does feel like a big backward step to me.

There’s also the Home button. I’m really used to just swiping up with my thumb to return to the Home screen, or to force-quit an app, and using the Home button to do it again feels clunky.

It’s all trivial, of course. I’m not sat here feeling frustrated at using an iPhone 8. It’s still a very lovely phone, and I’m using it perfectly happily. But it does very definitely now feel to me like it belongs to a previous era in iPhone design, and I will be happy to return to the iPhone X.

As regular readers know, I was very fond of my iPhone SE, and still have a soft spot for it. Indeed, I was half-hoping my loaner phone would be an SE. I was long hoping Apple would make an iPhone SE 2 with the iPhone X design language, and was incredibly disappointed when I had to reluctantly conclude that all hope was lost.

Is all hope still lost? I think so, but I do have perhaps a tiny bit more hope than I did. Declining iPhone sales, and subsequent price-breaks may have had Apple rethink its future lineup plans. An iPhone SE 2 with a near-bezel-free design wouldn’t be a cheap iPhone, but it could be made for a lower cost than the iPhone X/XS thanks to smaller screen size. Max out the storage at 128GB instead of 256GB (or 256GB instead of 512GB, if Apple upgrades the flagship storage tiers this year). Make a few other small compromises. I’d accept that.

Give me an iPhone 8 size display in an iPhone SE housing, and that’s a phone I’d buy immediately.