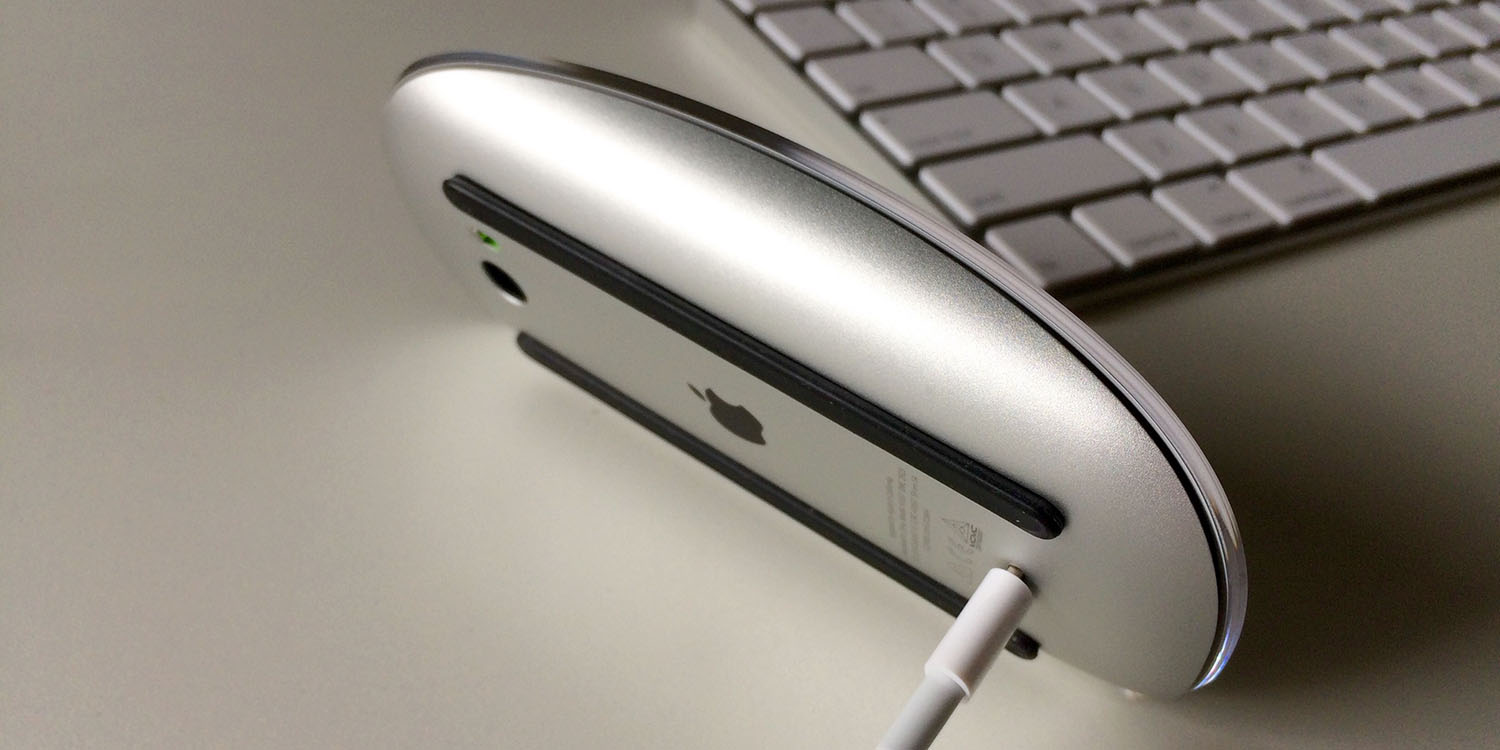 Apple’s Magic Mouse is both beautiful and clever in its functionality. But there’s one Magic Mouse problem so obvious and annoying, it’s become universally mocked: you can’t use the mouse while charging it.

There are five possible solutions to this …

Wired port at the front

The obvious one, of course, is to put the charging point at the front of the mouse. In that way, you can just plug in a charging cable and continue to use it exactly as you would a wired mouse.

It’s widely assumed the reason Apple didn’t do this is because Jony Ive prioritized aesthetics over functionality, and didn’t want a visible port spoiling the clean lines of the mouse.

Another solution would be a wireless charging pad the same size as the mouse. Simply put your mouse on it when not in use, and it would be topped-up.

There used to be a third-party solution for this, where you fit a battery-pack with a built-in inductive charging loop. Another product from the same company offered a pack that worked with the Magic Keyboard or Magic Trackpad too. Neither product appears to be available today, however.

A third solution was suggested by Business Insider’s Dave Smith.

A great solution would be to build a mouse pad that wirelessly charges the mouse. For example, I have Logitech’s wireless G903 gaming mouse and the Logitech G Power Play wireless charging mat, which keeps the mouse charged at all times. I never have to think about it.

This is a neat approach, the mouse being continuously charged whether or not you’re using it.

An Apple charging mat would likely be white instead of black, to match the mouse, but not everyone likes to use a mouse mat. Some prefer their desk to look as minimalist as the mouse.

In theory, we could cut out the need for a charger altogether, and go with solar power. There are already solar-powered keyboards out there, and there have been attempts at solar-powered mice.

There are, however, three problems with this idea for a mouse – one generic, and two specific to the Magic Keyboard.

The generic issue is that a mouse offers a much smaller area for solar panels, and they would only charge when not in use – as your hand would be covering the panels while using it. That might still be ok, given the extremely low power requirement of a mouse, but there are two Apple-specific issues.

First, Apple already uses the surface of the mouse as a multi-touch surface, for gestures, so the surface isn’t available for solar panels. This could potentially be solved by making it transparent (the multi-touch layer of an iPhone screen is of course transparent), and then place the solar panels beneath it.

But that’s where we hit the second Apple-specific problem: Jony Ive is exceedingly unlikely to sign-off on what would be a messier appearance.

The holy grail of wireless charging is what I consider to be true wireless charging – where devices simply charge through the air. That’s a whole other level to Qi charging, where you still require visible wires, they simply go to a pad or mat instead of the device itself.

Much has been promised here. Energous has been touting its WattUp system since 2015, claiming to charge devices up to 20 feet away from something that would look much like a Wi-Fi router. The dream would be one of these in a room, and every device in it wirelessly charged.

There was even a suggestion of Apple partnering with Energous, with apparent evidence that turned out to be far less interesting.

The reality of the technology, however, is very different, as I explained back in 2018.

Radio waves (and RF power is just a specific form of the same) are subject to the inverse-square law. This states that intensity is inversely proportional to the square of the distance from a source.

So that kind of power delivery is a complete non-starter for an iPhone, let alone a Mac. But a mouse? That could be feasible at up to six feet.

Ultimately, then, Apple could offer a true wireless charger that would keep a Magic Keyboard, Magic Trackpad, and Magic Mouse topped-up with power, anywhere on your desk. The ideal here would be to build the charger into a monitor – but that would require Apple to make a monitor for the rest of us, not just that uber-expensive pro one. (That’s a post I’ll save for another day …)

How should Apple fix its Magic Mouse problem?

Which approach do you favor? Please take our poll, and share your thoughts in the comments.