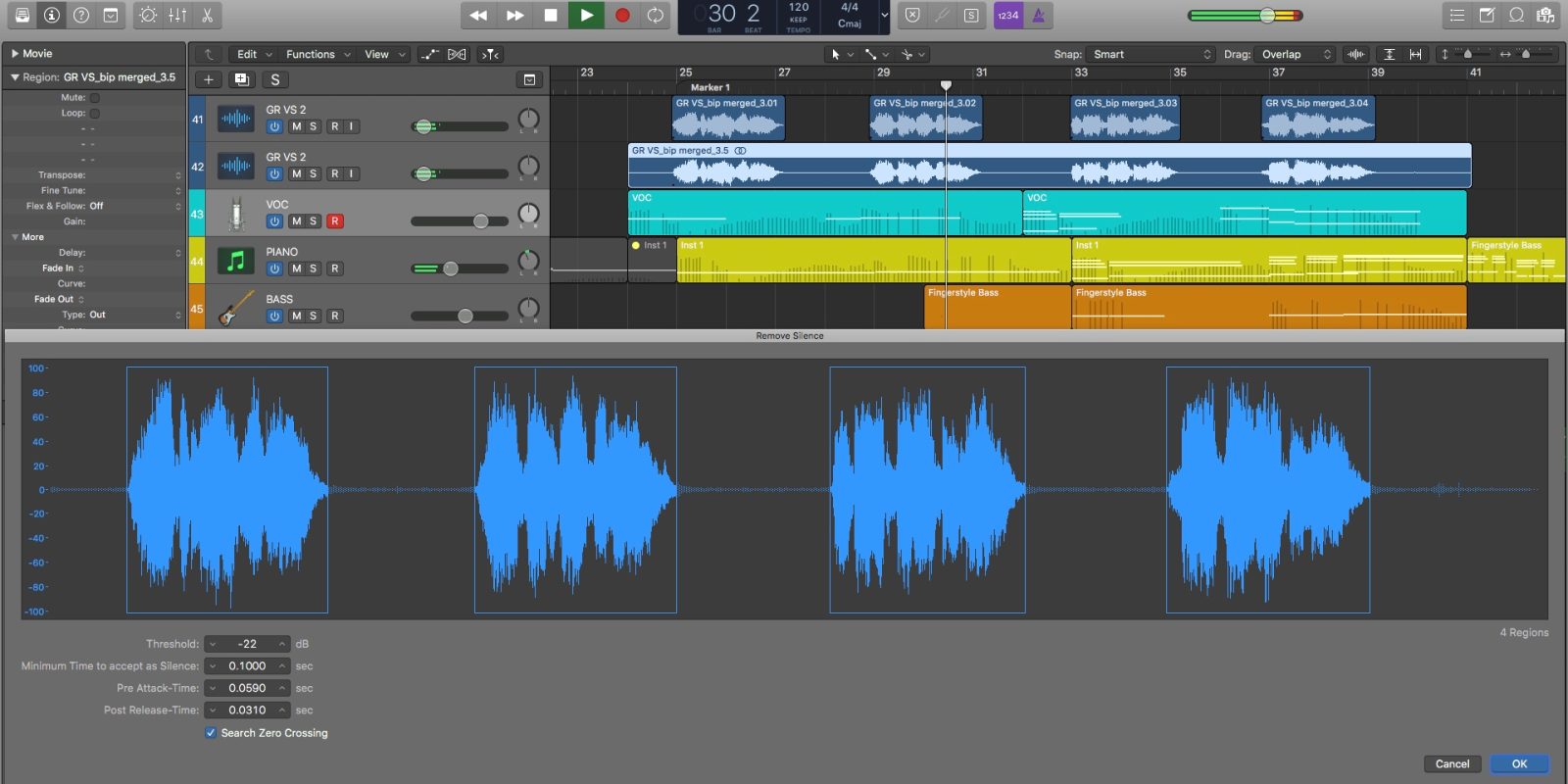 After reviewing a number of quality of life techniques recently, today we are taking a closer look at how to Remove Silence in Logic Pro X. Anyone who records audio will know good and well how tedious it can be to edit the undesirable noise out of a recording. While we have looked at some manual options in the past for precision edits, Logic’s Remove Silence feature can get the job done in just a couple clicks or less.

Whether it’s removing bleed from drum passages, the silence in between vocal phrases or any other unwanted noise, manually taking care of these issues can be cumbersome. While editing with Logic’s Marquee/Fade tools and Selection-Based Processing is certainly necessary at times, even in those cases, the Remove Silence feature is a great way to get the ball rolling. However, in many scenarios, it will be all you’ll need.

What is the Remove Silence in Logic?

It is a basic tool you can use to remove the unwanted noise in an audio region. By analyzing a selected audio region’s waveform information and transients, Logic will determine what parts of the audio is to be kept, and which of it is silence (or unwanted noise) to be removed or deleted. Using a series of basic controls, you can influence the way with which that determination is made. In other words, Logic will analyze the file automatically for you, and then using the visual aid provided, we can adjust the Threshold, Minimum Time, Pre-Attack, and Post-Release settings to ensure it is only removing the parts of the file we want. At which point, the audio region will then get automatically chopped up — the original performance otherwise untouched — into new regions with all of the unwanted or noisy areas in the original selection removed.

The best and fastest way to access the Remove Silence feature is to select or highlight an audio region on the Main Window/tracks page. Then just hit Control + X to bring up the feature’s UI. From there, Logic will present you with a visual representation of the audio region selected along with a series of controls for adjusting the degree of silence/noise to be removed.

Threshold is how we adjust the sensitivity. It is used to define the amplitude or loudness a waveform must exceed in order to be considered a region, as opposed to noise that will be removed. In other words, you can use this control in tandem with the visual aid to determine what parts of the audio region to keep and what to remove (represented by the grayed-out portions as seen above).

You can think of the following three perimeters as ways to fine-tune the setting you have made on the Threshold. Once you’ve got the Threshold at its ideal setting for your selected audio region, you can then use the Minimum Time, Attack, and Release settings to smooth out the selections and ensure none of the desired parts of the audio region are being cut off.

Minimum Time to accept as Silence is used to define the length of time an area of your selected audio region must be under the set Threshold to be considered noise. That’s a mouthful, I know. But, if you’re still seeing some of the unwanted background noise (or quiet noise) not being removed via the visual aid, try adjusting this value slowly until it gets closer to your desired outcome.

Pre-Attack Time and Post-Release Time allow us to adjust to beginning and end point of each of the newly created regions. We can use these controls to add a little bit of extra time before and after the new regions in order to ensure none of the good stuff gets deleted or chopped off with the rest of the unwanted noise.

Note: None of the selections or alterations made via the Remove Silence in Logic will change the timing or position of the audio in the project.

The Search Zero Crossing check box is also notable. While there are some very specific cases where disabling this option is useful, for the most part, you’ll want it engaged. It will bump the edges of the newly created regions, based on your Pre-Attack and Post-Release settings, to the nearest zero crossing. You can think of it like this: It will automatically snap the region’s start and end point to the nearest and most “quiet” spot in the recording to minimize ugly clips and pops.

Once you have the four settings the way you like based on the visual feedback, simply hit the OK button in the lower-right corner to complete the job. The original region selection will then automatically be chopped in to new regions and is otherwise left on the track just as it was beforehand. One quick key command, a few minor adjustments, and all the noise in the selection is gone. Logic will also remember your settings the next time you open the Remove Silence window, which makes for even faster edits, especially when dealing with similarly recorded audio files.

Note: Using Remove Silence in Logic is not permanent and can be undone (Command + Z). You can also simply drag the edges of the newly created regions if some of the edits need to be reconsidered at a later point in production.

Despite the Zero Crossing option, it can still a good idea to make use of the Fade tool or the fade function in Logic’s Inspector to ensure your edits are silky smooth. Simply select all the newly created, noise-free regions the Remove Silence function just helped you make (they will automatically be selected immediately after you hit the OK button). Then go to the Region menu at the top of the Inspector (Hit the I key to open the Inspector), unfurl the “More” section (seen in the top left above), and apply fades to all the regions at once, with the Fade In and Fade Out options.