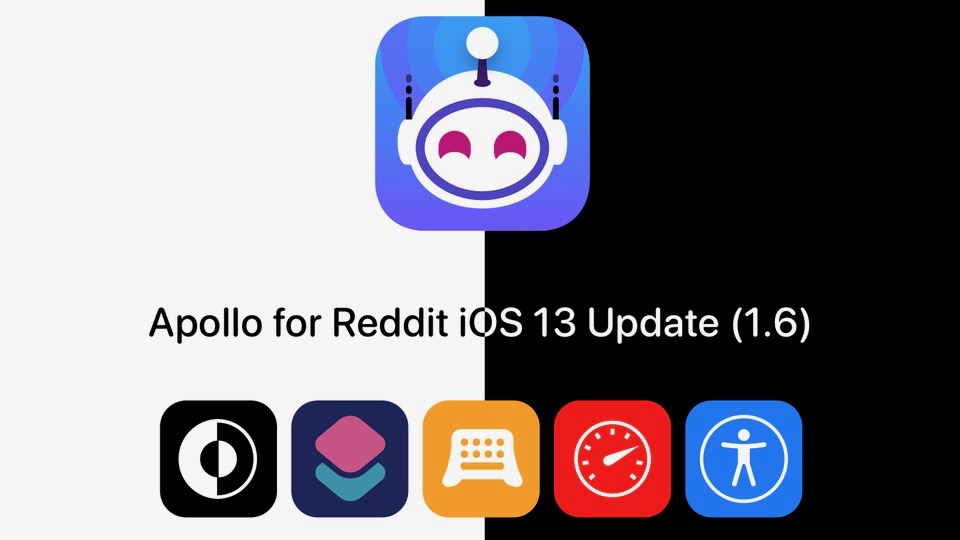 The great iOS app, Apollo for Reddit has been updated today to take advantage of iOS 13. The new release brings support for Dark Mode and new game controllers, Siri Shortcuts with parameters, improved speed, Accessibility features, and much more.

Apollo for Reddit 1.6 arrives after version 1.5 landed just earlier this month with a bunch of great improvements. The latest update leverages the improvements that come with iOS 13 like the system-wide Dark Mode, support for new game controllers from Xbox and Playstation, Siri Shortcuts with parameters, reduced app size, and improved speed. There’s a lot more like multiwindow support for iPad when iPadOS 13 lands next week, new Haptic Touch context menus, and bugs fixes and performance improvements.

Apollo for Reddit is a free download for iPhone and iPad and has in-app purchases to unlock all features. There are monthly subscription options starting from $0.99 and yearly plans from $9.99. The latest update is available now.

Alongside today’s release of iOS 13, Apollo version 1.6 is now out with support for iOS 13! I’ve been working really, really hard to get this update out and I really hope you like it. iOS 13 has a ton of really awesome features that honestly make it an awesome update, and given that Apollo’s built to be a really powerful, iOS-focused Reddit client, I wanted to support as many iOS 13 features as I could right from the get go.

This update brings a bunch of awesome changes for the brand new iOS 13!

First and foremost, Apollo has some great new visual touches, like supporting the new Dark Mode in iOS 13! So if you enable Dark Mode system wide, Apollo will follow the rest of the apps as well as iOS in pulling the curtains down, giving you a beautiful, dark look. You can customize this in Apollo’s settings as well, from themes to how dark you want “dark” to be, and more! There’s also refreshed icons, new inset lists like on Profile, and more!

iOS 13 also brought about a bunch of awesome speed and size improvements. Apollo should be (even more of) a lean, mean, fighting machine. The app is smaller to download, and much quicker to open to boot. Nice! Enjoy Redditing with even more speed than you were used to before.

Siri Shortcuts support! Apollo now works with the (now built-in) Siri Shortcuts app, so you can set up custom shortcut scripts that work with Apollo (like opening subreddits, users, etc.) or even program them to work with Siri. There’s no better way to start your day than with a custom command like “Hey siri, fire the meme cannon” to open r/memes or “give me something to laugh at” and have it open r/WhatCouldGoWrong.

Keyboard and Game Controller support. In addition to previous game controller support, iOS 13 added support for some very popular console controllers, so those all now work with Apollo, in addition to regular hardware keyboards, like keyboard cases! So now you can kick your feet up with a controller, or set up a keyboard, and navigate Apollo with ease, opening and reading comments, opening and closing the media viewer, etc. If there’s more functionality you’d like to see here, tell me, I’m just getting started!

Better Accessibility support. I want Apollo to be the best browsing experience for Reddit for everyone, so I worked really hard to improve how accessible Apollo is for everyone. It now has much, much improved VoiceOver support for navigating the UI, even with custom swiping actions to open the media viewer for instance. In addition it also supports iOS 13’s new Voice Control feature, so you can control Apollo without even touching it. This is another area I’m just getting started with and would love your feedback if you’re willing to provide!

There’s also LOTS more improvements, like being able to open multiple, different windows of Apollo on iPads, which is a personal favorite of mine and great for referencing multiple things on Reddit at once. Before iOS 13 you’d need 3 iPads to view 3 different Apollo windows, now you can do it with one iPad! Talk about cost savings!

There’s also support for the new, beautiful Haptic Touch Context Menus in iOS 13, so every device can now preview media beautifully and easily.

In addition to the above, there’s a bunch of bug fixes to things like random unresponsiveness, message bars reappearing like ghosts, crashes that could happen when marking posts read, listened to feedback on how the Inbox tab tapping behavior was a little weird, and much more! Being a brand new operating system too, it’s possible Apollo might have a few bugs here and there while getting used to all the cool new things, so if you encounter anything weird give me a shout through the app and I’ll fix ’em up!

Onward and upward! As always, thank you so much for the support, a tip helps immensely if you’re really enjoying Apollo. :)

An update will be submitted within approximately an hour that fixes these, so fear not.

iOS 13 is also still quite new, so if there’s a few abnormalities with Apollo on iOS 13 let me know!! It’s possible there’s some rough edges, but I’ll work quickly to address them!

Between this update and the previous 1.5 update a little while ago it’s been a really busy/hectic summer. Your support and kindness honestly helps so much when things get stressful, so seriously, thank you and I hope you enjoy the update. Have a few more juicy updates planned before the year concludes too. :)