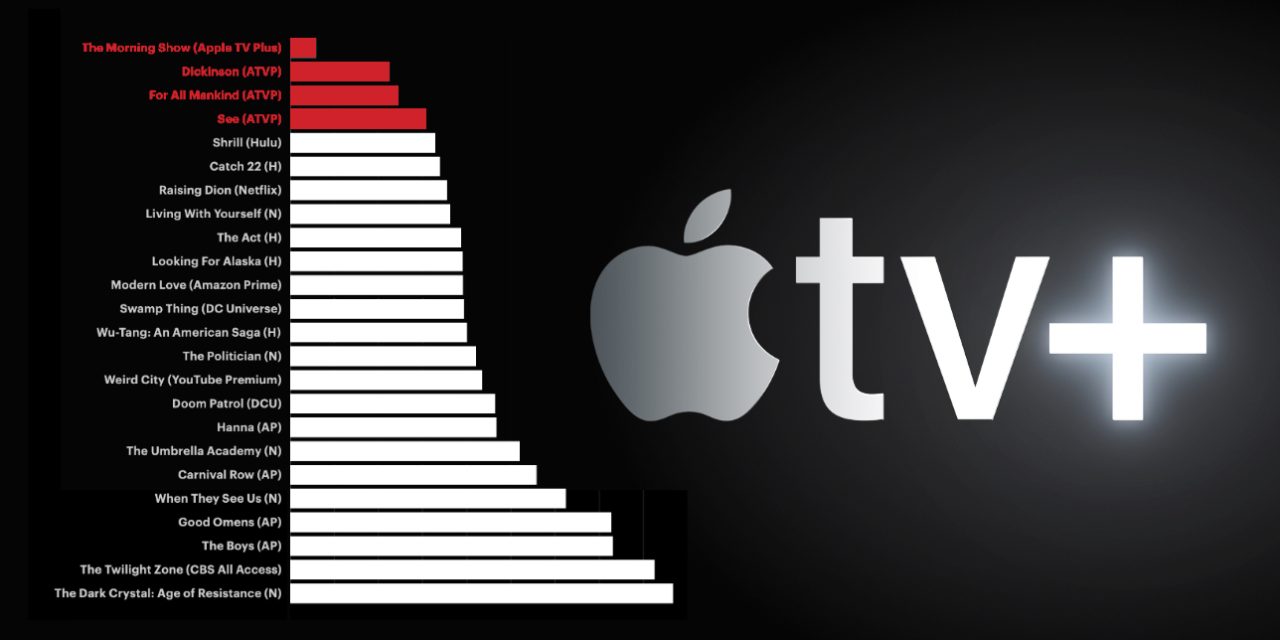 Apple TV+ launched on Friday to much fanfare in the tech community but it’s still unclear how many people Apple managed to attract to watch its debut slate of shows.

A report from Parrot Analytics predicts interest in Apple’s premiere content is far behind the top shows on Netflix, at least right now. Separately, a report from Reuters indicates that Showtime is in talks with Apple about a possible bundle deal.

It’s hard to say whether Apple TV+ has been a success so far. Apple has juiced interest with promotions like the one-year-free-trial with a new Apple device purchase since September 10.

However, the one-year-deal will ‘only’ apply to about 50 million users as of November 1st. Apple will sell a lot more eligible devices in the next few months, especially for the holiday shopping period. Some users are also waiting for Apple to expands its TV+ catalog before taking advantage of the trial offer.

In addition, getting traction for streaming services takes time. It will take time for the user base to sign up and start watching Apple TV+ shows, find the TV app on their smart TVs and streaming boxes, etcetera.

It’s also difficult to judge the validity of the report given that is mostly based on social media interactions. In combination, these factors make it hard to say whether data about viewer interest in the immediate day after the service launched are meaningful. 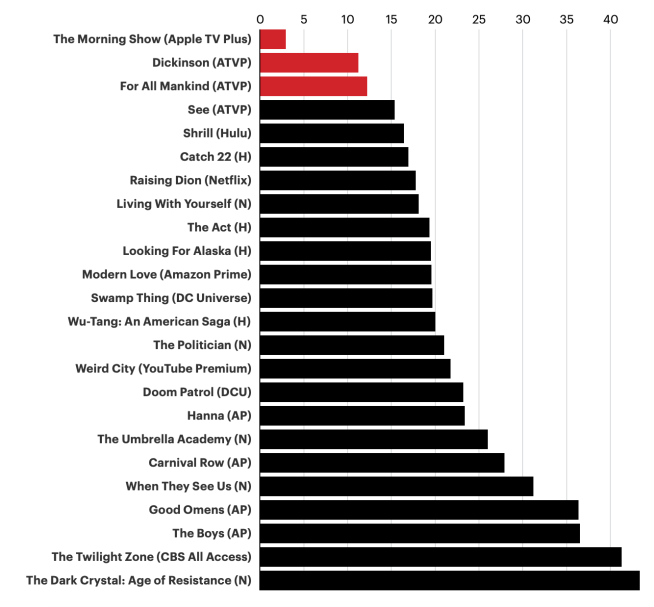 Nevertheless, Parrot’s data (via Variety) suggests that only Apple’s “See” series managed to break into the Top 20 of television audience demand as of November 2nd. “For All Mankind” and “Dickinson” followed and “The Morning Show” trailed behind with significantly smaller demand, at least according to this reporting. (It is weird that Parrot believes “The Morning Show” is so far behind the other Apple content when it has such star power and marketing budget behind it.)

“The Morning Show” demand is about twelve times smaller than the biggest bar on the chart, representing the debut period for Netflix’s “The Dark Crystal: Age of Resistance”. Two days after premiere, interest in Apple’s shows had increased by about 30%.

Apple is yet to announce official viewing figures, or performance metrics of any kind, for Apple TV+ so all we have to go on is analyst estimates like this one.

Separately, a report from Reuters says that Showtime, a subsidiary of CBS, is in active discussions with Apple about a possible bundle deal. Showtime is available through Apple TV Channels already, and it isn’t crazy to think that Apple could offer bundle pricing where you can subscribe to both Showtime and Apple TV+ together in the TV app for a reduced monthly cost compared to subscribing to both providers individually.

Many believe that Apple will eventually combine all of its services into a mega bundle a la Amazon Prime. However, it is yet to show any immediate interest in doing that. Apple is dipping its toes in the bundling world by offering Apple TV+ free to students who subscribe to Apple Music, and there are reports that Apple is discussing more Apple Music bundle ideas with music labels.

Apple TV+ launched on November 1st with 8 shows and a movie as an ‘all originals’ streaming service. The company is adding new shows and movies on a monthly basis. Check our TV+ guide to see what’s on the schedule.