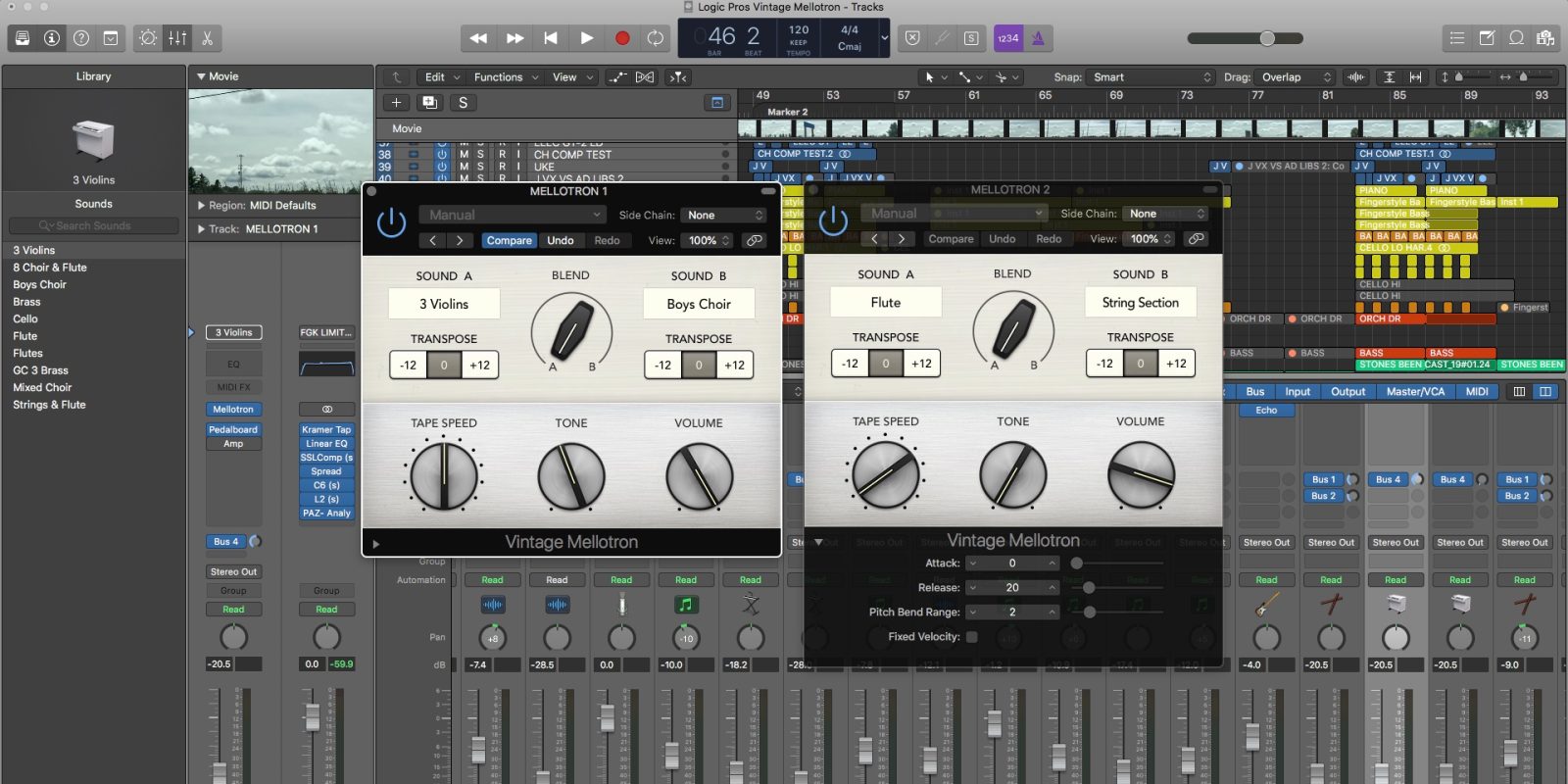 Today we are exploring Apple’s Vintage Mellotron sampler instrument from Logic Pro X. With so many brilliant third-party instruments and sound libraries out there, it can be easy to forget about Logic’s built-in gear. The retro-inspired Mellotron virtual sampler instrument is one of the most interesting libraries of sounds to get overlooked by some Logic Pro X users, and it comes completely free with the purchase of Apple’s professional DAW suite.

While staples like the EXS24 and relative newcomer Alchemy are hard to pass up — whether it be because you have 10+ years of custom instruments on tap or the shear horsepower of the former Camel Audio hybrid synth — there are some lesser known and under-appreciated options that tend to go by the wayside for no good reason. A few years back Apple introduced its Mellotron as an EXS24 patch before promoting it to standalone virtual instrument status. The retro-inspired virtual sampler instrument is one of the most interesting libraries of sounds to get overlooked by some Logic Pro X users, and it comes completely free with the purchase of Apple’s professional DAW suite.

Inspiration comes in many forms. Sometimes just understanding what an instrument library is, how it was created or where its roots were planted can come into play. Whether it’s the rickety mechanicals lurking in the background of some mad inventor’s keyboard contraption or melted cassette flourishes, quirky sounds of sometimes inexplicable origin can project visuals in our minds and become formidable influences over our creations. And while seemingly nondescript and deceivingly basic in appearance, Apple’s Vintage Mellotron is one such instrument.

Based on an electro-mechanical keyboard developed in the UK circa 1963, Vintage Mellotron is a lightweight and yet effective virtual instrument library that offers the retro vibes to LPX users for free. Within a few years the orignal was appearing on recordings like The Beatles hit “Strawberry Fields Forever” before losing the convenience battle to smaller, digital gear in the 80’s, and later making a resurgence in the virtual instrument space.

Let’s call it the spiritual precursor to what are now known as digital samplers, the original Mellotron used a series of magnetic tape heads, pressure pads and spring-loaded mechanisms to allow users to play back single sound recordings when playing a key. These days it’s as simple as dragging and dropping an audio file on a virtual interface, but back then it was a ballet of gadgets and apparatus ungracefully dancing at the touch of your fingertips. The whole thing worked like magic as far as the player was concerned, but on the inside was a brilliant mess of electro-mechanical doodads and capstans that sounded about as great as it did inconsistent.

This is where the brilliance of the machine — and more applicably its virtual counterpart — really shines for me. Even fresh off the factory line, no two orignal Mellotrons sounded quite the same. From environmental related issues (temperature, humidity, dust, smoke), to not quite pitch-perfect tape head alignment, and tape stretching, there was certainly no lack of character on these machines. Remember, every note the user is playing back on the keyboard was recorded in real time, by real players, with era-appropriate analog tape, so even the source audio is a major part of what makes both the original machine and its modern-day brethren different from your average digital sampler.

While there are certainly some worthwhile third-party Mellotron instruments out there (as well as similar vintage emulations), Logic’s built-in Vintage Mellotron is worth dusting off for another go. From 90’s era-sounding MPC loops and crushed indie walls of strings, to lush pads for your chilled out beats and haunting modern-day hip-hop melodies, Apple’s lightweight Vintage Mellotron is not to be overlooked. 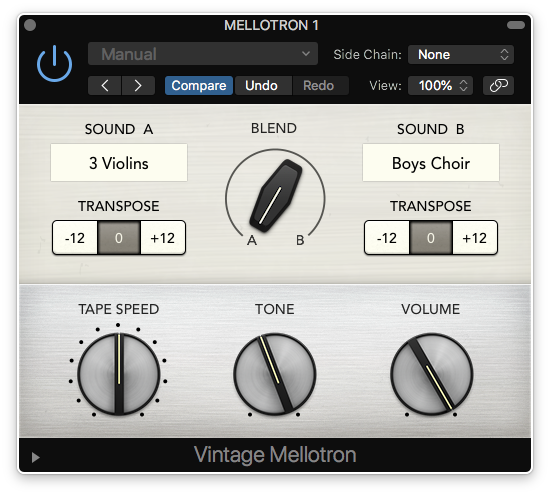 At first glance, the Vintage Mellotron might seem overly basic, but in many ways it’s actually more feature-rich than the original and sounds fantastic. According to Apple, it features “painstakingly sampled versions of each note from the original Mellotron sound library tapes,” performance quirks included. While it’ll never sound quite as romantically dirty as the platonic 1960’s setup, Vintage Mellotron sounds amazing and has now become what feels like the secret weapon everyone kind of forgot about. 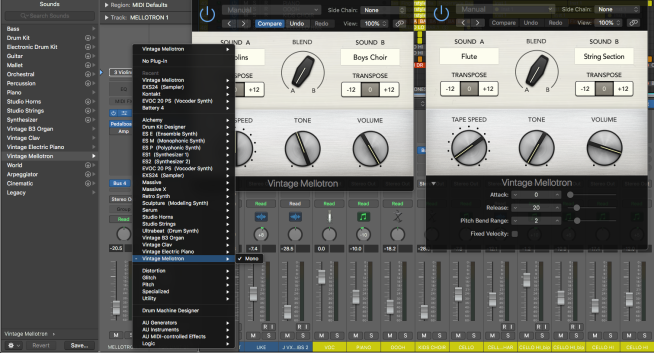 As expected, Logic Pro X’s take on the Mellotron is significantly more able in terms of sound choice, the blend there of, sample sustain length, and more. The upper section of the interface houses the Sound A and Sound B pop-up menus where you can load of up a pair of sampler instruments/sounds. The large Blend knob in the middle allows you to balance the overall output between the two selected sounds, allowing you to create custom tones in combination with the dedicated A and B side transposition controls.

Users can also access Apple’s pre-made channel strip instruments that use the Vintage Mellotron via the Library, as opposed to selecting sounds manually via the Sound A and Sound B banks mentioned above. That’s on top of some expanded controls from the pull-down menu along the bottom of the interface where you’ll find basic envelope settings and the pitch bend range: 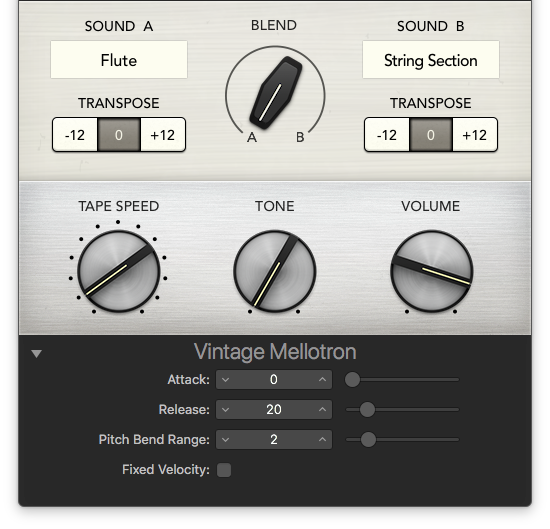 Just a careful set of choices and settings with this basic controls can provide some gorgeous source audio which can be further tweaked via the global Tape Speed and Tone controls.

The Tone knob is almost like a preset Mellotron-style filter. You want a more high-end focused sound? Go to the right. Want more of a warmer bass-heavy tone? Turn the knob to the left.

The Tape Speed has to be one of the most interesting parts of the instrument for us and where you can really draw out the vintage character. It will adjust the tape playback speed for all notes which essentially gives users a certain level of control over the aforementioned tonal fluctuations and mechanical mishaps prevalent in the 1960’s creation.

The Vintage Mellotron can be processed with any of your FX like any other instrument. But, the combination of these two controls have been very effective for retaining that Mellotron sound while allowing for custom-made patches to fit right in with the sound of a particular project. And remember, you can automate all the parameters on the Vintage Mellotron. Adding some natural movement on the Tape Speed control can really spice up an otherwise overly repetitive sounding loop, for example.

Have any interesting techniques or channel strip setups you use with Vintage Mellotron? Are you still using this thing in your productions at all? Let us know in the comments below.