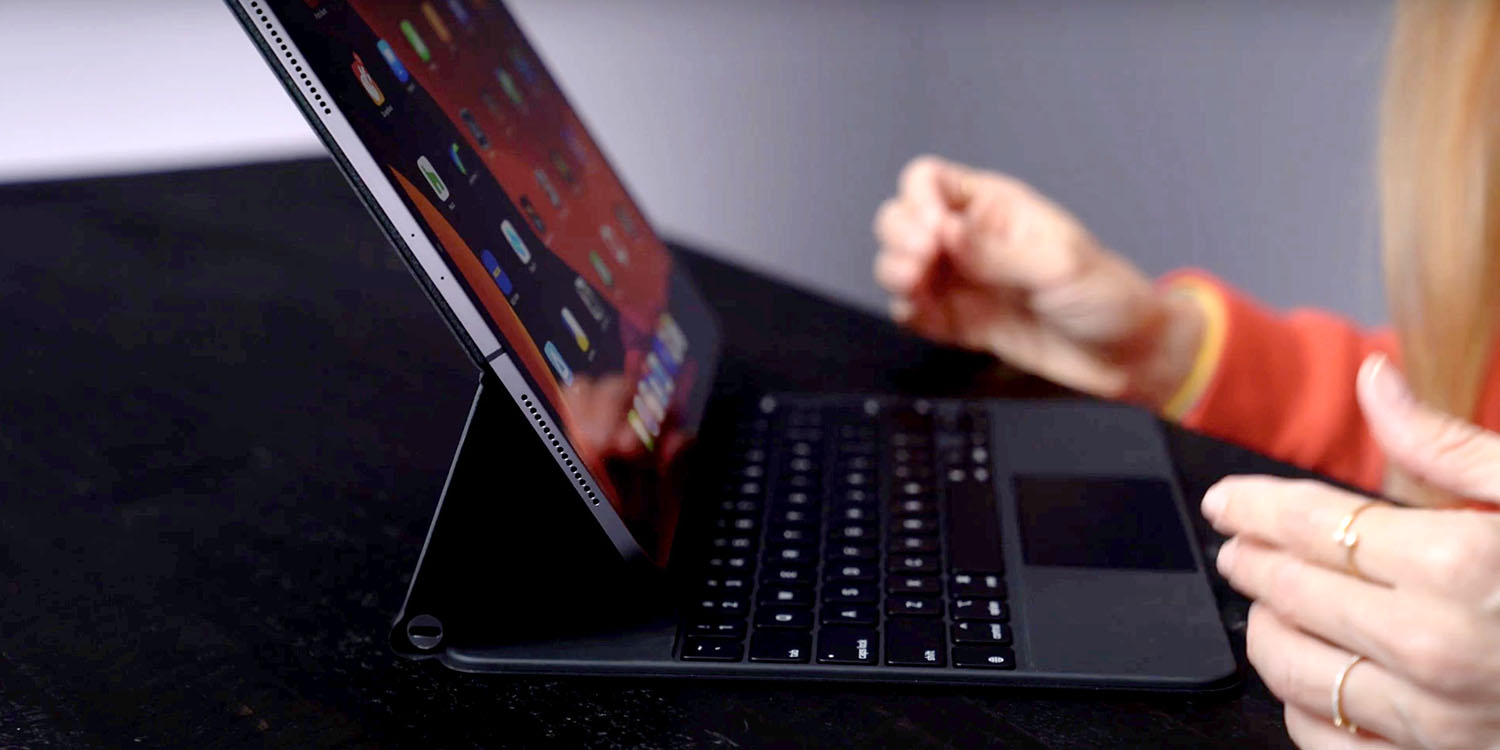 Apple’s Magic Keyboard for iPad reviews are in after the company brought an official trackpad experience to the iPad Pro for the first time.

Orders went live ahead of the expected May timeframe, and we got an early look thanks to some hands-on videos from a few people who got theirs early.

We learned this morning that the combination of the 12.9-inch iPad Pro with Magic Keyboard weighs more than a 13-inch MacBook Air – and we’re now seeing the first full reviews of the device …

Engadget says the keyboard finally turns the iPad into a proper computer.

The Magic Keyboard might not be my ideal solution, and it’s pricey compared to some of the third-party options. But its technical elegance and the fact it draws inspiration from Apple’s much-improved MacBook keyboards, make this the best all-around option for being productive on your iPad Pro […]

The iPad Pro is a phenomenal tablet, and with a Magic Keyboard attached, it’s finally starting to feel like a proper computer. Typing on it feels excellent. The trackpad is a star. The whole thing is sturdy, elegant and surprisingly practical. If money is no issue, or if you’re just willing to splurge, the Magic Keyboard is the gold standard of iPad keyboards.

My gripe is that I want just a little bit more from the Magic Keyboard. It’s not quite as physically flexible as I had hoped, and the nerd in me can’t help but wish I could plug accessories into the keyboard’s USB port. These limitations won’t matter to everyone though, and people who just care about getting work done on an iPad needn’t worry — they’ll still find a lot to enjoy here.

TechCrunch found it a huge leap in usability for the iPad Pro, and over the Smart Keyboard Folio.

The new Magic Keyboard is as different from that device as the new MacBook Pro keyboards are from the low profile ones that dominated headlines over the last couple of years. It’s a huge jump forward in usability for the iPad Pro — and for last year’s model too […]

The Magic Keyboard offers a lovely, backlit deck that holds its own against the 16” MacBook Pro and the new MacBook Air for best portable keyboards. The key travel is excellent — in between the two laptops in my opinion — and the feel is tight, responsive and precise. This is a first class typing experience, full stop […]

For typing, [the range of possible] positions should be just fine for the vast majority of users. And the solid (very high friction) hinge means that the whole thing is very sturdy feeling, even with more moving parts. I have been quite comfortable grabbing the whole assembly of the 12.9” iPad Pro plus Magic Keyboard by the deck of the keyboard and carrying it around, much in the way I’d carry a laptop. No worries about accidental floppiness or detachment […]

It’s also a laptop-class trackpad, proving that Apple’s engineering teams still have a better idea about how to make a trackpad that works crisply and as expected than any other hardware team out there […]

If you work seriously with the iPad and that work is based on typing, the Magic Keyboard is essentially mandatory. It’s the dream keyboard for all of us who found ourselves crossing the Rubicon into iPad as primary computer over the past couple of years. It’s not without its caveats, but it is a refreshingly straightforward and well executed accessory that makes even older iPads feel like better laptops than laptops.

The Verge thinks it’s all about the trackpad, but the keyboard doesn’t compare well with the Microsoft Surface.

The trackpad is good. That’s really the TL;DR of it. It is fairly small, of course, and if you’re used to the capacious trackpads on MacBooks, it will probably feel absolutely tiny. On the 12.9-inch unit I am reviewing, it’s almost exactly the same size as the trackpad on my Surface Pro — so it felt familiar to me, at least.

But the Magic Keyboard’s trackpad is better than the Surface’s because it lets you click anywhere on the trackpad, not just in the middle or at the bottom. It’s also smooth, accurate, and there’s zero lag on iPadOS.

Trackpad support on iPadOS is great, by the way […], but trackpad support on a bunch of third-party apps is absolutely not. Any app that doesn’t use Apple’s standard APIs for creating buttons or text views feels off-kilter with the trackpad. Stuff you can swipe with your finger can’t be swiped with the trackpad, text selection can be a fiasco, and the cursor doesn’t always do its neat shape-shifting tricks. Google’s apps are particularly guilty here, but they’re far from the only ones […]

For all its faults, the Microsoft Surface feels like it was designed from the start to have a detachable keyboard. The iPad does not — and not even the very good Magic Keyboard can change that.

iJustine says this new setup has already replaced her MacBook much of the time.

For all of the normal things I’d be using my laptop for around the house, I have not even touched it at all [since I got the Magic Keyboard].

The floating screen looks so good […] What I like so much about this, and I honestly don’t know why it took Apple so long to make this kind of a case, is I can easily adjust [the screen angle] without having to move my iPad […]

The keyboard honestly feels just like the new MacBooks […]

It has enhanced the entire experience [of using an iPad].

Our poll found that a huge percentage of you are planning to buy the Magic Keyboard over other trackpad options. We’ll of course be bringing you our own Magic Keyboard for iPad reviews. Zac says that it seems on paper to tick all the boxes for him, and I’ll be discussing my own expectations in an iPad Pro Diary update.

What about you? Have the reviews influenced your own plans? Let us know in the comments.