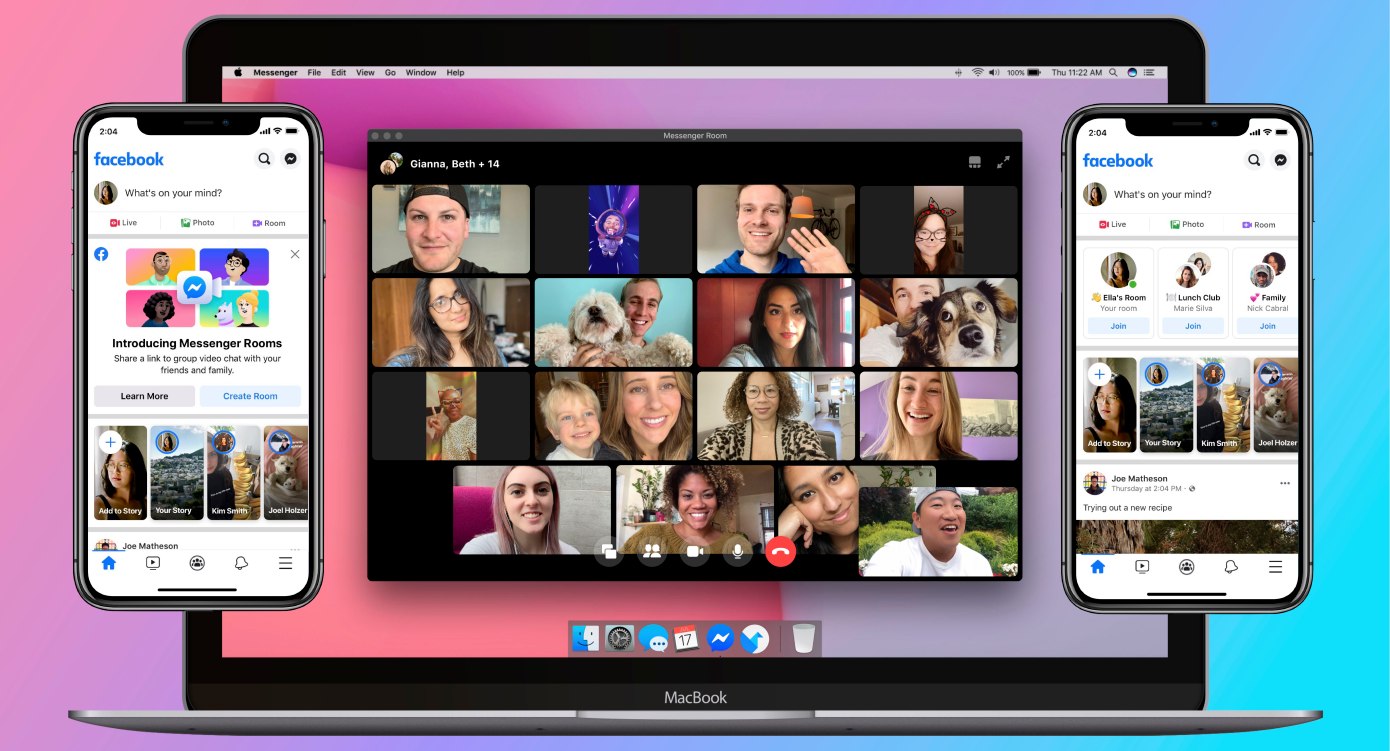 Facebook is out today with a new product to connect multiple people via video chat and compete with popular offerings like Zoom, Group FaceTime, Skype, Houseparty, and more.

Detailed by TechCrunch, Facebook announced a number of messaging updates today with the biggest news being the ability to start a group video chat with Messengers Rooms feature.

Launching today on mobile and desktop, you can start a video chat Room that friends can discover via a new section above the News Feed or notifications Facebook will automatically send to your closest pals. You can also just invite specific friends, or share a link anyone can use to join your Room.

For now, the feature is quite limited compared to Zoom and even Group FaceTime. However, that will expand over time and true to its vision of merging messaging, Rooms will arrive for Instagram, WhatsApp, and Portal in the future.

For now, up to 8 people can join, but that limit will rise to 50 within weeks, making it a more legitimate alternative to Zoom for big happy hours and such. And more importantly, users will soon be able to create and join Rooms through Instagram, WhatsApp, and Portal, plus join them from the web without an account, making this Facebook’s first truly interoperable product.

Look out for the pop-alert the next time you launch Facebook on your iPhone, iPad, or on the web to start a video chat with Messenger Rooms. Facebook has launched Messenger Rooms in “a few countries” however it hasn’t said which ones those are for now before a global rollout of the new feature.

Messenger Rooms will hold up to 50 people with no time limit so you can drop in and spend time with friends, family and people who share your interests. You can discover Rooms from your Facebook friends, Groups and Events at the top of News Feed. pic.twitter.com/Fmx2VPjmMX

The Verge notes that Messenger Rooms are not encrypted like Group FaceTime calls or even WhatsApp video calls.

Room calls are not end-to-end encrypted, but Facebook says it does not view or listen to calls. The creator of a room can remove participants at any time, and rooms where illicit behavior is taking place can be reported to Facebook. (WhatsApp video calls are end-to-end encrypted, offering an extra layer of protection to users.)

TechCrunch summarized the other messaging updates from Facebook unveiled today: