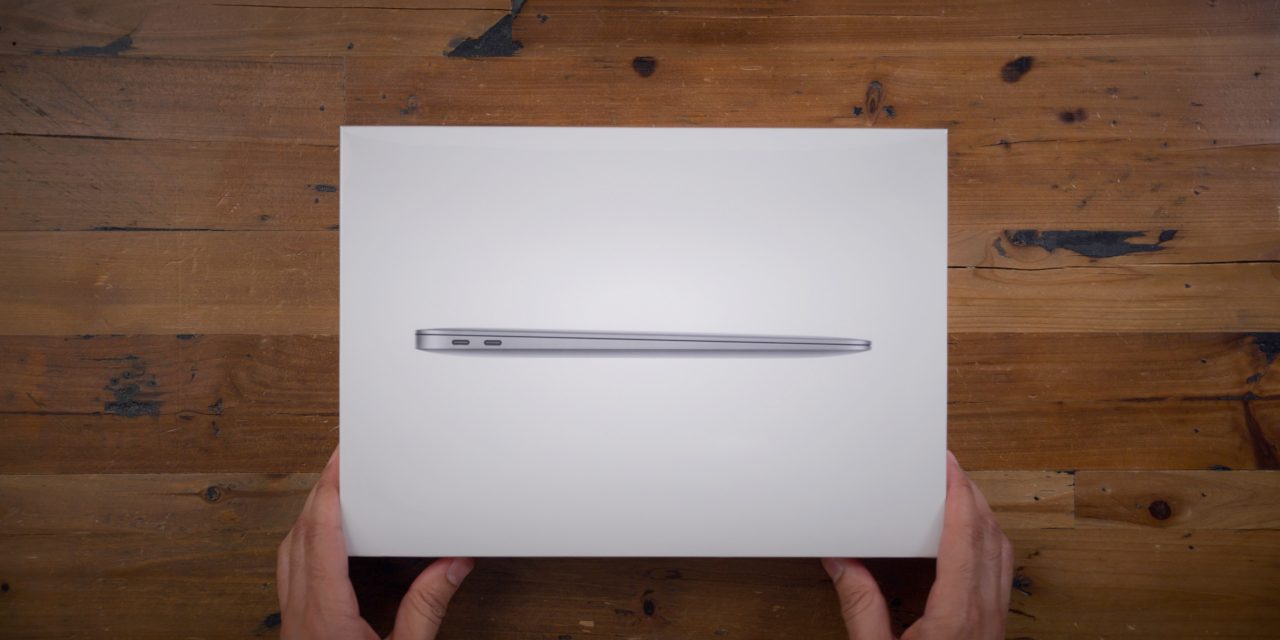 As I noted in my initial hands-on impressions with the $999 MacBook Air, this base model MacBook Air is a good option for Mac users in search of a no-frills laptop experience. If you’re the type who primarily uses a laptop for everyday tasks like web browsing, writing, spreadsheets, and other things of that ilk, then the MacBook Air is more than capable of handling such needs.

Should you consider the 2020 MacBook Air? Should you upgrade if you’re coming from one of the last two updates? Watch our hands-on video walkthrough for the details.

As I mentioned during our MacBook Air 2020 top features overview, I opted for the base model $999 configuration, simply because I was interested to try the cheapest laptop that Apple sells. The base configuration comes with the following specs, but you can upgrade the RAM, SSD, and even the CPU if your budget allows for it.

Special thanks to Intego for sponsoring 9to5Mac: Get 50% off Intego’s Mac Internet Security X9

Although no-frills, the 2020 MacBook Air is a well-built machine. The aluminum unibody chassis with the teardrop design remains just as attractive and functional as it’s ever been. 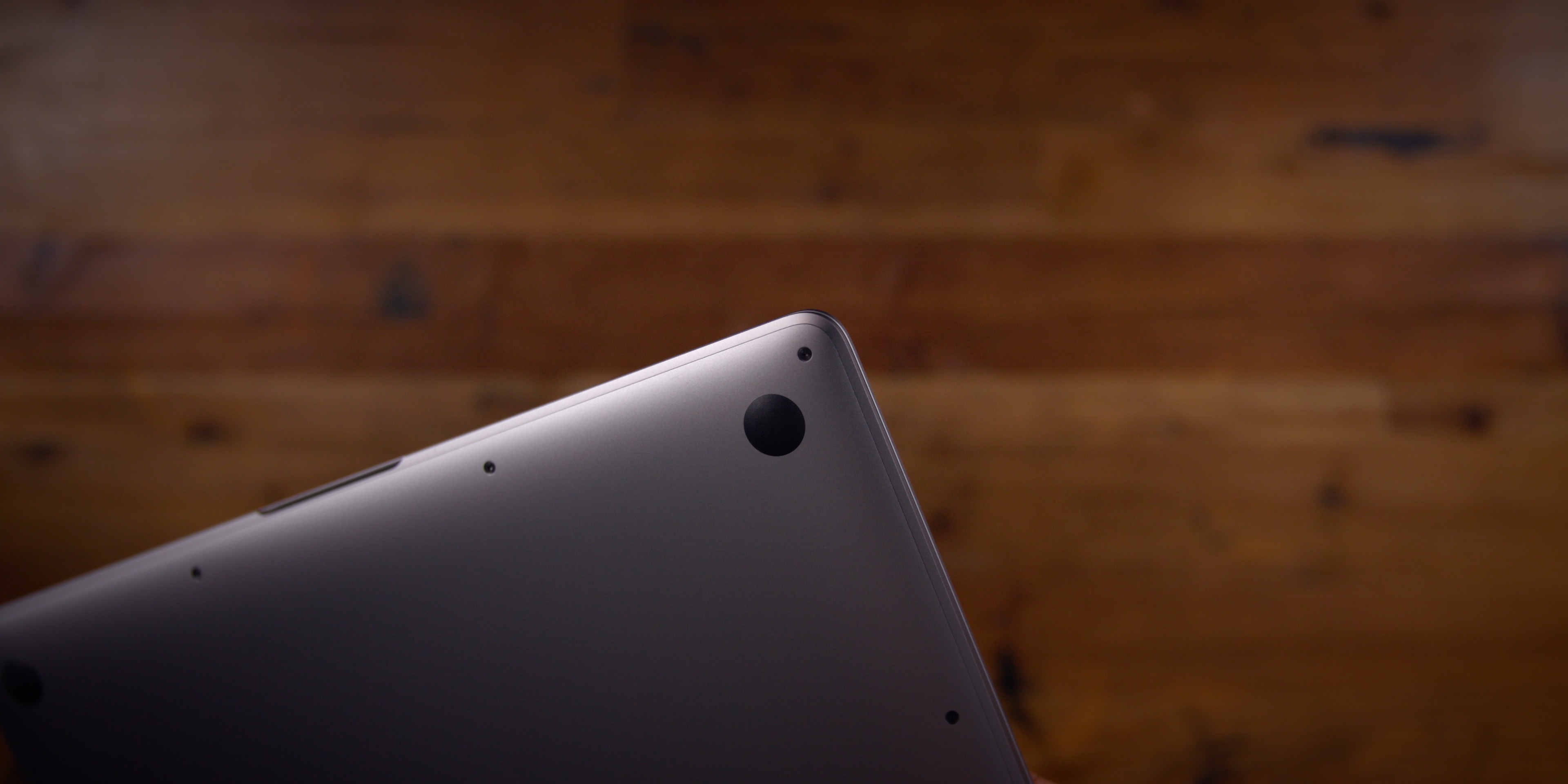 The display on the MacBook Air, while not enjoying key benefits such as P3-wide color support found on the MacBook Pro, still looks great. It features less brightness than the MacBook Pro (400 nits vs 500 nits), but unless you’re in bright sunlight, it should be adequate enough for most situations.

To avoid sounding like a broken record, I’m going to resist making the majority of this review about the updated keyboard, but that’s hard to do given how big of a change the keyboard is when compared to the previous two MacBook Air releases. 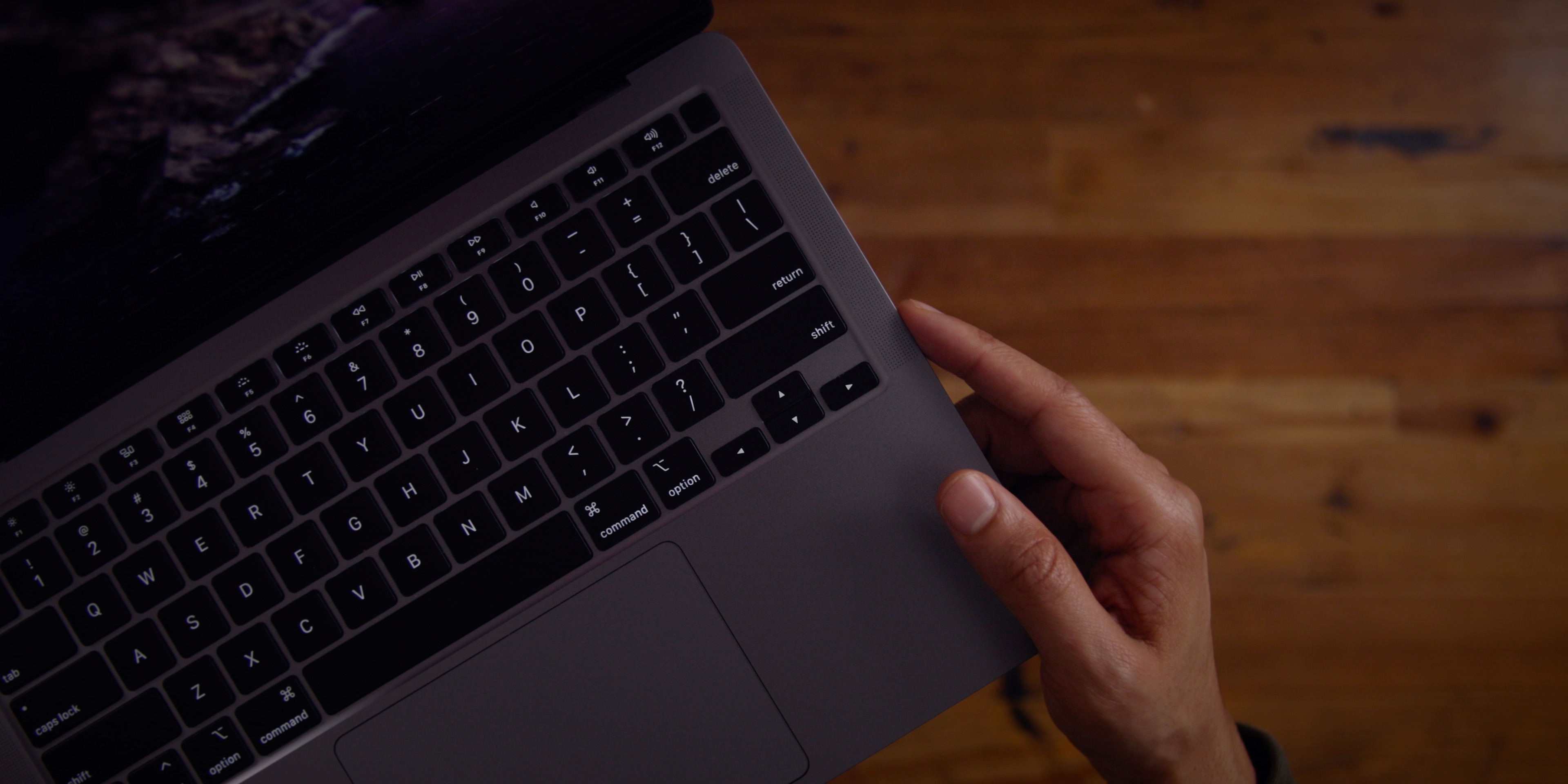 The keyboard, which adopts a scissor switch design with more perceived key travel and generous spacing, makes the typing experience feel much improved. This is accentuated by Apple’s willingness to include fan-favorite features like the inverted-T arrow keys and a hardware escape key. Granted, the MacBook Air has always had a hardware escape key, because it’s never been weighed down by the Touch Bar, an unnecessary feature that’s present on every current MacBook Pro model. 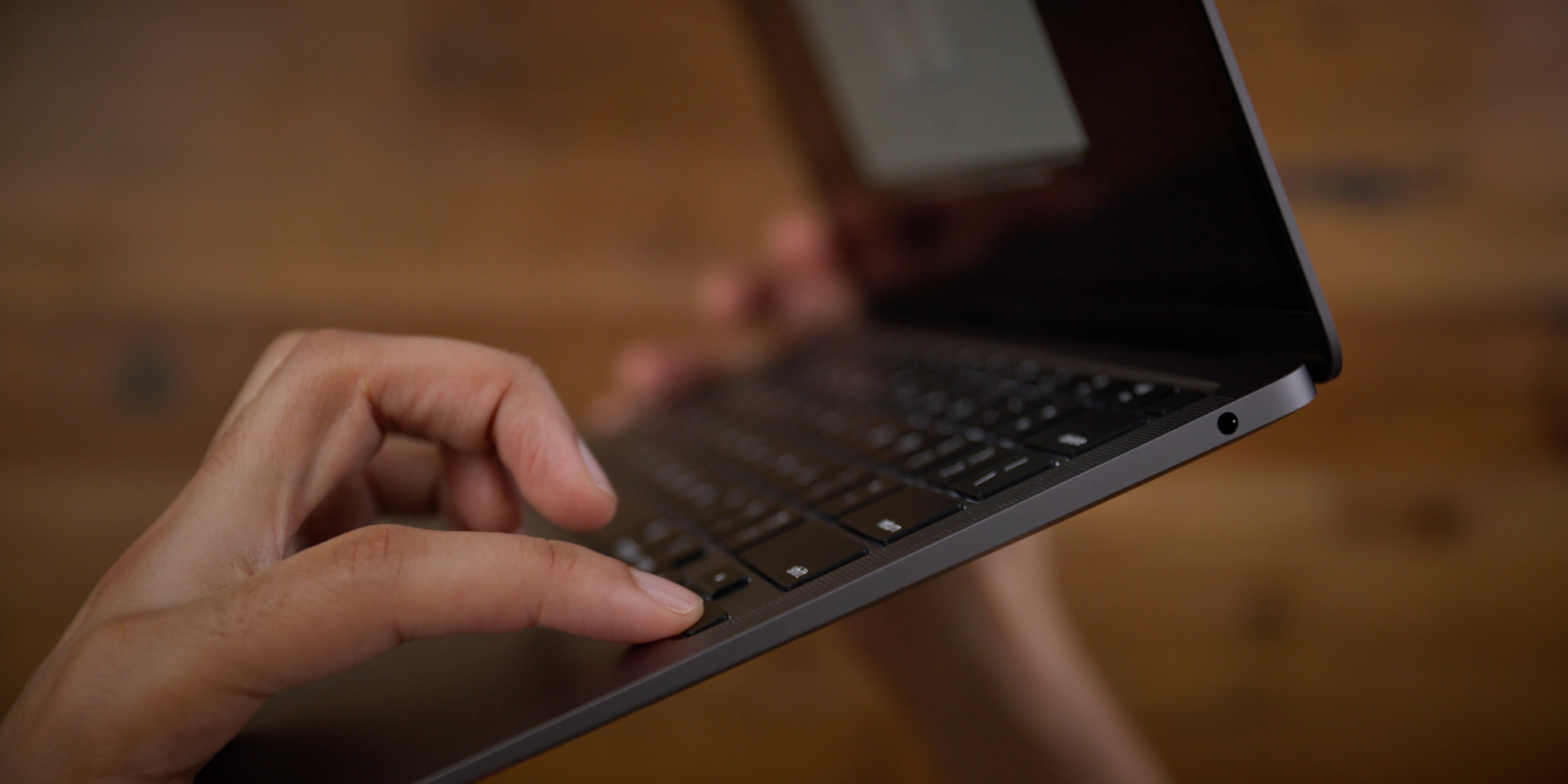 If you’ve been hesitant about buying an Apple laptop because of the bad things you’ve heard or experienced with the previous butterfly keyboard, then there’s no longer a need to worry. In fact, after Monday’s update to the 13-inch MacBook Pro, Apple no longer sells the butterfly keyboard on any of its laptops.

But besides the keyboard, there are other physical design details that matter as well. For example, the inclusion of two Thunderbolt 3 ports on the left side of the MacBook Air facilitates both charging and external expansion capability. 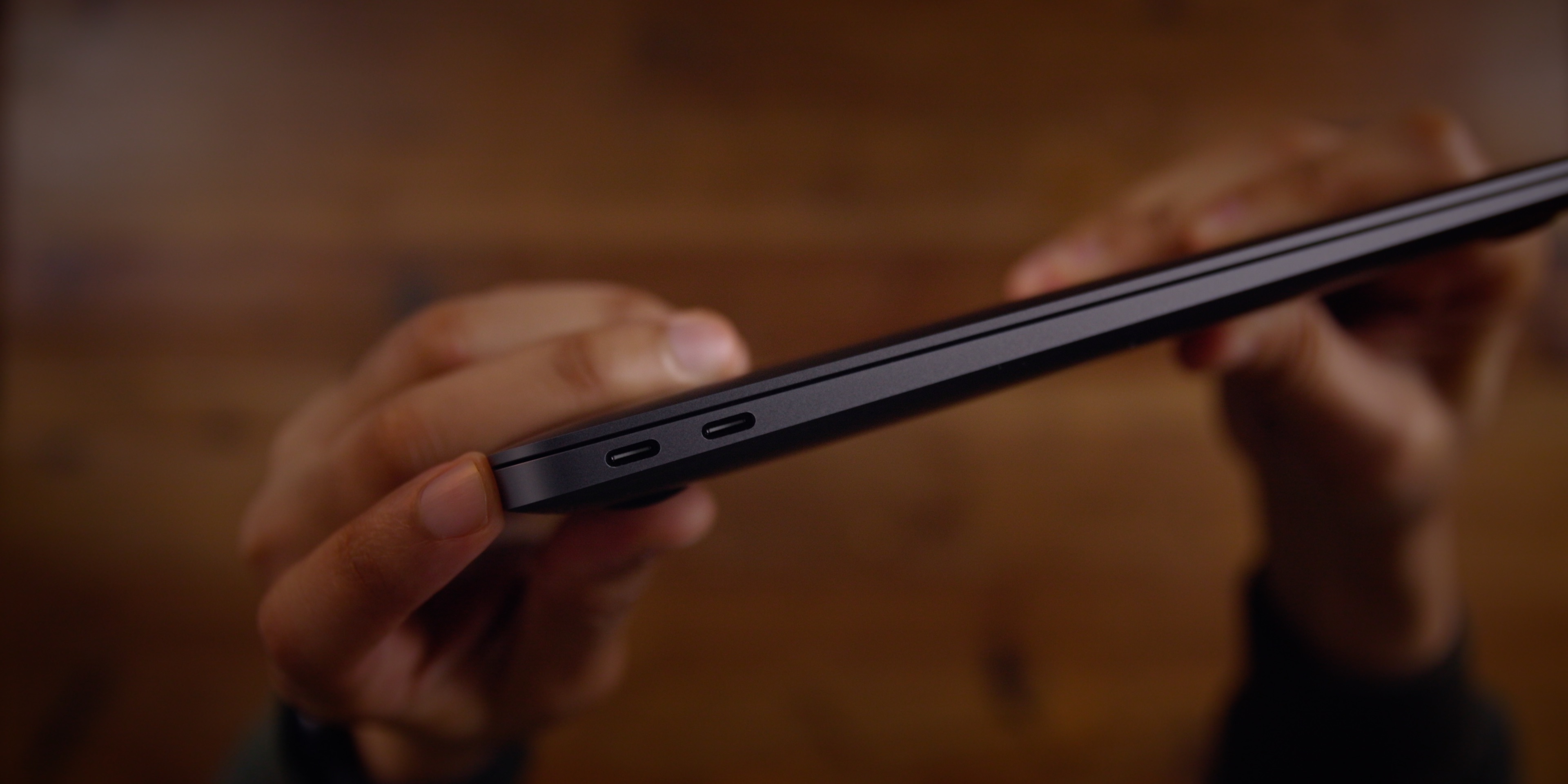 As I’ve waxed about before, Thunderbolt 3 is perhaps one of the most useful ports in the recent history of computer I/O. Not only does it handle recharging your MacBook Air, but it also handles display output along with PCIe SSDs, audio interfaces, even GPUs. In other words, there is no shortage of handy Thunderbolt 3 peripherals available to connect to, and I’ve already covered a few of my favorites in a previous post and video. 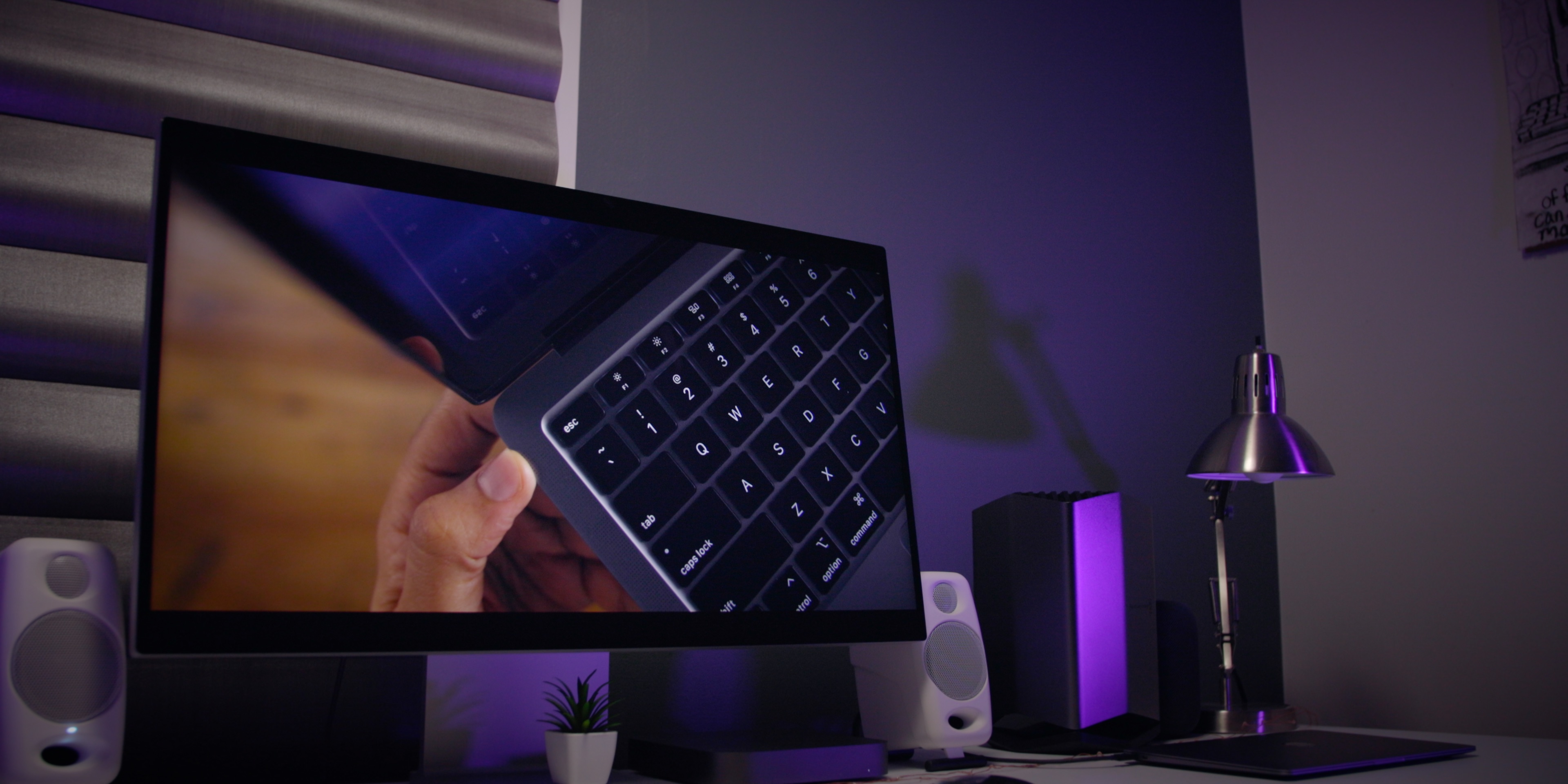 If you’re a Pro Display XDR user, one of the most important characteristics of Intel’s 10th-generation CPUs is the inclusion of updated Iris Plus Graphics. Intel’s integrated GPU is now capable of driving Apple’s high-end display at full 6K resolution. With the release of the new 13-inch MacBook Pro, every MacBook in Apple’s lineup is now capable of running the Pro Display XDR at its highest resolution (except for the lower-priced 2020 13-inch MacBook Pro models with 8th gen Intel chips).

I guess the consensus here is that, from a build and design perspective, the MacBook Air isn’t spectacular in any one area. But it’s a highly functional machine for everyday computing, and the small and lightweight form factor makes it an ideal travel companion.

As you may expect, the biggest question mark going into this review of the MacBook Air has to do with performance. Being that I opted for the $999 version, the only 2020 MacBook Air model that comes with a dual-core CPU instead of a quad-core CPU, I didn’t expect to be blown away by the machine’s performance. 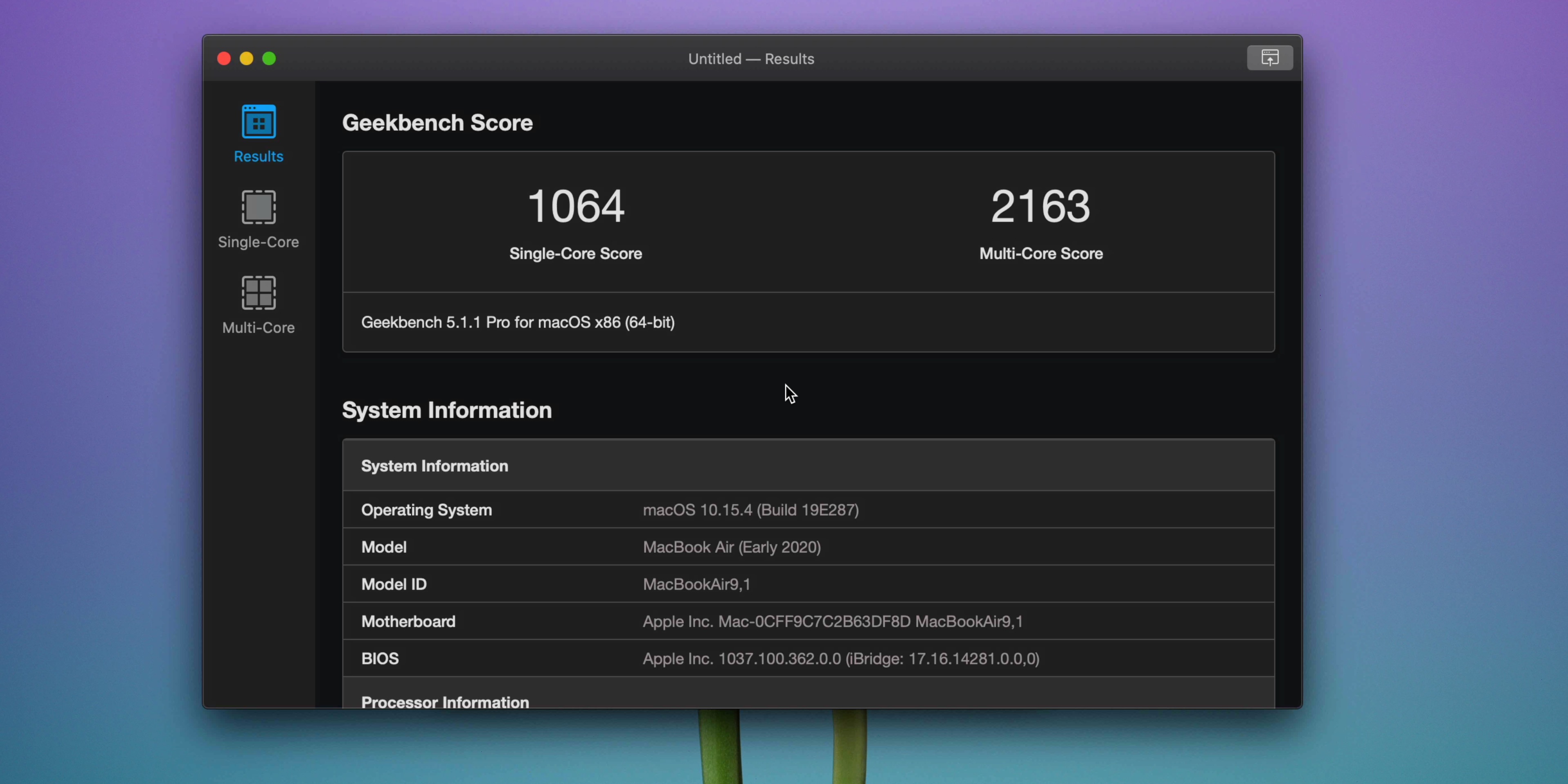 My expectations were largely confirmed after putting the 2020 MacBook Air to the test. It should go without saying, but this is not the machine that you’ll want to use for intense video rendering, editing, exporting, etc. For editing simple videos shot on your iPhone it’ll be fine, but for complex work in apps like Final Cut Pro X, where you’re pushing color correction, adding effects, and using plugins, this is not the machine you’ll want to use.

But again, this should come as no surprise, as this computer obviously wasn’t designed with such workflows in mind. Of course, in a pinch, you can technically edit high-quality videos in the aforementioned scenarios, but it’s not something you’re going to wish to be subjected to on a regular basis. 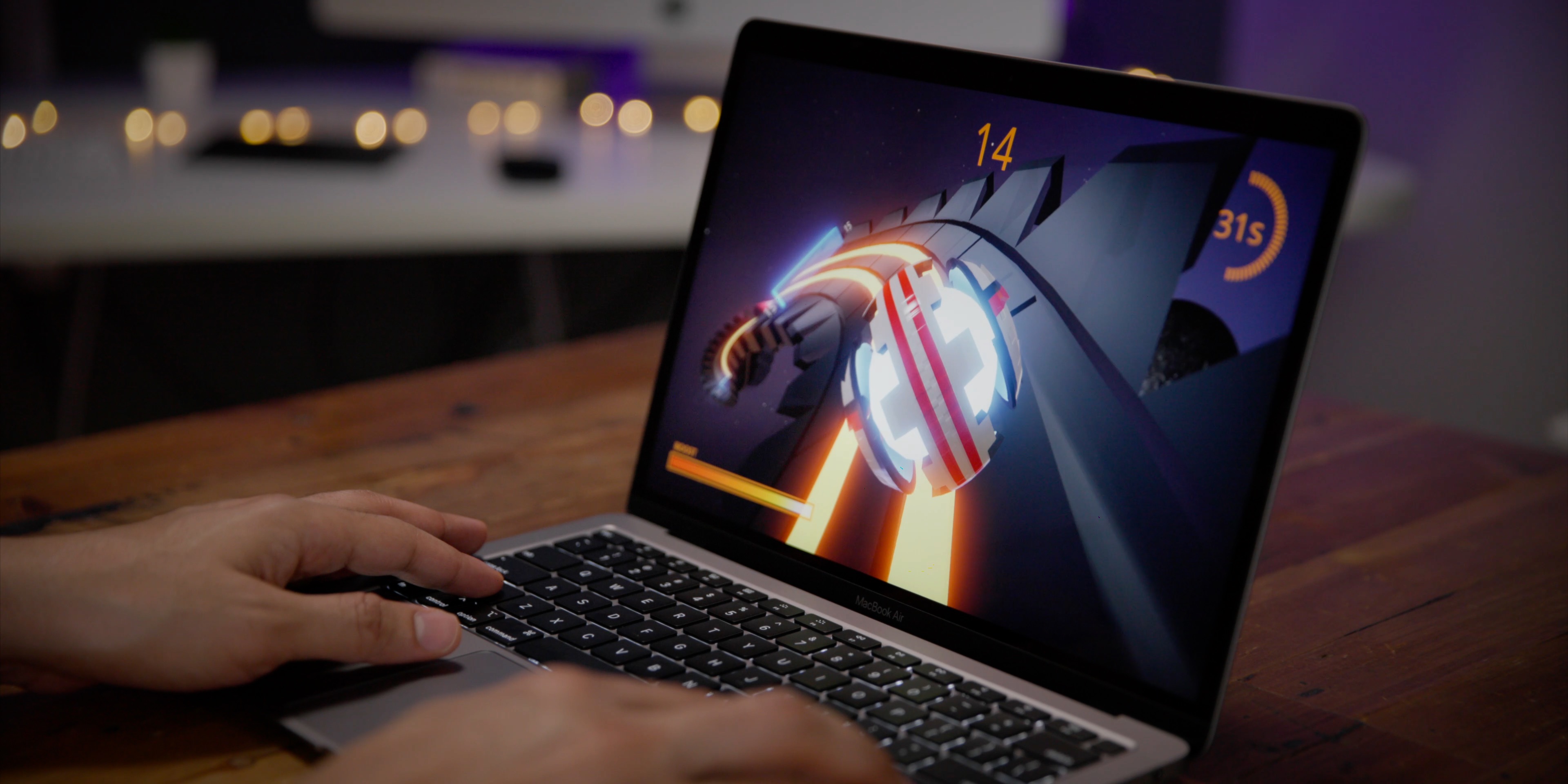 If you know you’re going to be engaging in more intense activities on a more regular basis, then you should at least consider upgrading to the quad-care Intel i5 CPU, and 16GB of RAM. Both of these additions will help considerably when it comes to editing high-quality 4K videos.

The CPU upgrade will especially come in handy when running apps that take advantage of multi-core. It’s not going to perform as well as higher-end MacBook Pro models, but just for $100 more, the CPU upgrade is a no-brainer if you know you’re going to use the MacBook Air for more than just basic tasks. 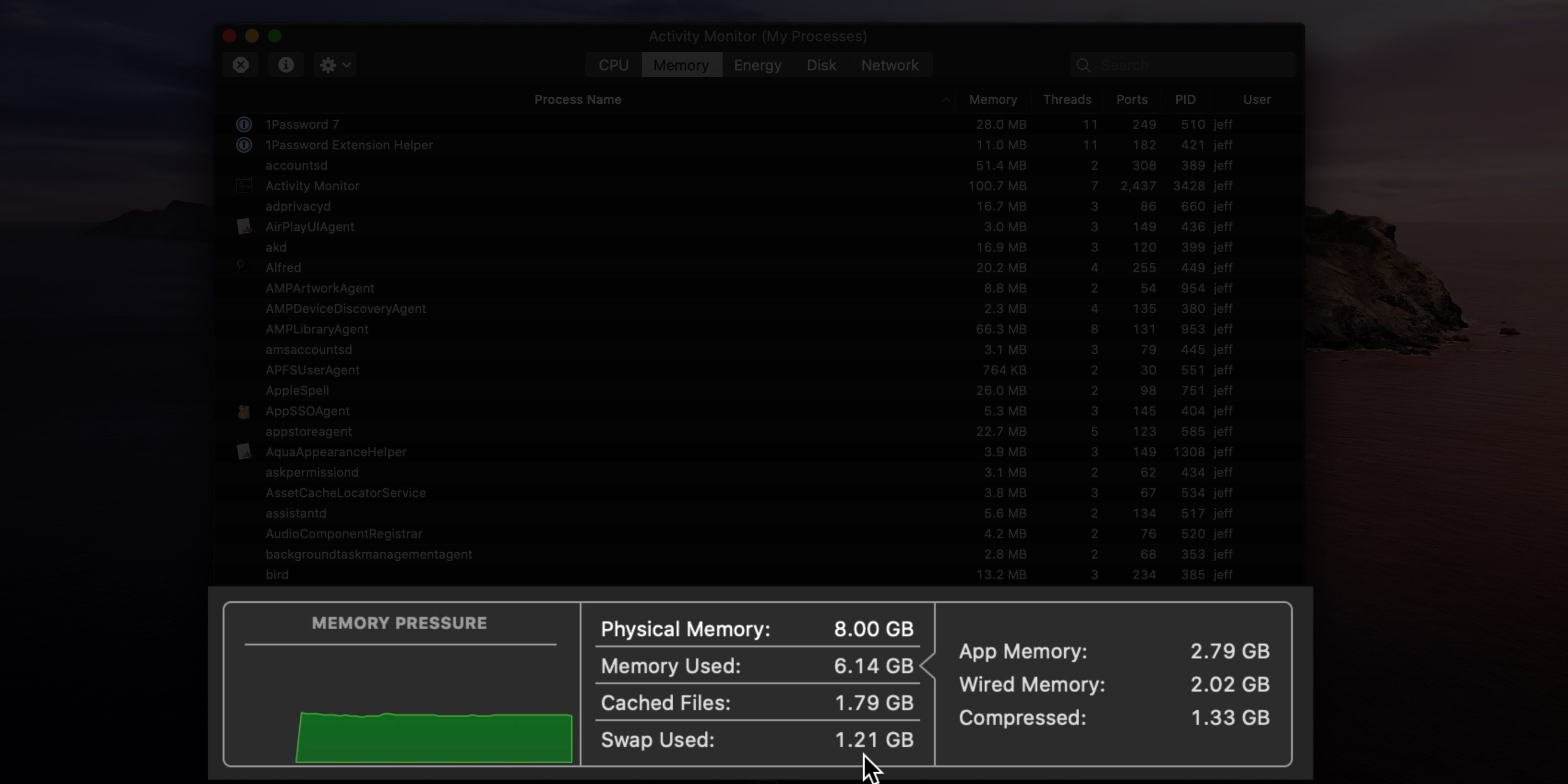 For everything else, though — browsing the web, typing out research papers in Pages, creating spreadsheets in Numbers, and even playing most Apple Arcade games — this dual-core MacBook Air performs well. And for those times when you need extra GPU power, or a larger and/or faster SSD, there’s always Thunderbolt 3 expandability that will allow you to do just that.

The question of iPad…

Herein lies the issue with recommending a basic Apple computer like the $999 MacBook Air. If you’re just doing basic work, then why not opt for an iPad Pro? Depending on your needs, you may still prefer a traditional desktop computer with a traditional desktop operating system like macOS, but much will depend on the types of apps you regularly use, and how you typically use a computer. 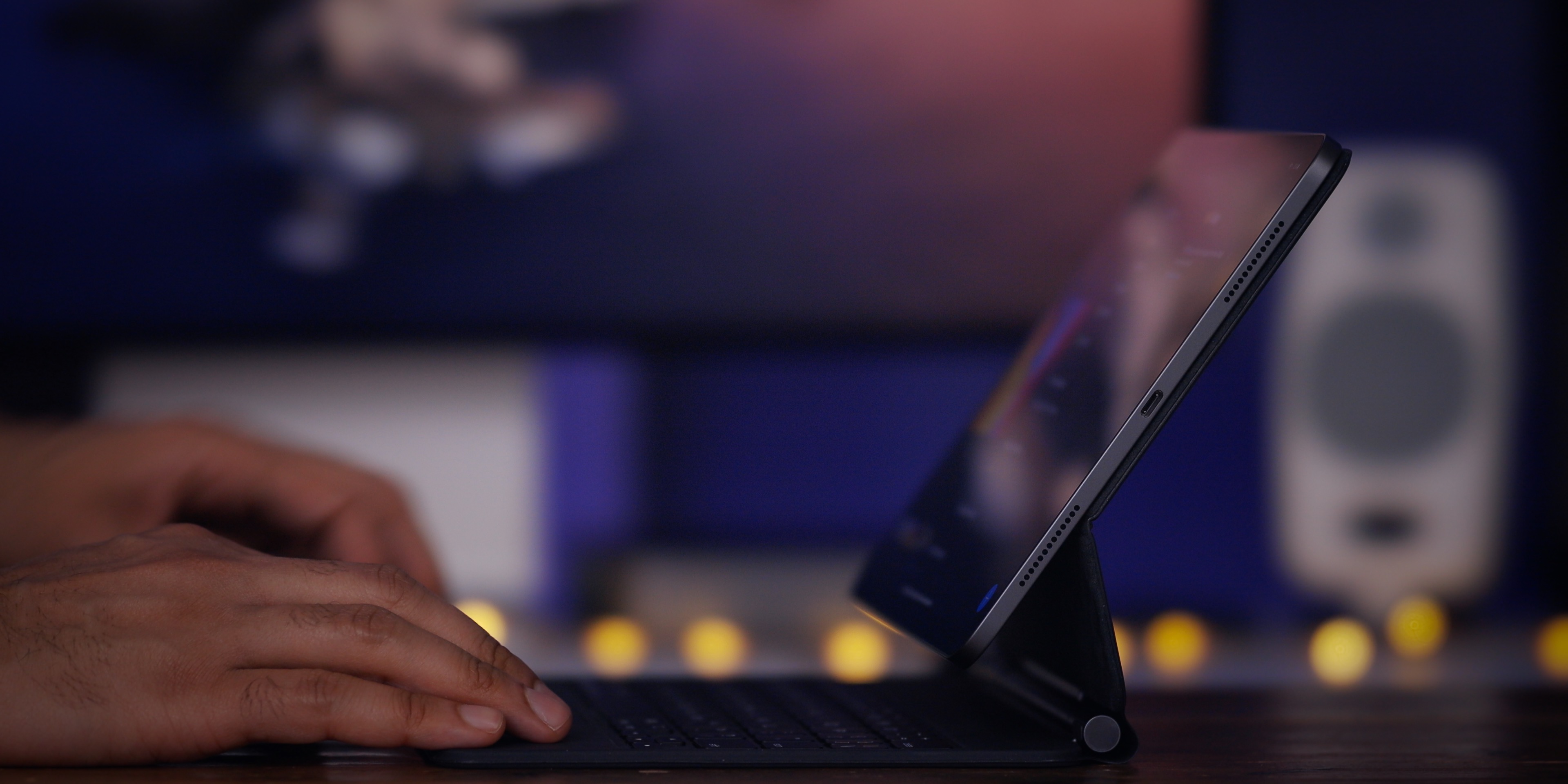 In other words, do you need full-featured multi-window support? Are there apps that you use that aren’t offered on iPadOS? Do you ever need to run Windows whether via a virtual instance or via Boot Camp? If you answered yes to those questions, it will make more sense to stick to a traditional laptop like the MacBook Air.

But for more casual usage — browsing the web, researching, writing, etc. — I’d pick the iPad Pro + Magic Keyboard in most instances. After all, the iPad Pro is like having two machines in one — a really great tablet, and a solid, albeit somewhat limited, laptop computer.

The problem with such a recommendation is that even the smaller 11-inch iPad Pro + Magic Keyboard costs more than the entry model 2020 MacBook Air, so it’s not a decision that you’ll want to make solely based on cost. 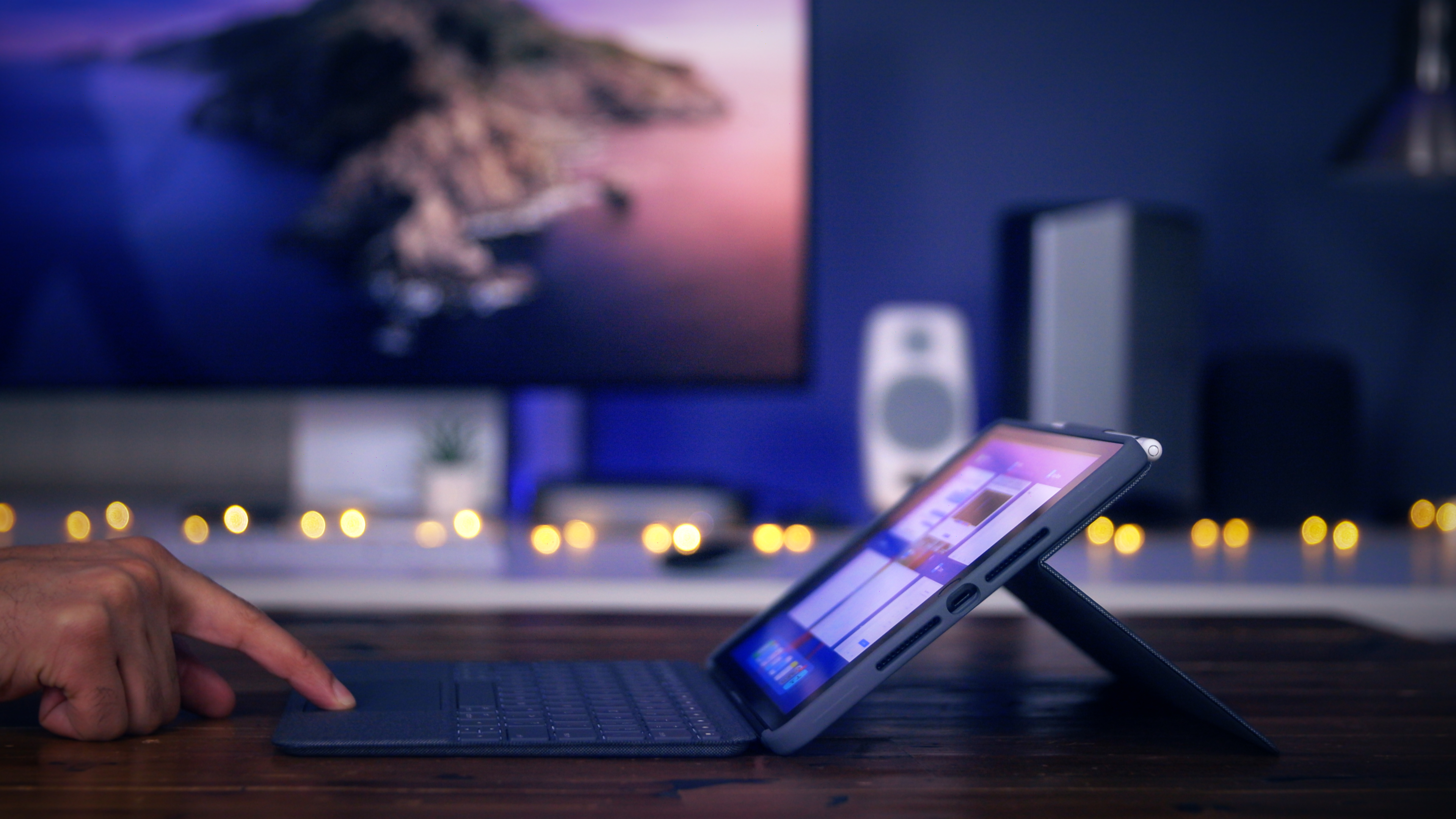 With this in mind, you may also want to consider the $329 entry-level iPad when paired with something like Logitech’s Combo Touch Keyboard case. Since all eligible iPads now get mouse/trackpad support, virtually any model can perform well as a laptop, although in limited fashion when compared to the MacBook Air.

I tend to buy Macs that are well-equipped, with a healthy amount of storage, the fastest processors, plenty of RAM, etc. But this time I wanted to venture towards the opposite end of the spectrum, and give the entry-level $999 model a shot. 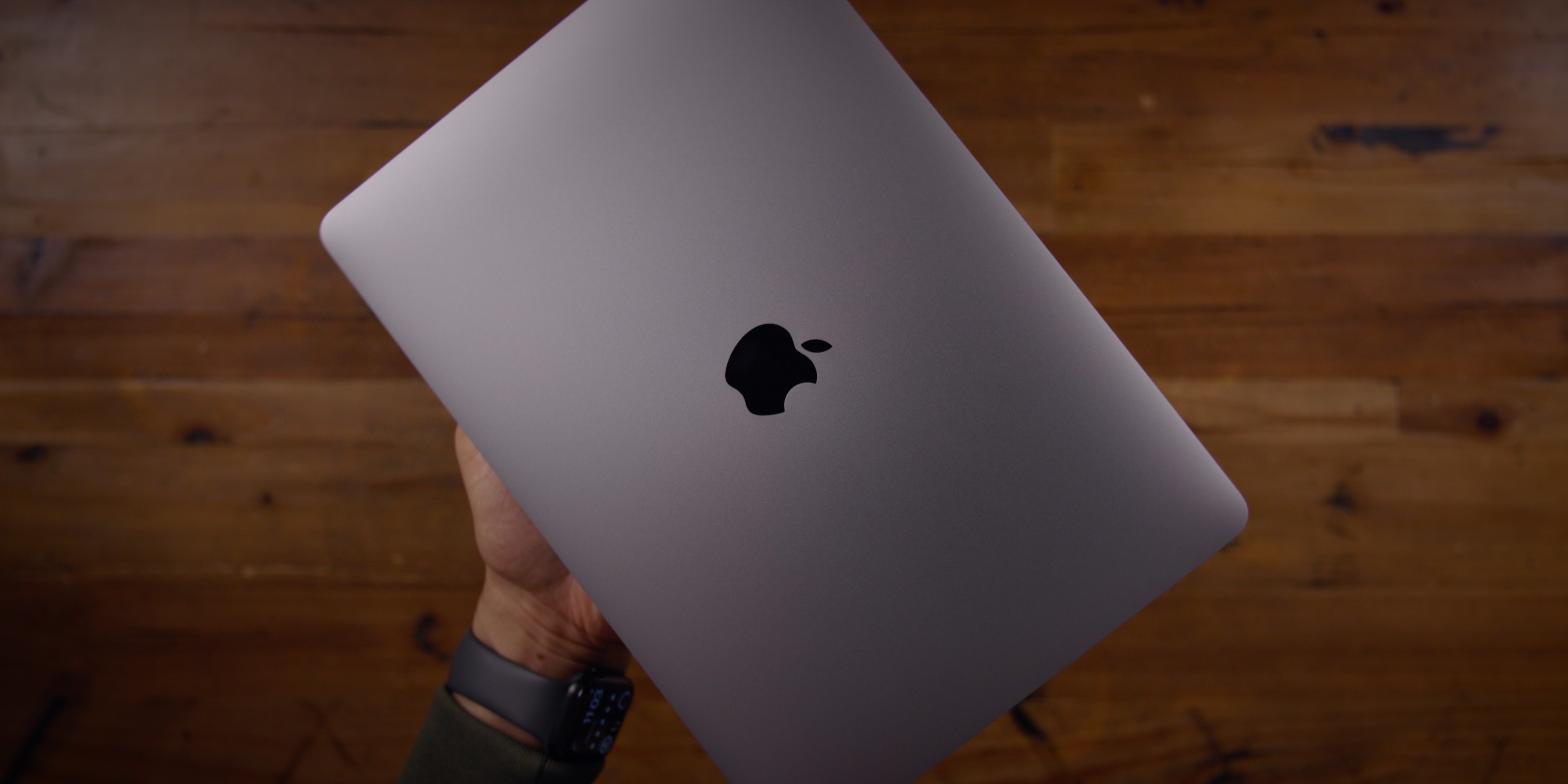 The 2020 entry-level MacBook Air is a decent performer, uber-portable, and features tried and true design and build quality. It even features expandability via Thunderbolt 3 that lets you eke out more performance, and connect to all sorts of peripherals, including Apple’s Pro Display XDR, via high speed I/O. 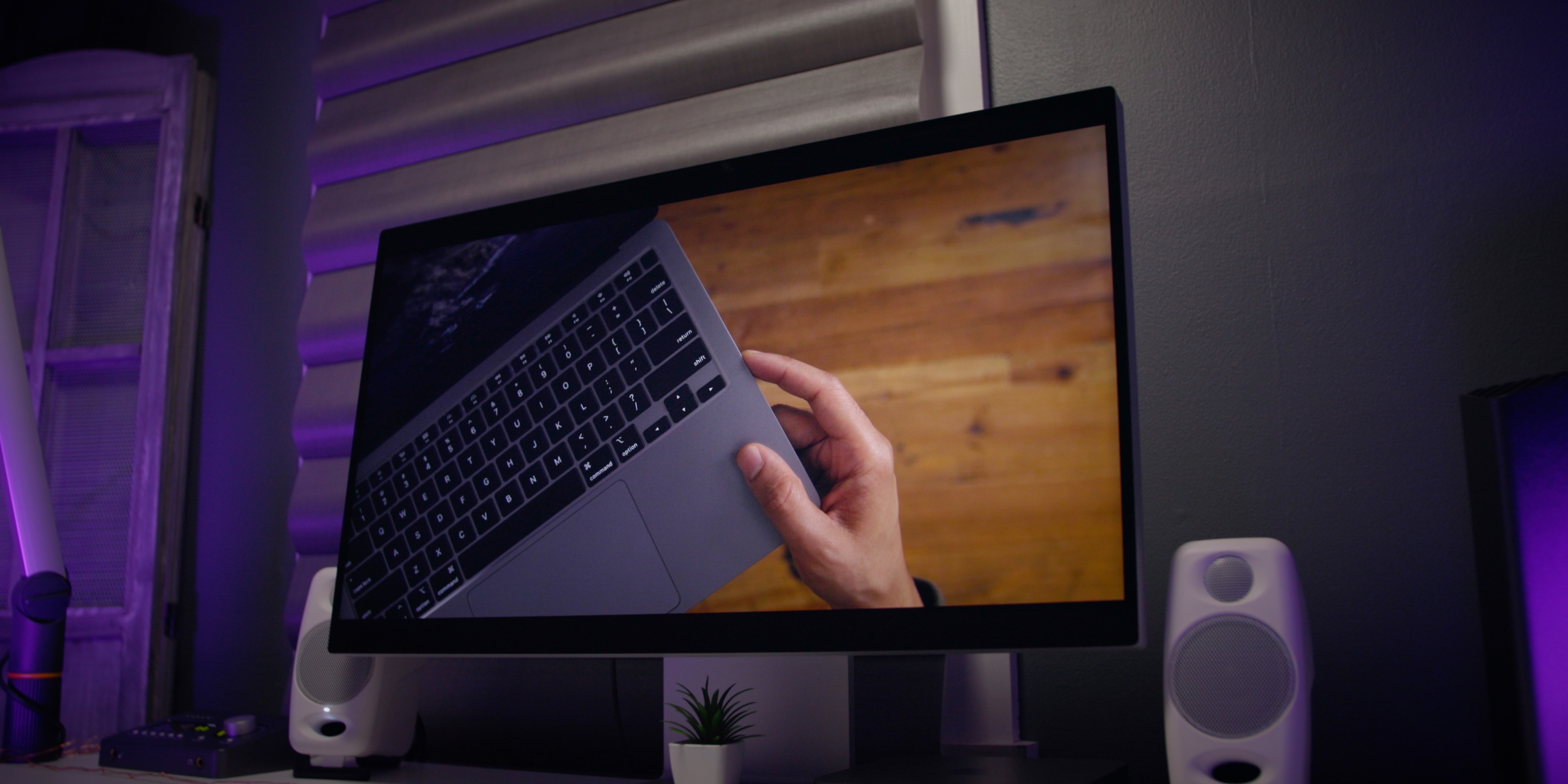 In the end, what I found was a machine that performed largely as expected. The MacBook Air gives you the full macOS experience that you can take with you on the go for just $999. Regardless of the build-to-order configuration you decide on, the MacBook Air is the machine that most casual users looking for a “traditional” desktop computer should consider. 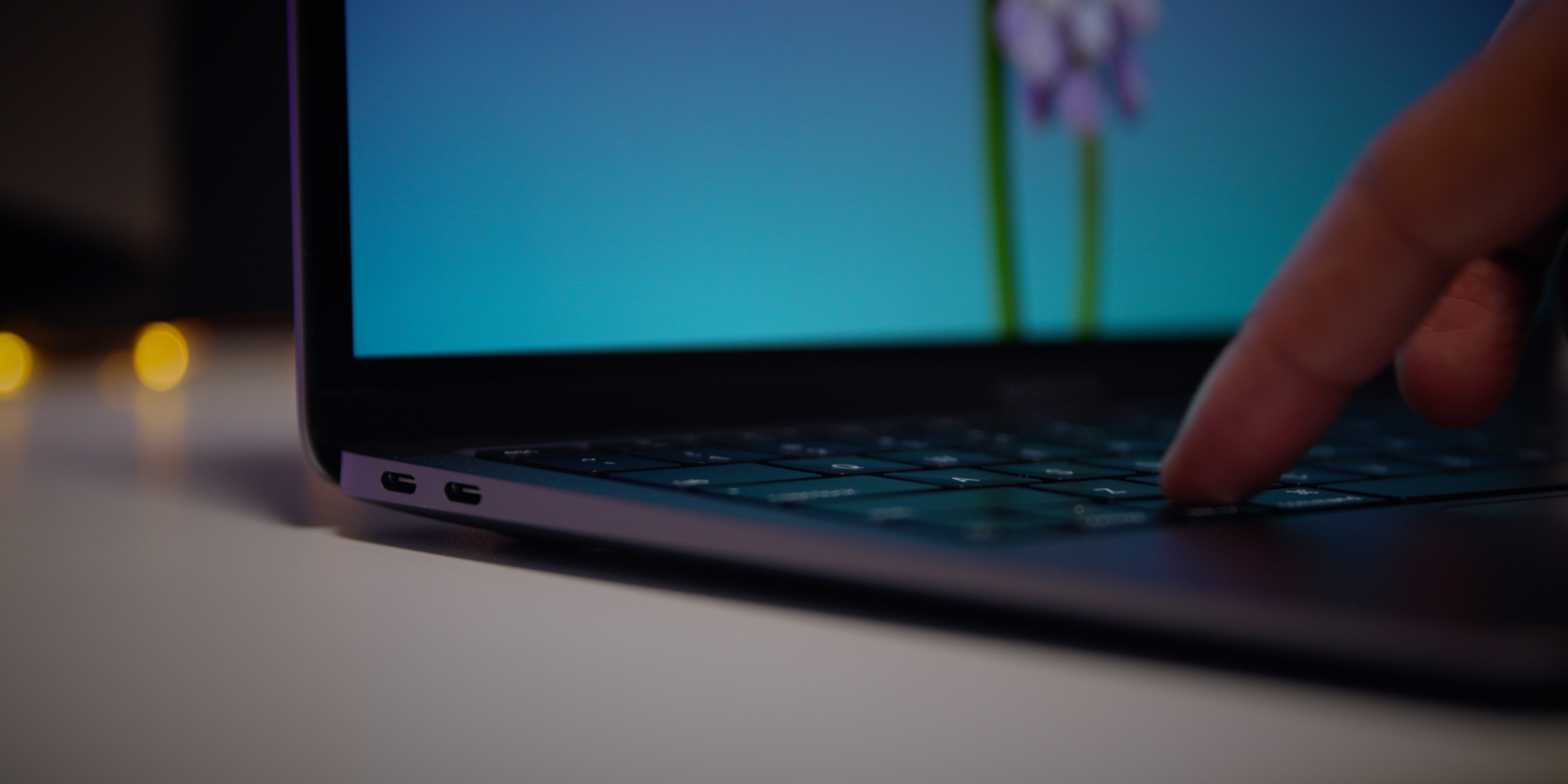 The MacBook Air is about as vanilla as it gets when it comes to Apple products. From a marketing standpoint, it’s probably the most “boring” machine that Apple makes. But boring isn’t a bad thing when it comes to needing a reliable traditional laptop that just works. That’s largely what you can expect from the 2020 MacBook Air.

What do you think? Would you consider the MacBook Air as your main computer? Sound off in the comments with your thoughts.