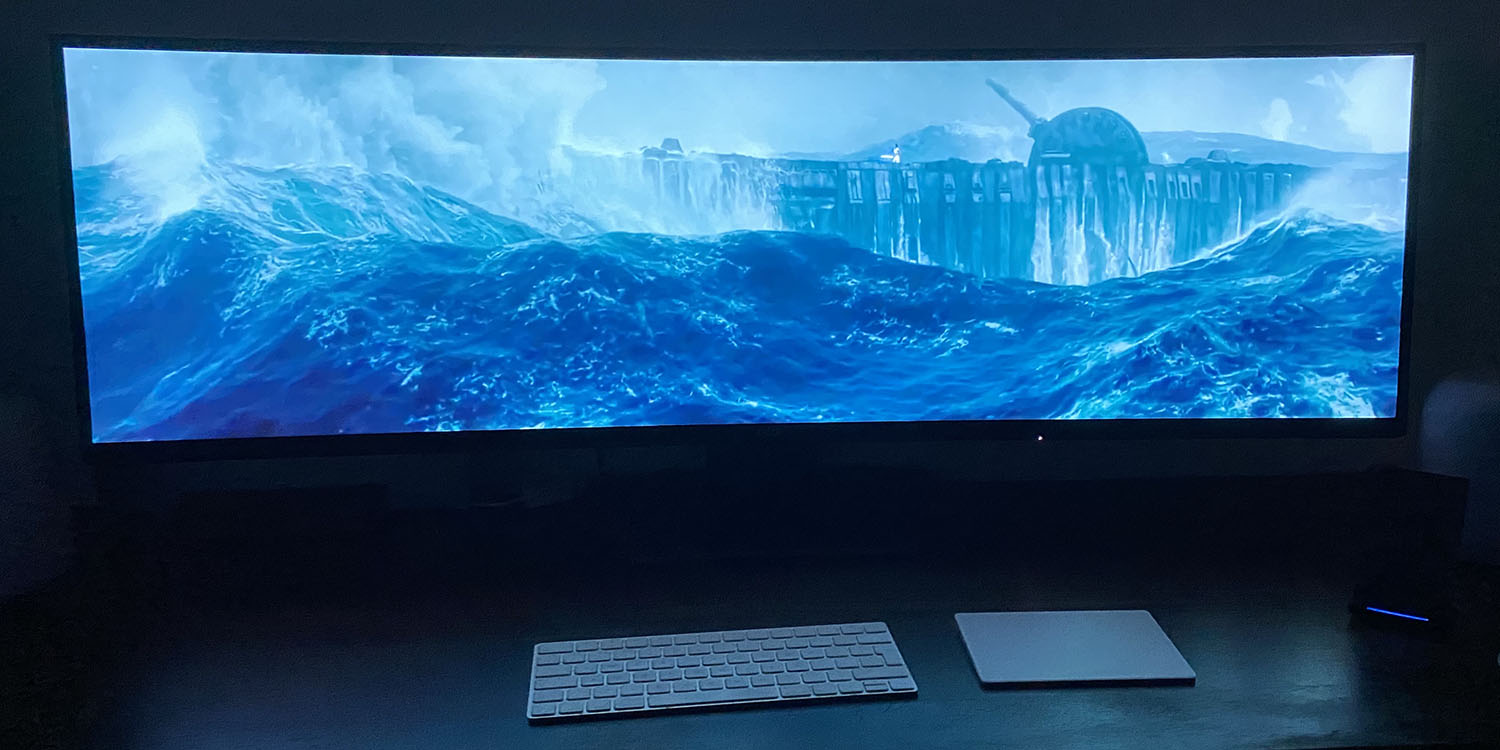 My ‘first impressions‘ piece yesterday was rather longer than I expected, so I don’t yet have much to add – but while my Dell UltraSharp 49 photos don’t show it well, the monitor makes a pretty decent movie screen.

No prizes for guessing the first search I tried on YouTube …

I mean, you have to, right?

There aren’t many of them, but there are a few, and they look absolutely spectacular!

My girlfriend had mostly just rolled her eyes at the monitor prior to this, but when I suggested she came and took a look at this, she was immediately making plans to move a couple of chairs into the office for movie night.

As I say, photos really don’t do the image quality justice, as the combination of moving images and low-light means the captures are rather compromised, but here’s a couple more anyway to at least give a sense. 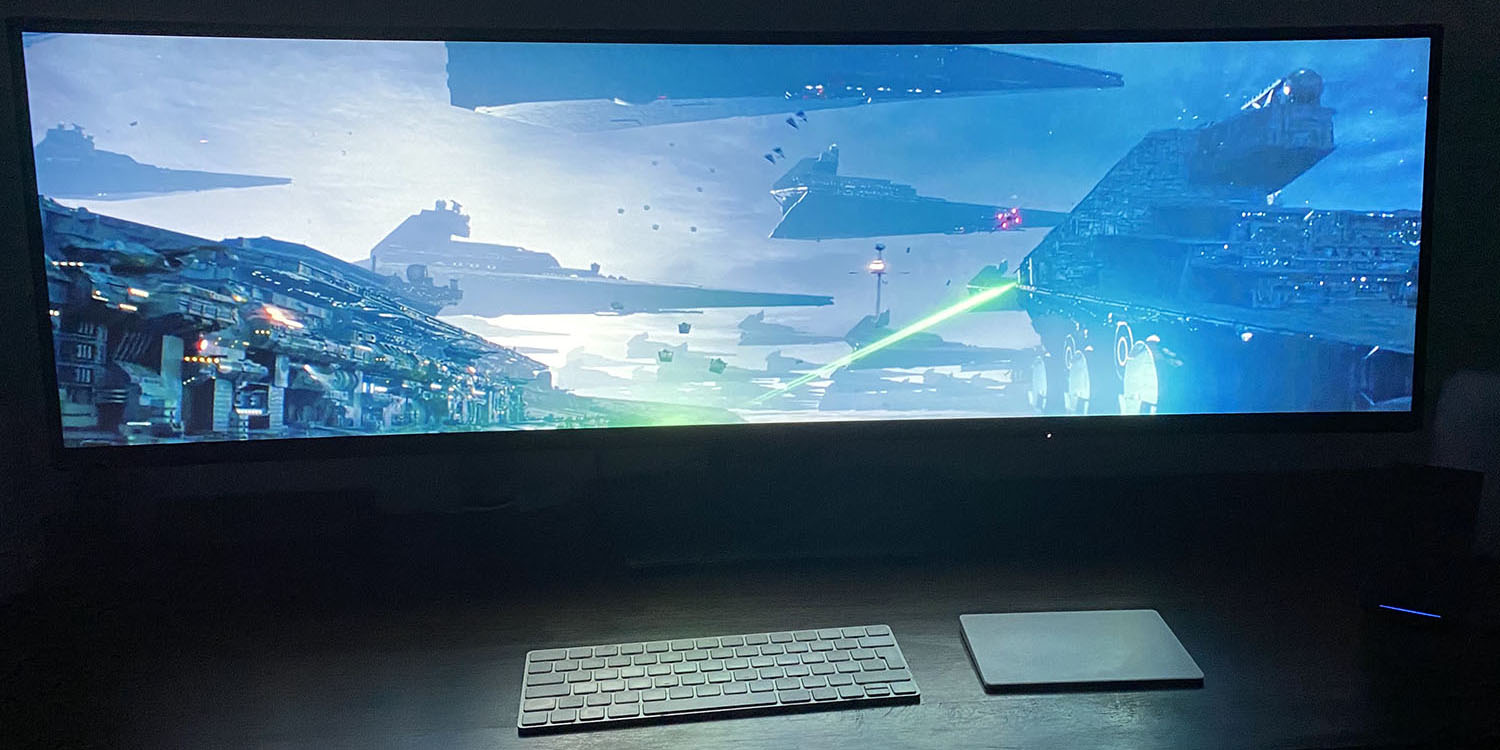 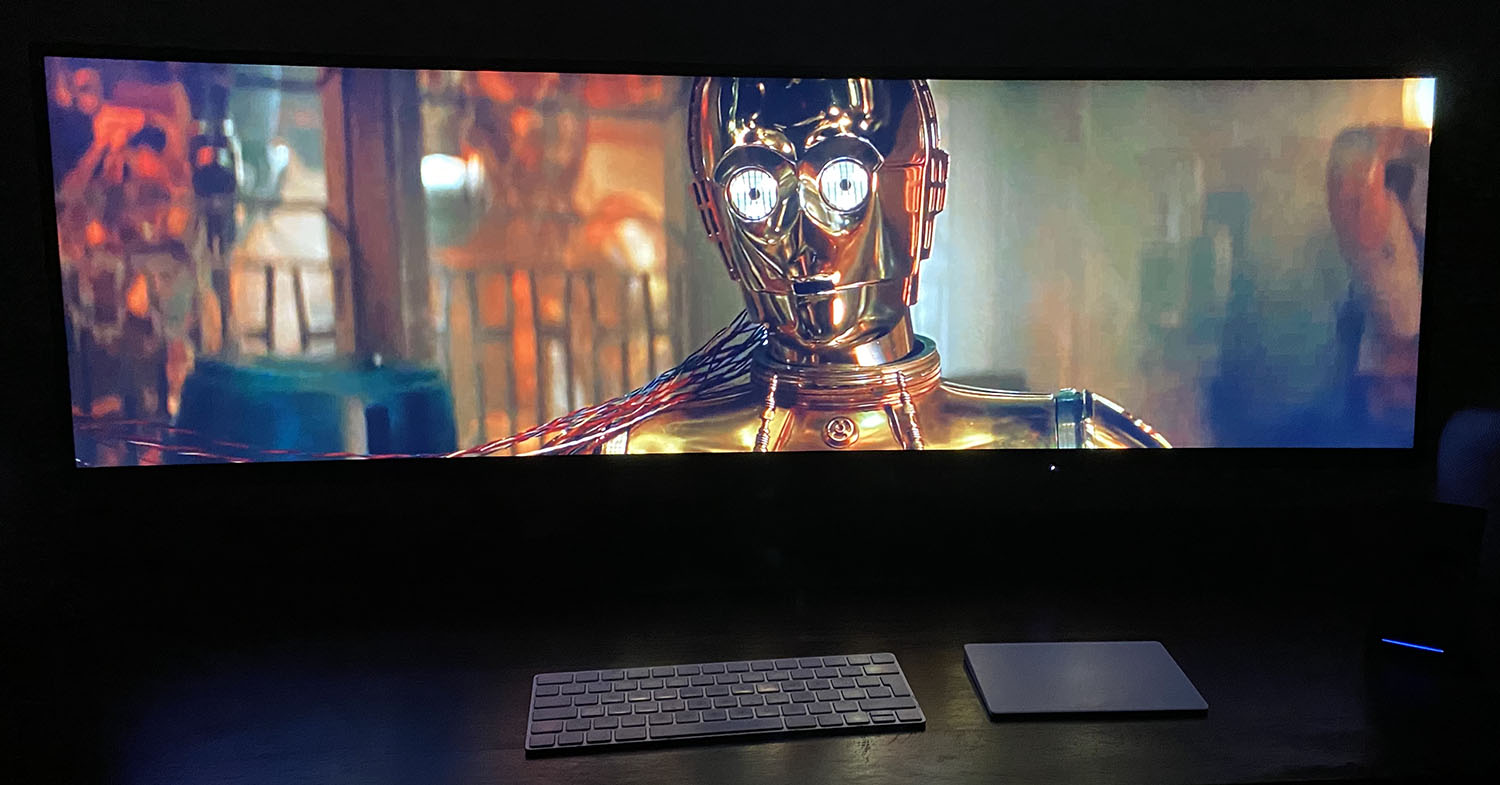 I have to say, if movies were shot in this format, this would be a truly phenomenal way to watch them!

Sadly, the 21:9 standard cinematic format looks rather ordinary – but it is still a decent experience. 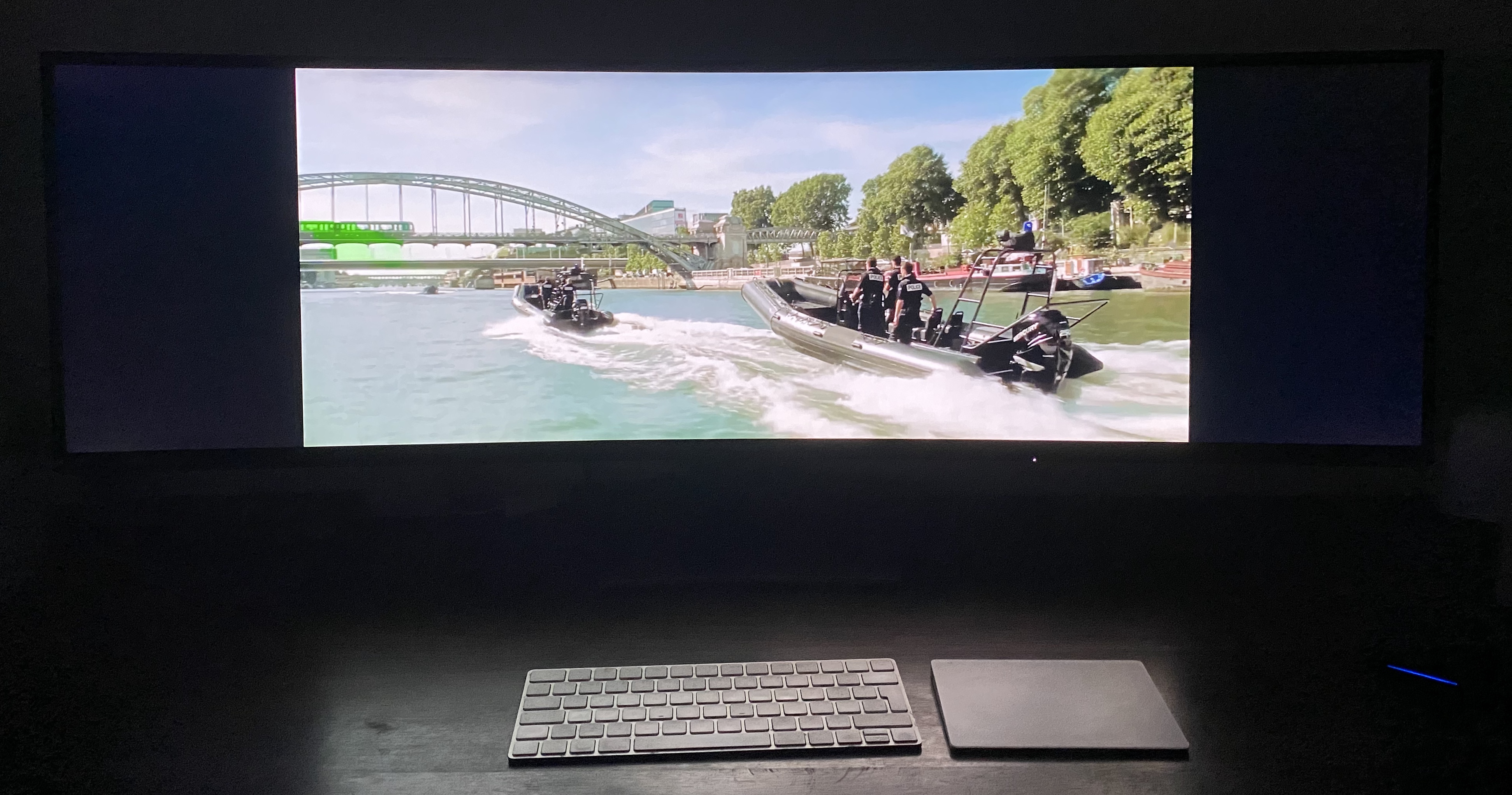 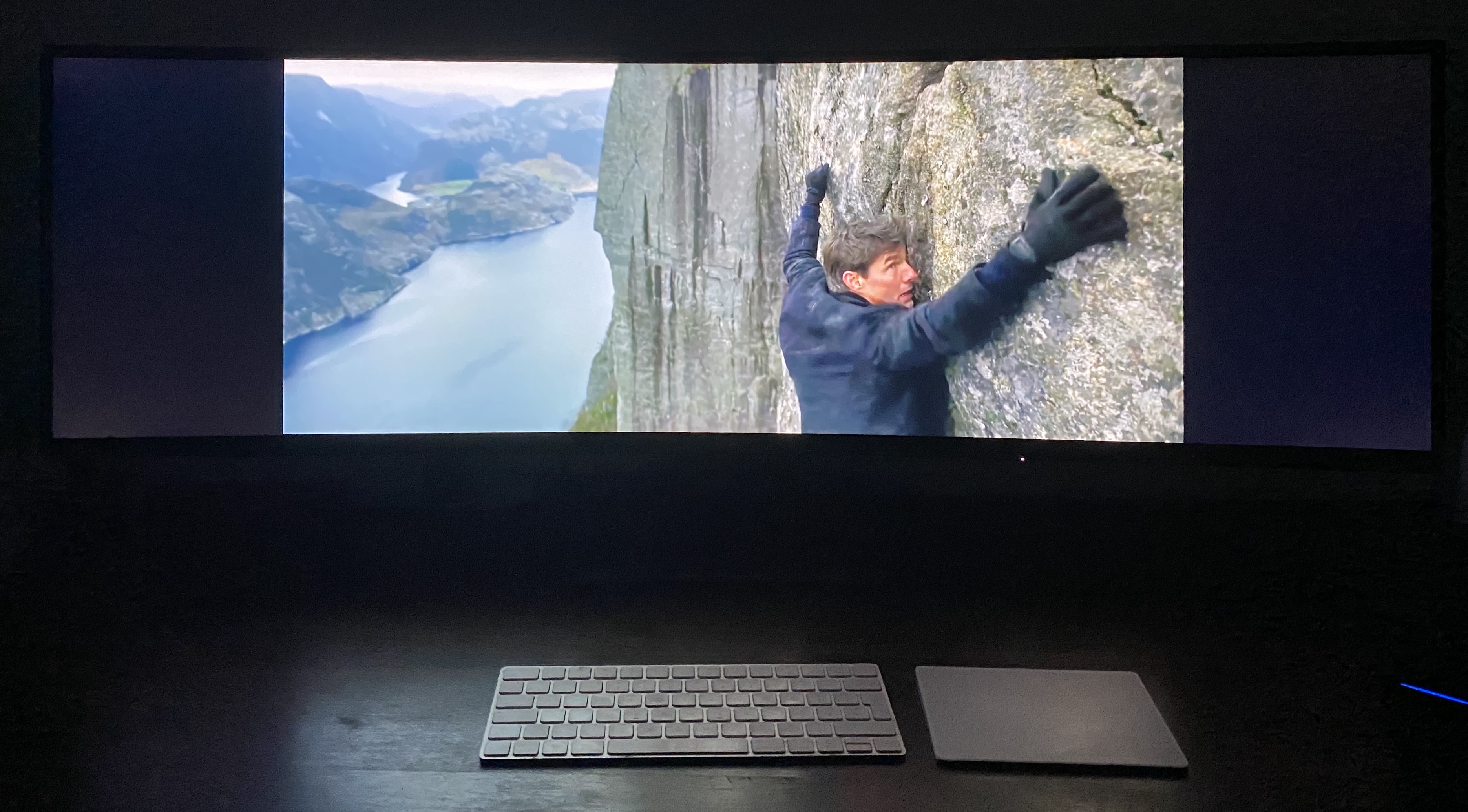 I’m not sure, though, that I’d bother relocating to the office to watch something on it. I haven’t had a telly for more than two decades, and rarely watch movies. I’m perfectly content watching Netflix on the MacBook Pro itself, even when both of us are watching, so you could say I’m not exactly the target market for a big-screen TV. All the same, if you’re looking for the monitor to double as a TV, I think it does a decent job.

I came into the office in the morning to see a warning. Er, well, hundreds of warnings, actually.

Possibly thousands, I’m not sure. I quickly grew tired of closing what appeared to be an infinite supply of them, and googled to find a solution (terminal command: killall NotificationCenter).

My Googling also revealed that I’m not the first Dell UltraSharp owner to have experienced this – but how it happened appears to be a mystery. When I checked System Preferences, somehow ‘Put hard disks to sleep when possible’ was unchecked in Energy Saving. I re-checked it and tested by putting the Mac to sleep manually, and it was then fine. Hopefully, that will be the end of the issue – I’ll know for sure after waking it from auto-sleep tomorrow.

I’m also trying an experiment. A reader, Sebastian, suggested I should switch on auto-hide for the dock, as there’s a lot of wasted vertical space either side of it – which is a good point.

I’ve not been keen on hiding the dock in the past, partly because I like to see the notification counts. But that isn’t really needed when all my main apps are visible all the time, so I tried it.

I do like the extra space it provides, and the cleaner desktop, but I’m finding the slight delay annoying – and also found that the target is so small (I like a small dock) that was easy to activate and then immediately lose it.

However, with the dock hidden most of the time, there’s no reason not to have a larger one, so I’m currently experimenting with auto-hide and a larger dock.

I did try a terminal command to switch off the dock animation, but that doesn’t seem to be the issue where speed of response is concerned.

Anyway, I’ll give it another day or two and report back next time. In the meantime, I’m not resizing my windows until I know whether I’m going to stick with this approach.

Other than that, the wow factor hasn’t worn off at all, and I’m still absolutely loving having so many apps visible at once. The box is still in my office, but I have put it all back together ready for its most likely destination: the recycling bin.