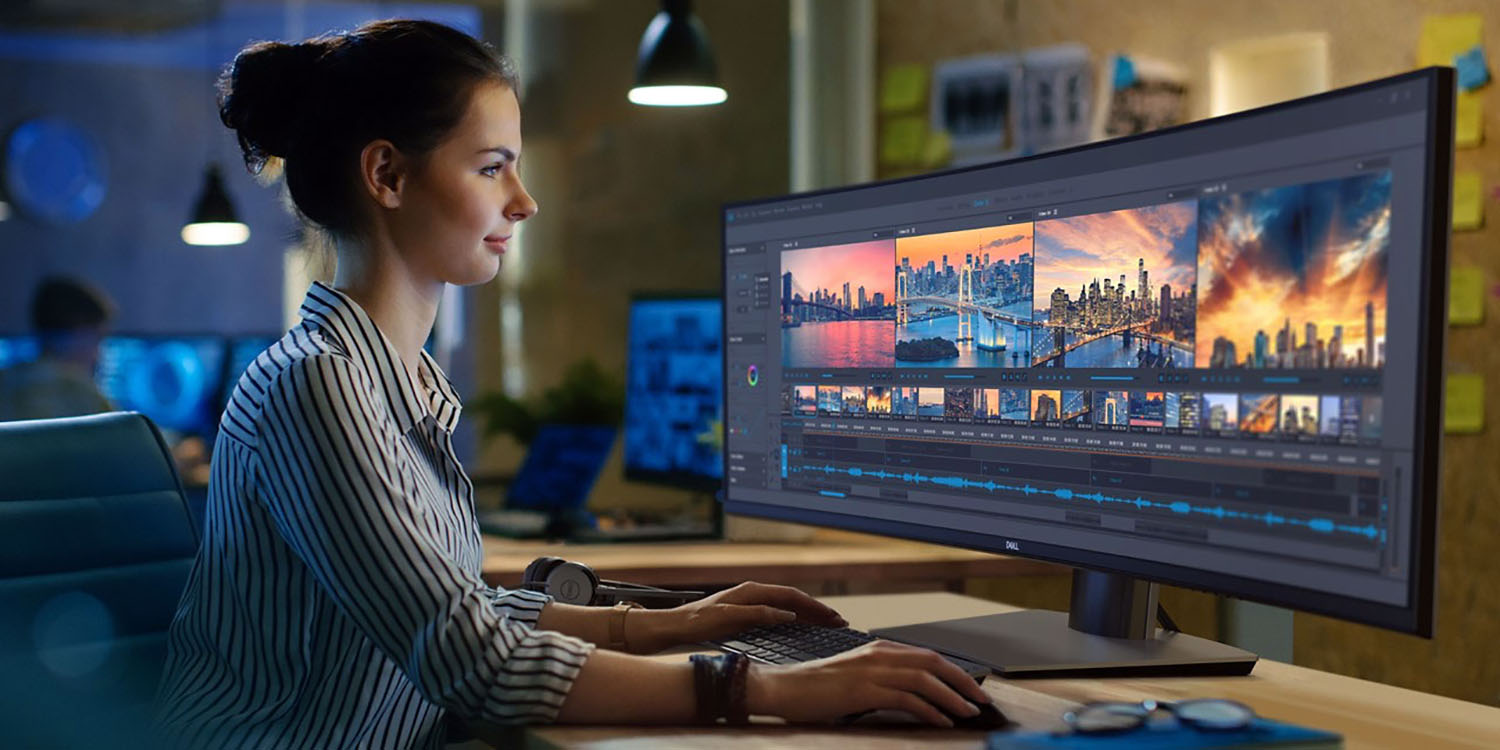 The Dell UltraSharp 49 is, by any standard, a fairly ridiculously-sized monitor. With a diagonal size of 49 inches, and a side-to-side width of four feet, it’s huge!

But … I’ve lusted after it ever since it was first announced. Today, I finally decided to press the button despite the fact that it doesn’t tick all of my boxes – but we’ll get to that …

I’ve been in love with the idea of a curved ultrawide monitor ever since I tried the BenQ’s EX3501R. That fell down in a number of areas, most notably that text wasn’t as sharp as it could be. That was a deal-breaker, but returning to a 27-inch Apple Thunderbolt Display afterward felt a little cramped.

Things got worse when that died, and wasn’t economically repairable. So for quite some time now, I’ve been using my 16-inch MacBook Pro display as my main monitor and my 12.9-inch iPad as a secondary one via Sidecar.

I have to say it works surprisingly well. As a travel setup for working from hotel rooms (insert wistful sigh here), it does the job. But as a full-time setup in my home office, it does feel very compromised.

I’ve been waiting a very long time indeed for my perfect monitor to come along, and it just hasn’t happened. My options, then, were to buy something to tide me over for a while or get something which, while not perfect, would be good enough that I’d be prepared to overlook its shortcomings.

I did consider the former approach – some kind of temporary stand-in, possibly even another Apple Thunderbolt Display – with the idea of reselling it for roughly the same price I paid a little way down the road. But given that literally three years have passed without my perfect monitor appearing, the second approach seemed to make more sense: just get the best I can now.

The monitor is essentially two 27-inch Apple Thunderbolt Displays side-by-side. It has the same 1440 vertical resolution, but 5120 horizontal pixels.

At 60Hz, it’s not a gaming monitor, but I’m not a gamer, so that’s fine. I might try a flight sim on it, and it should be good enough for that. Response time is a respectable 8ms, with a 5ms ‘fast mode’ – again, a gamer wouldn’t be happy, but that’s plenty for me.

It’s an IPS display with 350 nits brightness and a 1000:1 contrast ratio. Color gamut is 99% of sRGB, so photo and video pros can look away now, but since 99.99% of my photo editing is for on-screen viewing, not prints, that’s absolutely fine for me.

Horizontal and vertical viewing angles are both 178-degrees. Which is to say, this isn’t really a meaningful spec these days: all modern monitors are more than good enough for this not to be an issue.

Backlighting is WLED, and there’s an anti-glare coating.

There are no speakers, which may be an issue for some, but I use a stereo pair of HomePods as admittedly ridiculously-overspecced desk speakers, so no problem for me.

But some are compromises

I wanted Apple-standard aesthetics. This doesn’t have them, but given what you’re mostly looking at is all-screen, and I’m never going to see the back of it (my desk faces a wall), that’s not a big deal.

I wanted 4K. This isn’t quite, but the resolution should work well for my purposes – of which the main one is to have three spacious windows side-by-side.

The display has a gentle curve (3800R). Ideally, I’d like more – I really liked the much tighter 1800R curve of the BenQ. Given the size of the monitor, this feels like the biggest compromise to me, as I suspect I may find myself wheeling my chair from side-to-side at least a little; we’ll see.

Ideally, I’d have liked to have at least one downstream USB-C port. There isn’t one, but it does have four USB 3.0 ports, so that’s good enough.

But when you consider that Apple continued to sell the ATD 27 for $999 right up to its discontinuation, and you’d still pay around $500 to pick up a mint-condition one today, it puts the price in perspective.

Of course, there are zillions of cheap monitors out there – but size and resolution still costs money. There aren’t many 49-inch monitors out there, and once you start comparing specs, the Dell looks very good value for the money. Samsung, for example, offers the CJ890, but the resolution is ‘just’ 3840×1080. Philips has the 499P9H, with the same resolution as the Dell and a tighter curve, but that’s over $1,600.

For what you’re getting, this seems expensive but reasonable.

Of course, this is so far all theory. I’d been hoping to get one for review, so I could try it before buying, but that seems to be taking forever, so I decided just to bite the bullet.

At four feet wide, the Dell UltraSharp 49 will take up most of the 5.5-foot width of my desk – leaving just enough room for the MacBook Pro in a stand, and the two HomePods at either side. I’m expecting it to look huge but not out of proportion for the desk.

My working day is generally spent with two browser windows (one for WordPress, another for source material) and a Slack chat one. My thinking is I’ll position the WordPress window in the center, second browser to the left, and Slack chat on the right. This is a different setup to the one I’ve used so far, but I think the sheer physical size will mean I’ll want my main window right in the center.

I’m expecting it to be an absolute dream for video editing! That will perhaps kick-start me into a video project I have in mind once the lockdown eases.

I’ll, of course, be writing a first-impressions piece when it arrives next week, and a follow-up piece once I’ve made a final decision on whether or not to keep it.

What’s your view? Crazy size, or dream monitor? Please share your thoughts in the comments.